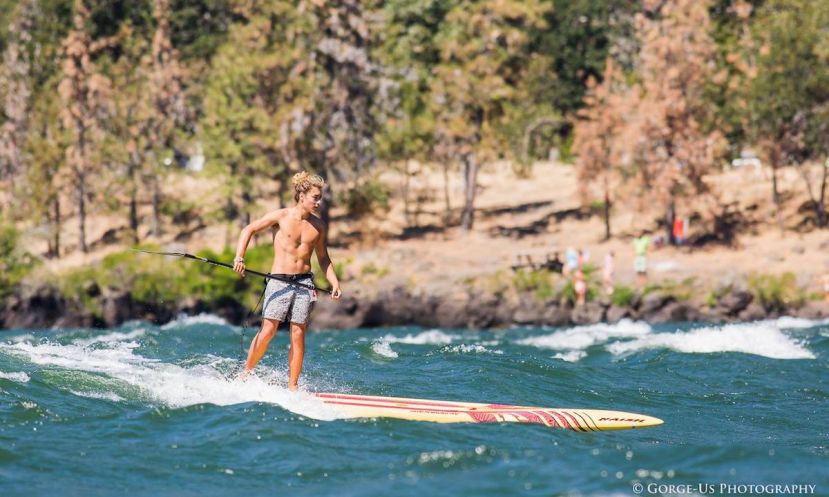 HOOD RIVER, Oregon - The Naish Columbia Gorge Paddle Challenge (CGPC) is a Festival celebrating the sport of Stand Up Paddling in the beautiful Columbia River Gorge. The 7th annual event took place over the weekend and was met with one of the most stacked fields of competitors that we’ll see this year, plus some surprising results among a health scare.

Day one of the event on Saturday hosted the most anticipated (and fun) part of the Columbia Gorge Paddle Challenge: the Double Down Downwinder. The 7-mile course takes you on one of the best downwinders in the world and you get to do it not once, but twice with your two times adding together for your final time.

Hood River local Fiona Wylde dominated the course on both runs finishing minutes ahead of her nearest competitors on both runs. Local knowledge definitely plays to her advantage here in Hood River and it definitely showed. Behind her in second was Annabel Anderson and youngin’ Annie Reickert in third.

The mens division saw Bernd Roediger (Naish) take the win ahead of some of the heaviest hitters in the game: Travis Grant and Titouan Puyo (NSP). Roediger is no stranger to downwind paddling as he comes from one of downwind paddling’s meccas: Maui. Roediger was able to find a good rhythm on both of his runs and was able to clinch the win on day 1.

Also on day one the downwind course saw a new division hit the water: SUP Foiling. In a surprising finish the teen-aged Spencer brothers, Jeffrey and Finn, took the top two spots over Kai Lenny who took 3rd.

Day two was another beautiful day in Hood River that greeted paddlers with beautiful but tough conditions for the course racing. With winds hailing towards paddlers for a good portion of the race stamina and endurance were key in finding success. Depositing funds on your account using PayPal is really simple and straightforward https://www.topnewcasinos.co.uk/paypal-casinos.

After a hard fought battle both Annabel Anderson and Titouan Puyo were the champions of the day, fighting off not only their competitors but also the head/side winds. Anderson, who has won this event many times in the past, was just as thrilled to win once again in Hood River, proving to herself that she remains one of the best female stand up paddlers in the world. Following Anderson in second was fellow Kiwi Penelope Strickland and behind her in third was none other than Candice Appleby. For the guys, Lincoln Dews and Arthur Arutkin came in second and third place respectively.

In a scary moment at the finish line of the race Fiona Wylde collapsed and was rushed to the hospital. Many thought it was due to low blood sugar as the athlete lives with type 1 diabetes but it ended up being a full-on body cramp as Wylde explained on her Facebook account. So glad Ms. Wylde is okay and doing well following the incident.

All in all it was another incredible year in Hood River, Oregon at the 7th annual Naish Columbia Gorge Paddle Challenge. Congratulations to all competitors in putting on a spectacular show!