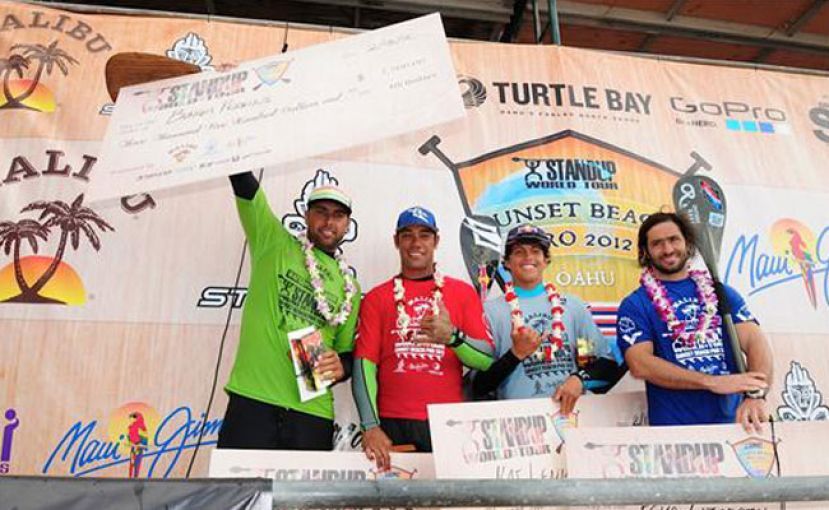 OAHU, Hawaii – In one of the most dramatic and exciting Finals yet for the Stand Up World Tour, Bonga Perkins digs deep in the last minute of the heat to edge ahead of Kai Lenny (Naish) by the smallest of margins and take victory here at stop 1, the Sunset Beach Pro presented by Malibu and Starboard and in association with Maui Jim eyewear. Bonga was one of the on form surfers throughout the event, showcasing why he has multiple World Titles to his name in Ocean Sports and is one of the most respected 'Watermn' in the world. After a 5th in 2010 and 2011, Bonga started the Finals with a strong wave that culminated in one of the few barrels of the day, and then ended it with a couple of impossible turns that clinched the win for him, despite having lost his paddle for much of the heat. A worthy Champion to say the least.

1. Kai Lenny turns it on in the Final heat of the day

Kai Lenny (Naish) stepped up in the Final to put on an incredible display of surfing from start to finish, clearly showcasing why he is not only 2x World Champion, but also 2x Sunset Beach Pro Champion at the young age of 19. In one of the most fiercely contested Finals in some of the most impressive conditions imaginable, Kai led the heat with a string of impressive rides and missed out on the victory by less than 0.6.

2. Peyo Lizarazu impresses the world with his power turns

Peyo Lizarazu was another on form surfer throughout the event, putting together some incredible rides and always impressing the judges and crowds alike with his powerful backhand turns that have made him famous, as well as negotiating some of the biggest waves of the day. As his first event since his win back in Tahiti in 2011, Peyo will once again be someone to watch out for in 2012, as the Stand Up World Tour is now officially rolling following a spectacular start.

Ikaika Kalama (Rogue) makes another final on the Stand Up World Tour at home here in Hawaii, showcasing not only his skill, but his local knoweldge in the powerful and full size Sunset Beach surf. Ikaika's wave selection and lecture led him through the draw alongside Kai Lenny, to advance all the way to the Finals to finish in a very close 4th place.

Sean Poynter (Starboard) deservedly earns the most committed surfer award at the Sunset Beach Pro presented by Malibu and Starboard and in association with Maui Jim as a result of his approach to surfing in the large and powerful surf at Sunset. Sean put together critical turns and pulled into barrels, sitting the deepest and always placing himself in the most committed position throughout the event. Sean wins a stay at Turtle Bay Resort, a pair of Maui Jims but also a well deserved 5th place for the event, narrowly missing out on his berth in the Finals.

Young Caio Vaz (Art in Surf), who finished 5th place in the Hawaii Island Finals in 2011, secures another semi final finish with some great surfing throughout the event. Caio also pulled into one of the best barrels of the contest earning universal respect, but also strengthening his position on the Stand Up World Tour and establishing himself as one of Brazil's leading lights.

Other incredible performances at the 2012 Sunset Beach Pro presented by Malibu and Starboard and in conjunction with Maui Jim included young Frenchman, Benoit Carpentier (Naish), who won the Na Kama Kai Youth Challenge, but also battled his way through the Trials, into the Main Event and onto the QuarterFinals. An amazing achievement for this young talent who is showing phenomenal promise for the future here on the Stand Up World Tour. Also standing out was Duane DeSoto, who battled Bonga Perkins through the draw, catching some of the biggest sets of the day, and firmly re-establishing himself as a major contender on the Stand Up World Tour. Chuck Patterson (Naish) also stood out in the sizeable surf, making his way all the way through the trials to earn his spot in the semi finals, as did newcomer Beau Nixon from Australia, making a name for himself here at stop one on the 2012 Stand Up World Tour. There was so much more talent and exceptional performances throughout the event, it is impossible to touch on them all, but highlights, photos and full report will follow at www.standupworldtour.com.

7. Watch the highlights, read the stories and check out shots

A lot more to come at www.standupworldtour.com from the 2012 Sunset Beach Pro presented by Malibu and Starboard and in association with Maui JIm. So go and check out the latest news and highlights, as well GoPro insights into some of the leading athletes on the Stand up World Tour. Also, stay tuned for the global broadcasts of the Sunset Beach Pro that will air on NBC, Universal, Fuel TV Australia, Eurosport and many more global networks. So a big Mahalo to our sponsors and to our athletes who put on mindblowing performances all week at the Sunset Beach Pro. A big Mahalo also to the Sunset Beach Community for allowing us to hold this prestigious event on their shores that now in its 3rd year, has further established itself as the ultimate starting point for the Tour, and an impressive showcase of high performance Stand Up Paddlesurfing.

2012 was without doubt the best yet, as Sunset Beach served up some of the most beautiful conditions imaginable for what was a fitting opener to the 2012 season. It proved that patience did pay off, as Sunset saved the best till last and provided an unparalleled spectacle. Next up will be the La Torche Pro in NW France, so stay tuned as we prepare for the European leg of the Stand up World Tour that will take place at the end of April in Brittany. From all of us here at the Stand Up World Tour, thanks for watching and Aloha.