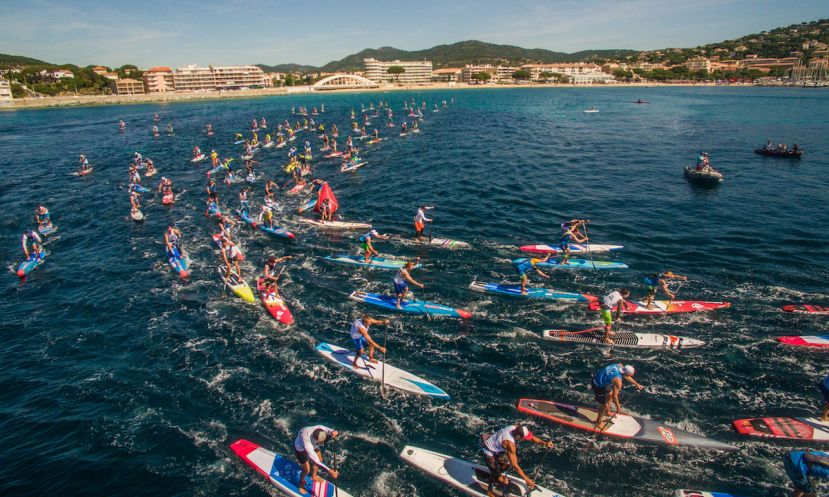 SAINTE MAXIME, France - The EuroTour is in full force and the Starboard SUP race team has been showing up and delivering. Athletes Leo Nika & Penelope Strickland took out stop #1 in Crete, Greece and Bruno Hasulyo took the top spot of the podium at stop #2 at Numur, Belgium.

The next stop took the paddlers to the Mediterranean for the iconic SUP Race Cup in Sainte-Maxime. There is no more established race in Europe with The SUP Race Cup running every summer since 2009, making this year’s event the 9th annual edition. Taking in the beauty of the French Riviera (St. Maxime sits across the bay from the iconic St. Tropez) this event is as much a holiday as it is a race.

Starboard athletes Micheal Booth (Australia) and Sonni Hönscheid (Germany) announced their arrival to the EuroTour at stop #3: the SUP Race Cup in beautiful Sainte Maxime, France by taking out top podium spots, both with convincing wins.

"Sainte Maxime is a special place for me as it was the first international distance race I won. After coming off a couple of disappointing results in the USA and Japan I was extremely happy to take the overall this year at stop 3 of the Euro Tour,” said Micheal Booth. Booth continued, “It was an important win and confidence booster for me and I'm looking forward to the rest of the Tour. The competition amongst the men is getting stronger all the time and it's exciting to be back in Europe.”

"It was really nice to come back to Sainte Maxime, to race in the crystal clear waters of the côte d'azur,” said event winner for the ladies, Sonni Honscheid. She continued, “For the technical race we had hard conditions, the strong wind made it challenging. I was paddling on the Allstar, the perfect for that kind of race and conditions, being able to take the lead before the first buoy and winning 2 min in front of my teammate Olivia. The second day was the Long distance - the forecast just predicted really light winds, perfect for the "sprint". The start was crazy, a lot of chops and collisions. Being a long race, I stayed calm paddling for the first buoy searching for clean water after and finally I was able to get into my own rhythm. I'm really happy to win this race. Congratulations also to Olivia and the rest of the Starboard Team for their performances! Ready for the next race!”

An event highlights reel video has been put together, courtesy of Georgia Schofield. Check it out below.

To see more news from the Euro Tour, click HERE.