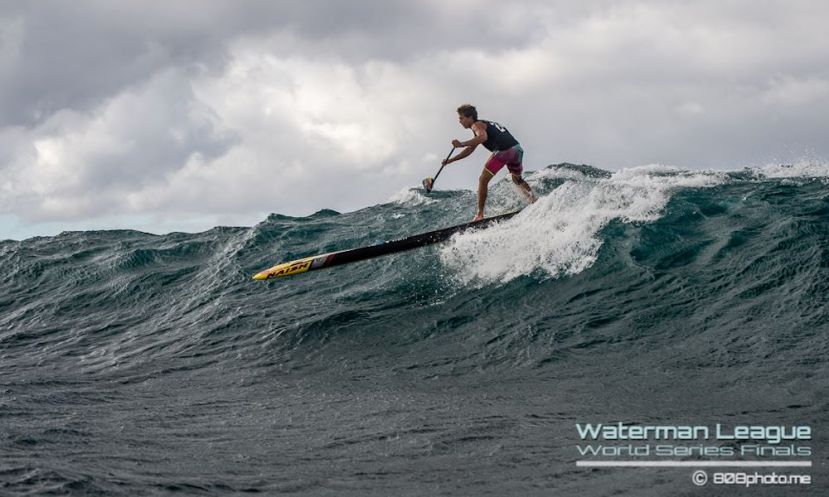 MAUI, Hawaii - This past weekend of racing proved to be nothing short of spectacular, as ideal downwind conditions on Day 1 for the World famous Maliko run came together with pumping surf at what can only now be regarded as the ultimate arena for Surf Racing (Ho'okipa Beach Park) for a show like no other, with non-stop entertainment. As expected, the Maui Boys revelled in the opportunity to perform in front of a home crowd and in conditions that they know better than anyone. It was therefore no surprise that Kai Lenny (Naish) showed up raring to go, as the conditions delivered in every way possible.

In one of the most competitive downwind runs in a long time, Kai and Connor Baxter (Starboard) traded bump for bump down the beautiful course that follows Maui's North Shore, with Connor just getting the edge coming into the finish line to take victory on Day 1, forcing Kai to settle for 2nd. (Check out the highlights below.)

Coming into Day 2, with a rising swell and lighter winds, the scene was set for an epic showdown, as Kai stepped up to do battle with his peers at his home break. With some impressive performances throughout the rounds and some specatcular rides, Kai ended up having to settle for 3rd place in a closely fought final that saw its fair share of carnage. (Check out the highlights below.)

With a 2nd and 3rd place across the 2 days of racing, Kai was able to secure the World Series Finals victory on Maui, strengthening his position in the World rankings, now sitting in 3rd place overall.

With all eyes now on San Francisco for the final challenge of the season at the Red Bull Heavy Water event set to kick off in the morning (October 18th), this will be Kai's last chance to make a comeback and continue his ascension up the leaderboard. Stay tuned for live updates and highlights from this groundbreaking event to be held at one of California's most notorious waves both at www.watermanleague.com and www.facebook.com/standupworldseries 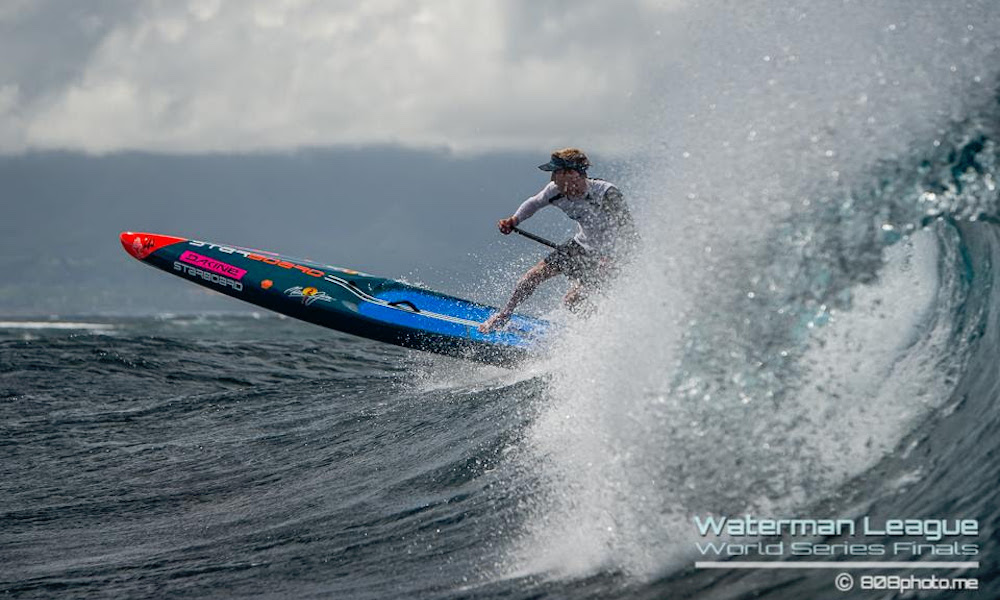 Like Kai Lenny (Naish), Connor Baxter (Starboard) revelled in the opportunity to return home to race in his own backyard and especially to compete on a race course that has seen him so dominant over the past few years. As expected, Connor put on a stellar performance on the Maliko run, battling with Kai for much of the way, but breaking away in the final stages of the race to secure the well deserved victory.

Day 2 saw a confidant performance from the 2014 World Champion, progressing through to the Finals comfortably and looking right at home in the intense conditions on tap at Ho'okipa. In the final however, the top two were able to break away, leaving Connor, James Casey (JP Australia) and Kai to battle for position through the mid to latter stage of the course.

The inside ledge at Ho'okipa provided a stumbling block and both Connor and James went down, allowing the athletes behind to take advantage. While it wasn't the finish that Connor wanted (7th place in the sprints), it was enough to secure him 2nd place overall for the World Series Finals on Maui and propel him into lead in the World Series Rankings for 2016. This means that Connor will be wearing the yellow jersey coming into Red Bull Heavy Water on Tuesday, with a 750 point lead over fellow contender, Casper Steinfath (Naish) from Denmark. The Red Bull Heavy Water event provides an opportunity for athletes to replace one of their long distance races with this result should they do well, so in essence somewhat of a wildcard event, as we break ground with this new concept.

Stay tuned to watermanleague.com and the World Series Facebook page for more on Red Bull Heavy Water as it is set to kick off in just a matter of hours. 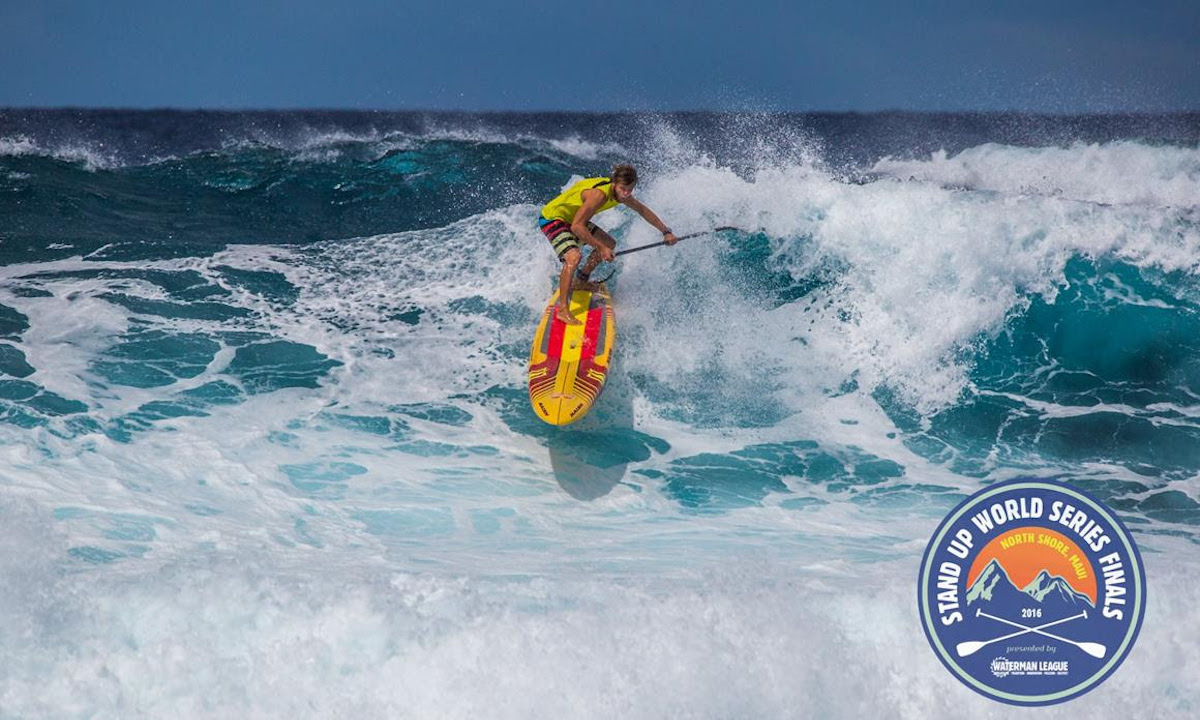 Casper Steinfath takes on the Maui locals on their home turf and comes out on top in the Sprint Racing, finishing in 3rd overall. | Photo: Waterman League

Casper Steinfath came into this event in the yellow jersey and it all to play for on the beautiful island of Maui, and he was fired up and ready to take on the challenge. Despite an 8th place finish in the long distance, Casper kicked off his Sprint Racing campaign with powerful and dominant performances, progressing his way through the rounds towards the final.

Unfortunately, disaster struck during his semi final heat where we saw Casper go down on the first lap, losing vital ground to his competitors forcing him to be relegated to the Consolation Final. With the Top 2 spots earning their place in the Finals, Casper did not hide his overwhelming ambition to make it back into the running, with a dominant performance that earned him the first of two spots in the Final. While for some, this might have been a morale hit to have to compete in an additional round, zapping their already diminishing energy, for Casper it seemed, it only made him hungrier and more motivated, as he powered his way around the course to take the win ahead of a star studded cast of characters.

This win in the sprints combined with his long distance result puts him in 3rd overall for the event, and keeps him very much in striking distance of Connor Baxter, as Casper will be looking for a strong finish in this final challenge of the year. 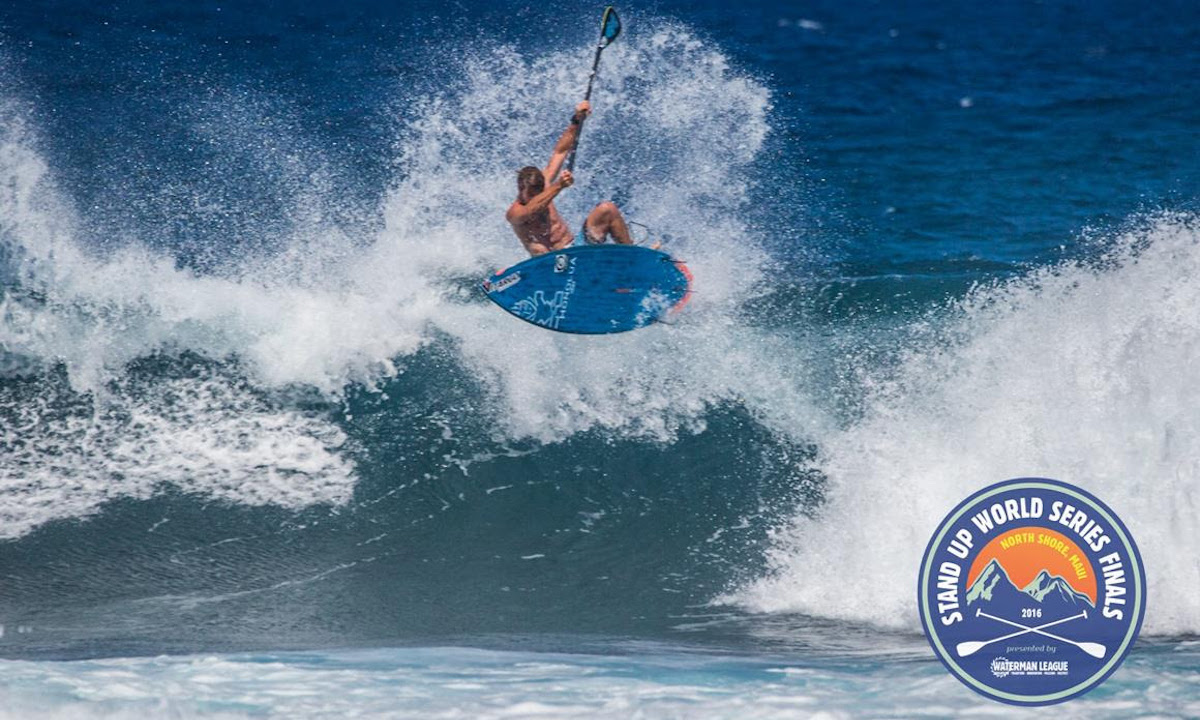 Zane Schweitzer (Starboard) is without doubt one of the most charismatic characters on Tour, with a radically impressive amount of talent and energy that he applies to his surfing and life in general. After a quieter year for Zane on the Racing front, he was without doubt looking for a strong finish for the season at home here in Maui, particularly with the new arena for Surf Racing at Ho'okipa that suits his strengths perhaps more than anyone.

After a 9th place in the Downwind run from Maliko, Zane attacked the sprints like his life depended on it and strung together some impressive performances throughout the elimination to earn a well deserved 2nd place in the sprints and 5th place overall for the event.

True to Zane's impressive level of energy, he also took part in and dominated the Open Surf Exhibition with some of the most progressive and radical maneuvers imaginable in the skate park like conditions on offer at Ho'okipa. With the best maneuver format being adopted for this exhibition, the decision amongst the judges was unanimous, as Zane added another feather to his cap in the world of SUP Surfing, as he will build up to what will be a full year of action for the World Tour in 2017. 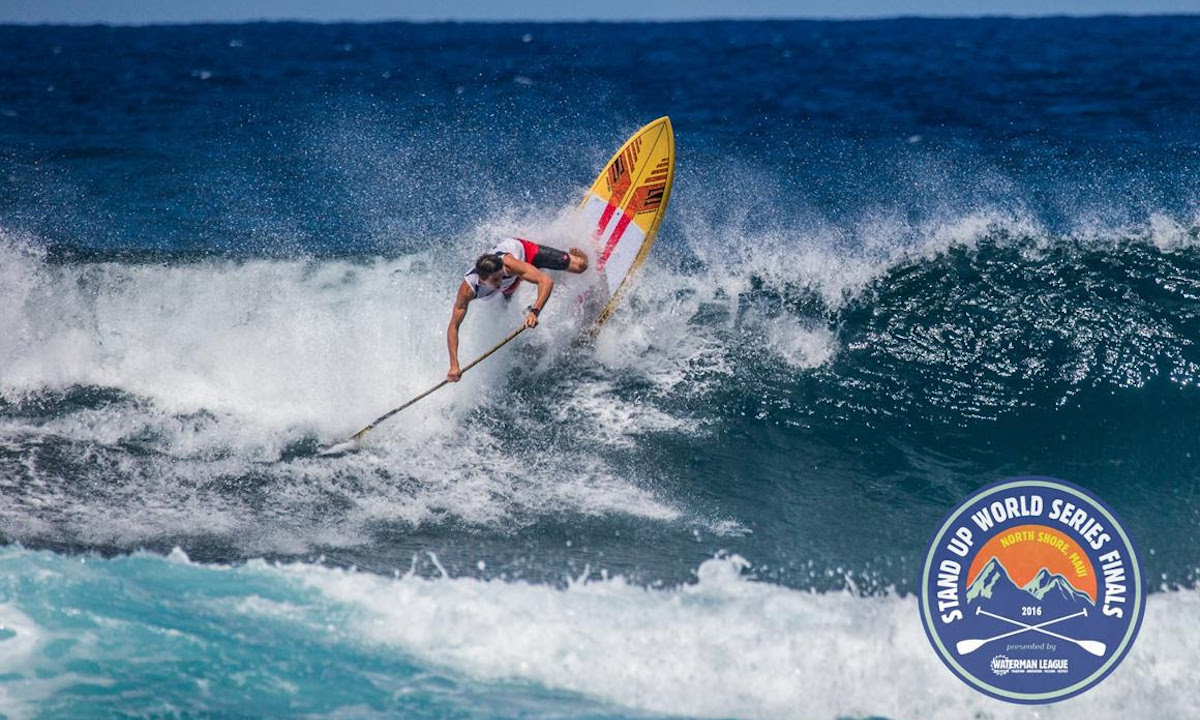 Kody Kerbox (Naish) was another Maui boy overjoyed at the prospect of the World Series coming to Maui and competing in front of a home crowd and took the opportunity seriously. After an impressive 3rd place finish in the Long distance race, Kody then transitioned into the Open Surfing Exhibition seamlessly, putting together some of the most fluid and radical surfing of the day, in particular on his backhand.

He then focused back on the racing, with a strong performance throughout the day, but just falling short in the quarters leaving him in 13th place in the sprints and 8th place overall. Kody is always a consummate professional and clearly showcased his versatility and skill over a full weekend of action at home in Maui. Stay tuned for more highlights at watermanleague.com

While the move to Maui came late in the day and it served as a foundation year for what is to come in 2017 and beyond, the location proved itself second to none in terms of the very best conditions you could imagine for both downwind and surf sprint racing. We also felt and appreciated the support of the Community and the appreciation of the show that was put on by the World's best this past Sunday at Ho'okipa, where we saw a new performance bar being set for Surf Racing.

We are extremely thankful to the surf and paddling community on Maui for the opportunity to showcase the sport at its very best, not to mention our proud sponsors of the World Series Finals: Maui Brewing Company, Raw Elements, Rock & Brews, Kona Deep, Nalu Kai Lodge, Kuau Store and Na Kama Kai. We can't wait to return to Maui next year as part of the 2017 World Championship Tour.