The 2012 Rocky Mountain Surf Festival will once again be held at the world famous Glenwood Springs Whitewater Park in Colorado. Visit Event's website for details of the stand up paddle races and contests. 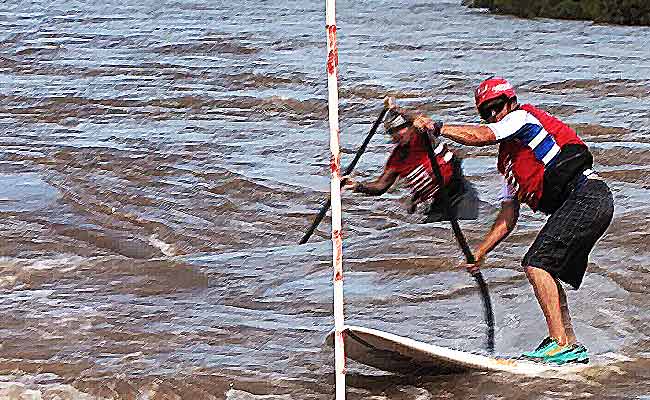 Dan Gavere (right) and Charlie McArthur (left) battling it out at the Supcross race.

GLENWOOD SPRINGS, Colorado – The 2012 Rocky Mountain Surf Festival will once again be held at the world famous Glenwood Springs Whitewater Park in Colorado. This one of a kind Polynesian themed extravaganza will feature surfing contests, music, food and product vendors, costumes, a hula contest, limbo events, a Goof Board competition, a floating parade of rafts punching the monster wave/hole and the world’s best river stand up paddlers displaying their paddling prowess on the snowmelt swollen Colorado River. The weekend includes nonstop action on both sides of the river. Festivalgoers migrate back and forth across the bridge from kid friendly activities held at the park’s stadium seating to the event beer garden, sponsors’ and food vendor’s tents and the event HQ and surf judging zone.

The downriver will be a timed event starting just above the whitewater park and proceeding 3 miles (appox.) downriver to the “South Canyon” takeout. The race will feature a mass start from the eddy above the wave in each division. Competitors will entertain the festival-goers as they charge through Glenwood Springs famous rip roaring river feature. After the race, competitors will head back up to the park for the next round of stand up paddling action.

The SUPCROSS will also take place whitewater park. This crash and burn packed event is similar to Boardercross on snow. Racers will be seeded by their times in the Downriver and will compete in knock out heats made up of 4 competitors. The competitors will line up at the launch site and with a mass start have to paddle upriver and around a gate then peal out into the main current. The race continues through the G-Wave and then the competitors have to eddy out and negotiate an upstream gate before charging downriver to the finish line a short ways downstream. This unique event was a crowd favorite last year as competitor carnage was prevalent.

The Glenwood Springs Whitewater Park will be the hub of activity throughout the festival. Sponsors' and vendors' tents including local food vendors selling sorbet, smoothies, and pork sandwiches and live music will feed and entertain the throngs at this Hawaiian-themed two-day long party. Hula hooping in hula skirts with Betty Hoops (www.bettyhoops.com), goof boarding (www.goofboard.com ), music, a beer garden, limbo contests and a major two day long surf session will entertain the crowds at this one of a kind festival. Both days will be surf central as surfers (stand up, short and long boarders), boogie boarders and kayakers rip up the world’s best river wave/hole. Additionally river enthusiasts from everywhere will be invited to paddle down the mighty Colorado River to this riverside rage. Costumes will be encouraged with spot prizes awarded to the festival- goers with the most outrageous outfits. Palm trees on each side of the stage and plentiful leis and hula skirts will enhance the tropical mountain atmosphere of this truly unique event.

The championship’s climax will be an amazing surfing contest on the world famous wave at the Glenwood Springs Whitewater Park. Each stand up paddler will get 3 - 1 minute rides with the surfer’s best score being counted towards their final results. The overall champion(s) will be determined by a point system with scoring accrued during the 3 different events. Additionally, before the climactic event, traditional surfboard contests will be held – the world’s second annual River Surf Championship will wow the crowd with amazing river surfing action. Both short and long board competitions and a goof board event (the Great Goof Off) will keep the crowd entertained throughout the day. This festival will associate your product with an outrageously fun and different event at the inland surfing capitol of the world, Glenwood Springs. After the SUP surf contest, the championship’s award ceremony will be held and the après event party will kick into high gear. Dancing, drinking and feasting will turn the Glenwood Springs Whitewater Park into an inland surf & party paradise during this nonpareil event – the Rocky Mountain Surf Festival.

The River Surfing Championship is the world’s first river surfing championship. This unique event will be held right before the final competition in the Whitewater Stand Up Paddling Championship. The event features a long (over 9 ft.) and short (under 9 ft.) surfboard competition on the famous Glenwood Springs wave. A panel of expert judges score the competitors’ rides for style and tricks including cutbacks, cross stepping, switch stance, hang 5s, head stands, one foot surfing, ollies and many others.

The event coordinators are happy to work with the Presenting Sponsor to create any cross promotions you would like to implement in conjunction with the festival. All profits (after expenses) from beer sales at the festival’s beer garden will go to a non-profit organization. The festival will once again raise funds for a great cause. Additionally, booth(s) from river-oriented non-profits will be set up on site and staffers will be on hand to educate the festivalgoers on pertinent riparian river issues. The event coordinators have organized another river clean up in conjunction with the event. Event staff and volunteers will scour the riverbanks upstream and downstream of the whitewater activity area for trash. And of course, after the event ends, event staff will make sure that the Glenwood Springs Whitewater Activity Area is entirely trash free. Also, recycling receptacles will be prominent throughout the venue with a premier placed on minimizing waste.

Charlie is the founder of the Aspen Kayak & SUP Academy. With over twenty years of teaching experience, Charlie has taught hundreds of people to safely become kayakers and now he runs the premier river stand up paddle school in the country. Charlie has kayaked many rivers as well; paddling first descents on the Roaring Fork, Crystal River and rivers in Hawai’i. He also has many first place finishes in extreme downriver races on the Gore section of the Colorado River and has raced a surf ski in the prestigious 36 mile open ocean Moloka’i Channel race. Charlie starred in numerous whitewater videos and TV shows and has been featured in a number of high-circulation magazines. His latest passion is stand up paddling the rivers and his kayak academy was the first school in the world to offer river SUP lessons. The aloha spirit is alive and growing on the rivers of the world thanks to “C-Mac.”

EnviroAction Productions (EAP) is a full service video production and event coordination company based in the Aspen area. Since 1995 EAP has been coordinating events and filming and producing TV segments, corporate events and action sports adventures. EAP coordinated the Gore Canyon Festival for many years, brought the US Open Mountainboarding Championship to CO, and recently created the Whitewater Stand Up Paddling Championship. Founder Paul Tefft is an action sports athlete who has been featured in multiple magazines and a diverse array of TV shows, TV commercials and movies including Warren Miller films and the news program Extra. Paul’s event experience goes back a long way, he even coordinated Aspen’s first ever snowboarding halfpipe event at Snowmass Ski Area in the late 1980’s. Additionally he worked as the Special Event Coordinator for the Treble Cone Ski Area in New Zealand for three years and coordinated the NZ Snowboarding Championships which was filmed for a series of three TV shows.

What do you think about standup paddle boarding in whitewater?