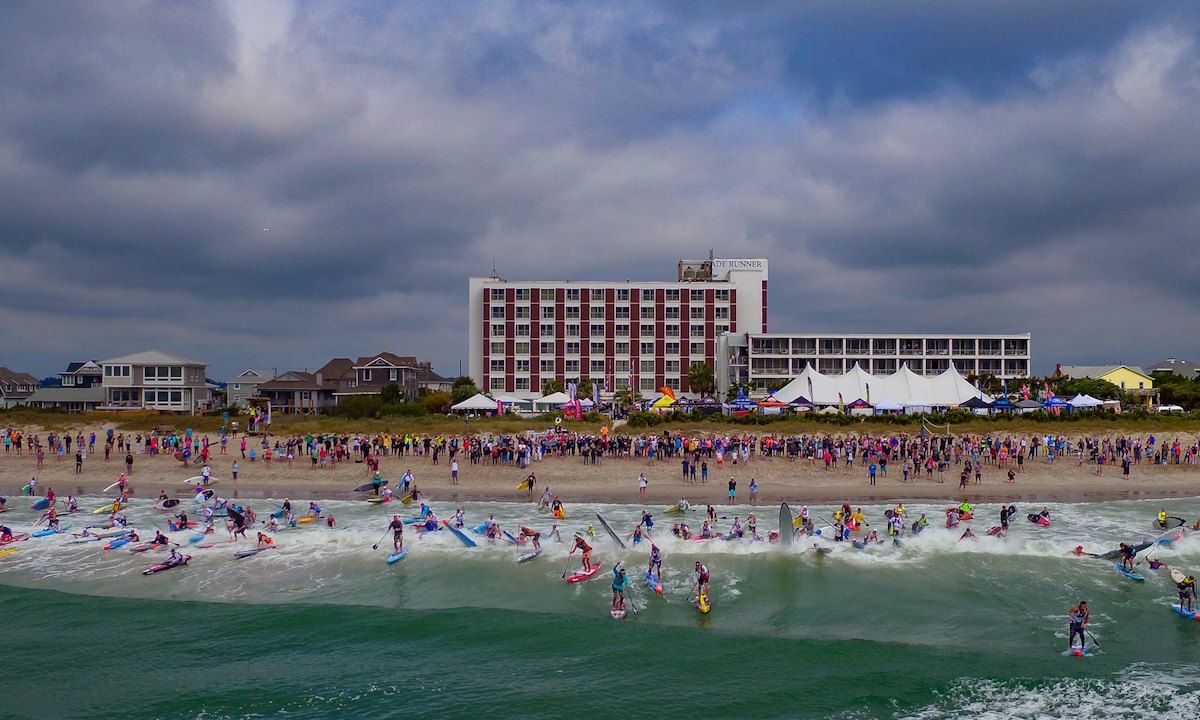 WRIGHTSVILLE BEACH, North Carolina - This past weekend kicked off the first big race of the 2016 stand up paddle race season at the West Marine Carolina Cup presented by Surftech and it was more exciting than ever. Hundreds of paddlers took to the water and made for one of the most exciting and competitive fields we’ve seen in awhile. The Carolina Cup has become known for its incredibly difficult elite race known as the Graveyard course which is a 13-mile paddle in a variety of conditions that in recent years has attracted the best stand up paddlers in the world who come and seek to conquer the Graveyard. This year was no different and top names in the sport such as Danny Ching, Tituoan Puyo, Travis Grant, Sonni Honscheid, Annabel Anderson and Candice Appleby all showed up this year hoping to take top honors in the elite race.

Before and during the start of the Elite men's race. | Photos Courtesy: Wrightsville Beach Paddle Club

The start of the men’s race was action-packed as a small set came in right at the start making for some tricky conditions. In the beginning it was Chuck Glynn who had the lead for the first couple of miles but was then taken over by NSP’s Tituoan Puyo who then held the lead for the majority of the race from then-on. The leading pack had close to 19 guys in it all battling for the top spot. In the remaining few miles left in the race, Tituoan broke away from the pack and was able to get himself a slight lead of about ten board lengths and held it all the way to the end when he was able to catch a victory wave in to the beach. Tituoan didn’t win easily though as 2015 champion and fellow NSP teammate Travis Grant and 3x Carolina Cup champ Danny Ching were hot on his heels for the entire race.

The ladies started shortly after the men’s start and it was just as exciting as ever. The duel between rivals Annabel Anderson and Candice Appleby, who rarely meet each other in races (only a few times a year), had the crowd filled with anticipation to see if either of the ladies would come out on top. It was anyone’s game this year though as the women’s field was was filled with heavy hitters in the sport, everyone from Candice and Annabel to SIC Maui’s Sonni Honscheid and Lina Augaitis (who recently gave birth to her son Tav) and Starboard’s Fiona Wylde who has proven herself among the ranks over the last year. Pretty early on in the race, Annabel Anderson slowly started gaining more and more of a lead and by the end of the race she held more than a five-minute lead over the rest of the ladies and finished the race in first once again, claiming her fourth consecutive Carolina Cup victory.

Following the finish of the elite race, spirits were high and the camaraderie between all the athletes was inspiring to say the least. Everyone held smiles on their faces and enjoyed the entertainment on hand while sipping well-deserved beers and eating a nice big lunch. After the success of the event this year at the 2016 Carolina Cup, there is no doubt that this event is here to stay for many years to come, only getting bigger and better.