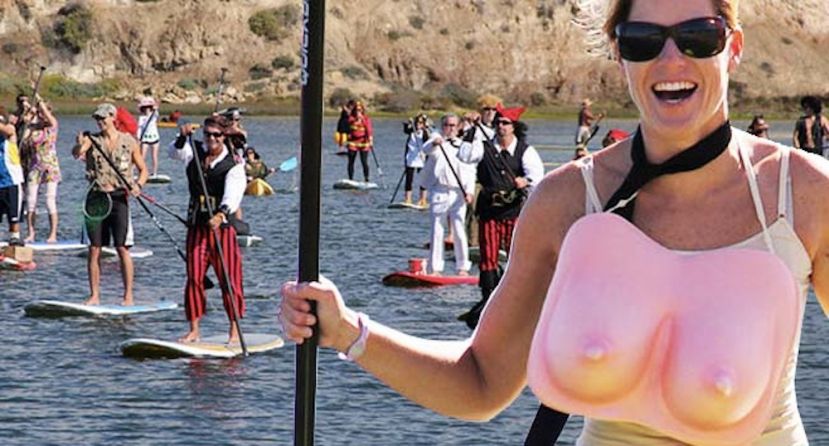 Mandy McDonnell, the event organizer and one of the leading figures in the Newport Beach area, poses in one of her costume (foreground) while her crew of "bandits" stroke away (background). Photo: P.J. Fisher. VIEW FULL IMAGES

NEWPORT BEACH, California – SUP dog’s 1st Annual “Paddle for Privates,” held in Newport Beach, CA on Saturday October 30th, was a huge success! The weather cooperated, there were some fantastic costumes, a good time on the water and a significant amount of money raised for the John Wayne Cancer Foundation!

The event route had 77 costumed participants paddling SUPs, kayaks and outriggers from the Newport Aquatic Center, on an approximately 4 mile route with two stopovers along the route. The 1st stop was for 30 minutes at the Balboa Bay Club, where complimentary “hydrating” refreshments were served on the beach and the pool/beach bar was open for morning cocktails. Our 2nd stop brought us to the Lido Peninsula beach for an hour, where we were greeted by the TK Burger truck for lunch and beachy tunes. Hinano provided the beer, which proved to be very popular!

Upon return to the NAC, there was a raffle drawing with tons of great prizes and awards presented for “best costume” in several categories. Jeff Cruz was presented the Grand Prize (Suplove stand up paddle board and Werner Paddle) for winning the “SUP dog Team DUKE 2-Week Challenge,” an award he earned by raising $1,000 in 2 weeks on his Team DUKE personal webpage (teamduke.org)! Tamira Clayton was the runner-up, having brought in $450 through her fund raising efforts. Congratulations to both of you, thanks for your support and keep up the great work!

Professional Paddle for Privates EVENT PHOTOS are online at: www.sabrinafuscophotography.com "Galleries" -> "Events" (There are 3 albums referring to 'privates') Password "suphalloween"! Enjoy! There are also photos from participants’ personal cameras on my (Mandy McDonnell’s) facebook page….More to come.

I was originally inspired to plan this event as a kick off to “Movember” because I think their cancer-fighting organization is doing hilarious and awesome things. I decided to raise the money for a very local cancer charity and cover ALL MALE AND FEMALE “PRIVATE PART” CANCERS, while raising awareness for both the JWCF (jwcf.org) and Movember (movember.com). Check them both out because they rock and don’t be surprised if SUP dog holds a ‘stache paddle at the end of the month. I am already so fired-up to blow “Paddle for Privates” out of the water (so to speak) next year, so save the same weekend!

SUP dog is in the process of ramping-up operations at its new home location - the Newport Aquatic Center, Newport Beach (newportaquaticcenter.com) - to include group/corporate events, classes, training, tours and more themed/special event paddles and other on-the-water events. If you or anyone you know wants to try paddling themselves or in a group setting of any kind, please contact SUP dog!  Weekly social paddles will be back, starting Saturday November 20th at 9:30am at the NAC (newportaquaticcenter.com), with plenty of boards/paddles to rent or you can bring your own equipment.

See you on the water!

More in this category: « Paddle for Humanity at Deerfield Beach Paddle for Pudsey on the Isle of Wight »