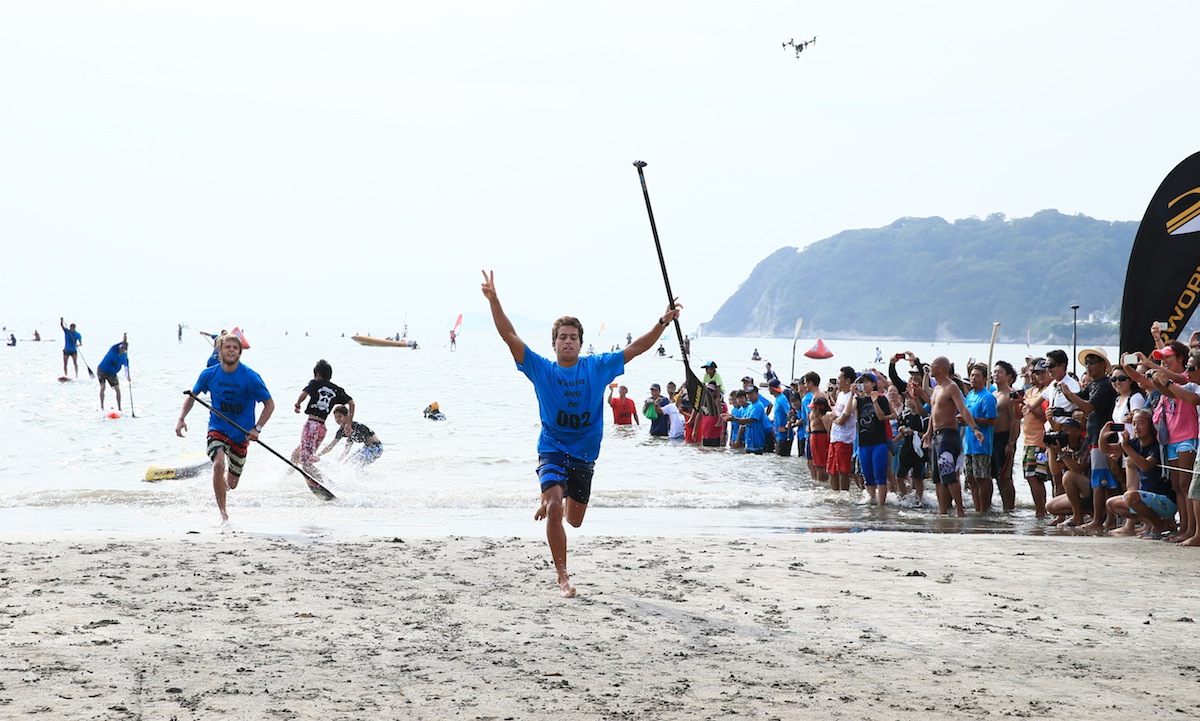 KANAGAWA, Japan - In a dramatic Final heat at stop #2 of the 2015 Stand Up World Series, Kai Lenny digs deep and resets himself mid-way through to find a window of opportunity while rounding the final buoy to take the win in the sprint racing component of the Victoria Cup Hayama Pro. Once round the buoy, he accelerated to move into second past the World Rankings leader Connor Baxter, then past Naish teammate Casper Steinfath to move into first and take victory on this final day of action.

A win in the sprints, combined with his second place finish in the long distance race secured the 2x World Champion the coveted Overall Event Title at the Victoria Cup Hayama Pro in Japan, the second stop on the 2015 Stand Up World Series.

Kai’s win at the event moves him into the top spot alongside Connor Baxter, with a win a piece at the mid way point of the 2015 season. This means that the Title Race is intensifying massively going into the next stop at Surf City USA later this month. 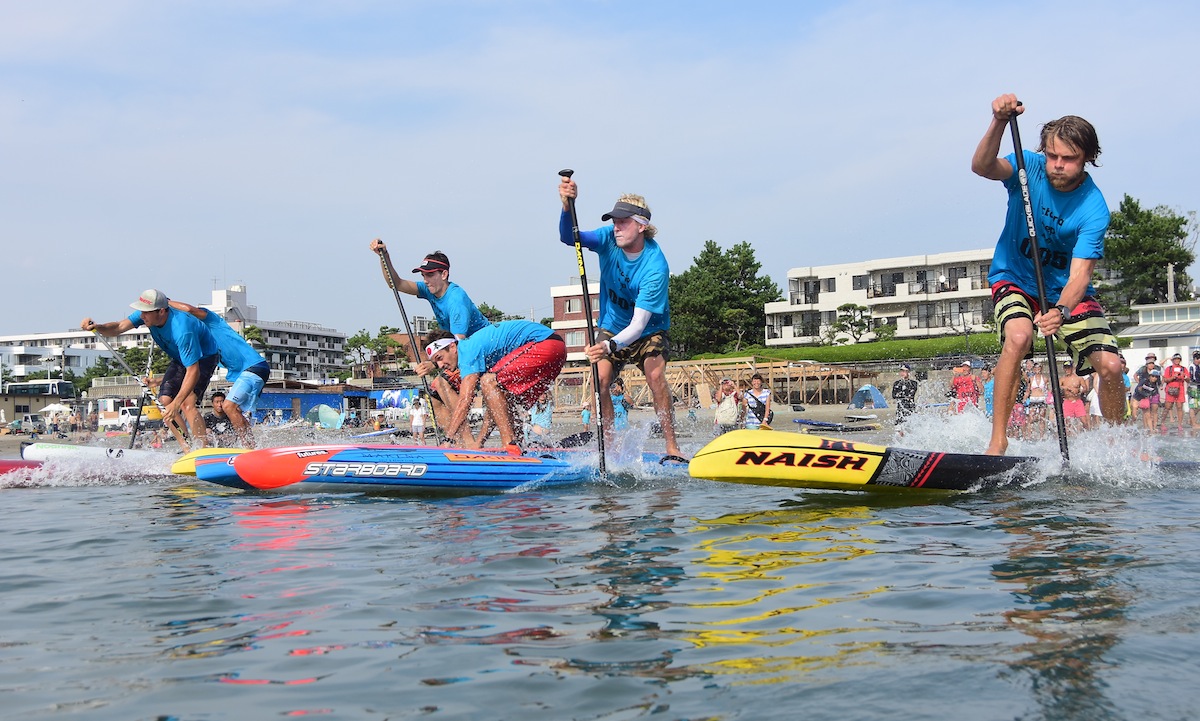 After the epic final battle of the day, Connor Baxter (Starboard) was forced to settle for 3rd in the sprints and 2nd overall for the event, a result that keeps him in the top spot, but forces him to share it with arch rival Kai Lenny (Naish) coming into the next stop in Surf City USA, the US Open of Stand Up Paddling.

Connor had a great start in the final, battling for the lead with Casper Steinfath who led around the first buoy and into the second. However, Connor was able to get a great line around the inside buoy, pushing Casper wide and allowing him to take the lead, a lead that he would keep until the final buoy, as the two Naish team mates were able to pass underneath him and maintain the advantage through to the finish line.

Despite the disappointment of not taking the win in today’s sprint racing, Connor is still in the top spot and the battle will pick back up once again in just a few weeks time at the US Open of Stand Up Paddling in Huntington Beach. 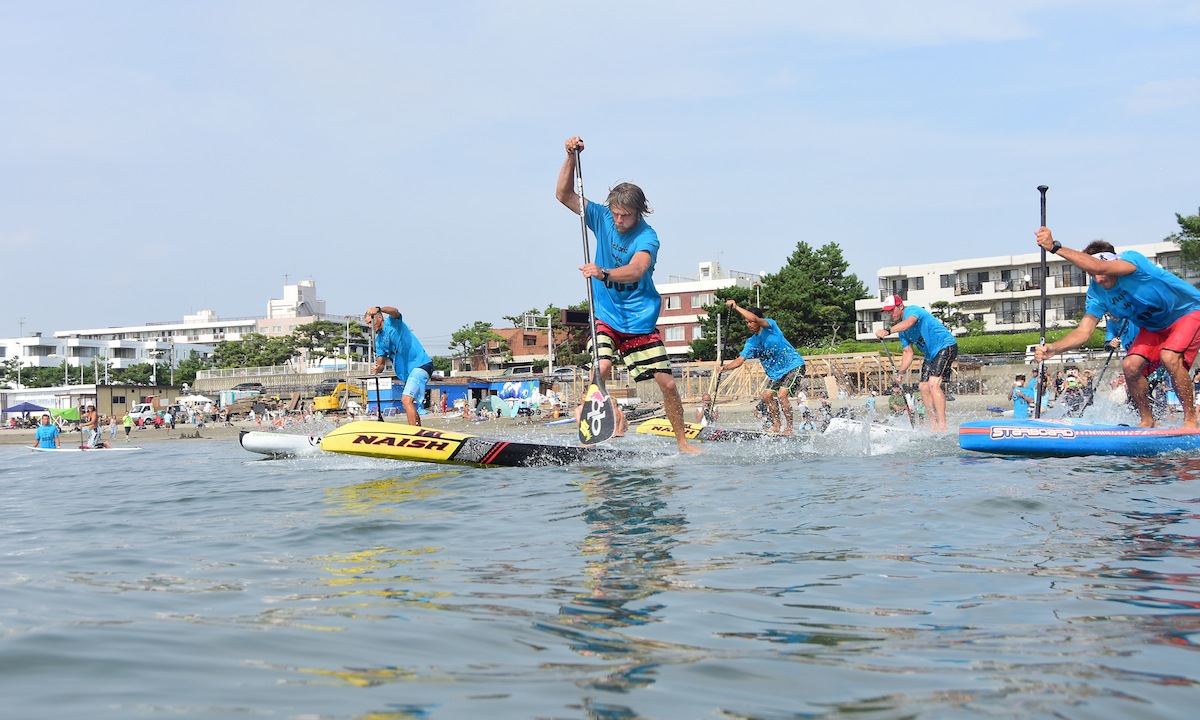 Casper Steinfath turns it on on the final day of racing here in Japan, to secure 2nd place in the sprints & 3rd place overall for the event. | Photo Courtesy: Waterman League

Finishing in 2nd in the sprint racing was the recently crowned European Champion, Casper Steinfath (Naish), putting on an impressive performance amid the World Class line up. Celebrating his birthday here in Japan, the Viking was able to dig deep when it counted, making his move along with Kai Lenny (Naish), by taking the inside line on the final buoy to take the lead coming into the home stretch.

While Kai was able to overtake, Casper once again showed how dangerous he is on the World Series, particularly in the sprint racing, securing 3rd overall for the Victoria Cup Hayama Pro in Japan and propelling him to 4th overall in the Overall World Rankings at the year’s midway point. 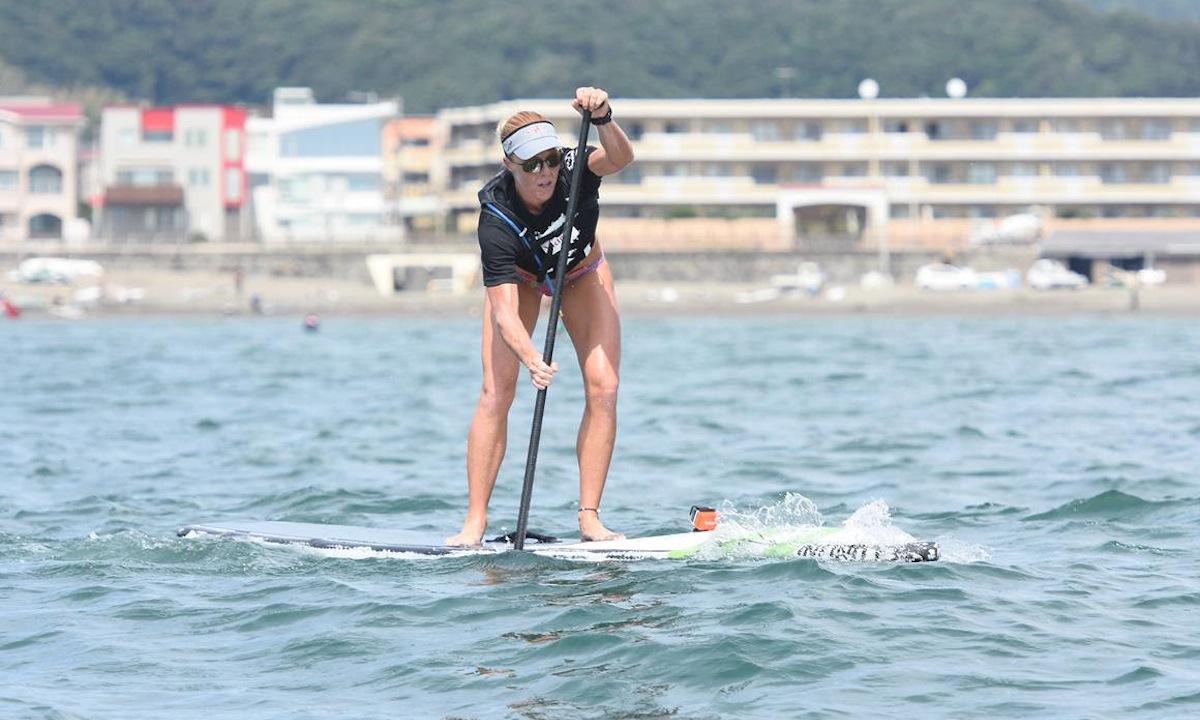 Candice Appleby continues her dominance on Day 2 of the Victoria Cup Hayama Pro Japan, to take victory in the sprints & the Overall. | Photo Courtesy: Waterman League

Candice Appleby (Infinity) continues her dominant roll on this year’s Stand up World Series notching up another win in the sprint racing, which combined with her win in the long distance secures her the Overall Event win at the 2015 Victoria Cup Hayama Pro Japan. Candice approached each of her heats methodically, taking the lead early and maintaining it through the finish to take the sprint racing win ahead of a stiff field of competition.

Coming into the next event in Surf City USA later this month Candice is looking in a solid position with just one more win required for her to secure the World Title in 2015. However, it will not be an easy road, as the World’s best will be on hand and all vying to take down the yellow jersey at the next dramatic stop on the 2015 Stand Up World Championship Series.

Manca Notar (Naish) stepped up in the sprint racing, with her eyes on the prize and determined to challenge Candice Appleby (Infinity) for the top spot. While she wasn’t able to catch Candice, she did manage to secure a close second in the sprint racing and get the edge on the 2nd place finisher for yesterday’s sprint racing, Fiona Wylde to move up into 2nd place overall at this all important 2nd stop on the 2015 Stand Up World Series.

With a 3rd place in Barcelona and now a 2nd place in Japan, Manca is setting herself up for a solid overall finish for the 2015 season and establishing herself as one of the names to beat. 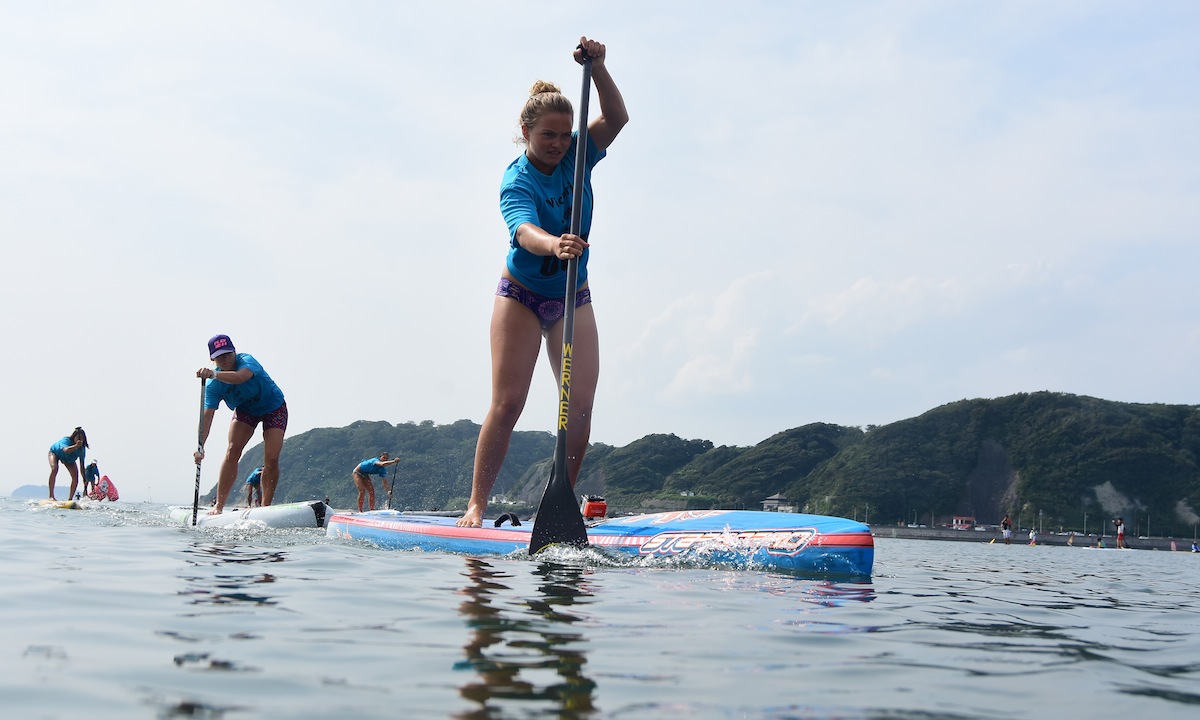 Fiona Wylde cements her reputation as one of the most well rounded athletes in the sport with another impressive performance. | Photo Courtesy: Waterman League

Fiona Wylde (Starboard) put on a valiant performance in the sprint racing, battling with Angela Jackson from Australia right up until the beach, where she stumbled, unfortunately for Fiona, letting Angela slip ahead of her to secure 3rd place in today’s racing. This meant that Fiona had to settle for 4th, which combined with her 2nd place finish from yesterday’s long distance left her in 3rd place overall for the event.

While this is still an impressive result and a podium finish, Fiona is hungry for results and is one of the most competitive athletes on Tour. This will only fuel her further coming into the next event in Huntington later this month. 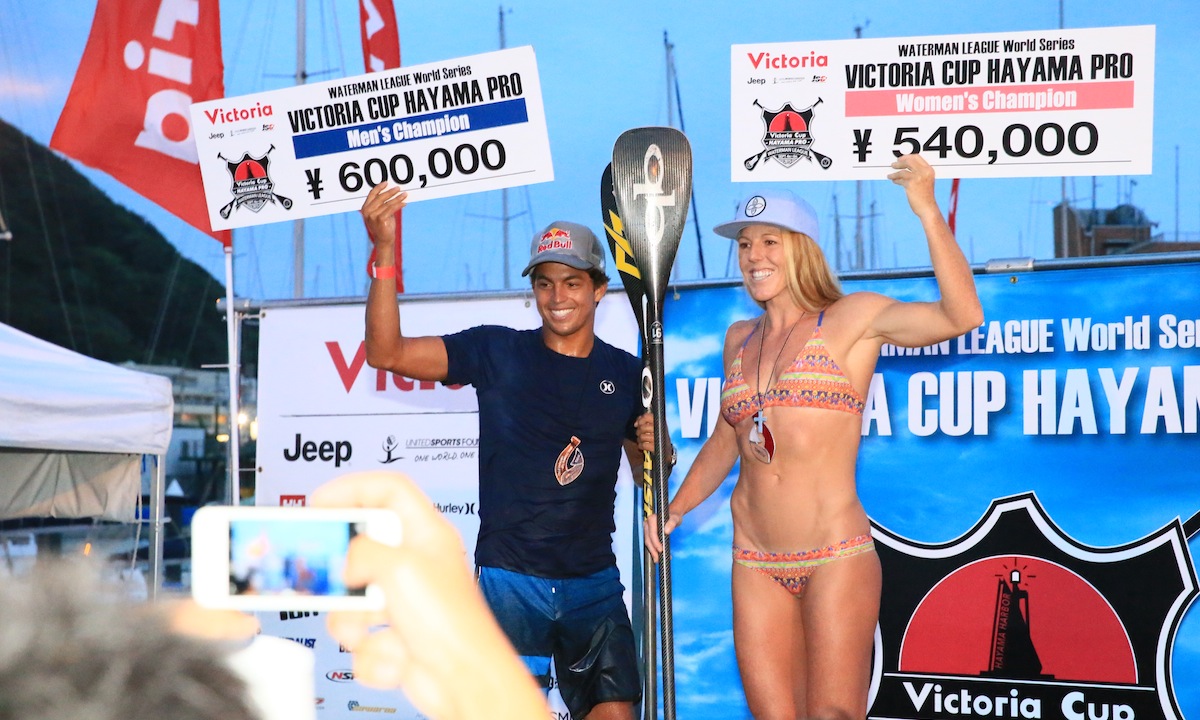 Japan provides the ideal arena for the World's best to do battle while nurturing what is proving to be a hotbed of local talent. | Photo Courtesy: Waterman League

The Victoria Cup Hayama Pro Japan, stop #2 of the 2015 Stand up World Series provided the perfect platform for the world's best to showcase World Championship Racing at its very best. It also successfully nurtured the seasoned enthusiasts and newcomers alike in a celebration of the exponential growth that the sport is seeing locally here in Japan.

The Japanese welcome is like no other, and the Waterman League would like to send a thank you to all their partners, the City of Hayama and Zushi and the presinct of Kanagawa for hosting such a maginficent event. A big thank you also to their event partners, who stepped up in 2015 to upgrade this prestigious Asian stop on the World Series and make it everything it has been. We can't wait to come back in 2016, when the World Series will return to the land of the Rising Sun for the next edition of the World Series in Japan.

Meanwhile, with one more day of the event still to go, the athletes will now trade their high performance race boards in for entry level equipment and a mentorship role, as Japan's youth are embraced through the unique Na Kama Kai Youth Program taking place tomorrow here at the Victoria Cup Hayama Pro Japan. Na Kama Kai's mission is to provide unique Ocean Sports and education opportunities for youth, a message that the Waterman League not only wholeheartdely supports, but endeavors to take to all four corners of the world through its World Championship platform.

We are proud to have Na Kama Kai's founder Duane DeSoto himself here in Japan to lead this youth program here in conjunction with with the world's very best athletes. Beyond the youth program, still to come is an entry level 3km race that will be the final battle of this year's closes what has been a specatcular event in every sense. We look forward to welcoming the new crop of enthusiasts in for an unforgettable experience.

So congratulations to all the athletes & make sure to check out the highlights from both days of racing below and stay tuned for the build up to the US Open of Stand Up Paddling to kick off later this month at watermanleague.com

To see more news and highlights from the Stand Up World Series, click here.