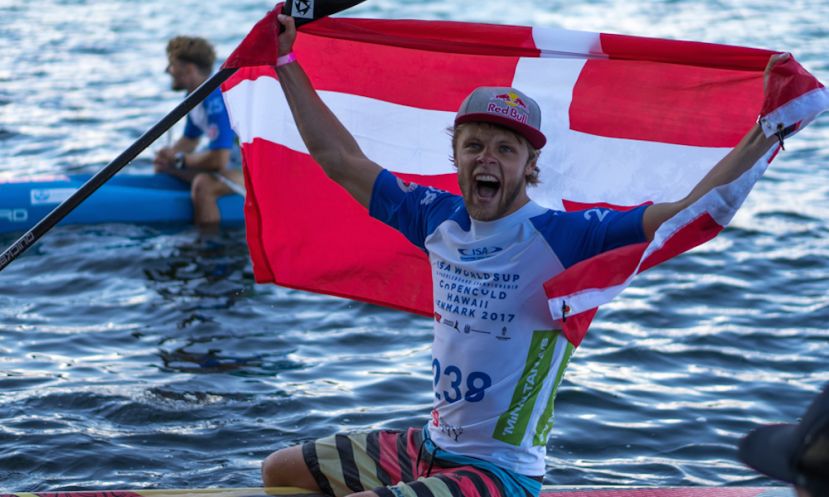 COPENHAGEN, Denmark - Local sensation, Casper Steinfath (Naish) overcame a second-place finish in the semi-final to deliver a commanding gold-medal performance in the 200-meter SUP Sprint Race Final to close a spectacular weekend of SUP racing in Copenhagen at the 2017 ISA World SUP and Paddleboard Championship.

The spectacular win by Steinfath in front of an energetic and vocal home crowd was also carried live on Danish national television. Steinfath's victory was another historic moment for the sport of SUP and Denmark. The SUP Sprint Gold Medal is the second consecutive Sprint Title and fifth ISA SUP Racing Title for Steinfath, who also has been a leader in advancing the sport of SUP, serving as the ISA Vice President since 2014.

"This is the biggest moment in my life," said Steinfath. "It doesn't feel real!"

"People talk about Denmark as the country of fairy tales and I feel the fairy tale of my life just came true. To win in front of my home crowd was just a wild dream. I thought I would never achieve it.

"I'm especially stoked after my first-round heat where I hit a wall and barely made the Finals.

"I am happy that I decided to not compete in the Distance Race and focus on the Sprints. I respect all the athletes that decided to do both, but my game plan worked. I couldn't ask for anything more."

Casper Steinfath, a local of Cold Hawaii, will now look ahead to the SUP Technical Race to take place in Vorupør between September 5-10, just kilometers from his home town of Klitmøller. 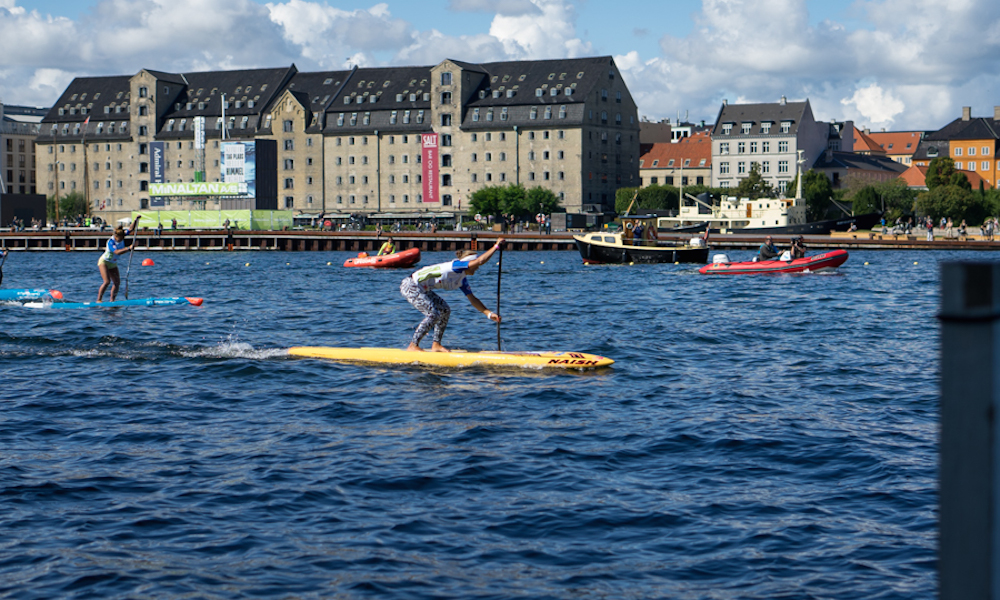 In the Women's SUP Sprint Final, Slovenia's Manca Notar put on a dominate performance, beating the rest of the field by a decisive three-second margin.

"This is incredible!" said Notar. "Coming from Slovenia we only have lakes and a little bit of seaside. I train all the time alone at home and I knew that I had pretty good times, but I didn't know I was this good. All the girls pushed so hard. I can't believe it."

Notar's Gold Medal exemplifies the growing reach of the sport in non-traditional SUP nations, just a day after Hungary's Bruno Hasulyo won the first ISA SUP Gold Medal ever for a land-locked nation in the Men's Distance Race. With just over 40 kilometers of coast in Slovenia, Notar's performance symbolizes another significant leap forward for developing SUP nations.

The SUP Sprints kicked off on Sunday morning with sunny skies and a light breeze at the Copenhagen Opera House. The 42 participating National teams lined the harbor to root on their athletes competing for Gold Medals. The Men and Women featured four Semifinal heats each, with the top two of each heat advancing to the eight-person Finals.

The SUP Sprint Semifinals entered the water first with France's Amandine Chazot (1:08:80) notching the fastest time for the Women and Latvia's Arvis Iljins (0:56:97) the fastest for the Men. Notably, yesterday's Women's SUP Distance Race Gold Medalist, Annabel Anderson (NZL), fell off the pace of the second Sprint Semifinal placing third and missing out on a shot at the podium.

During the first of the Men's Semifinals the local Danish crowd held their breath as Casper Steinfath got off to a slow start and came across the finish line in a photo finish for second place with Hawaii's Connor Baxter. The spectators anxiously awaited Steinfath's result, and let out a boisterous cheer when it was announced that he had edged out Baxter by inches to take the advancing second place position. 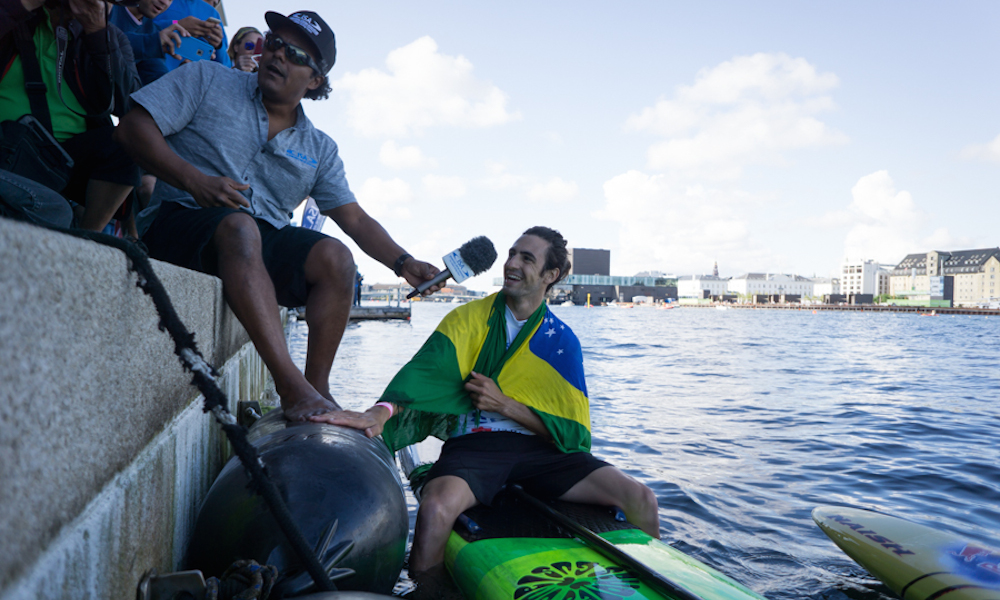 Steinfath's finish in the Final didn't leave any doubt for the judges, pulling ahead of the field by a full board length. New Zealand's Trevor Tunnington followed with the Silver Medal, Brazil's Artur Santacreu with the Bronze, and Australia's Lincoln Dews with the Copper. Manca Notar also displayed stunning acceleration in the Women's Final, finishing well ahead of France's Amandine Chazot who earned the Silver Medal. USA's Jade Howson and Japan's Yuka Sato respectively finished with the Bronze and Copper Medals. 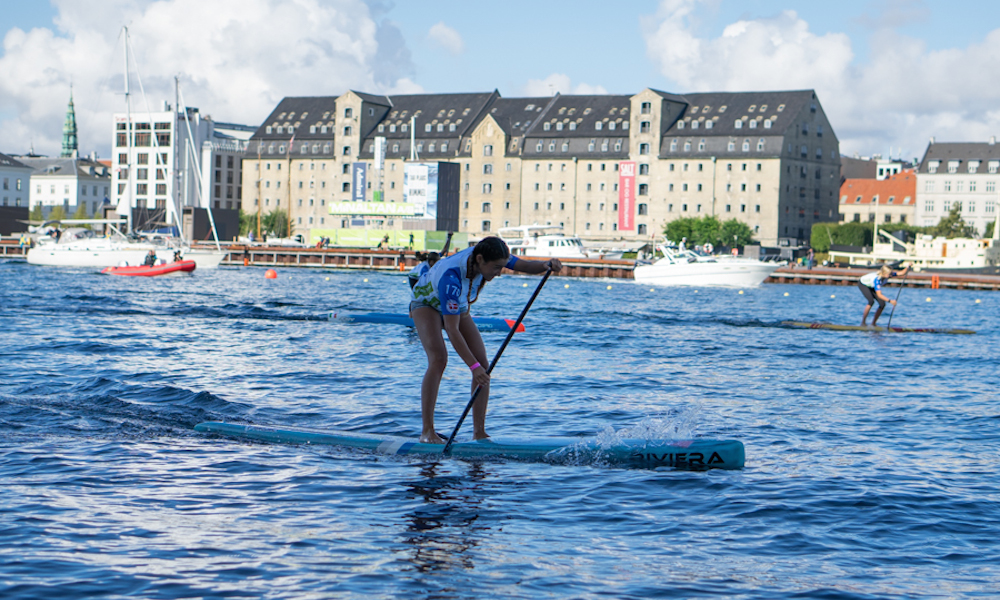 Young American, Jade Howson, on her way to a Bronze medal at her 1st appearance at the ISA World SUP Championships. | Photo: ISA / Sean Evans

After the competition, an award ceremony followed to honor the first SUP Gold Medalists crowned in Copenhagen and bid farewell to the enchanting city that hosted the first leg of the event.

"What a couple of days here in Denmark. It's been a week of firsts: The first time for this event in Europe, the first time Denmark has hosted an ISA event, first SUP World Championship with gender equality, the first time a Danish woman has won a medal, and the first time that Casper Steinfath has won a Gold Medal at home. That's truly special.

"Thanks to everyone that has been with us all these days. This is a bittersweet moment because we had such a great time in this city walking the streets, riding bicycles, and enjoying the culture. Today we wrap up the event in Copenhagen and go to Cold Hawaii to experience the beautiful northwest coast of Denmark.

"I would also like congratulate the participants here this weekend and to give a special award to the Mayor of Culture and Leisure of Copenhagen, Carl Christian Ebbesen, so every day he remembers the ISA and the 42 nations that came to visit. We will leave the Sands of the World here in Copenhagen, to remember forever this first encounter of the ISA and the Danish capital."

The Mayor of Culture and Leisure of Copenhagen, Carl Christian Ebbesen, said:

"Thank you so much on behalf of the City of Copenhagen. I am so proud that all you have managed to put on this incredible event. Congrats to Casper for the Gold Medal and all the other athletes for doing a great job."

The event will be streaming live September 1-10 on www.isaworlds.com.