DUXBURY, Massachusetts – The Cape Cod Bay Challenge (CCBC), the oldest and most recognized stand up paddle (SUP) event in the northeast, returns for its twelfth year to benefit Christopher’s Haven, a home for kids when cancer hits home on Saturday, July 27, 2019 from 7:00 a.m. – 4:00 p.m.

An estimated fifty people will participate in the 22-mile SUP marathon beginning at Scusset Beach in Sagamore or Nantasket Beach in Hull (depending on the weather forecast) and ending at Duxbury Beach. After the paddlers land on Duxbury Beach, there will be a celebration and fundraiser at Blakeman’s restaurant, adjacent to the beach, which will go from 4:00 – 10:00 p.m. There will be food, beverages, raffles, a silent auction and live music beginning at 7 p.m. by reggae band, the Elovators. Paddler registration, ticket information and pricing can be found by visiting the Christopher’s Haven website.

“Back in 2004 CCBC co-founder Bob Babcock was undergoing proton beam treatment for a brain tumor at Massachusetts General Hospital and before one of the treatments he struck up a conversation with a child unfortunately there for the same reason,” said Cape Cod Bay Challenge President, Mike Chase. “Bob is a big guy and the child told him not to be scared and that the treatment was kind of cool. This conversation and the child’s bravery stuck with Bob. Over the next 4 or 5 years, Bob started stand-up paddle boarding as therapy for residual balance issues from his tumor and he fell in love with the sport. When he and co-founder Mike Brown decided to put together a charity event involving stand up paddle boarding, they came across Christopher’s Haven as a potential beneficiary of the event. After meeting with Christopher’s Haven, they found out that many of the kids that stay there are undergoing the same proton therapy and from that point forward they decided to dedicate all of the CCBC fundraising efforts to Christopher’s Haven. Here we are, 12 years and $850,000 raised later, we are closing in on the $1 million mark and would love to be able celebrate that fundraising milestone in Duxbury in late-July.”

100% of the proceeds will benefit Christopher’s Haven, located at One Emerson Place in Boston’s West End, across the street from Massachusetts General Hospital. Nearly 450 families have stayed at Christopher’s Haven to date, and the Cape Cod Bay Challenge’s support over the past ten years has contributed to making those stays possible. 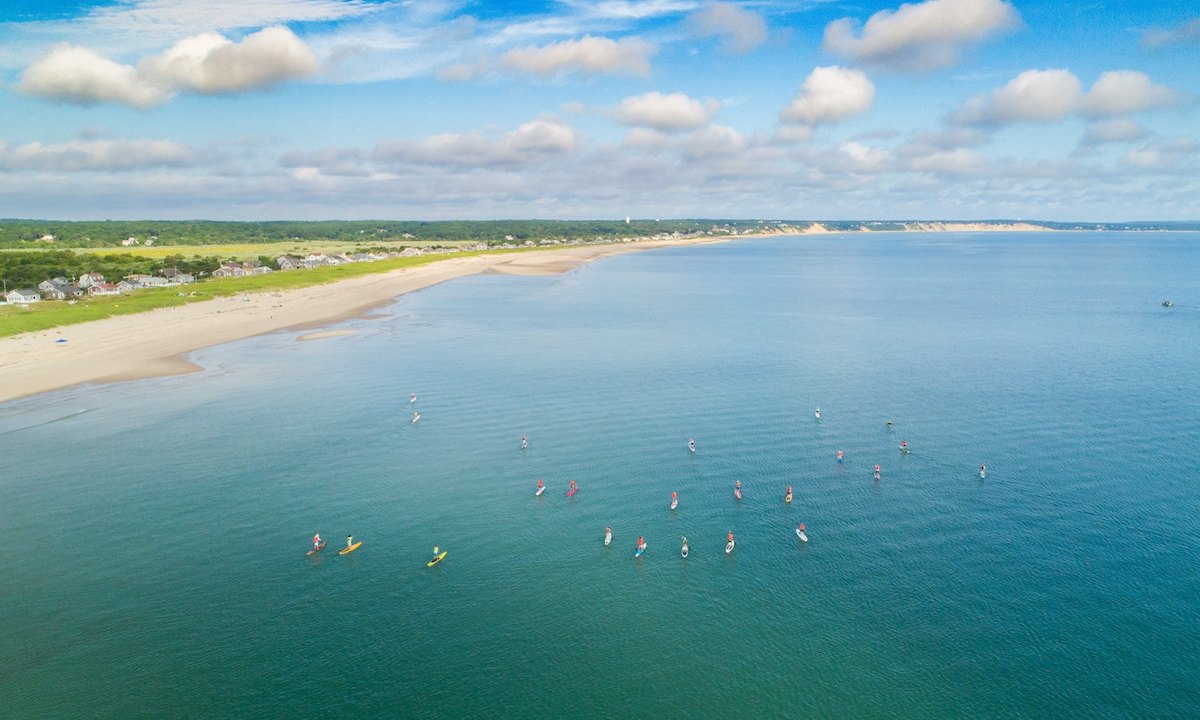 “It’s immeasurable what Bob, Mike, Mike and their team at Cape Cod Bay Challenge has done to support us for well over a decade,” said Christopher’s Haven Executive Director, Joyce Duvall. “We cherish all of our partners, but it’s truly special when an organization from outside the Boston region supports our cause, and spreads the word of what we do to other parts of the state and beyond. Christopher’s Haven is welcoming and accepting of families and children from all over the state, the country and the world, and organizations like CCBC helps us get that message across.”

Christopher’s Haven operates and manages nine residential apartments and a community area (The Loft) that offers a space for recreation, sharing and support for the families. 438 families to-date have stayed in the fully-furnished and equipped apartments located at One Emerson Place (across the street from Massachusetts General Hospital). Families value the close proximity to the area medical centers, treasure the ability to be together in an apartment setting and cherish the much-needed support with other families facing similar circumstances during interaction in The Loft.

Opened on Labor Day 2006, Christopher's Haven is a 501(c)(3) organization located in Boston, Massachusetts with a mission to operate a supportive community consisting of ten temporary apartments and a community recreation area for families of children being treated for cancer in nearby Boston hospitals. Christopher's Haven holds the distinction of being the only organization of its kind that offers an apartment setting for the entire family, specific programs and activities for children undergoing outpatient treatment, as well as programs for siblings and parents, and takes full advantage -- through the help of an extensive volunteer network -- of both the unparalleled medical and cultural advantages of Boston. For more information, please visit christophershaven.org.