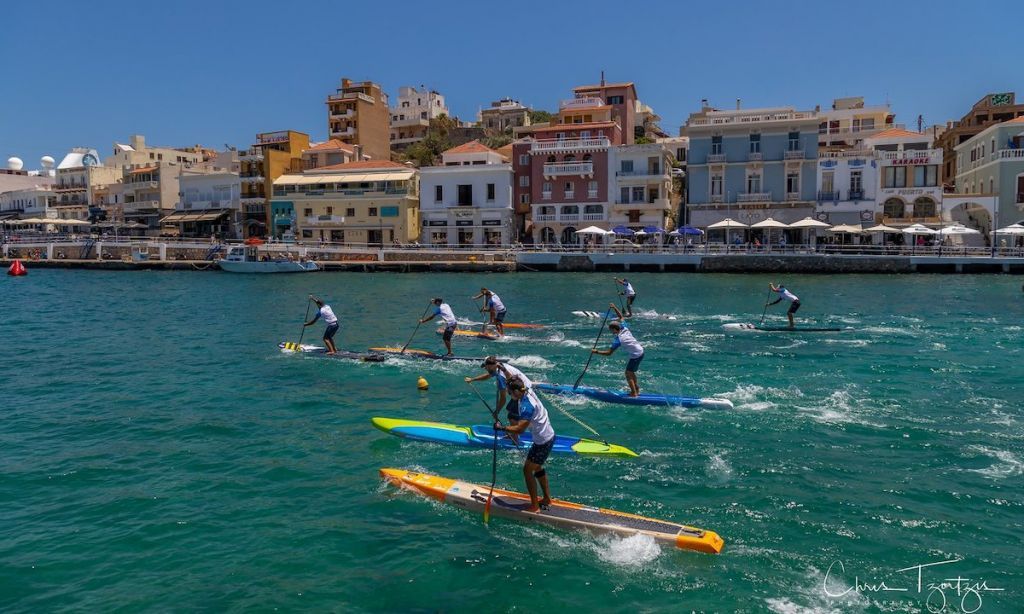 CRETE, Greece - Greece hosted for the 5th year in a row the Agios Nikolaos on SUP event, one of the most important SUP events in Greece and an official stop of the Eurotour SUP Grand Slam Europe, with entries from all around the world. Agios Nikolaos on SUP took place June 22-23 and showcased the beautiful Mediterranean climate and the richly colored beaches, while being combined with a series of cultural events. It allowed visitors to enjoy the authentic Cretan summer atmosphere and hospitality of Agios Nikolaos, Crete.

On Saturday 22nd June, registrations reached 140 participants from 14 countries, the 64 athletes of the 15km Eurotour Event were transferred to Blue Palace Resort & Spa Hotel, while the spectators gathered at the finish-line at Lake Agios Nikolaos from where they could watch the event on a giant screen in live broadcast.

At about 16:00, the women of Eurotour started, and 10 minutes later the men's category began, so both categories could cross the finish line together, side-by-side in the Lake of Agios Nikolaos. In men’s category once again, Michael Booth (Starboard) took 1st place, coming from a winning streak after the Corfu Emerald Cup and in women’s Fiona Wylde (Starboard), also in a winning streak, finished 1st in Agios Nikolaos On SUP’s Eurotour 15km downwind - the 5th year in a row with a downwind track. Two safe, but not easy wins for both, keeping the lead steadily from start to finish. 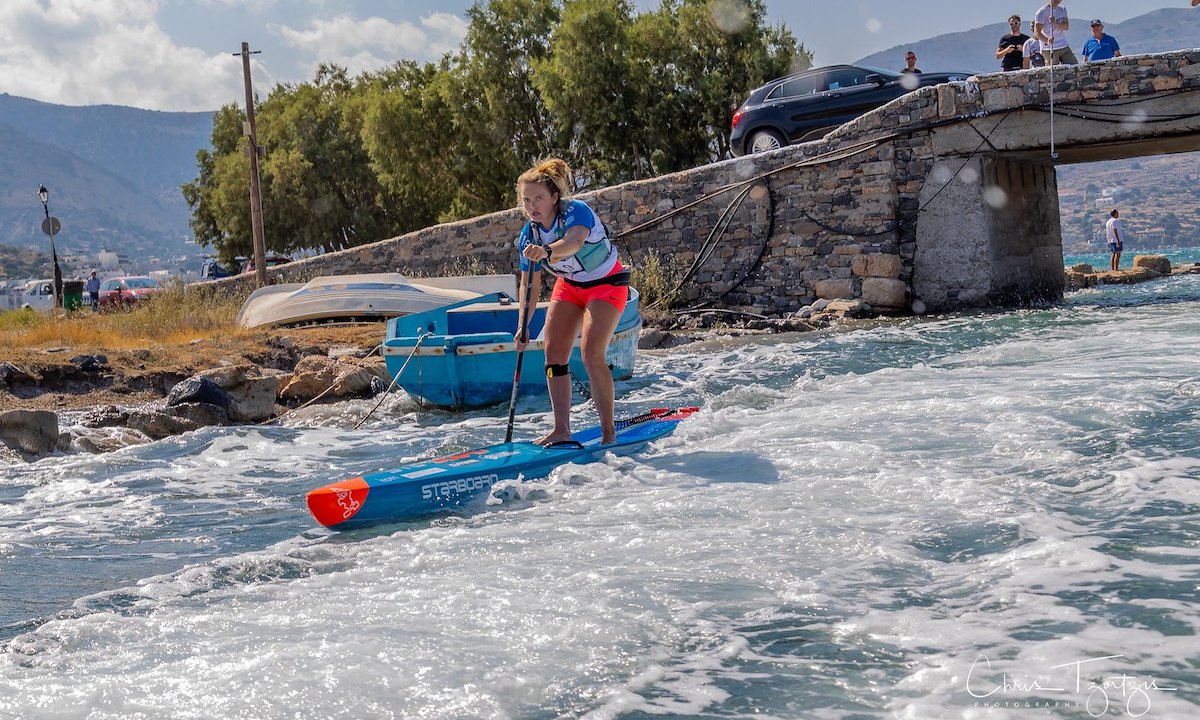 Agios Nikolaos weather conditions gave the athletes a hard time on a track that they characterized as “one of the toughest in their sporting career." The change of direction of the wind in different segments of the course of the event had the athletes struggling with frequent sidewind and headwind with heavy ripple with very short flat segments, while significant parts of downwind intervals made their work easy. Participants with ocean water boards seemed to have an advantage due to the conditions compared to those who competed with flat water boards.

In the women’s division, Fiona Wylde took advantage of her experience on the open seas and by turning the side-winds in her favor with brilliant technique and riding the waves, she took a strong lead in the beginning. Behind and very close together, Sonni Hönscheid and Amandine Chazot (Sunova), with their tremendous experience succeeded and reduced the distance in the flat water & headwind parts of the route in the last kilometers, grinding the initial distance. However, Fiona kept strong and won the 1st place on the podium.

In men’s category, with headwinds and strong sea ripples from the start of the route, five draft trains were immediately formed by the participants, with Michael Booth paddling away from the very first few minutes a considerable distance from the rest of the pack, with a group of eight athletes following right behind from the beginning as well. The conditions were difficult even for athletes of this level who struggled to keep their balance in the waves and the side and head winds. There was a point where the headwinds reached nearly 40 knots and the athletes seemed not to move at all, standing still on their boards. Michael Booth finished first with a minute and a half away from the next, Vinnicus Martins (JP), who managed to get the distance from the finishing 3rd Martin Vitry (SIC Maui) for only a few seconds in a strong duel in the last few meters. 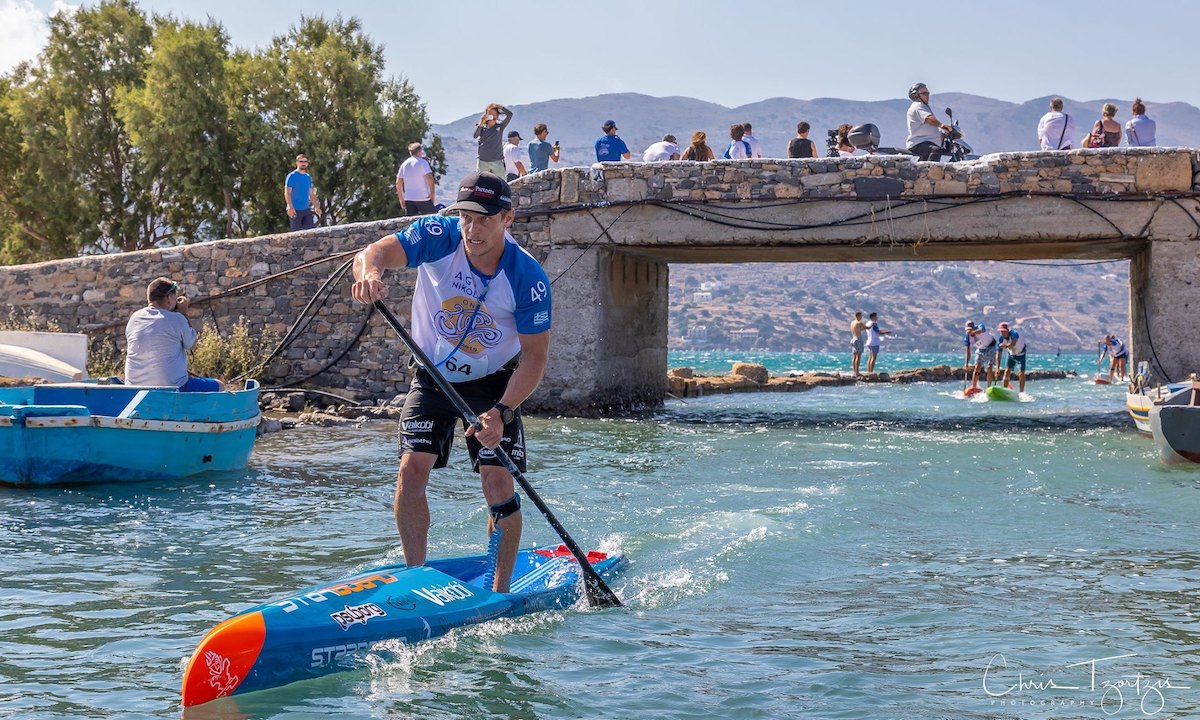 Eurotour amateurs did not have an easy task in front of them because of the winds, since even the most experienced athletes struggled to keep balance. Nevertheless, they managed to show their passion, with Demetris Apalagakis showing his teeth in the Amateur category, finishing 1st followed by Vassilis Samiotis and Akis Vlachos while the women went extremely well too, as Nancy Karaindrou from Agios Nikolaos on SUP Academy finished 1st with a pro-like time, with Elli Frygadi and Amalia Vlachaki occupying 2nd and 3rd place respectively. In the Masters 40+ category Nicholas Markakis, Dimitris Komninos and Nikolaos Papadakis climbed the podium with very good times, while in women Iliana Lakafosi took the 1st place, with Popi Papadimou and Emmanouela Demetriou completing the podium.

The audience of the coastal city of Agios Nikolaos cheered for the participants crossing the finish-line under the bridge of the Lake of Agios Nikolaos and continued their hot summer afternoon with SUP games where young and adults played with the SUP boards on a special obstacle course set in Lake Voulismeni, where everyone was awarded for participating. Day 1 came to an end with a glorious award ceremony for the professional athletes and champions of Eurotour from all over the world. The celebrations for the night continued at the traditional festival of “Klidonas” with dance and Cretan music. 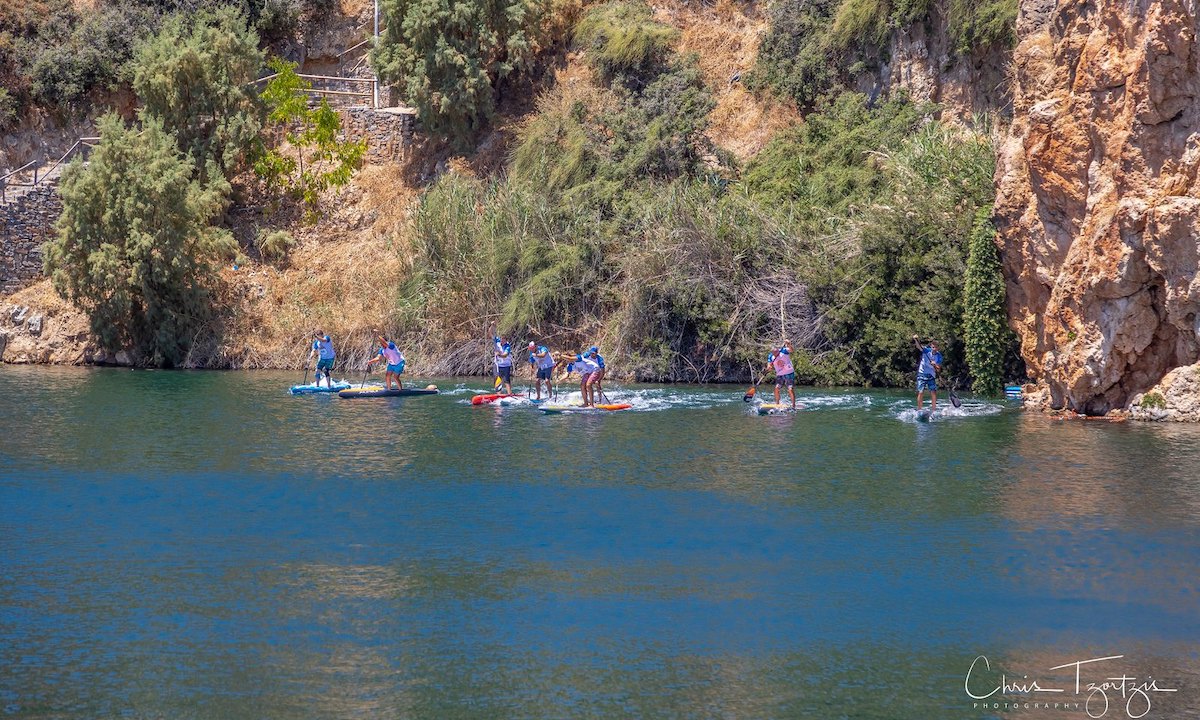 On Sunday the 23 of June, participants for the 200m Sprints and 5km Technical route gathered in the usual meeting point in the Lake of Agios Nikolaos for the rider’s meeting. Sunday’s events would count as Greece’s Qualifiers for the ISA World SUP, from the HSSA, giving extra motivation for the participating athletes.

The 200m Sprint started at 12.30 with a very strong event in the flat waters of Lake Voulismeni, the seawater lagoon in the city center of Agios Nikolaos. Nikos Syrigos(GR), Nick Kalatzakis(GR) & Dimitris Apalagakis(GR) showed they are not to be messed with and skillfully climbed the podium at 1st, 2nd and 3rd place respectively in the men’s category. In women’s category, Stephanie Libzon from Israel with a great time passed 1st from the finish line, leaving behind 2nd Iliana Lakafosi (GR) and 3rd Linda Schwaiger (AT) in a photo finish match. In Masters 40+ Spyros Zotos (GR) finished the 200m with record time and the 13 year old Nikolaos Malekakis (GR) won the Under 18 category. 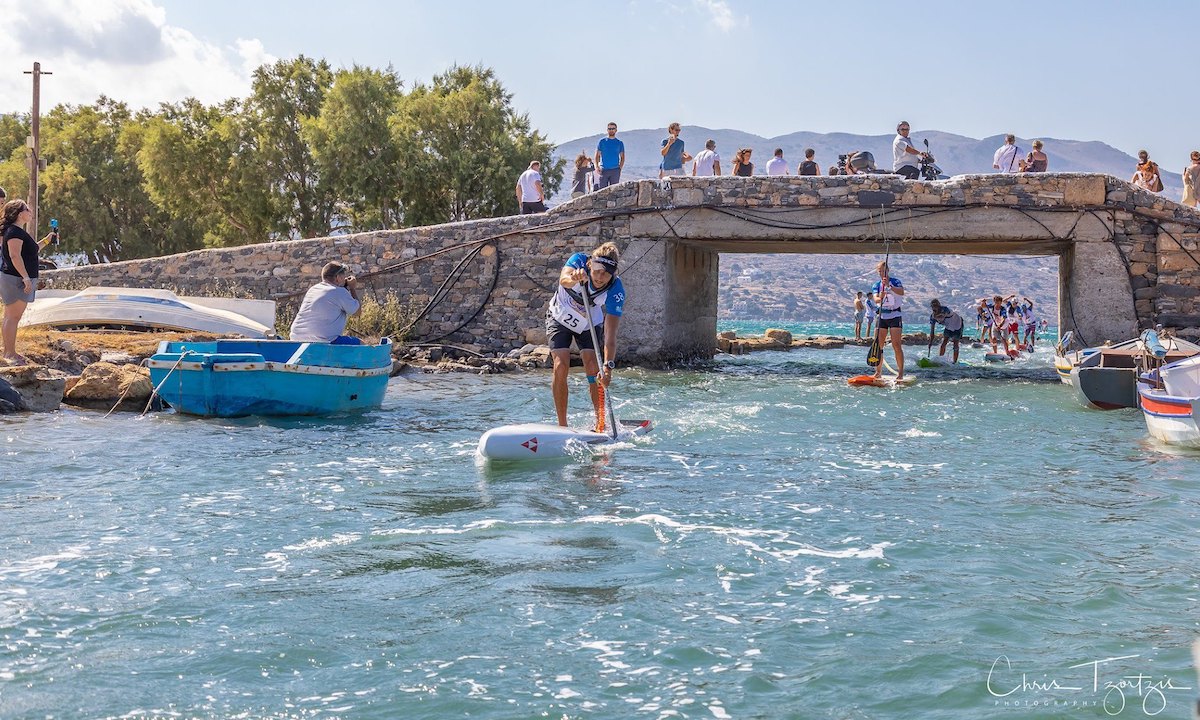 The 5km Technical ISA World SUP Greece Qualifier started at 14.00. The route started from the Lake, passed from 3 buoys in the Port of Agios Nikolaos continued to 3 buoys at Ammoudi beach, end back at the Lake in two course laps of approximately 2,5km each. The battle was strong in the qualifying match with Linda Schwaiger (AT) climbed once again the podium, this time on 1st place, with usual suspects Nancy Karaindrou in 2nd (GR) and Iliana Lakafosi in 3rd (GR). In men’s category 18 year old Anastasios Tsouris (GR) came strong and finished 1st, in a face to face battle with 19 year old Nikos Syrigos (GR) -last year’s Agios Nikolaos on SUP 2018 winner- followed by Kyriakos Fitrakis (GR) a few seconds behind.

In Technical Masters 40+, Ioannis Tountas(GR) won the gold while in the youngsters, in Under 18 category, with exceptional skill Irini Arhavli (GR) and Nikolaos Malekakis (GR) made their family proud and left us expecting even greater results from all the participating young SUPers. The 2nd day award ceremony took place under the hot summer sun of Crete and the celebrations continued with the grandest of festivals the HOLI FEST of Crete, with live music, DJs, decorations and various art projects taking place from the afternoon till next day morning. As summer Agios Nikolaos welcomes its visitors from all around the world, Agios Nikolaos on SUP is already planning next year event for the 2020! 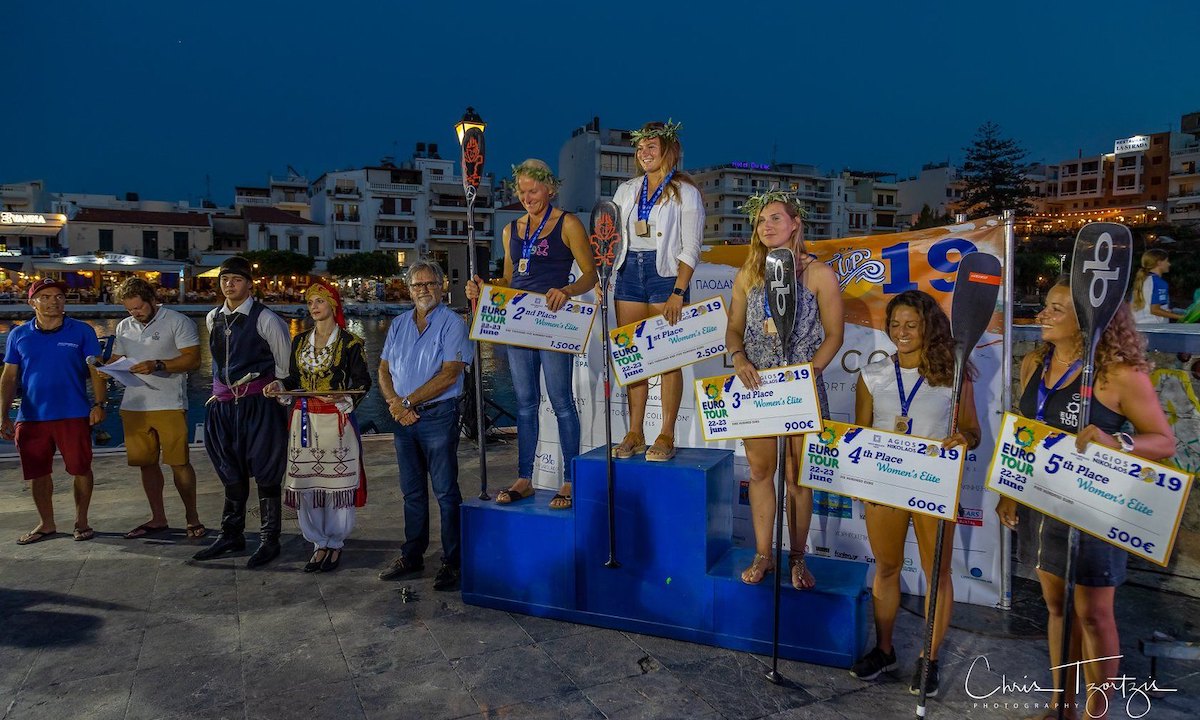