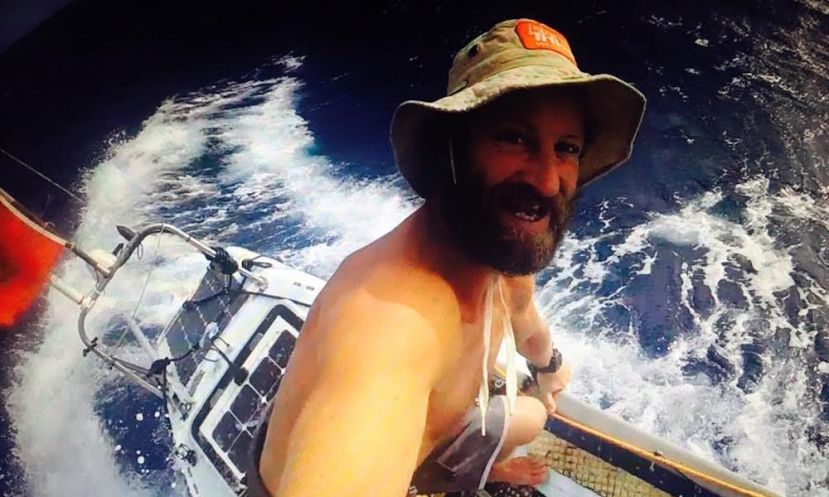 This is the 3rd World Record that Chris has achieved on this epic and unparalleled ocean adventure, and the third 24-hour record attempt made by Chris in the past three consecutive days.

The World Record surpasses a prior record set by endurance SUP guru, Bart de Zwart of Hawaii, which was just over 46 miles, in 24 hours, on his solo journey that took him between the islands of Tahiti and Bora Bora in 2014.

“It was a beautiful morning!” Bertish exclaimed. “I decided to give the Impifish a belly clean and changed out the centerboard to a smaller one and my paddle to a slightly smaller blade. It seemed like the conditions were good and I decided to give it a go beginning at 12:00pm GMT on Valentine’s Day.”

Chris had been thinking about attempting to break the current world record, but knew it would all come down to finding the right conditions, late in the journey, when the trade winds were the most consistent, the craft is a little lighter, and being at a point in the journey where he was most comfortable.

“I'm very happy with the new record. I've been searching for those perfect conditions, that perfect 24-hour weather window for the last 72 days, but I knew once I found it I could crack the mile mark,” commented Bertish. “It just goes to show, if at first you don't succeed, try, try and try, persevere, never give up. I'm looking forward to taking a couple hours break, before getting back out there and paddling again. I still have 750 nautical miles to go and millions of lives to change, that's why I'm here."

Chris has decided to personally donate and pay for one operation for a child in South Africa through Operation Smile for every World Record he achieves on this epic Transatlantic journey.

"Chris' willingness to donate for each milestone along the way speaks to a larger impact in which his every stroke continues to change lives." remarked Tamlin Abrahams, Operation Smile South Africa's Regional Director, Central, Southern and West Africa. Ms. Abrahams added, "We are so honored to be not only recipients of this momentous journey but also partner with Chris as he literally changes lives one paddle stroke at a time. The SUP Crossing is a world record breaking event but the legacy it will leave will be a world-changing one."

Chris began the Sup Crossing on December 6, 2016 from the mainland of Agadir, Morocco, traveling southwest past the Canary Islands. He has already completed over three-quarters of the journey.

The SUP Crossing covers the Atlantic Ocean, while leaving a sustainable legacy by raising enough funds for: The Lunchbox Fund, Operation Smile and Signature of Hope through the annuities we have set up, with the target of raising over $1,124,150 US Dollars, but simultaneously making the entire project, a completely self-sustainable charity initiative, that will have a lasting legacy by paying out monthly, for more than two decades and for generations to follow.