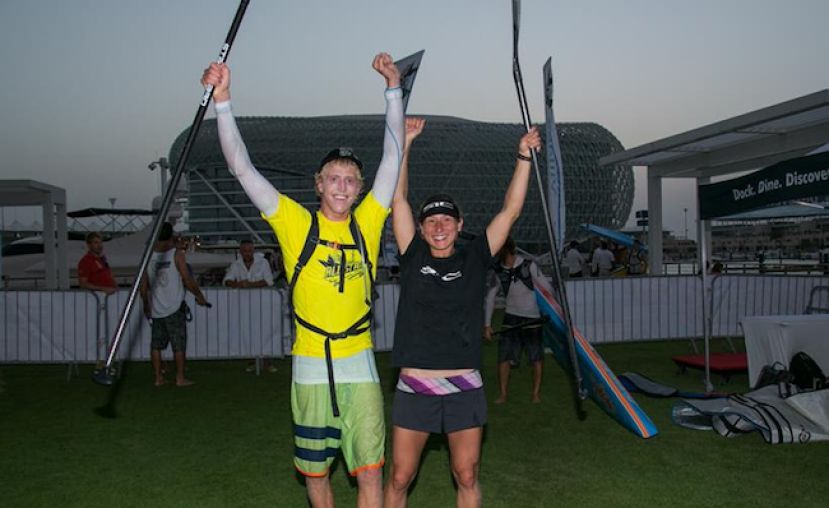 Connor Baxter (Starboard) played a smart game today here at Day 1 of the Stand Up World Series component of the Abu Dhabi All Stars Grand Slam, patiently waiting for the right moment to make a move and sprint to victory in the 8.5km long distance course. The Top 10 athletes were in a pack for 5 out of the 8.5 km, as the Top 8 then broke away through the 5th lap. Coming into the last buoy that led to the final strait, Connor Baxter bided his time, and put his pedal to the metal coming into the home straight, as did fellow Maui athlete and 2x World Racing Champion Kai Lenny (Naish).

It was a battle to the end, with Connor just getting the better of the exchange to cross the line in first: Lenny, just 2 seconds behind. This will only strengthen Connor’s confidence coming into the second day, as we prepare for the World Series Sprint Racing Course right below the Yas Marina Formula 1 circuit and Connor aims for his 2nd bullet victory out of 2 here in the UAE. 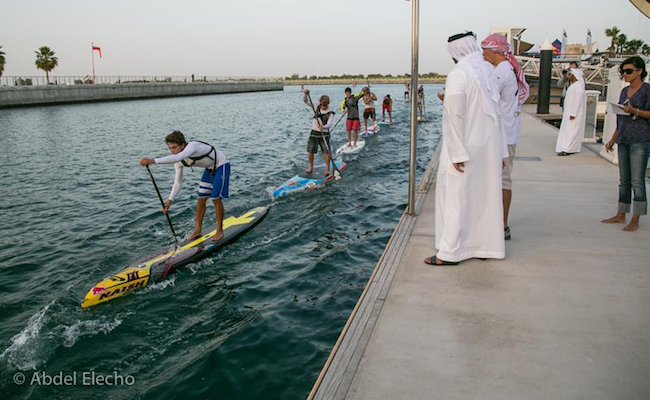 Kai Lenny (Naish) also navigated a smart race, sticking in the leading pack, but not pushing too hard too early, allowing him to be able to make the sprint on the final leg and go for gold. While he had to settle for 2nd, it was a race to the finish as he will regroup and focus on a win on Day 2 in the World Series Sprint Racing.

With a win at the All Stars World Tour Surfing, there is no doubt that Kai Lenny is looking in a strong position for the overall Title of ‘Abu Dhabi All Star’. Stay tuned to see how Day number 2 of the World Series at Yas Marina unfolds atwww.watermanleague.com

Zane Schweitzer (Starboard) put on a phenomenal performance today to finish in a well deserved 3rd place. Clearly showing just how far his racing skills have progressed and training is paying off, Zane stepped it up a level today to finish just seconds behind Connor (Starboard) and Kai (Naish) to take 3rd.

Like Kai, Zane is certainly a double threat here at the Abu Dhabi All Stars and will not only be looking for a strong overall result for the World Series Racing, but also for a solid finish in the overall All Star leaderboard. Stay tuned for Zane in LIVE action tomorrow in Yas Marina at www.watermanleague.com 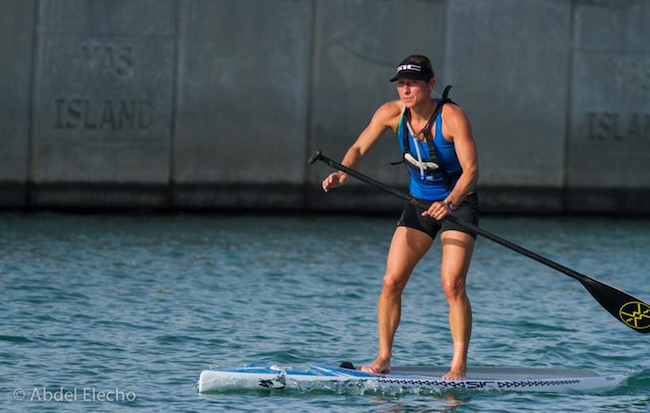 In the women’s fleet it was Lina Augaitis who arrived at her first World Series event to dominate the long distance and take the win on day 1. Lina took the lead on the 1st leg, at first battling with Manca Notar (Naish) from Slovenia through the first few laps, but then breaking away to build a strong lead by the closing lap to make it an amazing first showing here at the Abu Dhabi All Stars Grand Slam. Lina will now be resting up and preparing for the World Series Sprints that will be coming to you live from Yas Marina here in Abu Dhabi.

Aline Adisaka (New Advance) has been continuously improving over the past few years and is now seen as one of the leading talents on Tour. She reaffirmed this with another strong finish here at the Abu Dhabi All Stars Grand Slam. Taking out the ever powerful Candice Appleby in the quarterfinals, Aline went onto meet her great friend and eventual event winner Izzi Gomez (Starboard) in the semis, and while she wasn't able to make the finals, she put up a good fight and it was a closely fought battle. Aline is certainly a talent to look out for on the Stand Up World Tour as we pass the mid point of the year and look towards potential World Title scenarios.

In 3rd place, Kelsa Gabehart continues on from her Brazil performance in World Series

Kelsa Gabehart (Fanatic) continues her great form from Brazil to post another strong finish, crossing the line in 3rd place. Battling with France’s Olivia Piana (Fanatic) through the first 4 laps, Kelsa was able to break away through laps 4 and 5, to cross the line in 3rd on the 6th and final lap. A great performance from this powerful US paddler, but also from the French Racer and 2013 Abu Dhabi All Star Olivia Piana (Fanatic).

Mo Freitas (Focus SUP) put on a solid performance, matching a strong training regime with skill and a smart strategy for today’s race to finish in 4th. Likewise, Leonard Nika (Starboard) and Casper Steinfath (Naish) both powered their way round the 6 lap course to finish in 5th and 6th respectively, as Europe and Hawaii stood strong, and Maui took 1,2 and 3.

Eric Terrien puts on the most valiant performance of the day 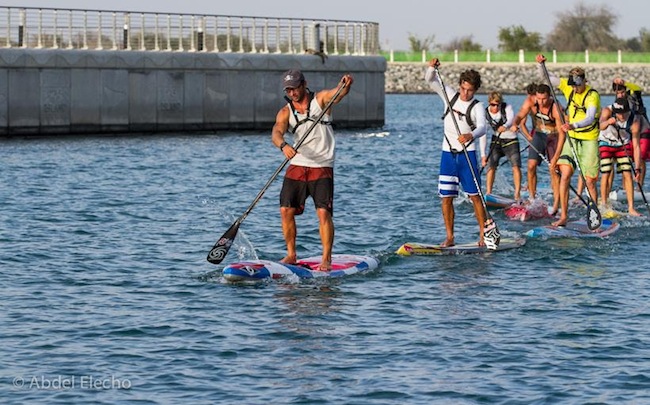 Meanwhile the most valiant effort of the day goes to Eric Terrien (Bic SUP) from France, who led the race with the the top 10 on his tail for 3 out of the 6 laps, unfortunately unable to dig deeper on the closing straight to retake pole position. Eric finished in 7th place today.

Current Ratings leader Angie Jackson (Fanatic) from Australia is forced to withdraw, taking ill coming to the close of lap number one. A frustrating turn of events for this powerful paddler from down under who was looking to consolidate on her performance from stop 1 in Brazil. However, she is recovering well and hopes to be able to pick back up again tomorrow for the World Series Sprints. Stay tuned to www.watermanleague.com

Yas Marina provided an unsurpassed backdrop and high performance race course for World Class Racing action that mirrors the Formula 1 track that sits behind it, as the World’s best put on a show of just how far World Series Racing has come.  Make sure to go to www.watermanleague.com for full recap, results and timing, as well as galleries and highlights to follow Meanwhile, the tension now mounts as Yas Marina prepares for the World Series Sprint Racing that will go LIVE at 3pm tomorrow. Make sure to tune into www.watermanleague.com