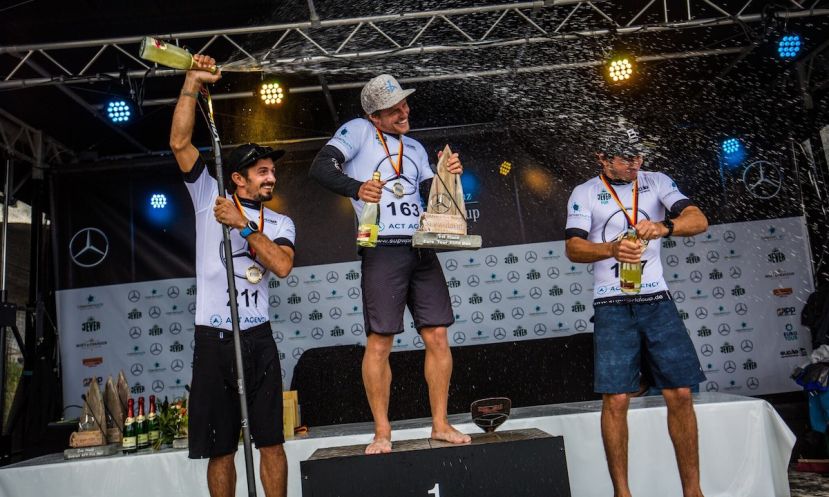 Michael Booth getting a champagne shower atop the podium in Germany. | Photo: Georgia Schofield

PERTH, Australia - Australian Michael Booth has won the 2017 EuroTour Championship, winning four events and coming second in another of the EuroTour’s prime-star Stand Up Paddle (SUP) races. Booth’s EuroTour Champion title was confirmed at the San Sebastian Paddle Tour in Spain on the weekend 17-18 June; the seventh stop of the EuroTour SUP. And his dominance continued last weekend winning at stop #8, the Mercedes-Benz SUP World Cup Scharbeutz in Germany. There are 10 stops on the Euro Tour with stops #3 to #7 weighted the most in points. Even with three events to go, Booth’s lead meant he couldn’t be beaten.

Originally from Newcastle, Booth, who now calls Perth home, burst onto the SUP racing scene just three years ago. However, he is no stranger to the water. He has competed and represented Australia at World Championship level in SUP, Sprint Kayaking, Ocean Ski and Surf Life Saving.

In November, Starboard competitor Booth was crowned ISA SUP Marathon World Champion after winning the 2016 Fiji ISA World SUP Championship, a 17-kilometre marathon race from Cloudbreak to Musket Cove. Now, EuroTour Champion has been added to his growing list of accolades. Booth’s EuorTour campaign started when he won the SUP Race Cup in Sainte Maxime in the south of France in May; stop #3.

“Sainte Maxime was the first event of my tour and I knew it was important to start out strong. After finishing third on the first day in the beach race, I was only 16 seconds behind going into the distance the following day. After sitting in the pack for the first 10 kilometres, I made my break on the turn home and never looked back,” 26-year-old Booth said.

He won by nearly two minutes, cementing the overall win for the weekend. One week later at stop #4 in Hossegor on the West Coast of France, Booth finished second in the 4-kilometre surf race and third in the 9-kilometre distance race, finishing the event second overall. He went toe-to-toe with world ranked number one Hawaiian Connor Baxter to only just get beaten.

“Hossegor wasn’t an event I expected to do well in, so it was a huge confidence booster for me and put me in a stronger position for the overall series, which was my goal this year. From then, I focussed on winning the championship,” Booth said. 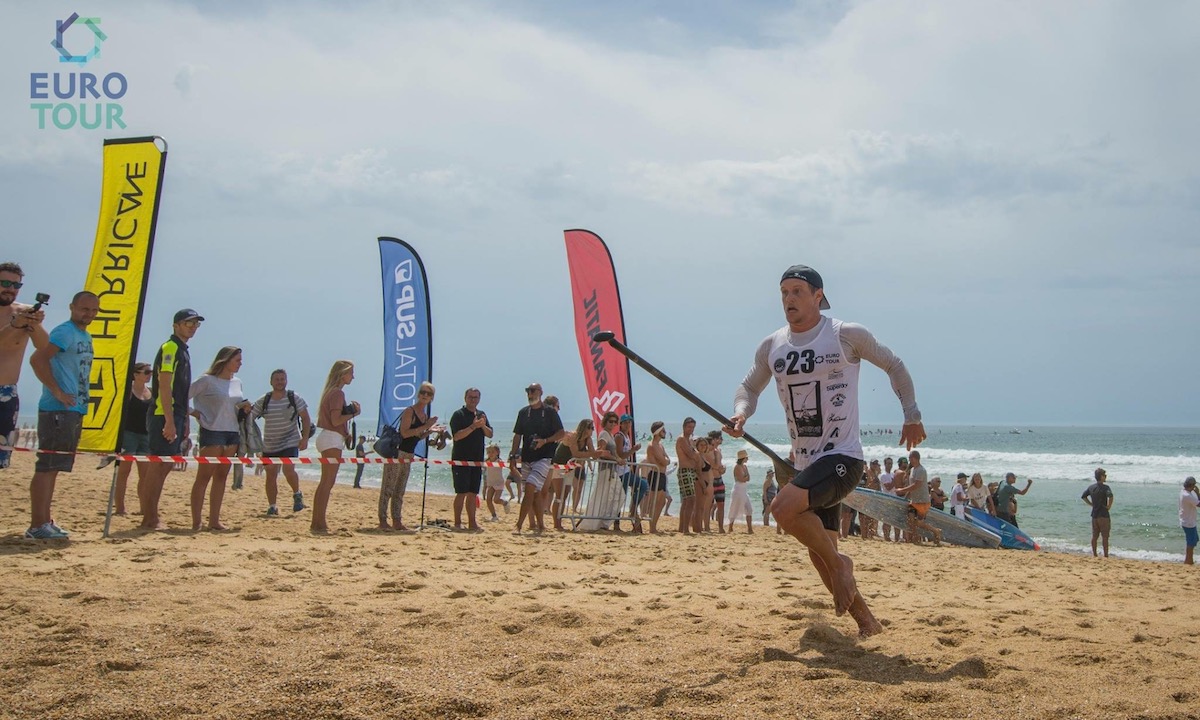 Stop #5, the Thonon-Les-Bains Wue SUP Crossing from Switzerland to France was a powerful performance from Booth, winning convincingly by more than two minutes. Booth capitalized on the chop of the 18-kilometre paddle from Lausanne across Lake Geneva to Thonon to breakaway early.

With the EuroTour title ready for the taking, nothing was going to stop Booth at the Iberdrola Bilbao Wold SUP Challenge in Basque Country Spain, stop #6. The exciting flat-water race came down to a sprint finish. “This was the one I wanted - I knew that if I took victory in Bilbao I could win the EuroTour which is the biggest SUP tour outside the World Series. I’m stoked!” Booth said.

After winning again at stop #7 San Sebastian and stop #8 in Germany, Booth’s dominance has cemented his position as the strongest paddler this European summer.

“It has been awesome to compete in Europe and race well against the best SUP racers in the world. The EuroTour is a huge achievement – I’ve worked hard and I’m really proud to win. It was one of my goals for this year and it feels so awesome! I couldn't do it without the strong support I've received from Starboard, Shaw & Partner and Imano, as well as my gorgeous girlfriend Kristy.” 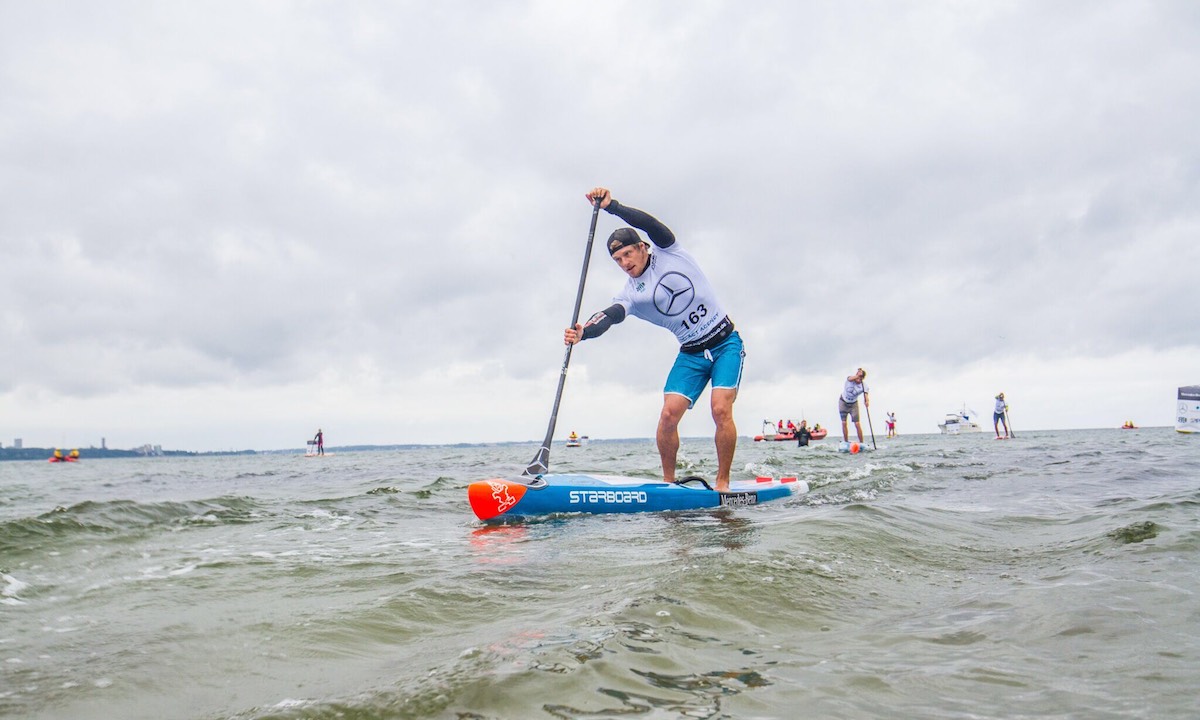 Michael Booth coming in for the win at the Mercedes Benz World Cup. | Photo: Georgia Schofield

Booth said he would return to Perth (Western Australia) for a short break before commencing training for the ISA World Championships in Denmark in September.