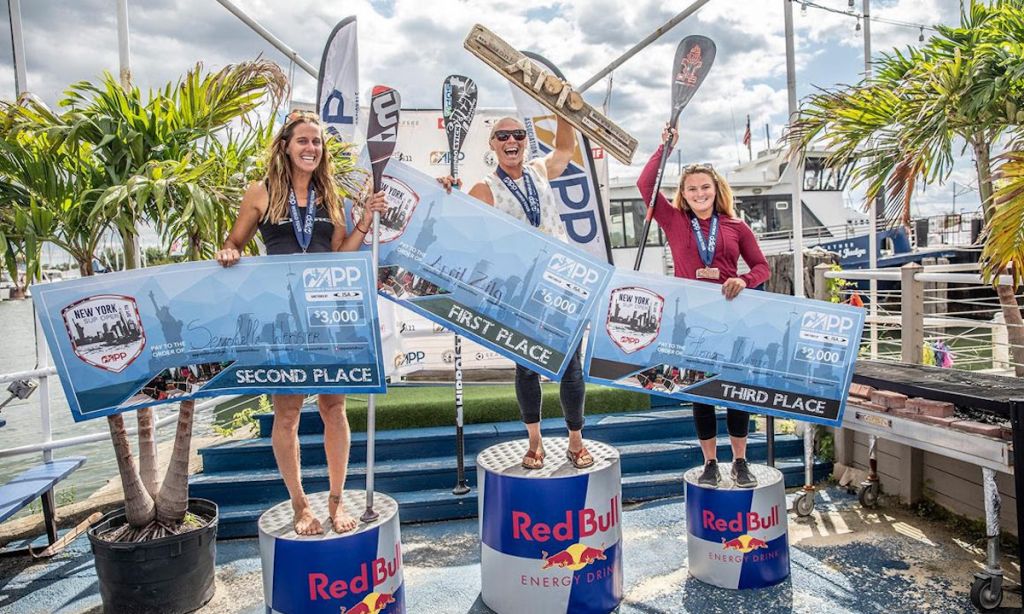 NEW YORK CITY, New York - It was an epic final day of action at the New York SUP Open, as crystal clear blue skies and perfect conditions greeted the APP World Tour athletes as they assembled in front of one of the most recognizable skylines in the World: Manhattan, New York for the final showdown of this mega event that is stop #2 of the 2019 APP World Tour.

After a spectacular day of surf sprint racing out at Long Beach, NY, the athletes prepared themselves for the 13.5km course around the Statue of Liberty - for many, the opportunity of a lifetime, and for the APP World Tour athletes, the second annual expedition on the Hudson. It wasn’t to disappoint, as the athletes went blow for blow in one of the most exciting distance races yet for both men and women, with France’s Arthur Arutkin finding his 2018 form to repeat victory here in New York in the men’s division, while April Zilg won her first ever APP World Tour event, and, on her birthday. 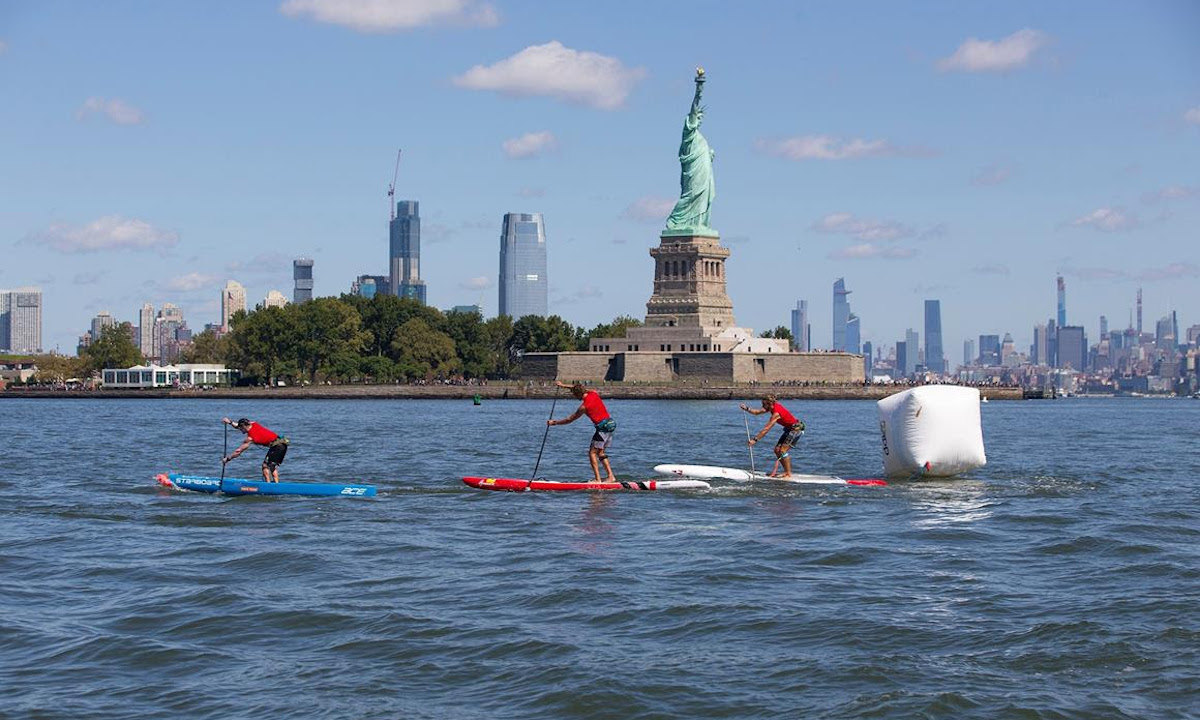 In the Men’s fleet, it was a tightly contested affair that saw Michael Booth from Australia in control for much of the race, something that has become expected here at the very top of the sport, with his impressive conditioning and distance tactics making him one of the favorites across the majority of the distance races on Tour.

However, the 2018 World Champ, Arthur Arutkin, kept right with him, challenging him throughout the course’s duration, taking advantage of a rare slip up by the Australian powerhouse that allowed him to take the lead, and break away from Michael. It was an unforced error, but a costly one for Booth, as despite a charge to the finish to catch Arthur Arutkin, he had to settle for second in the distance and 4th overall for the event. However, after his strong finish in London, Michael is still in second place overall after stop #2 of the 2019 APP World Tour.

For Arthur, it was an incredible day, as he was able to repeat his 2018 success here in New York to take the win amidst a stacked field of the World’s very best athletes, not only securing the overall New York SUP Open Title for the second year in a row, but propelling him back to the top of the leaderboard after stop #2 of the 2019 APP World Tour. After a slower start in London, we are clearly seeing the talented Frenchman click into gear here as we head into the backend of the year. 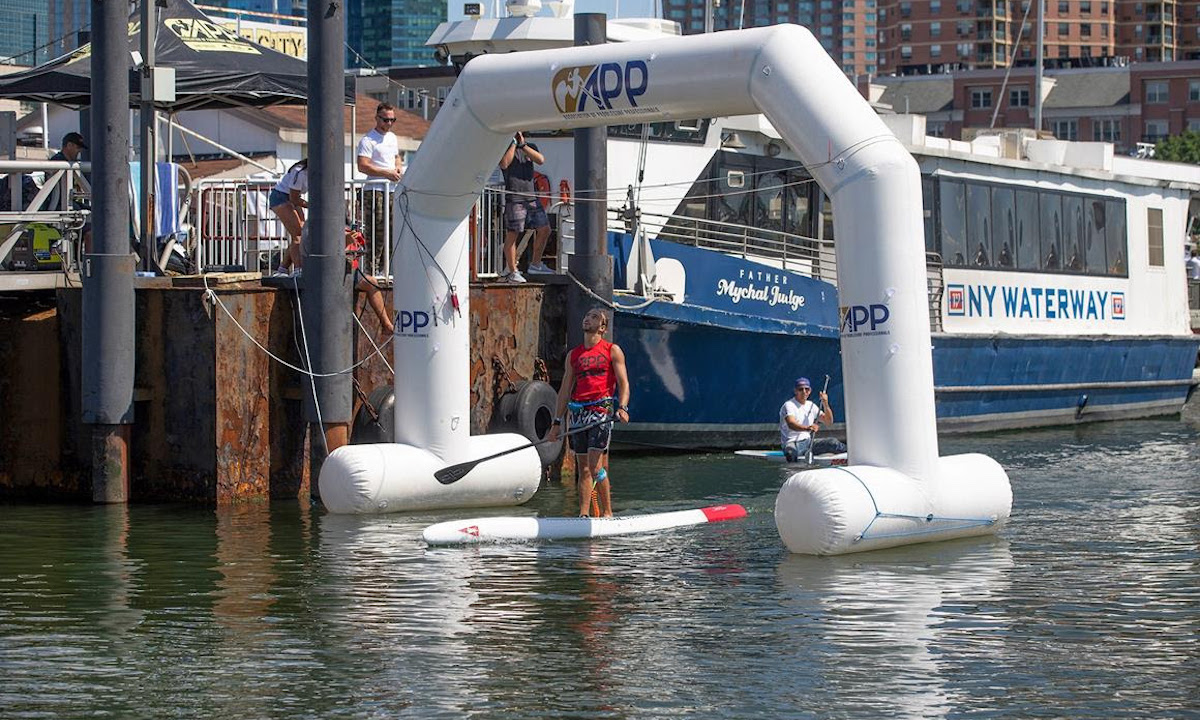 One of the standouts of the weekend of racing was Martin Vitry from France - certainly not a new face on Tour, but definitely finding himself in this all important second stop of the 2019 APP World Tour Season, clearly showing that he is a force to be reckoned with in both distance and sprint racing.

With a 3rd in the distance race around Liberty and a 2nd place in the Surf Sprints in Long Beach, Martin has firmly put himself in contention in 2019, shooting up to 5th place overall after Stop #2. With a throw out permissible for their overall standings, if Martin can keep up this form through the backend of the season, he will be able to to discard London and have a real shot at the Title.

Meanwhile, it was great to see racing legend, Georges Cronsteadt step up to the plate in the distance race around Lady Liberty, finishing in 5th place amidst the very best in the World. Georges is a leading light for the Tahitian crew, that consists of a wealth of talent and potential here on the APP World Tour. We look forward to seeing them all in Osaka in just a couple of weeks. 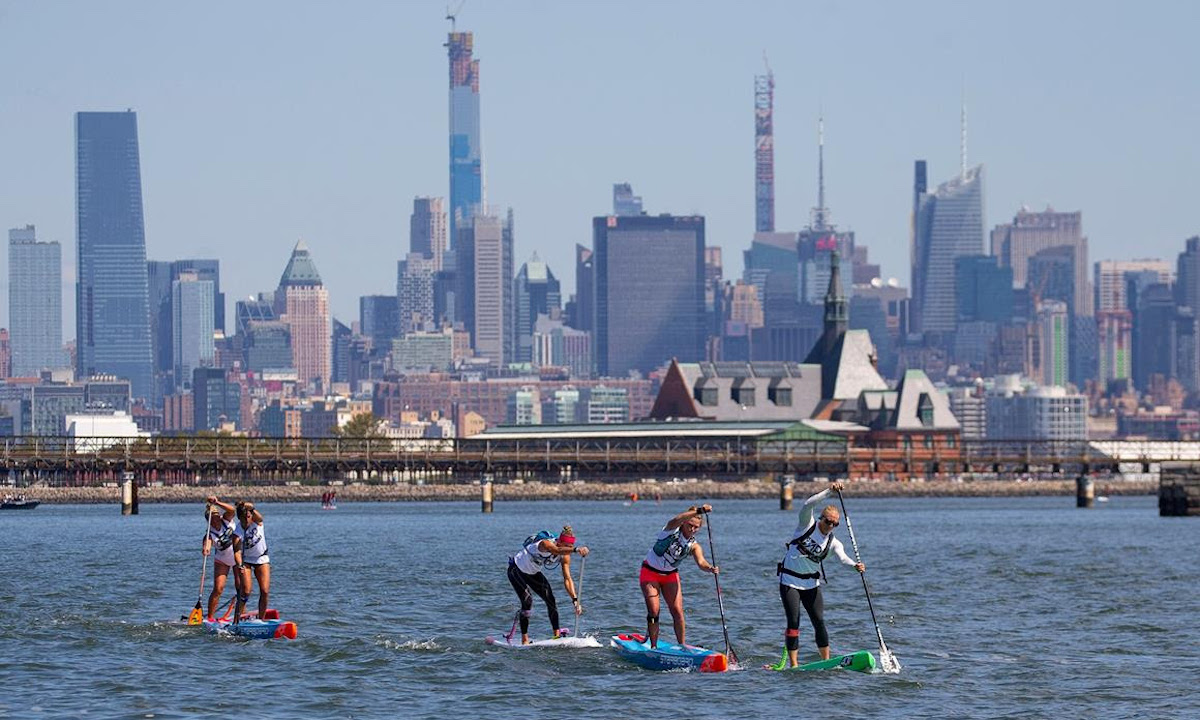 In the Women’s fleet, the bump on the course generated by the powerful tidal flow on the Hudson created some exciting battles, as Fiona Wylde was in her element, but up against the formidable might of April Zilg, who seems on a impressive roll in 2019 here on the APP World Tour.

The lead went back and forth throughout the race, but April’s drive and commitment paid off as she was able to cross the line first, 21 seconds ahead of Fiona in second. It was an impressive performance from both ladies, and great to see Fiona Wylde back on Tour and back in form here on the APP World Tour in 2019.

A 3rd place overall here in New York propels Fiona up to 3rd overall after stop #2 of the Tour, with Osaka coming up next, followed by Red Bull Heavy Water, sure to be a strong suit for the versatile athlete from Hood River.

Meanwhile, the win in the distance combined with her 3rd place in the sprints brings April Zilg closer to the World #1, Seychelle Webster, whose performance in New York, was once again impressive, and enough to keep her in the top spot (she won the sprints, finished 4th in the distance and 2nd overall for the event). 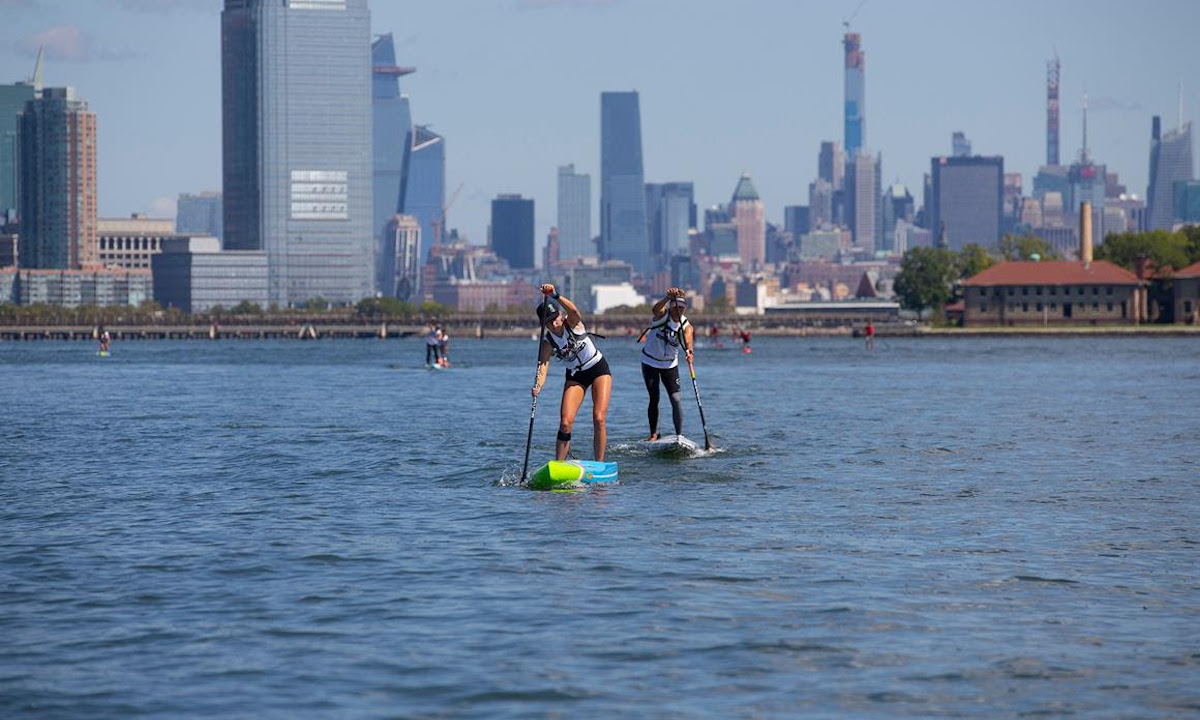 Outside of the Top 3, the Women talent on Tour is growing exponentially, with stand out performances in New York. Pictured above, Annie Reickert holding strong. | Photo courtesy: APP World Tour

Annie Reickert is always a threat, and an incredibly versatile athlete, with her 2nd place in the surf sprint racing a testament to this, which combined with her 6th place in the distance puts her in 4th overall for the New York SUP Open and 7th overall on the Tour after Stop #2. For such a young athlete, the future is bright for Annie as she looks ahead to Osaka to continue to build on the foundations she has laid.

We also saw the welcomed return of our 2018 World Champion, Shae Foudy, who despite still very much in recovery from her injury from earlier this year, was still competitive and able to finish in 7th overall for the New York SUP Open.

Finally, Yuka Sato continued to keep herself in the mix with a 5th place overall for the event, and keeping her in the mix at 4th overall on the APP World Tour after stop #2. As we ramp up for the next stop in Osaka, Japan in just a couple of weeks, there is no doubt that she will benefit from local knowledge and home town confidence, so watch out for Yuka and her quest to ascend the rankings on the 2019 APP World Tour. 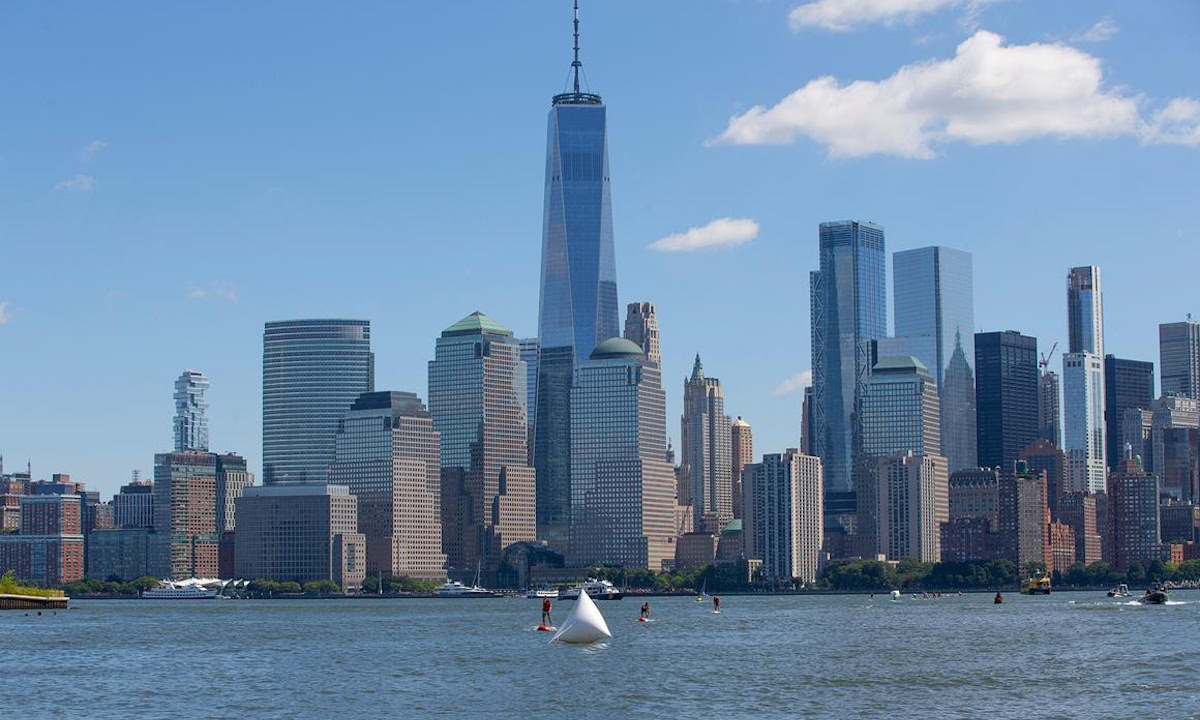 The New York SUP Open wraps 8 days of incredible action from the most complete event in the sport in the City that never sleeps. | Photo courtesy: APP World Tour

That wraps what has been an incredible 8 days in New York for stop #2 of the APP World Tour. We saw spectacular surfing with worthy champions in the form of Luiz Diniz from Brazil and Izzi Gomez representing Columbia, while in the racing, the competition was equally as intense, with Arthur Arutkin from France and April Zilg from the USA coming out on top.

The international flavor on the APP World Tour never ceases to amaze, with over 24 countries now participating on Tour, and new talents rising up through the ranks from all new territories, as the sport of stand up paddling is set to reach new heights over the coming year, especially on the APP World Tour.

Next up is the Osaka SUP Open, presented by Remax in Japan, taking place from the 20th - 22nd September. Make sure to stay tuned for the build up and watch all the action LIVE at www.appworldtour.com and @appworldtour.com