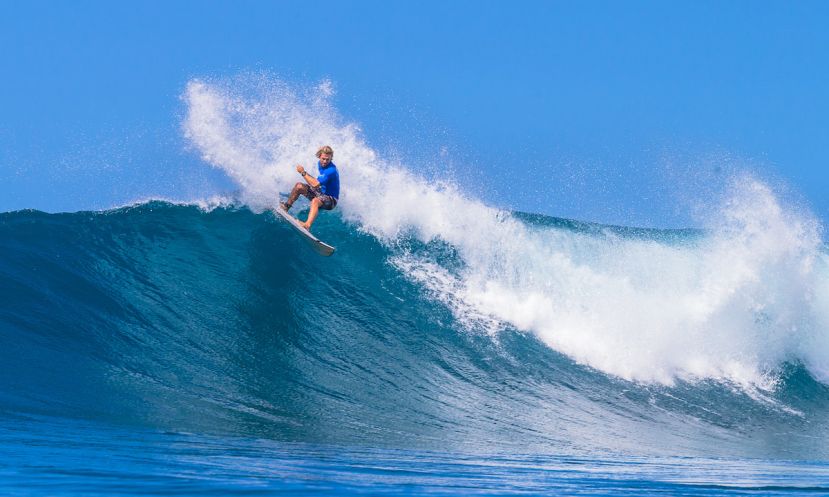 The Australians are making their presences felt as we prepare for a dramatic finals day in conjunction with a new long period swell. | Photo: APP World Tour / Brian Bielmann

OAHU, Hawaii - With just the quarters thru final remaining for the Men's division and just the Final left for the women here at the 2017 Sunset Beach Pro, tension is mounting as we build up to what promises to be a spectacular final day of action at Stop #1 of the APP World Tour.

As anticipated, the level of performance this year has once again sky rocketed, with all global regions stepping up to be counted as the rounds have progressed. Now that we are down to the Final 16, and with the forecast shaping up to provide an epic finish this year (large, long period NW swell), we wanted to take a closer look at the Contenders for the Title at this year's Sunset Beach Pro.

The Australians have thrown down the gauntlet, with just 2 athletes remaining out of what was a strong Aussie contingent here in 2017. As expected, 2nd place finisher from 2016, James Casey (pictured above) has put on a string of strong performances through the rounds again this year and clearly positioned himself as one of the favorites here in 2017.

However, returning from injury that kept him out of the 2016 season, the ever impressive Keahi de Aboitiz (JP Australia) has been clearly showing that he is not messing around in 2017, with some radical surfing and masterful positioning in the tricky Sunset Beach line up.

There is no doubt that these two remaining Aussies will be vying for a finals berth and hoping to bring the Sunset Beach Pro Title to Australia for the first time in its history (historically it has only been won by Hawaii and Brazil).

Whatever happens, it will be a show to remember, so make sure to watch it all go down LIVE and catch up on anything you have missed at www.appworldtour.com. The next call will be at 7am on Thursday morning, with a new swell scheduled to build tonight and peak in the am, with favorable wind conditions. 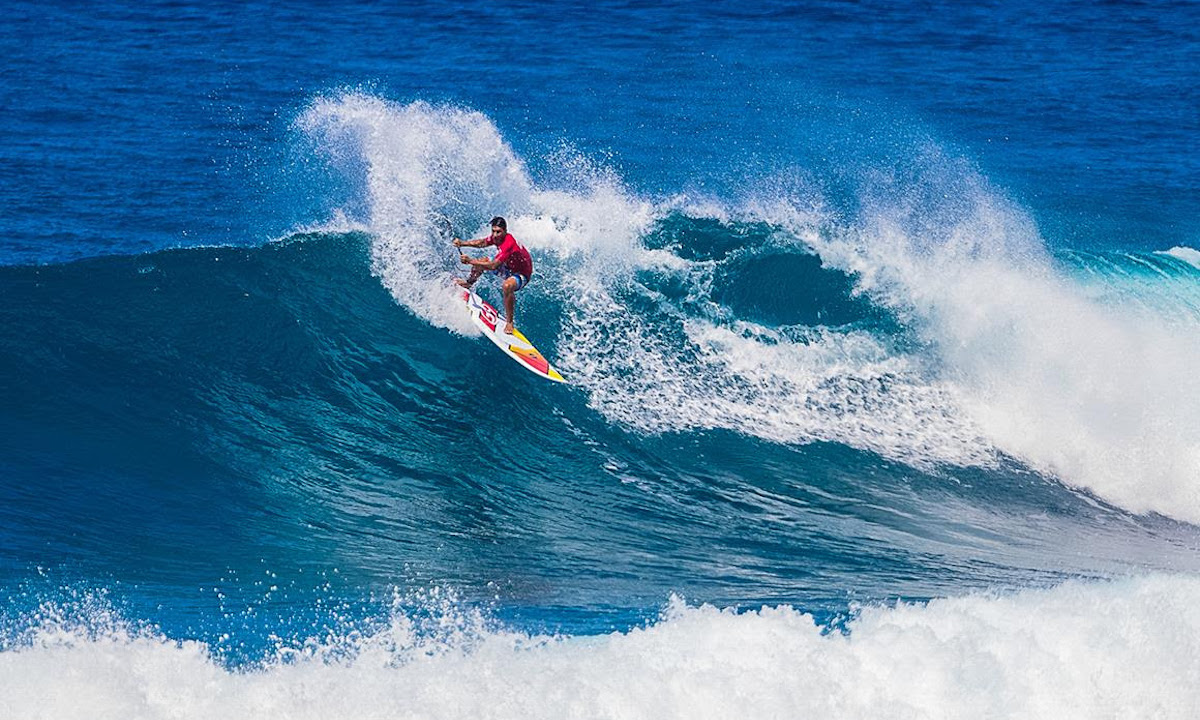 Poenaiki Raioha (F-One) has been nothing short of mesmerizing at this year's Sunset Beach Pro, notching up the two highest heat score totals of the event so far and clearly demonstrating his mastery of the Sunset Beach line up. His power, precision and flow has been mind blowing and he is certainly setting himself up for a great year ahead with form like this.

Joining Poenaiki in the quarterfinals is Frenchman, Benoit Carpentier (Starboard). Benoit had a breakthrough performance a few years back as a teenager here at the Sunset Beach Pro, a result that put him on the map and sky rocketed him to being viewed as one of Europe's great hopes on the APP World Tour. While it has been a slower last few years for Benoit on Tour, he is looking sharp in 2017 and as the last remaining European will be fighting for a finals berth with every shred of his being. 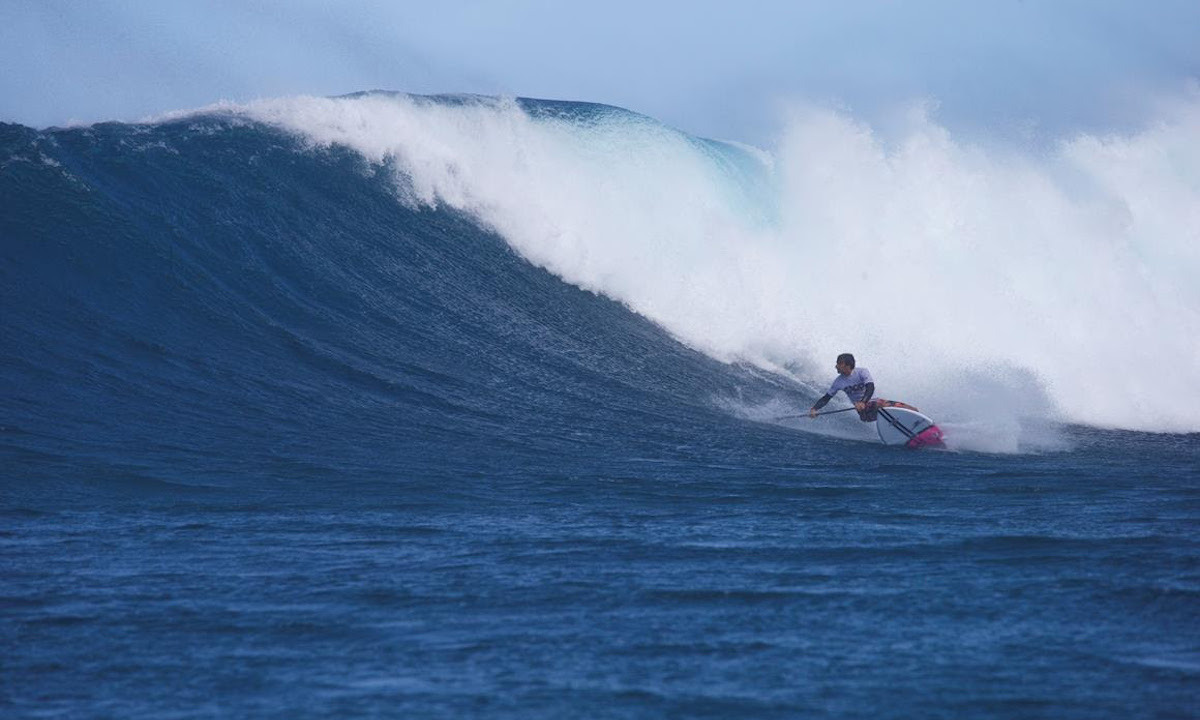 Giorgio Gomez has been on fire this year at the Sunset Beach Pro, putting on a clinic of backhand surfing at what is well known to be a tricky wave to surf well on your backhand. Giorgio's explosive approach and vastly improved read of the Sunset line up has deservedly catapulted him into the quarterfinals, where he is the last remaining US ambassador flying the stars and stripes.

However, Hawaii is extremely well represented in the final 16 with a star studded cast of characters still remaining in contention for the Title as we come into Finals Day:

Whatever happens, the Hawaiian contingent will be gunning for the Finals and to bring the Sunset Beach Pro Title back to Hawaii this year after two years in the hands of 2x World Champion Caio Vaz (SIC Maui) - it will be a battle to remember.

Brazil has had an impressive connection with Sunset Beach over the past few years, with its now 2x World Champion Caio Vaz managing to secure the Title here two years in a row. Caio has been looking dominant all event, and will be coming into Finals day as defending Champion and confidant from what has been a great start to the event, and the year for him.

However, Caio does not stand alone: behind him, other standout performances have been witnessed from the likes of Marcio Grillo (once again finding himself in the quarterfinals after a semi finals finish in 2016) and the welcomed return of Carlos Bahia to take center stage with an impressive performance on Day 3 of the event.

So 3 Brazilians remaining in the final 16, joined by one more young South American talent from Peru: Sebastian Gomez. Sebastian first burst onto the scene a few years ago as a 15-year-old talent who stole the show with a 9+ ride in his first event on Tour here at Sunset Beach. Wind the clock forward, and Sebastian has only improved his game, putting on performances to remember through the early rounds and clearly showcasing that he is a force to be reckoned with.

We are now down to the Final 4 for the women, with our impressive finalists preparing to do battle at the iconic Sunset Beach Pro. (L) Izzi Gomez / (R) Shakira Westdorp | Photo: APP World Tour / Brian Bielmann

The women's performance out at Sunset Beach this year has been everything we had hoped and then some. They took center stage in pumping Sunset and clearly showed that they deserved their place out in this iconic line up.

We are now down to the Final 4 and they certainly represent the 'form' surfers of the event so far. Izzi Gomez (Starboard) from Florida, USA had to go through the repechage to make it back into the running after a standout performance by Terrene Black from Australia, but in the semi finals was looking sharper than ever and certainly a key contender out here at Sunset.

Shakira Westdorp (Starboard) from Australia continues to make her presence felt with some of the most radical performances on Tour and as one of its biggest threats. While Sunset is tricky on your backhand as has already been mentioned, Shakira shows no sign of weakness and is looking extremely strong coming into finals day.

Nicole Pacelli, 2013 World Champion from Brazil spends a lot of time out here on the North Shore and it shows: comfortability in the line up, good wave selection and placement and the flow and critical surfing that she has already become known for. Watch out for Nicole on Finals Day, as she will be looking to bring back to the Title to Brazil.

Finally, Fiona Wylde (Starboard) from Oregon, USA has shown herself to be fearless, but at the same time calculated in her approach to Sunset. Picking off the biggest and best waves of each session, Fiona has then approached them with speed, power and flow to wow the judges and earn her one of the highest heat score totals of the event, matched only by Poenaiki Raioha (F-One). With the larger surf we anticipate for Finals Day, Fiona will certainly be one to watch out for and a prime contender for the Title here at Stop 1 of the 2017 APP World Tour. Whatever the result, these 4 accomplished women will put on a show.

To see news, results and highlights from the 2017 Sunset Beach Pro click HERE. 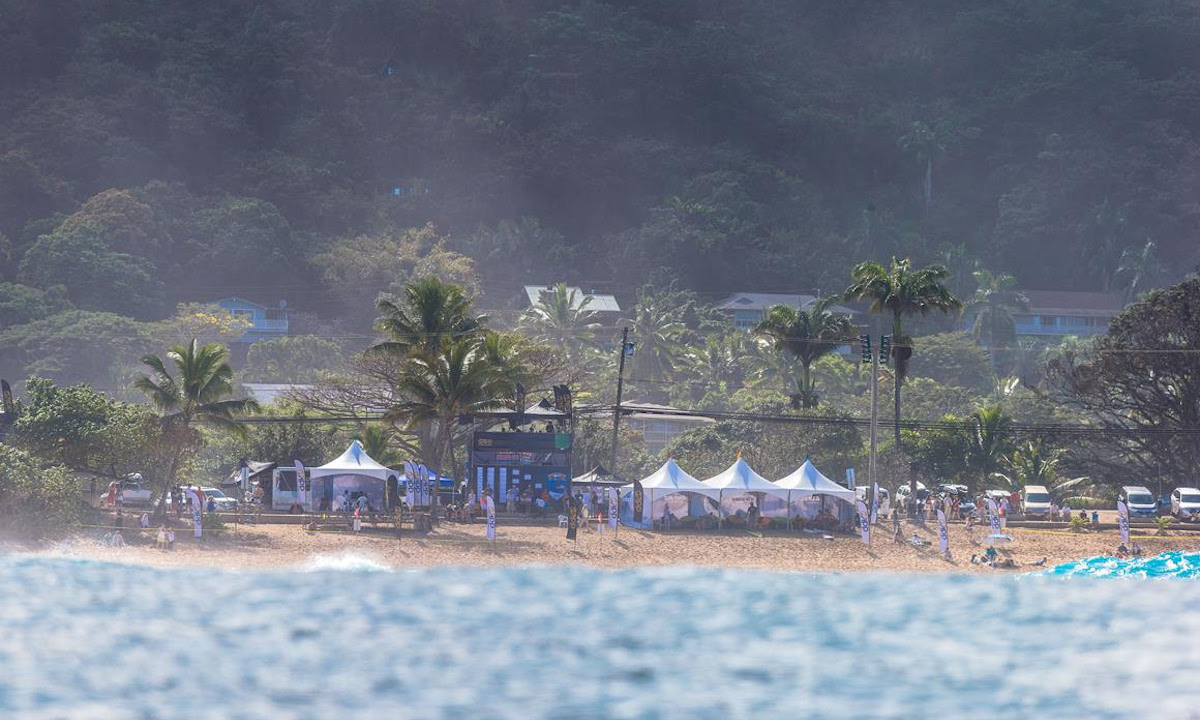