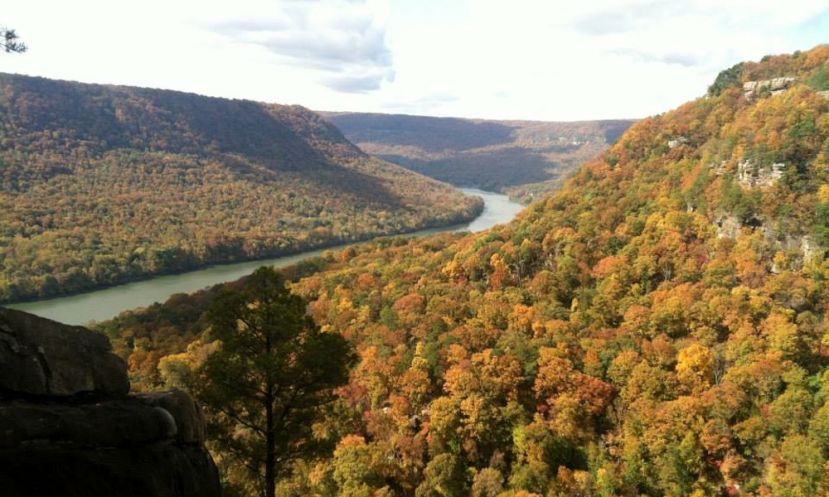 Fall colors in full effect for the Chattajack race in Chattanooga, TN. | Photo via: Chattajack.com

CHATTANOOGA, Tennessee - The 4th Annual Chattajack paddle board and kayak race is set to go off this weekend and it's guaranteed to be a great race and bigger than ever. The Chattajack is a 31-mile SUP/Kayak race in Chattanooga, Tennessee with the Chattajack course running the length of the Tennessee River gorge. The course twists and turns through a gorge with walls rising on both sides of racers 800+ feet overhead. The 2015 Chattajack is taking place this Saturday, October 24 and will host 300 racers, up 100 from 2014. The 300 spots sold in 11 days upon registration opening 6 months in advance, which is a tiny glimpse into how awesome this race truly is.

The Chattajack attracts racers from all over the United States, and even has a pretty solid international field of competitors. There are paddlers coming from 33 states, Canada (even the Yukon!), Hawaii, Europe, the Caribbean, and more! A ton of Chattajack veterans that create the vibe of this event will be returning including, Joe Bark, Starboard's Bart de Zwart, Larry Cain, Boardworks' Michael Tavares, Patrick Broemmel and the rest of the hobosquad, 15 SUPER stoked youth, and many many more.

The Chattajack usually takes between five to eight hours and is an epic long distance paddle along the Tennessee River gorge. Along the course of the race there will be three aid stations but division winners rarely use them, but they are on hand for those needing assistance and/or rest. The Chattajack will also host board storage, pre-race check-in, award ceremony and after party from Ross’s Landing park. Ross’s Landing is located beside the Tennessee Aquarium. Just look for the big tent, boards, skis, vessels, and STOKE!! The race has also picked up so heavy premier sponsors including Toyota, Kona Brewing Company and Werner Paddles.

All-in-all this weekend is sure to be a blast as we wait to see who will come out on top. Will Larry Cain defend his title? Very possible! There's also Bart de Zwart, who typically does very well in distance races so he could easily be a contender too. There will be some racers coming for a big bucket list check, others trying to podium. Only time will tell what this weekends events will unfold, so stay tuned for the recap early next week!

To learn more about the Chattajack SUP Race, click here. Check out the virtual tour of the race in the video below!