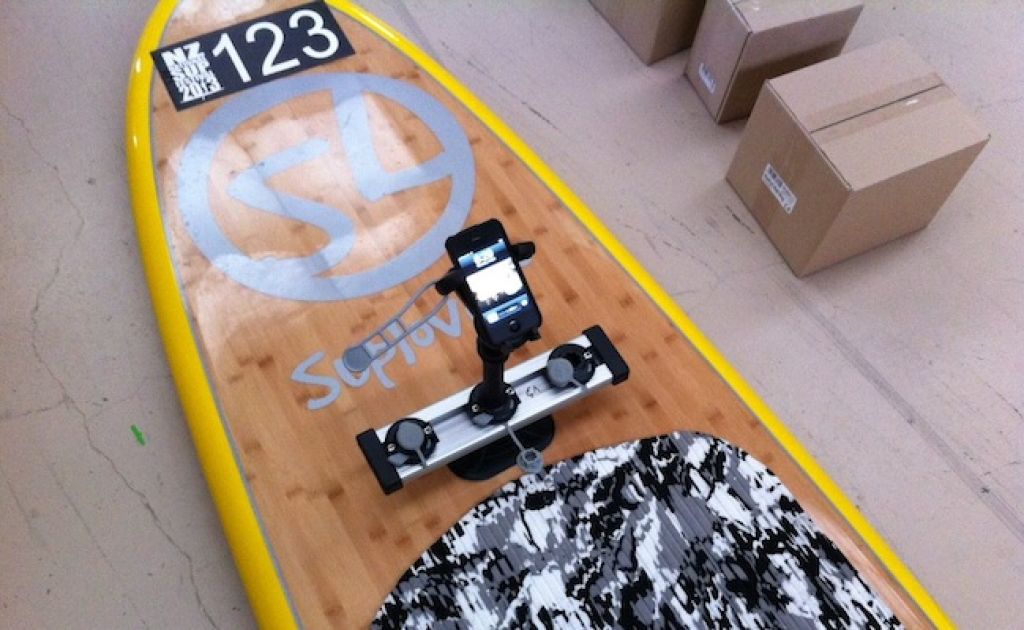 Suplove Adventurer being prepared with new mounting systems for the journey.

SYDNEY, Australia - New Zealand born Suplove Co-Founder and 2013 NZ SUP Champion,·Stuart Murray, will be embarking on a Two Oceans stand up paddle·expedition on Friday April 12, 2013. ·This wil be the first journey of SupExplore and its adventure concept paddles (ACP).

Stuart, who was one of the earliest adopters of the sport of Stand Up Paddle in Australia and who remains one of the most accomplished and accredited Stand Up Paddle Coaches, is excited about completing this challenge in his birth country and further establish Stand Up Paddle as an international destination and adventure sport.

The Two Oceans paddle, will·take Stuart from the Tasman Sea to the Pacific Ocean via Manukau and·Waitemata Harbours, finishing at the Mission Bay Reserve in Auckland. ·The estimated distance in total is 56 kilometres (almost 35 miles). In order to successfully·complete this adventure, it will be necessary for Stuart to carry his board·3km, from the eastern most point of Manukau Harbour, to the western·most point of the Tamaki River, which leads to Waitemata Harbour. This·portage route was traditionally employed by both the Maori in transporting·their canoes and also by early colonists for their trade boats.

The waterway around Manukau Harbour is particularly treacherous, this·being the site of New Zealand's worst Maritime Disaster, with 189 sailors·losing their lives in an incident in 1863. "The success of this paddle will·somewhat depend on the tides," Stuart advises, "Given the distance I will·be travelling in a (single) day and the extremely tidal nature of these harbours,·there is no margin for error. I have to get it right." The River that leads to Waitemata Harbour is the Tamaki, translating in Maori culture as "the·great serpent with eight tails" and holds much spiritual and cultural·significance to the Maori.

Stuart will complete Two Oceans on a Suplove Adventurer 11 '2". ·"These boards have an outstanding track record," Stuart comments.·"They have placed in the Open Division of the Battle of the Paddle·every year since 2010 as well as placing in many other races, both in·Australia and the USA. They are a class leading board. There's hardly·anything you can not do on a Suplove Adventurer,” concluded Stuart.

Stuart Murray is a 9 times New Zealand and Australian Stand Up Paddle·Champion, Adventurer, Master Coach, Founder of SupExplore and CoFounder of Suplove.

Suplove is the world's leading stand up paddle Lifestyle Company, founded on our values of respect for oneself, the community, the·environment and the simple joy of sharing the ocean and other·waterways with everyone, everywhere. Suplove provides you with·boards, paddles, paddle training, fitness classes and lifestyle·experiences.·