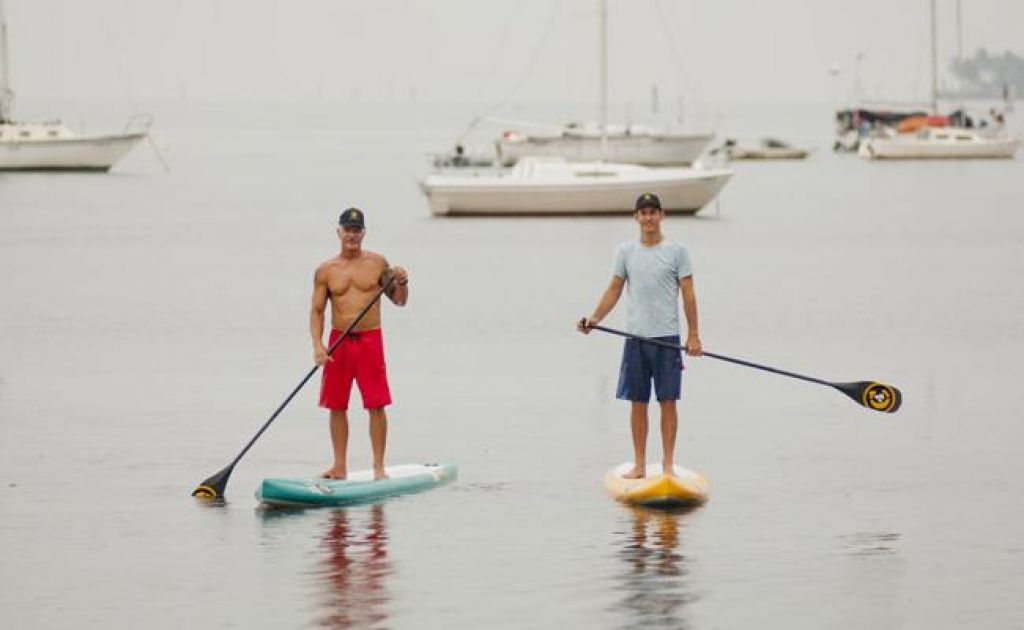 MIAMI, Florida - Last weekend watermen Bill Whiddon and Thaddeus Foote attempted the first-ever crossing of the Gulf Stream from the Bahamian Island of Bimini to the shores of Miami Beach, Florida on stand-uppaddlboards (SUPs) to raise awareness of the impacts of plastics in the ocean.

The crossing marked the launch of the Bimini to Miami Blue Water Challenge: a grueling 24 hour adventure taking paddleboarders 48miles across the deep blue waters of the powerful Gulfstream current armed with only a board, a paddle, and their wits.The intrepid paddleboarders had to endure one the earth’s most powerful oceanic currents, exposure to shifting weather conditions, extreme isolation, and all the risks of open ocean navigation in order to successfully reach their destination.

Fortunately Bill and Thad did complete the journey on June 9, 2012 and finished in 17 hours,15 minutes and traveled approximately 60.3 miles.  They rode C4Waterman boards and used FCS SUP fins.  In fact, Thad stated, "I used the 10" weed fin on my 16' board and it worked great.  It shed the sargassum weed all the way across the Stream and kept me tracking in light wind.  I had used the older model for quite a while but it was great on the bigger board."

The purpose of the crossing was to raise the public’s awareness on the impacts that discarded plastics are having on the world’s marine environments and its inhabitants.The Surfrider Foundation* is an official partner of the crossing and is fighting the proliferation of marine plastics through its Rise Above Plastics (RAP) campaign. RAP is aimed at increasing the rate of plastic recycling around the world and reducing the release of waste into the oceans. Proceeds from the event to go to support the Surfrider Foundation and their RAP programsin FL.

Prior to the journey Bill said, “Nothing of this scale has ever been attempted before, much less successful, so we really are pushing the limits of the sport….” and Thad stated that, “This crossing is a great opportunity to highlight the impact that plastics are having on our world’s ocean and how our actions, as a society, can make such a big difference.”

After the journey the men were happy to be home and would surely want everyone to know that there will be a segment on WLRN radio 91.3 FM today June 14th, 2012 during the morning, mid day and evening featuring an interview with Bill, Thad and the Surfrider team from the finish and after party at the beach landing.  It should be an interesting piece for all stand up paddlers to tune into.

Inquires for theSurfrider Foundation and their RAP campaign should be made to MarthaGreenlee ([email protected]) at 407-580-1830, or by visiting www.surfridermiami.org

*The Surfrider Foundation is a non-profit grassroots organizationdedicated to the protection and enjoyment of our world’s oceans,waves and beaches. Local Miami Chapter www.surfridermiami.org effortsinclude lobbying for the enforcement of litter laws, beach dunerestoration and K-8 environmental education.