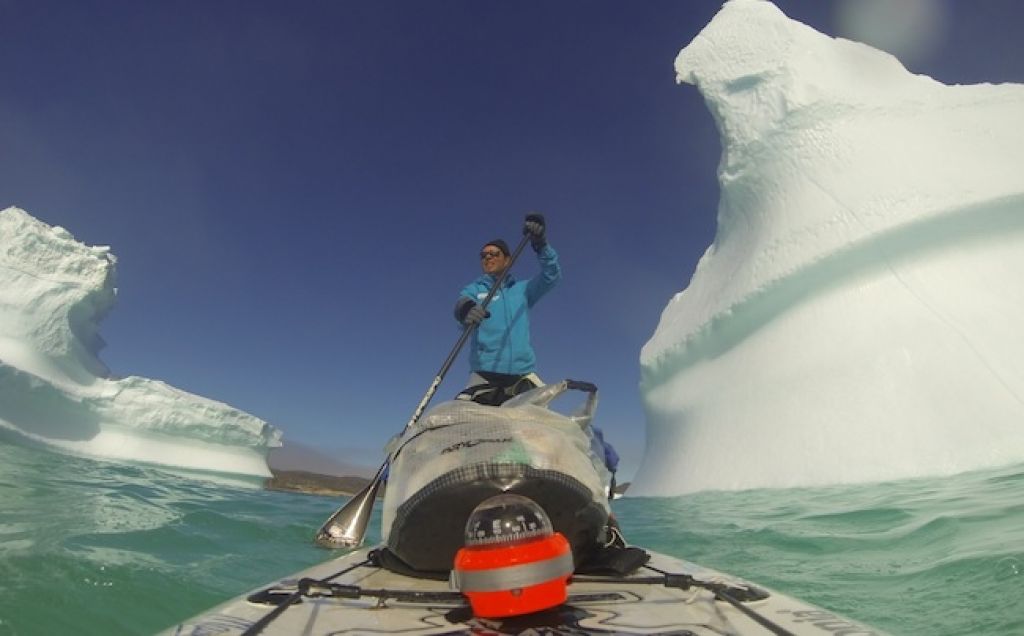 THE ARCTIC - Most of the fishermen (who had never seen a Stand up paddleboard before) were watching, when I made my first paddles strokes out of the Ilulissat’s little fishing harbor. They had been very shy and didn’t ask many questions but looked at me and smiled while I prepared to leave. I had packed food and water for 8 days, safety gear, navigation equipment, my ‘sup bed’ and plenty of warm clothes.  I also brought a 16’ Starboard inflatable, which had been easy to get on the plane with me all the way from Maui.  Inflatable SUP's are changing the way we can explore and now almost any destination can be taken on using a SUP.

The day was a perfect arctic day with blue skies and fresh but decent temperatures. In front of me was a 15-mile field of ice and icebergs. Ilulissat, which means Iceberg in Greenlandic is situated next to the most producing glacier in the Northern hemisphere. 50 meters a day and 20 billion tons every year calve from the glacier and I was paddling right between those icebergs. Needless to say, ice was everywhere. I had to work hard to find a way through it.  Wind would also make things very dangerous due to a big risk of being crushed by the ever-moving ice.

Paddling between the icy giants was very fascinating and in the beginning almost frightening at the same time. Every minute you would hear a loud, sometimes thunder like, sound of an iceberg breaking off which sometimes set a whole set of movements in motion. I saw a small piece break off after which the whole 100 ft tall iceberg turned upside down in slow motion.  An even taller iceberg totally collapsed and created waves that could easily throw you over.  I paddled and took photos until well after midnight. The last few hours was an endless sunset and then just when it seemed like the sun would set, it started to rise again.

At 2am I was just outside the ice field. From now on only the big icebergs remained which were spread apart in front of me. It was another 50 miles to Aasiaat , the next small town. But I was tired of all the paddling and excitement and it was time to go to sleep.  Not long after I tried to sleep, however, I realized that the bottom of my bed had a leak. Without any insulation between the wet board and me, it was extremely cold. On top of that, the wind picked up even more and because of all the icebergs the sea state was very unorganized, rocking me in every direction. Soon I was seasick and cold. There was nothing better to do than pack my bed together and start paddling again to get warm. With gloves and a hoody over my head, I was soon warm again, but I still felt miserably seasick and even had to throw up.

Unlike most people, after sailing for many years, I can usually handle seasickness well. Typically, when you feel sick, you throw up, wait 5 min, eat and drink to refuel what has been lost and do this again until you start to feel better. On a ship this might take a few days, but on a stand up paddle board the sickness seems to subside after half a day.

On this trip my friend Tom Hammerton was supplying me with a daily weather forecast, which I could check on my satellite tracker that received messages as well.  After studying the weather in this region for the last couple of months, I noticed how fast things change and that you couldn’t rely on a forecast longer than 2 days ahead.  On that note, this expedition should have been a crossing between Canada and Greenland but in Canada, where I was originally supposed to begin the journey, there was a 15-mile layer of ice and 4 low- pressure systems in the area.  Needless to say, the weather looked very risky. On top of that, after testing how fast I could paddle on the inflatable board with 120llbs of water, food and gear, suddenly it looked like it could be a 10-day adventure instead of a 5 day crossing with water temperatures close to freezing. With those facts, I decided that it was not worth risking my life. Life is too beautiful.

Every now and then during the journey I would see some whales close by, but they would always stay at a distance. It was mostly Atlantic Humpback whales which were obviously not bothered by the cold water. I was loving my new drysuit from Supskin, which had been so much more comfortable than the wetsuit I had been paddling in on other trips. It is made of a breathable material and is very light and most importantly, I could wear anything I liked underneath.

I tried to eat every hour and little by little the seasickness went away. Every mile or so, I would pass by a giant iceberg, tall as a building and in a different shape every time. After almost 24 hours of paddling I could see my destination and I was getting closer to the island in front of Aasiaat. The wind died completely which made it a lot easier to spot the many whales and seals. The seals would curiously pop up their head high out of the water and look around to see who was coming their way but quickly disappeared when they saw me.

Finally at 9pm at night and after 28 hours, I arrived in Aasiaat, a small town with a harbor and one of the few airports in the area. I called my wife on the satellite phone and told her that I was tired, but felt good and would continue along the coast, depending on the weather.

The following day it was sunny, but also windy from the South which was the direction I was going. I started paddling and almost gave up right away. I was doing about 1.5 knots. With this rate I would never get to Sisimiut, which was still 120 miles away.  In the next days I paddle little by little South, moving from one small camping spot to the next. Sometimes I slept in forgotten villages of 3 houses, where the owners left a long time ago to the ‘bigger’ towns with more facilities. With a population of only 57,000, Greenland is struggling to make any infrastructure beyond the bigger towns.  Other nights I would find a small quiet bay with a view over the ocean and an endless stream of ice bergs floating by which kept amazing me with their many shades of white and blue.

After a week on the board paddling between Ilulissat and Attu, I got to Kangaatsiaq, a town with 460 inhabitants.  This location was big enough for a supermarket with incredible Danish pastry and a little harbor where I found a fisherman who gave me a ride to Aasiaat where I checked in to ‘The Seaman Hostel’.  Over the last few days the weather had been a little overcast with a few showers, but now it was pouring and the temperatures dropped even more. Inside my little room it felt ridiculously warm, but maybe it was me, maybe I started to get used to the harsh weather.

The next 2 days during my 7 flights to get back home to Maui, I had plenty of time to reflect over the last 2 weeks.  It had been an amazing adventure. The Arctic is an incredible place to be, a place where it is still very unspoiled, raw and remote but also has a harsh and difficult climate to live in. In Greenland they have started to feel changes due to global warming. Every year the glaciers and ice are withdrawing. In the last decades there has been a 3.6% decline of sea ice per decade. I went to Greenland inspired by the documentary ‘Chasing Ice’ where James Balog shows (with 25 time laps cameras) mountains of ice in motion as they disappear at a breathtaking rate.  I am glad I had the opportunity to experience this incredible place and realize how much more, so much more, there is to explore...

This Arctic Expedition was only possible with the help of my main sponsor STARBOARD who has supported me over the years in many ways.