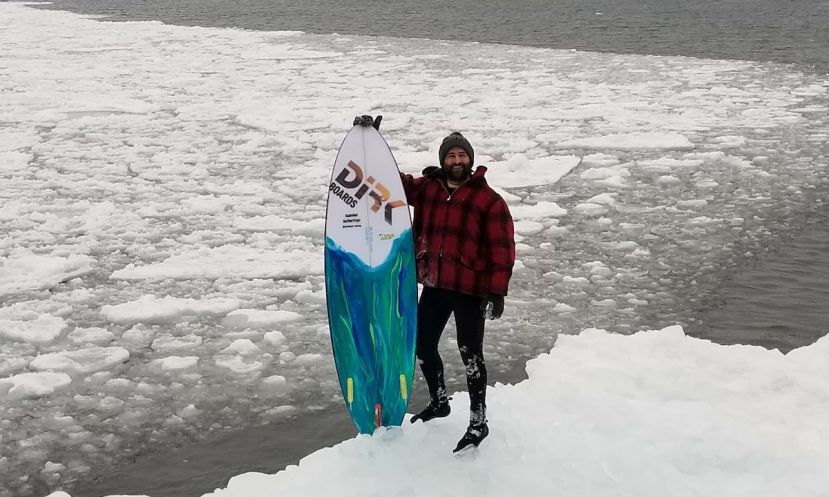 MARQUETTE, Michigan and FAIRHOPE, Alabama - Adventures continue for Great Lakes surfer Daniel Schetter, the cold water endurance athlete whose story went viral last month as the “Ice Beard Surfer” who brought -30 F Big Lake surfing to the world. Followed from China, France, England, Spain and Russia the sight of an ice encased man on the water captured the imagination of the world, among them, DIRK Boards, a custom surf and SUP builder on the Gulf Coast.

“I liked his energy and commitment to living an intended, unique life and saw him as the perfect ambassador for our custom boards,” said Dirk McCall, owner of DIRK Boards, who built the “Daniel Schetter Superior Model”, a surf board with a solid carbon fiber deck with Schetter’s name prominently featured. “Surfer Dan is a guy that embodies an ideal that many outdoors lifestyle enthusiasts pattern themselves after. He is Surfer Dan.”

The Ice Beard Surfer immediately took his new board into Lake Superior’s ice flow. It was a new moment in surfing. “I’m very excited to be an Ambassador of DIRK Boards,” said Daniel Schetter. “It’s a high-quality board built for extreme conditions and personalities.”

About DIRK Boards:
Dirk McCall builds custom surf and standup paddleboards in Fairhope, AL on Mobile Bay. The California native painting contractor and artist moved to the Gulf Coast in 2015 and began building boards, defying the notion that you can’t surf the Gulf. Custom shape, color and graphics keep him excited to make art that can be surfed, using the best materials in creating strong, ultra-light boards.

About Daniel Schetter:
Daniel Schetter regularly live streams events in nature and life with his dogs, local wildlife and all things Ice Surf. Visitors to his cabin on the Upper Peninsula (UP) of Michigan make this a stop on the surf tour from as far as France. “Other guys are surfing the lakes, but most can’t keep up with me when it gets this cold,” said Schetter, AKA “Surfer Dan.”