Romney (left) riding his hasake at La Jolla Shores in San Diego, California while another hasake (right) sits at the beach in Tel Aviv.

Hasake is a board-boat hybrid of the Stand-up Paddle (SUP) Board family, with alleged Israeli and Arabic roots, possibly dating back to as far as the 8th century A.D. There are some striking parallels between the Hasake and its increasingly popular Hawaiian cousin. But one of the many things that sets them apart is information. While the Hawaiian SUP has seen a worldwide surge in popularity and much has been written about it, the alleged Isreali-Arabic SUP still remains under the radar for most of the waterman community. This article attempts to shed some light on this fairly unknown watercraft. Or better yet, it provides a tentative picture over which further agreement and disagreement can be built. The following topics will be considered: basic features, origins, uses and environment, riding waves, and Hasake today. 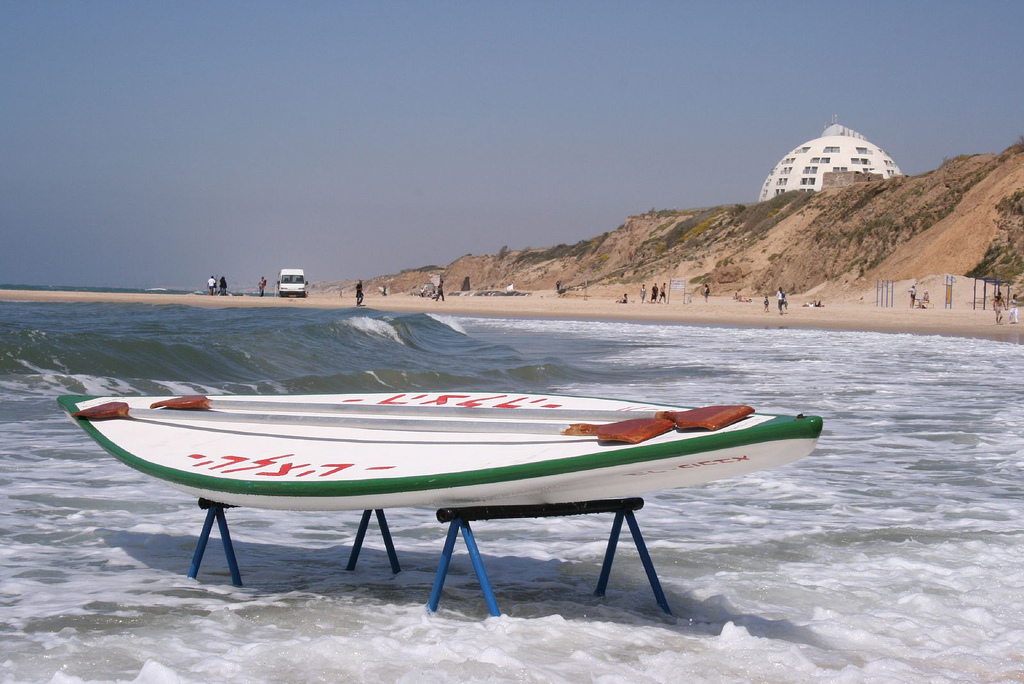 To begin, let’s consider some basics of the Hasake. The board-boat hybrid, from hereon simply ‘board’, normally ranges between 14.5ft. to 15ft. in length, measures about 60in. wide, and has a keel all throughout its bottom, much like the keel of a vessel, which extends from the hull to provide stability. Aside from the keel, there is nothing in it resembling a fin. The construction, although originally in wood, is now of the typical threefold combination: blank, fiberglass, and resign. The blank is either polyurethane or polystyrene; the fiberglass in the 9OZ. range; and the resin either polyester or epoxy, depending on the choice of blank. The average overall weight is approximately 100lbs., but some polystyrene/epoxy constructions fall below that mark.

There are two accessories essential to the Hasake: paddle and dolly. The paddle is roughly 10ft. in length, double bladed, and with each blade spanning about 7in. wide, and featuring an asymmetrical shape. The blade and shaft come in a variety of materials, including wood, fiberglass, carbon fiber, and aluminum. The weight, flex, and durability of the paddle changes drastically depending on the choice of material, but the standard fiber glass choice falls in the 50OZ. ballpark. The dolly is an integral part of the equipment, at least if one’s back is to remain healthy. The combination of 60in. in width and 100lbs. in weight renders the Hasake barely portable if not hauled by a dolly. And here, practically anything with wheels is handy, as long as it can accommodate the board’s width and weight, in addition to the quickness of the sand. And note, there is no use for a leash when riding the Hasake, unless, of course, the surfer wishes to dislocate his leg, for given the board’s weight this is practically inevitable if wearing a leash.

Although the origins of the Hasake are virtually unknown, there are a few tenuous leads that might point the way to its age and birthplace. Now first, let’s tentatively pinpoint the birth of the Hasake in the temporal spectrum of history. The Hasake was originally “designed for near shore fishing by Arabs and later adopted as a vehicle for the lifeguards,” according to topsea.com, an Israeli surf website. But here the reference to Arabs tells us little about the origins of the Hasake. If one were to guess, the invention most likely came about during the Islamic Renaissance, when the Arab world made valuable contributions to nautical science. This dates the Hasake anywhere between the 8th and the 13th century A.D.

As to the place of birth, there are basically no leads at this point. The candidate locations are far too many, ranging from the waters of the Persian Gulf and Mesopotamia to those of the Mediterranean and Red Sea, plus the places in between, like the Sea of Galilee, among others. One likely lead is the significant presence of Hasake’s in Tel Aviv, Israel. There, the boards are still in use, sometimes for fishing and other times for leisure. But particularly, it has become a trademark of the Tel Aviv lifeguard, who uses the Hasake as a rescue device. So based on the tenuous leads available, our working hypothesis dates the board anywhere between 1,300 to 800 years old, with the shores of Tel Aviv as its birthplace. 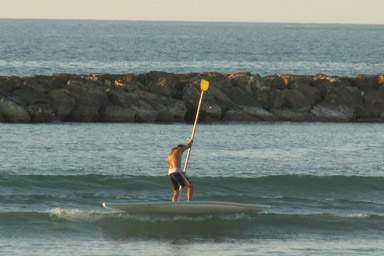 The forces driving the Hasake’s shape are also enigmatic, but, if we assume the original use to be fishing, then we can at least explain some of the board’s features, especially its width. According to an Israeli native, who now lives in San Diego, California and goes by the name of ‘Romney,’ the Hasake was used primarily for three types of fishing: net, line, and spear fishing. Of these three, net and spear fishing give us a valuable insight into the board design. “The ability to stand on the board,” says Romney, “gives the fisherman a vantage point to spot the fish.” But spotting the fish isn’t all: the net still needs to be cast and the spear thrown. And here is where the need for a steady platform comes into play. With the usual pendulum physics of casting a net and throwing a spear, the board had to be wide enough, lest the fisherman falls in the water. This, at least tentatively, accounts for the board’s robust width. Other uses, such as transport and rescue, have likely also played an integral role in the shaping of the Hasake.

But then, in the transition to surfing, the environment where the board was used probably had little impact trimming the board’s width. In the surf conditions of Tel Aviv, the nearly-flat, wind-swell waves rendered the board’s width an advantage, rather than a liability. The little waves called for more buoyancy to increase speed, instead of less mass to drive maneuverability. Yet another plausible explanation is its versatility of use. Arguably, the board didn’t undergo a drastic change in shape, for its primary use was fishing, while surfing was reduced to a tangential activity. Someone like Romney, however, who claims to be one of the Hasake surfing pioneers, would likely take issue with this explanation. For after all, he shaped himself a Hasake strictly for the purpose of surfing. The only significant change in shape was in length, down to 13ft., for he wanted the board to fit his extended-size Ford van. And Romney perhaps is right. The Hasake is arguably a perfectly suitable board for Tel Aviv-like waves, even though it’s obviously inadequate for bigger, steeper surf. But since the board was used primarily in Israeli waters, the calm surf probably had little impact altering the board’s shape. 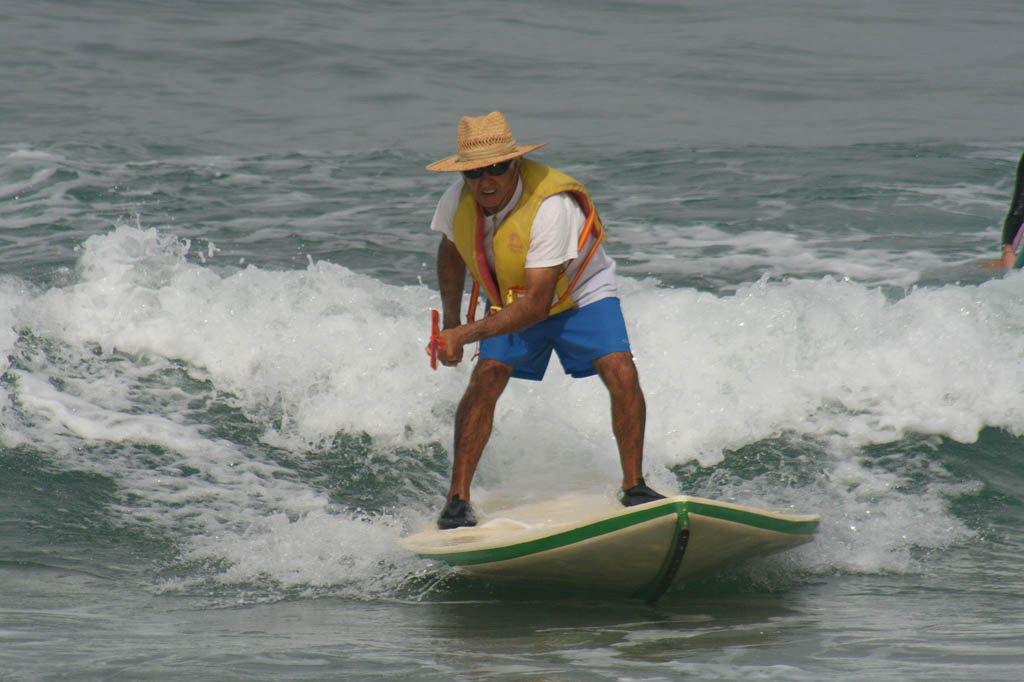 Riding waves on the Hasake involves a combination of surfing and boating. At first, much like stand-up paddle surfing, the rider points the board shoreward and begins the paddle for the wave. But once on the wave, the surfer stands in prone position, with his feet parallel to one another and his shoulders facing the beach. While in that position, the rider tucks one end of the paddle between his rib cage and arm, while the other end protrudes off the back of the board and into the water, functioning much like a rudder. The surfer, then, instead of relying exclusively on his body position and footwork to maneuver the board, relies on these plus the paddle-turned rudder.

The addition of the paddle, however, contributes little to the board’s maneuverability. The 100lbs. pound Hasake, when coming down the line, is much like a train locked on its track, gliding shore onward full steam. The lack of fins adds a further challenge to maneuvering the board. The keel, which is the closest thing to a fin on the Hasake, isn’t deep enough to provide the necessary leverage for sharp turns. A skilful combination of footwork, body position, and dexterity on the rudder can bring about slight changes of direction but nothing like the swift turns of the usual surfboard. But to measure the experience of surfing a Hasake in terms of maneuverability is probably to miss the mark. The thrill of surfing it most likely lies in the sturdiness of the ride, the mixture of surfing and boating, and the act of engaging in a culturally laden equipment.

Reportedly, the Hasake remains quite popular in Tel Aviv, but is scarcely seen in other parts of the world. Along the Israeli coastline, the board is apparently still commonly seen as a lifeguard, fishing, and leisure device. Other places, however, have rarely seen this board. In San Diego, there are allegedly two Hasake’s, one in La Jolla Shores and the other in Mission Bay. Both of these boards, not surprisingly, have been shaped by Israelis, both who found the calm waters of San Diego to be a suitable place to launch the board. But these two men were strongly driven by cultural roots. It’s not clear whether those not so driven will also find the Hasake equally attractive, especially given its cumbersome width and weight. Or further yet, it’s not clear whether surfers will find the Hasake attractive enough to lead them to build one for themselves.

More in this category: The Story Of Standup Paddle Trailer »