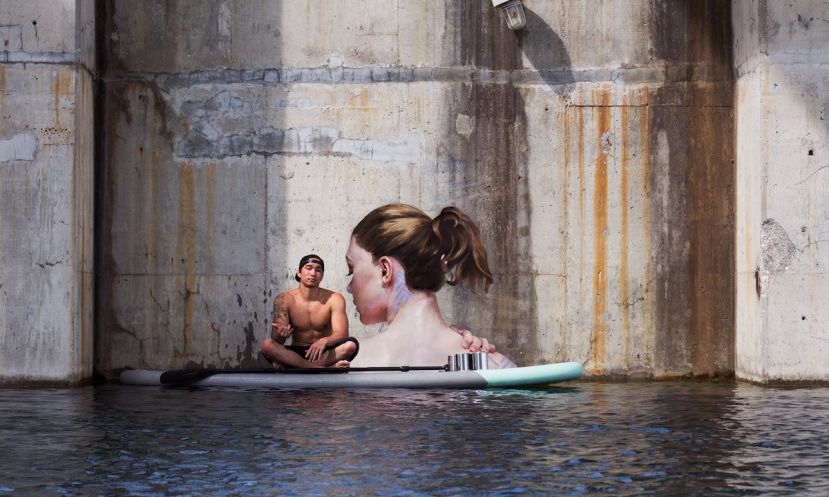 SAN DIEGO, California - You may or may not have seen some particularly breathtaking photos floating around on the web recently of painted murals colliding with the water. These photos went viral and have garnered international attention, and deservedly so. The artist behind these gorgeous murals is Sean Yoro, originally from Oahu, Hawaii. In the creative world Yoro is known by his artist name 'Hula' which is quite fitting, seeing as his art flows as beautifully as Hawaiian dance form.

We had the chance to catch up with Hula amid all of the attention he's recently been engulfed in and asked him a few questions about his art, inspirations and how in the world he was able to pull off his masterpieces atop a paddle board. Here is what he had to say:

Tell us a little bit about yourself and your background in paddle boarding.

I grew up on the Eastside of Oahu, where I spent most my childhood in the ocean. It wasn't till my teenage years that art really grabbed my attention. In college, I stumbled into a portrait drawing class and immediately fell in love. The following summer I decided to leave Hawaii and pursue my dreams in New York City. My family is full of surfers, so naturally I grew up surfing. When paddle boards first hit the scene in Hawaii, I was working at a Surf School in Waikiki. In between classes I would take the new paddle boards out to the line up and have a blast. Really glad I was able to incorporate paddle boards into my process.

I grew up on the Eastside of Oahu, where I spent most my childhood in the ocean. It wasn't till my teenage years that art really grabbed my attention.

Your new work seems to have gone viral! How do you think this happened?

I really have no idea how it went so viral. From article to the next, the scale just kept getting bigger and bigger until I was being covered on CNN, dailymail, and other top international news sources. To sacrifice everything for a dream and see this response has been amazing. I am glad so many people connected with my paintings. 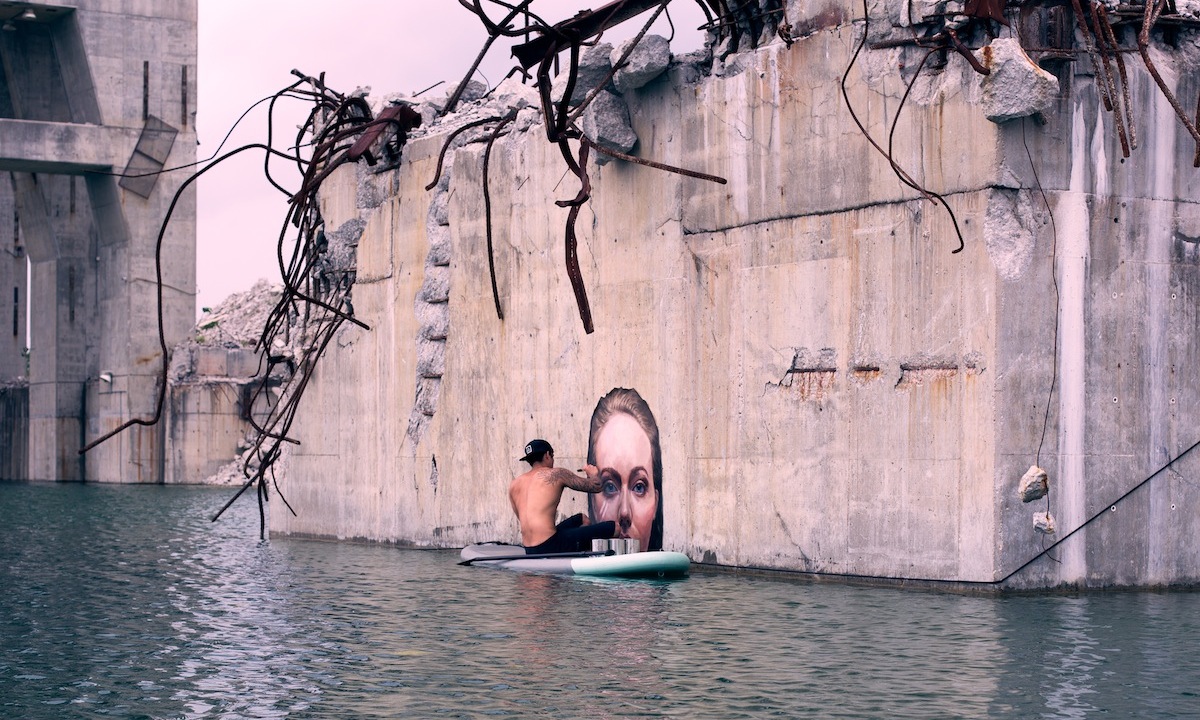 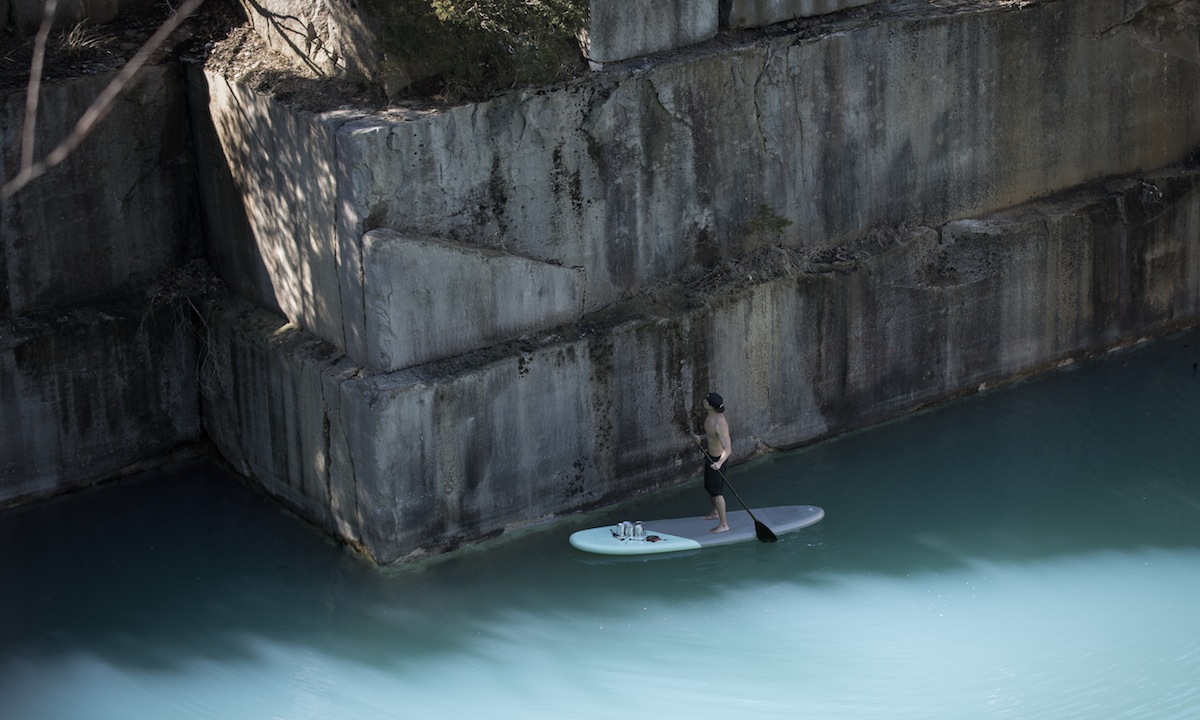 Being from Hawaii, Hula has always had water as an inspiration. | Photos: Aaron Austin

Where are these pieces of art located?

Unfortunately, I can't say the locations of the murals. But I do have more public walls more accessible in the future which I will be able to release locations.

What's the story behind the pieces? Where did the inspiration come from?

The original idea sparked when I was working on a separate project. Since water has always been my main inspiration, I had the idea to paint these portraits of girls underwater. While doing the photo shoots for the paintings, I realized how much I loved to be in the water and still working creatively. From there, I knew I wanted to figure out a way to paint in water. The concept grew slowly but surely, each idea building into a final form for the murals.

The messages I hope to capture with these murals were the connection and relationship I have with my environments. From growing up in Hawaii to moving to New York, I have had to adapt to the radical environment change and these pieces try to capture those emotions.

Since water has always been my main inspiration, I had the idea to paint these portraits of girls underwater.

"The messages I hope to capture with these murals were the connection and relationship I have with my environments." | Photo: Aaron Austin

Why did you decide to work from a paddle board?

Originally, I thought it would be way too small to work on. I was looking into portable docks, the ones people use to clean boats and such. The problem with that was getting them to these locations, so I decided to try it on a paddle board. It was a lot of trial and error, but I finally got it to work. Plus it was much more natural for me as I grew up on a surfboard.

The messages I hope to capture with these murals were the connection and relationship I have with my environments.

Did working from the paddle board make your job as an artist more difficult? (As opposed to working on solid ground or in a studio)

Yes definitely. In the studio, I can control everything from lighting to surfaces, but on the water I have to deal with nature and all its unpredictable variables.

How did the execution of the art happen?

It is a lot of preplanning and researching to make sure things go smoothly on site. I usually set aside 2-3 days to be painting and once done the painting doesn't last too long due to the water and elements breaking it down.

Is what you're doing considered legal? Were permits required?

I have to plead the fifth on this one, sorry! ;)

In the studio, I can control everything from lighting to surfaces, but on the water I have to deal with nature and all its unpredictable variables.

What are you working on now? Do you have more of these pieces planned?

There's almost too much projects in the works right now. Definitely working on a lot more sea murals that will be painted around the world. Really stoked on everything happening, Ill be unveiling the projects as they get closer to completed.