Aksel Kolstead is a SUP enthusiast who has helped to jumpstart the SUP movement in Norway.

OSLO, Norway - Aksel Kolstad is a SUP enthusiast who has helped to jumpstart the SUP movement in Norway. Aksel is an extremely accomplished pianist and composer who had his debut in Carnegie Hall in 2010. A few years ago Aksel was introduced to our wonderful sport of stand up paddling and he hasn't looked back. Since his introduction, Aksel has been working with top brands like Naish and Starboard helping to promote SUP in Norway.

In recent years, Aksel has opened up a concert gallery right on the fjord in Oslo where he performs, puts on exhibits and then afterwords takes his audience on paddle boards, many of which are first timers. We caught up with Aksel to dive deeper and see how he's helped the SUP movement expand in Norway. Our interview is below:

How were you first introduced into SUP?

I first discovered SUP in Cesme (Turkey) three years ago in August 2012. (I have spent most summers in my life in Turkey since I have family from there.) I have always loved water and water sports so I immediately fell in love with SUP.

When I came back to Norway I started working together with Starboard representatives in Norway (sup.no) promoting both SUP and Starboard for them through my active life and career, also through my concert gallery - since it´s basically right on the water. So, since 2012 I have been paddling almost every day possible, all through the year in Oslo. After a while I started to promote Naish and F-one boards through their representatives in Norway (fluid.no (also to this day).

Paddling around in Norway is magical. Huge mountains and incredible fjords! And besides doing lots of concerts at my concert gallery I take my audience out paddling and also rent out boards. Just bought plenty of boards! I have gotten a lot of attention in national press with SUP, which warms my heart - since then, more and more people can experience the beauty of it. For me SUP is strength, meditation, fun and inspiration. All I need in between concerts. And anywhere I go in the world performing, I go stand up paddling afterwords :D 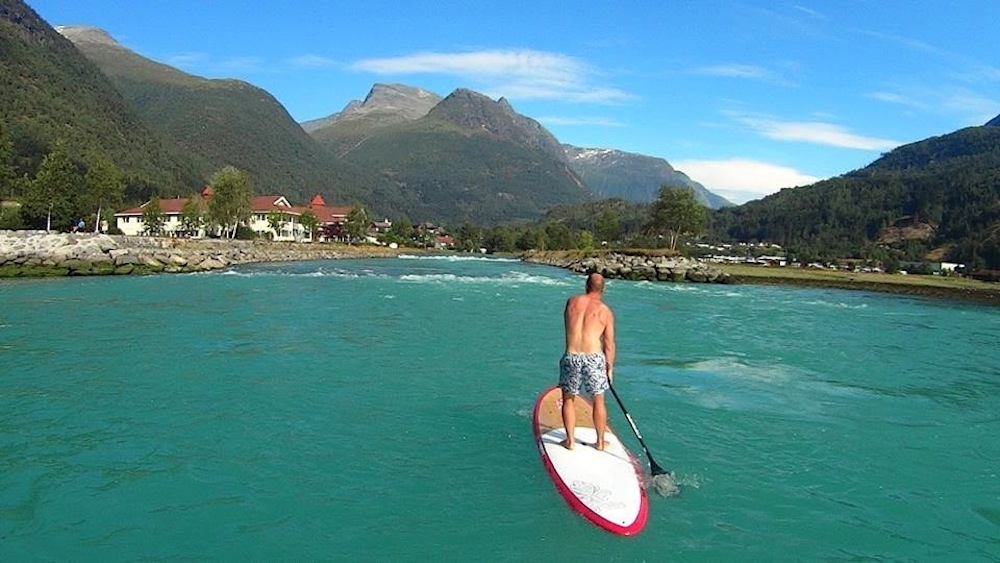 "Paddling around in Norway is magical. Huge mountains and incredible fjords!"

What is the SUP scene in Oslo like? Would you consider it the mecca of SUP for Norway?

It´s magical. Big islands inside the huge fjord. Mountains to see right behind the centre of the city. Along the coast in Oslo there are wonderful small cottages you pass by paddling. And you literally go out from the city center and straight into the fjord. It's amazing.

The west coast of Norway is what is most similar to a fairytale where huge mountains go straight into the Atlantic Sea and the fjords inside the country. Snow and green at the same time.

Tell us about your concert gallery and how it ties into SUP.

I call it SUP urban impressionism. I perform impressionist composers (Debussy, Ravel, etc.) and then take the audience out on the true element of impressionism: water. And we do what Ravel wrote in his music: Jeux d´eau (playing with water) And my gallery is located right on the fjord, 10 meters from the water. So, I just jump on the board from my grand piano.

Where'd you get the idea to take your audience out on SUPs?

Where I get all of my ideas, in my office.

What is the response of your audience after being taken out on the SUP? Are they usually first timers or experienced paddlers?

Usually yes, and then they come back again and again and again. Never have I had anybody falling into the water, and I have had hundreds and hundreds on boards. Maybe because Norwegians were born with skis on their feet when they were born, as we say in Norway.

I also had a parade on SUP right outside my gallery on our National day on May 17th (I do that every year).

Audience members are treated to a paddle after Aksel performs.

Where do you see your business going in the future?

Pretty good, I actually opened Café de Concert in NYC last year, was a big hit - but due to water flooding inside the space I had to close down for a while. But the gallery in Oslo is used to water so that one will last ;)

Will be playing much in Asia this fall as a soloist also. Who knows maybe I´ll be doing a SUP concert for SUPconnect in 2016? :)