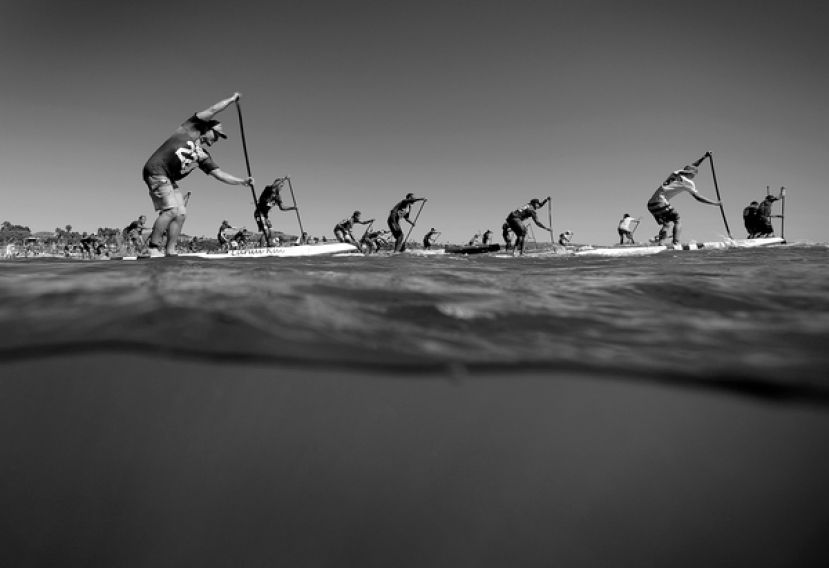 This week Supconnect was fortunate to catch up with Donald Miralle: a husband, father, surfer, paddler and one of the most respected sports/travel/lifestyle photographers in the business.

This week Supconnect was fortunate to catch up with Donald Miralle: a husband, father, surfer, paddler and one of the most respected sports/travel/lifestyle photographers in the business. With over forty international awards to his name a client base that includes National Geographic, the NFL, Sports Illustrated, UFC and several others, his craft has taken him around the world, to some of the biggest events in sport.

Supconnect : When did you get into photography and what’s your favorite aspect of the craft?

Donald Miralle: I grew up really loving two contrasting things, sport and art. As far back I can remember, which was probably somewhere between the ages of 3 and 4, art was always effortless and enjoyable to me. But art took a backseat to sports when I was about 10 years old, when a little show called the Summer Olympics rolled through LA. It made a big impression on me and I can vividly recall the spectacle and pageantry of the Games, going to gymnastics, boxing, and other venues and feeling such excitement waving the American flag and watching real super heroes in action. It was the beginning of my love affair with sports and the Olympics.

My parents thought it was really important for us to get involved in sports, so they enrolled my sisters and I in club teams for soccer and swimming when we were 6 years old and I ended up swimming all the way through college. It wasn’t until my junior year while I was at UCLA, after the swimming team was cut because of Title IX, that was drawn back into my passion with art. Later that winter I was accepted into the UCLA Art School, and switched from a Bio major to Fine Art. Soon thereafter, I took my first photography class and something literally clicked. 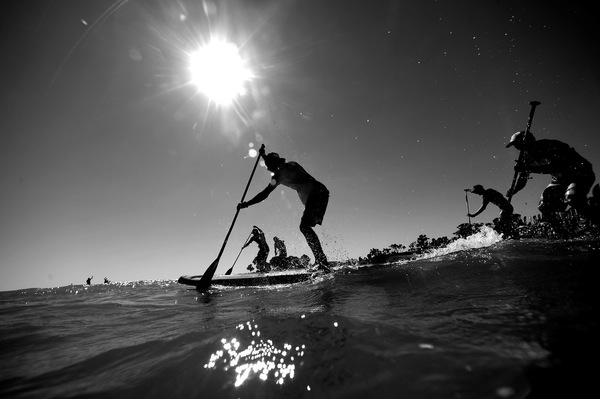 Another shot from the 2013 BOP

Supconnect: What do you use to shoot in the water, both in terms of housings and cameras? How do you hone your craft as a water photographer?

Donald Miralle: When I’m in the water I usually am equipped with Nikon D4 and 14mm lens in an Aquatech Housing. I usually have two GoPro H3’s mounted on top shooting video and stills simultaneously, and occasionally use Ikelite strobes if I need a secondary light source other than sunlight. If the shoot calls for it, I will use full scuba gear as well. You hone your craft as a water photographer just as you would surfing or paddling, by spending quality time in the water. The amazing thing about shooting in the water, whether it be big waves in Hawaii or at the Olympic Games, is being underwater is a completely different world of it’s own. Everytime I photograph water it makes slightly different shapes and is never the same twice, so you’re always creating something new. It never gets old or loses its novelty, and that’s what keeps me coming back into the water with my camera.

Supconnect: How does your background as both a waterman (swimmer), a paddler and surfer influence your craft? Do you find yourself taking imaginary pictures when paddling, visualizing how certain angles would look on film - do you ever turn your working brain off? 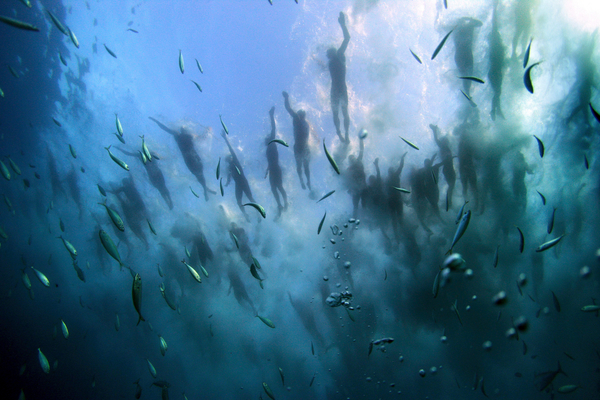 Donald Miralle: Being comfortable in the element definitely is an advantage when shooting in the water, and sometimes I feel more comfortable in the water more than I do on land.  All those years in the water, training in it and respecting its power, gave me a head start when I decided to jump in with a camera. But even when I’m out in the ocean without a camera and see a magic moment like a pod of dolphins or a sunrise on a wave, I tend to frame it with my eyes like I would if I had a camera but I appreciate it more when it passes without a photo and it’s gone forever. A couple years ago when I was competing in the Catalina Classic Paddleboard race, a 50-foot blue whale submerged under my board and came up for air right in front of me. It was an amazing and almost a religious out-of-body experience, with this massive creature gently swimming around me on mile 24 of 32. I immediately forgot how much my body was hurting and luckily my boat captain took a great picture of it with his cell phone camera!

Donald Miralle: In your opinion, how much luck is involved in being a good photographer versus being able to work with the elements and turn scenes into art?

Donald Miralle: It’s better to be lucky than to be good, so the adage goes. And with photography it’s no different but it helps to be good at your craft and have good fortune. The idea is to master it so your camera is always prepared for the moment with the settings (aperture, shutter, ISO) as well as the composition and lens choice. So the camera is in essence just an extension of your mind’s eye and how you see the world, then it’s just a matter of predicting where things will happen and hopefully those elements line up sooner than later, and having the timing and reflexes to capture it at its peak. You definitely make your own luck with photography, and it is a waiting game. Personally I tend to find graphic or compelling scenes, and let the subject pass through it, so these rules definitely apply to how I approach the medium.

Supconnect: What goes on during your average work day? 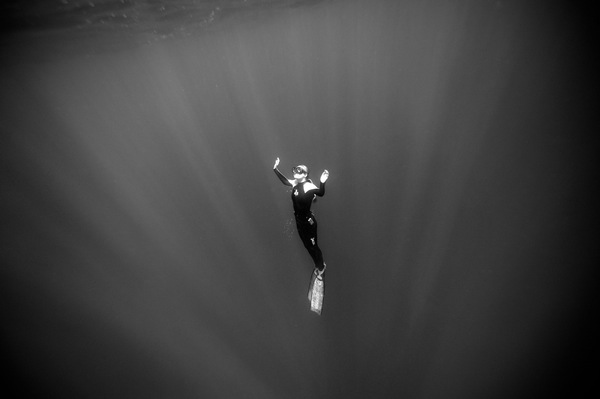 Donald Miralle: Tomorrow I wake up at 5:30am PST and will go for a quick swim or paddle in Encinitas, hang out with the kids before they go to school, and then head to the airport for a flight to Denver. I will travel with my 1st assistant and 5-6 gear cases, grab a rental car in the Denver, drive 3.5 hours to Aspen, check into hotel, meet my second assistant who has another 3-4 cases of lighting gear, scout the location, and finally prelight for the next day. If we’re lucky we finish up before 10pm and can catch dinner and drinks before hitting the sack at midnight. The following morning we will wake up at dawn, get a good breakfast and cup of coffee, meet up with the Art Director/hair/makeup/wardrobe folks to make sure we’re all on the same page, finish-up the lighting setup, shoot the talent for several hours, break down and pack up gear, and head back to the airport to get back to San Diego to hopefully get back to tuck the kids in bed. The days are always long and sometimes the shoots are a commercial for one day with a couple hours of flying, or sometimes the assignment is a month documenting something on the other side of the globe. Either way it still better than sitting in an office, but you just have to learn how to juggle all the moving pieces, and find the right balance with family and work.

Supconnect: What elements are you looking for when it comes to shooting SUP riders and lifestyle scenes?

Donald Miralle: In general, whether I’m shooting a SUP athlete, an NFL player, or a celebrity, I am looking for an environmental portrait that bring out the character of that person and the beauty in what they do or who they are. Sometimes the backdrop is an amazing natural scene or sometimes I am working with a backdrop in a hotel conference room, but either way I try to paint the subject with light and capture the essence of my subject. I believe the legendary Arnold Newman still remains the best at the “environmental portraits”, and the show I had with him and Brent Stirton in New York about 10 years ago is still one of the highlights in my career.

Supconnect: Do you have a favorite destination, athlete, time of day or subject to shoot?

Donald Miralle: It’s hard to beat Hawaii in the morning with a building swell.

Supconnect: Do you have an all-time favorite shot that stands out as your greatest accomplishment as a photographer?

Donald Miralle: In my field, there are critics and people who make their entire careers off judging other people’s photography or art, and placing them up on pedestals or slamming them down to the ground. Photographers end up like flavors of the month, getting really popular for a bit and then disappearing into ambiguity. Photography is not only a form of art, as it literally is it’s Greek definition of “painting with light”, but it is also one of the highest and most complex forms of communication our culture has. A photo can tell a thousand words, has no language barriers and can really change the world. From conflict photographers shooting in the line of fire to show the horrible atrocities of man, to National Geographic Photographers documenting environmental issues and nature, to sports photographers freezing athlete’s moments in time, all photographers are trying to show the world relevant subject matter, and their perception and connection to it. 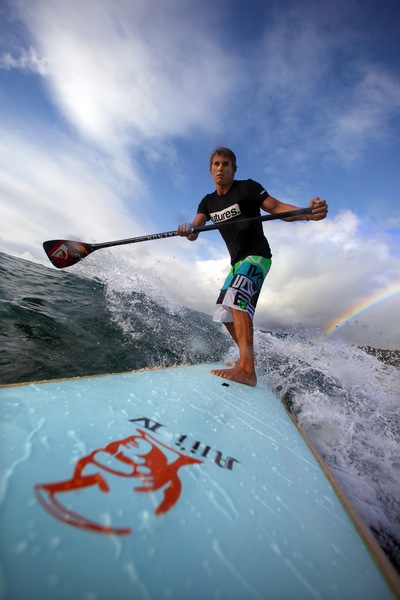 With that said, it’s hard to place your finger on one photo that stands as the most important, in your career, as you are only as good as your last photo, and it’s all subjective to who looking at your photos. But in photography the pinnacle achievement is the Pulitzer Prize and the World Press Photo Awards. I don’t shoot conflict or any heavy subject matter so I’ve never won the Pulitzer and probably never will, but I have been fortunate to have been awarded World Press Photo four times for my sports photography. One of the photos that took a first place was my underwater start image of the Ironman Triathlon World Championships, and is probably my most famous shot if there was one I had to pick.

Supconnect: Do you have any exciting projects coming up?

Donald Miralle: I am heading to Aspen, Colorado tomorrow to finish up the last part of a commercial campaign I’ve been shooting all year of Olympic Athletes going to Sochi next year. It’s been a great project, had the opportunity to meet and work one-on-one with a lot of great athletes, like Lindsey Vonn, and am looking forward to seeing the final ad in print. It will be a good warm-up for Russia next February, which will be my eighth Olympics Games that I’ve covered.

Donald Miralle: What was shooting at the Battle of the Paddle like? Do you have a favorite moment or image from the day that stands out?

Shooting the Battle of the Paddle was awesome. Not only because I love the sport, race, know and train with a lot of the athletes, but shooting the elite race is like controlled chaos. It’s like Nascar racing on the water, sometimes four wide going into a turn, lots of lead changes, and carnage. It made for some really dynamic images full of color and action, and I was able to cover from the water and from land, which made it even more interesting. I competed in the first BOP several years ago, and this was my first time back and it’s amazing how much the event has grown, and how far the sport has come, with both the gear and the athletes. I’m looking forward to 2014 and think I may have to put down the cameras and pick up the paddle to join more of the action next year!