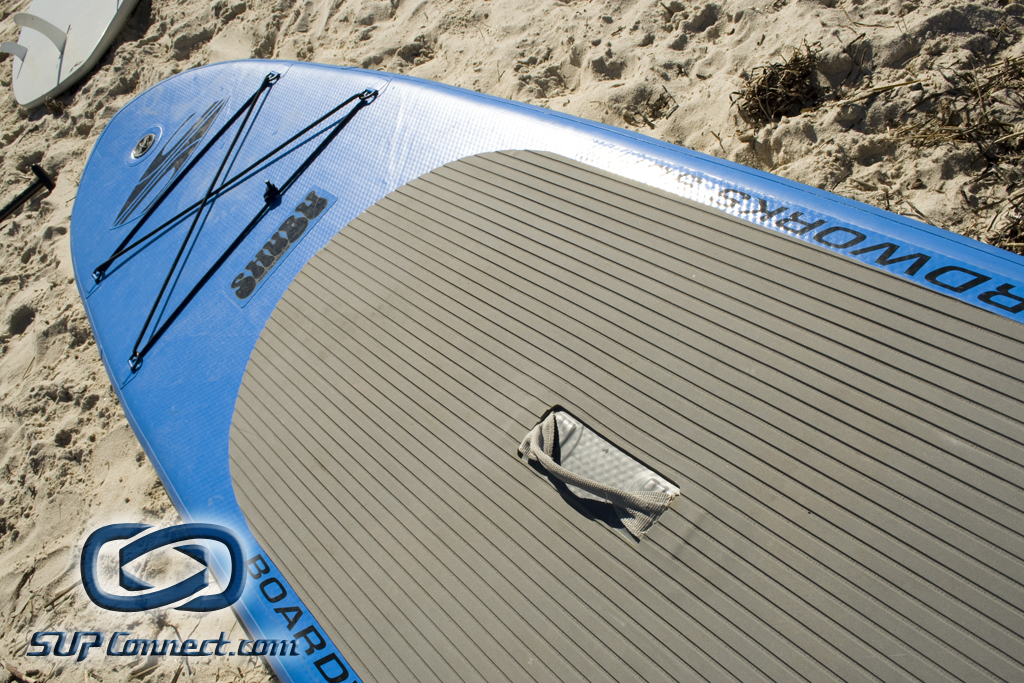 Inflatable Stand Up Paddle Board by Boardworks SUP comes in two sizes, the 10' and the 10'7", both with handles, pump, and bag.

Boardworks Surf announces the SHUBU line of inflatable stand up paddleboards. Get ready to travel! The portable SHUBU SUP now allows you to take your SUP on the road, trail, plane, train, and so on. The Shubu SUP changes the game when it comes to deciding what to take with you when space is in question. Made of durable military grade, UV resistant rubber, featuring a proven drop stitch construction, these boards can take just about anything you can throw at them. Excellent for recreational surfing, touring, running rivers, these boards are extremely versatile. Available in 4 color options featuring a separate deck, rail, and bottom color. Each board comes equipped with a glued on rubber tri fin keel set. This setup allows for exceptional maneuverability and is great for getting into those shallow areas. Also included are the backpack, the pump and a variety of valves, an inline pressure gauge, and a color matched rubber patch kit. The Shubu also comes equipped with 4 forward deck D-rings and a bungy system for strapping down whatever you might need for that adventure of a lifetime.

Other.1: Pump & Whose Included

Other.2: Carrying Bag for Board and Accessories

Be ready to be blown away – pardon the pun. I've used this board on two occasions and was completely impressed both times. First paddling on a lake and later on a river, the ease with which I inflated it, the stiffness of the inflated board, and the performance on shallows surpassed all my expectations for a blow up board.

For travels and shallows, the Shubu is hard to beat. Fold it up, throw it in the carrying bag that comes with it, and you're ready to sup the world! I hopped on a plane to Conroe, Texas and had absolutely no problems checking it in and getting it to my final destination. Then, when I was about ready to hit Lake Conroe, I thought inflating it would be a nightmare. Wrong. In a matter of minutes, using the pump that comes in the bag with the board, the Shubu was fully inflated and stiff beyond belief. I took it on the Lake, went for a ten mile paddle, and had a blast!, especially after I found out that the Lake has alligators and none of them took a bite of my board. A few months later was river time! Enter Truckee River off Lake Tahoe. It was later in the summer and there were lots of shallows. But no problem here. We took off the center fin and easily bounced off all the shallows without cracking any fin box or dinging the bottom or rails. Simply put: a phenomenal travel equipment for multiple stand up paddling conditions.

Three things, but all of which seem to have been corrected. First, when I traveled to Conroe, Texas, the board was in a very simple and fragile duffle bag. That, however, has changed. Now, the Shubu comes with a very well designed and strong bag, making it incredibly easy to be carried around. Second, there was no three piece travel paddle to fit in the bag. But that, too, has changed. Now Boardworks offers just that, a three-piece paddle that fits in the bag and which can be easily assembled. And lastly, there was no single fin box when I first tried it. But the current model now comes with a large fin that can be easily placed into the fin box, making life much easier on those looking for longer paddles since the longer fin helps to reduce the yaw.

Disclaimer: Andre Niemeyer's notes are typically taken from a one-time use and assessment. Several features were gauged, ranging from design and construction to pricepoint and usability. Now some of these features, such as durability, may receive an initial assessment based on the construction materials and foil, among other things. But this is not a final and definitive assessment. For some features, durability included, any final and definitive assessment requires a longitudinal study. No such study has been made for Andre Niemeyer's notes. These notes are initial, not final, assessment reports.