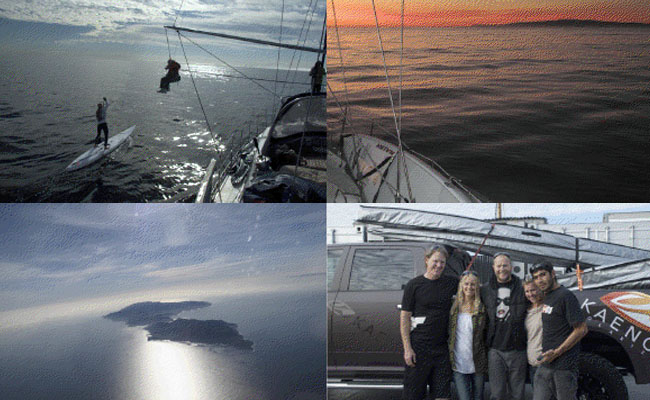 Images from the Channel Islands and in the lower corner from left, John Wrenn, Karen Wrenn, and Chris Wymans.

Wrenn, a 39-year-old mother of three from Portland, Ore., fought strong winds, waves and physical exhaustion, becoming the first person in history to travel between all islands consecutively by any man-powered craft. More than a physical accomplishment, Wrenn had to overcome mental barriers in order to complete the challenge.

“When I was paddling the long distances for hours all by myself, it became very mental,” Wrenn said. “I had to start off each day knowing I would make it and that no matter the conditions, I could do it. I simply had no other choice.” (Join the Destination Group.)

Racing against impending weather, the 5-man crew tackled the southern-most islands of Catalina, San Clemente, Santa Barbara and San Nicolas in the first days of the trip. During her crossings, Karen was accompanied by seals, dolphins, whales and even a large shark, (assumed to be a great white by the boat crew) during the final miles between Catalina and San Nicolas islands.

Karen powered through three crossings in the northern-most islands on the fourth day and made her final 43-mile paddle between Anacapa and Santa Barbara islands on the sixth day. Racing against headwinds and approaching darkness, Karen finished the final leg, an 11 hour, 22 minute paddle, as the sun set. (Stay in the Loop with the Newsletter.)

“Karen has an incredible strength inside,” said John Wrenn, Karen’s husband and member of the crew. “It's an amazing thing to experience her determination. On the last day, when we gave her the news she had only three hours of daylight left to finish the 43-mile leg, it became a race against the sun. I watched her take it up another gear after eight hours of paddling.”

After six days on the water, Karen solidified her place as the first to accomplish such a crossing among the Channel Islands.

“I am proud of myself and the way everything happened,” Wrenn said. “There isn't anything I would change about the experience. Even the last day, having to paddle with headwinds for 11 hours and 22 minutes, I wouldn't change. I like the challenge; it's what makes me who I am.” (Become friends with Karen Wrenn.)

Wrenn is a champion stand up paddle boarder, endurance athlete, a mother and wife. Her stand up paddle titles span across the globe, including wins not only in mainland US but also Europe and abroad. She currently lives in the Northwest and is a familiar face in stand up paddle race circles.