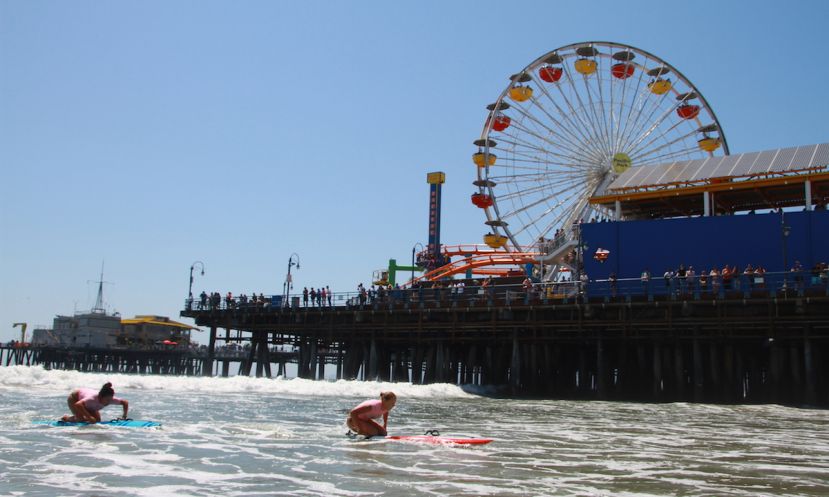 Candice Appleby comes back every year to compete at this event. | Photo Via: Andrew Rice

SANTA MONICA, California - The world famous Santa Monica Pier and Ocean Festival Sponsor Tommy Bahama, the popular beach lifestyle brand, announced today that surf guitar legend Dick Dale will headline the main stage at the always popular Paddleboard Races and Ocean Festival. Now in its 7th year, the event has exploded in size and popularity along with the growth of the sport of stand-up paddling. Last year’s festival was attended by hundreds of competitors as well as thousands of spectators who lined the pier rails to cheer the racers on.

Event title sponsor Tommy Bahama has supported the Ocean Festival for the last three years as it has transformed into one of the top events of its kind. This year the popular lifestyle brand will host a Tommy Bahama Ice Cream Truck and Pier Lounge with free ice cream and backyard games to play. They will also be part of the “Mai Tai and Beer Garden” with a rum lounge serving their signature Tommy Bahama Mai Tais, which are always a fan favorite.

“Tommy Bahama has always felt a special kinship with this event. We’ve been right at home at the Santa Monica Pier since our very first year,” said Rob Goldberg, Tommy Bahama EVP of Marketing, “This event represents everything we are about: a great community, an iconic landmark like the pier, fun on the sand, and world-class competition in the water. We know that the $15,000 cash prize purse makes this event one of the pre-eminent paddle competitions in the world and we hope that will bring even more of the sport’s top competitors to the starting line.”

“The Paddleboard Race & Ocean Festival has grown into a celebration of everything to do with the Southern California ocean lifestyle,” said Craig Hoffman, Director of Partnership & Development for the Santa Monica Pier. “To celebrate that we decided to bring in a musical guest who also embodies the same things for a free show during the festival. Dick Dale is a living legend. He is legitimately called ‘the King of Surf Guitar.’ We think he’s the perfect musician to take our event to the next level. We hope that people will come to enjoy the ocean races and festival and stay to enjoy this epic show.”

Dick Dale was a surfer in the 1950s and began playing “surf guitar” then, but his fame and influence came into full-force in the early 1960s as he was one of the first musicians to use reverb and fast, shredding guitar scales, foreshadowing things to come decades later. He was also famous for playing with his amps much louder than customary for the time. He is the only person to be inducted into both the Musicians Hall of Fame in Nashville and the Surfer’s Walk of Fame in Huntington Beach. He still tours regularly and his stage performance are famous for their high energy and enthusiasm.

The 2015 Paddleboard Race & Ocean Festival saw a number of incredible athletic performances as paddlers, swimmers and lifeguard dory racers fought it out in their respective events last year. The 2016 event will see a minimum of $15,000 in cash prizes awarded to finishers plus numerous special awards of other prizes. This is the second year to include beach volleyball as an event.

The all-day ocean festival takes place Saturday, June 11th, 2016 beginning at 8 AM on the beach south of the Santa Monica Pier. One of the most exciting and anticipated events every year is the Tommy Bahama Paddlecross, a short-course sprint race out and back through the surf. In addition, several new competitions are being considered and developed, including SUPsquatch, where teams of 5 or 6 paddlers team up to paddle a single huge inflatable stand up board through waves and around a multi-buoy course. There will also be a beach volleyball tournament, lifeguard dory races, and an enhanced youth division for all paddle races.

The event benefits The Bay Foundation, which works with partners to create and put into action innovative projects & policies for Santa Monica Bay that clean up our waterways, create green spaces in urban areas, and restore natural habitats both on land and under water. The Bay Foundation will receive a portion of the net proceeds from the event.

On the pier deck, the historic and popular waterman’s museum returns, celebrating the long history of paddle boarding at the Pier since the 1940s and features antique surfboards, paddle boards, lifeguard equipment and vintage automobiles. Live music and an awards ceremony will follow the completion of the races for the top finishers in each of the divisions. Industry brand manufacturers will show off the latest in paddleb oards and equipment. For more information, visit www.pierpaddle.com.