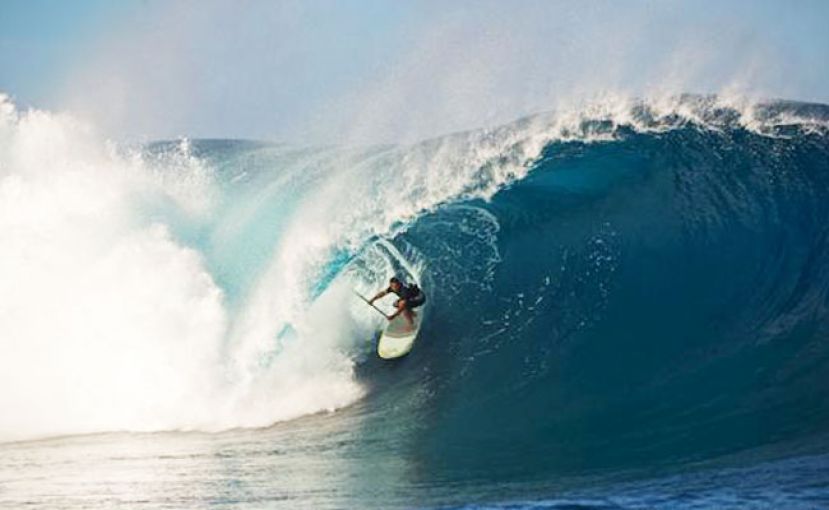 Cranking swell in a previous World Tour Stop in Tahiti.

Since the World Tour's first visit to Tahiti in 2009 for the Stand Up World Tour Contenders, Tahiti has become firmly entrenched at the heart of the Stand Up World Tour with some of the most groundbreaking action ever witnessed in the sport. From the 26th May to the 3rd June, the Sapinus Pro presented by Air Tahiti Nui will once again make history as one of the premier stops on Tour, with the best athletes from all over the world congregating on its shores to do battle for this 3rd spectacular edition.

Rogue SUP becomes a proud partner of the Sapinus Pro

Rogue SUP has become a proud partner of the 2012 Sapinus Pro: with its Polynesian strong team, from the Hawaiians Aaron and Riggs Napoleon, Kainoa Hauanio and Ikaika Kalama to their figurehead here in Tahiti, Arsene Harehoe, star of the 2012 poster, the Rogue team promises to excel in the powerful reefbreak of Sapinus. Stay tuned for regular updates from the team throughout the event and watch out for the action as it unfolds here at stop 3 of the 2012 Stand Up World Tour.

In 2009 the Stand Up World Tour Contenders set the tone

In 2009 a handful of Hawaiians, Tahitians, a couple of Australians and an American descended upon Teahupo'o, Tahiti aboard two Moorings charter boats to pave the way for the launch of a World Championship Tour for a flourishing new sport of Stand Up Paddling. In 10 days, history was made, as some of the sport's leading characters tackled spectacular surf at this notorious break, redefining what the sport is all about and providing a signal of what was to come for the Stand Up World Tour.

In 2010, Sapinus became the host and history was made

In 2010, the first official stop of the 2010 Stand Up World Tour got underway at the Pointe des Pecheurs and the relatively unknown spot of Sapinus as the conditions turned on and history was made in some of the most spectacular waves ever ridden in the sport. There were phenomenal performances across the board, with the win going to the powerhouse from downunder, Dave Muir (Starboard), who showed the world how to turn in big surf, navigating his way through the unpredictable surf at Sapinus to take the well deserved win. Here Duane DeSoto scores the most memorable barrel of the event....

In 2011 the Sapinus Pro delivered even more action

In 2011, the Sapinus Pro presented by Air Tahiti Nui once again set the standard for performance Stand Up Paddling in some of the most dramatic conditions imaginable. After a disappointing finish in 2010, 2x World Champion Kai Lenny (Naish) stepped up in round 1 heat 1 of the main event with a jaw dropping barrel to make his intentions known right off the bat. In the end however, it was to be Peyo Lizarazu's day, as he secured a long awaited win here at the Sapinus Pro presented by Air Tahiti Nui.

In 2012, the experienced, the title contenders and the new faces all meet for a showdown that will go down in history

In 2012, things are building for what will be without doubt the most intense showdown yet, as Tour regulars, newcomers and the strong local Tahitian contingent set up to do battle once again at La Pointe des Pecheurs for the next chapter of this incredible event. With a great forecast in place for the week, the action promises to be impressive, as athletes battle not only for the event win, but for vital ranking points in the overall standings on the Stand Up World Tour, as the top 6 are seperated by as little as 0.3 and 2 points at the most. The Top spot is currently shared by the Current World Champion Kai Lenny (Naish) and the new phenom from Brazil, Caio Vaz (Art in Surf), looking to once again make his presence felt here at the Tahitian leg of the Stand Up World Tour. Here local Tahitian athlete Didier Tinhin puts it all on the line to secure his 4th place finish in the 2011 edition. Didier is certainly one of the standouts here in Tahiti, but he is far from alone, with the wealth of talent, both young and older proving a real threat to the visiting athletes looking for victory here at Sapinus.

The Sapinus Pro is upon us: it all starts here tomorrow

The time has come for Tahiti to once again put itself on the map and it all starts here today at the Manava Suite Resort in Punaauia with the press conference, featuring a selection of the world's and Tahiti's press providing insight into what we can expect this week and how they are feeling coming into this event. The Pink Coconut will then host an elaborate Opening Ceremony in Marina Taina tomorrow evening from 6pm, to welcome athletes from all over the world and to enjoy this beautiful waterfront location. Sunday, we will return to La Pointe des Pecheurs for the Na Kama Kai Kids clinic, supported locally here by the Association Papa Hoe and Air Tahiti Nui's cultural representative and World Tour athlete, Patuariitea Laux (Patu). Monday will then be the kick off for the Trials, bright and early, with good waves expected through Thursday, providing an ideal window for the successful completion of this iconic event. Stay tuned to www.sapinuspro.com for the latest news, updates, highlight videos and more as well as the Stand Up World Tour Facebook

Stay tuned as well for the GoPro highlights from Sapinus

As with any barreling waves in Tahiti, there is no better angle than in the barrel itself. Stay tuned for GoPro highlights from the event featuring ambassador Zane Schweitzer (Starboard) and others, as they take on Sapinus in all its glory, providing some of the most insightful shots of what it feels like to take on this powerful wave deep in the South Pacific. Watch out for these GoPro highlights to be found at www.sapinuspro.com / www.standupworldtour.com over the coming days.