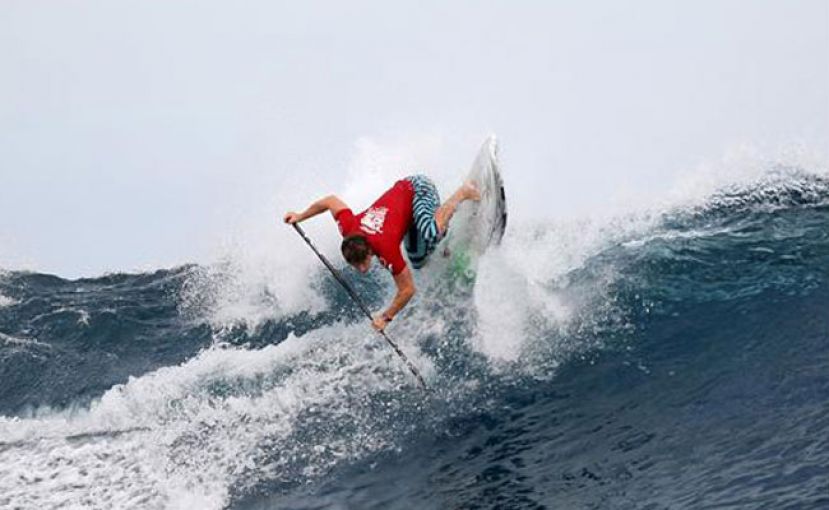 Sean Poynter storms to victory at the 2012 Sapinus Pro

Sean Poynter (Starboard) from the USA stormed to victory yesterday here at the Sapinus Pro presented by Air Tahiti Nui to secure his first win on Tour and place him comfortably on top of the world after round 3 of the 2012 Stand Up World Tour. From the outset, Poynter put on an impressive backhand attack at Sapinus, linking radical snaps and tail drift turns into roundhouse cutbacks worthy of a Champion here on the Stand Up World Tour, winning every heat on his way to the Finals. In the Finals itself, despite the challenging conditions that were significantly affected by the wind, Poynter dug deep to dominate the 4 man final and take the win to overtake 2x World Champion Kai Lenny and secure the ratings lead.

The new generation come into their own at Sapinus

While the legends of the sport here in Tahiti such as Arsene Harehoe (Rogue) and Vetea 'Poto' David (Naish) are still very much the leading lights, a wealth of new young talent is emerging here in Tahiti, and in particular, a young athlete by the name of Poenaiki Raioha (Naish). At just 15 years old, Poenaiki demonstrated that his wildcard award was not only merited, but essential, as he stormed through the rounds to reach the final and finish in an incredible 2nd place behind the Champion, Sean Poynter (Starboard). As the sport and the Tour progresses, not only does Tahiti remain at the heart of the Stand Up World Tour, but its athletes presence on Tour only grows stronger, from Arsene Harehoe's continued strong showing on Tour (currently lying in 6th place overall) to this new wave of talent that is highlighted here by Poenaiki's performance, but runs a great deal deeper to include many U16 phenoms.

Justin Holland (Starboard), having just signed to Starboard and with a quiver of new boards had an incredible run here at the Sapinus Pro presented by Air Tahiti Nui, winning all his heats on his way to the Final and showcasing that he is truly a name to watch out for here on the Stand Up World Tour. His no holes barred approach to surfing impressed the judges and crowds alike, and allows him to improve on his current overall ranking. There is no doubt that we will be seeing a great deal more from this colorful character from down under here on the Stand Up World Tour.

Robin Johnston, one of the most on form surfers in event

Robin Johnston (Mistral) found his form here in Tahiti to put on an impressive display of fluid, yet radical surfing at Sapinus that impressed the judges throughout the day, connecting big turns in the unpredictable surf to secure his well deserved berth in the Final. His 4th place here in Tahiti moves him up the rankings to right behind 2x World Champion Kai Lenny (Naish), and puts him thoroughly in contention for the Title in 2012. As the sole representative for Hawaii in the Final, Robin flies the flag impeccably with an incredible performance throughout the event.

Arsene Harehoe continues his great run on Tour in 2012

Living legend Arsene Harehoe (Rogue) continues his incredible form here in Tahiti finishing in 7th place and moving him up to 6th place overall in the 2012 World Rankings. While the conditions in the semis were not ideal for Arsene to show what he has got and achieve his goal of a win at home in Punaauia, he represented Tahiti impressively as always and continues to serve as a shining light for Tahiti's future generation of Champions. Long may Arsene continue to honor the Stand Up World Tour with his presence.

As anticipated, Vetea 'Poto' David (Naish) put on a stellar performance here at Sapinus, showing that he is still every bit the Champion he was in his ASP shortboard days and continues to make his presence felt here on the Stand Up World Tour. After some impressive surfing from start to finish, Vetea narrowly missed out on a finals berth (by 0.3), finishing in a very worthy 5th place. Another great result for the Tahitian contingent that saw 4 athletes in the semi finals.

Despite putting on a display of great surfing, Peyo Lizarazu gets edged out in one of the toughest quarterfinal heats of the day, having to settle for 13th place here at Sapinus. There is no doubt though that Peyo is always a force to be reckoned with, and as he showed last year at Sapinus and every year at the Sunset Beach Pro, when the conditions turn on, he steps up and stands out.

Kai Lenny goes out in the quarterfinals here at Sapinus

Despite putting on a phenomenal performance throughout the day, Kai Lenny (Naish) fails to find the right waves and makes some uncharacteristic mistakes leading to him being edged out in the quarterfinals here in Tahiti. Like in France, Kai had to settle with another 9th place, opening himself up to the Contenders that are right on his heels and allowing Sean Poynter to pass by and take the lead. However, knowing Kai, is knowing that this will only make his will and drive stronger and you can be sure he will be back in Brazil and ready to make up for a couple of disappointing finishes here on the 2012 Stand Up World Tour.

Aaron Napoleon puts on a dramatic display as always

Aaron Napoleon (Rogue) puts on a dramatic display of surfing as always, but just misses out on advancing through to the quarterfinals, having to settle for a 17th place at this year's Sapinus Pro presented by Air Tahiti Nui. However, Rogue rider Aaron will be back and never fails to disappoint, searching for barrels at every opportunity and wowing the judges and crowds alike with his surfing prowess.

Fellow Hawaiian and Rogue rider Ikaika Kalama (Rogue) stands strong here in Tahiti, securing some of the highest scores on day one of the Main event and putting on an impressive performance thoughout the rounds, only to get edged out in the Quarterfinals. Following his finals in Sunset, Ikaika now moves up to 13th place overall in the 2012 World Rankings.

There was a strong Brazilian contingent this year at the Sapinus Pro presented by Air Tahiti Nui, led by leading light Leco Salazar, but also the new young Champion Caio Vaz (Art in Surf) who was on top of the world coming into this event, tied with Kai Lenny for the ratings lead. It was a family affair as Leco was joined by father Alex Salazar, who narrowly missed out on a berth in the quarterfinals, while Caio was joined by brother Ian Vaz (Art in Surf), both finishing in 17th place. It was to be Leco who advanced the furthest, finishing in a worthy 9th place and keeping him very much in contention for a world Title in 2012, as he sits in 4th place currently on the world rankings, with the young Caio Vaz in 5th.

The level here on the Stand Up World Tour rises again

The level on the Stand Up World Tour sees another boost here in Tahiti, as athletes once again step up and showcase just how far the sport has come and provide an inkling of just how far it can go. As we are now midway on the 2012 Stand Up World Tour, the Title Race is setting up to be the most exciting and dramatic yet, as the Top 5 are all very much in contention, and while Antoine Delpero from France has slipped down following his absence here, with the discard after event #4, he will no doubt climb right back up into contention. Here are the updated rankings following Stop 3 of the 2012 Stand Up World Tour, the Sapinus Pro, presented by Air Tahiti Nui:

Stay tuned to www.standupworldtour.com for the latest news, highlights and GoPro Specials featuring up close action of the Worl;d's best battling it out for the World Title. Next up is Brazil, as athletes will once again do battle down in South America for the coveted and prestigious World Title. More to follow at www.standupworldtour.com Aloha from everyone at the Waterman League and a big Mahalo to all our partners in Tahiti: Air Tahiti Nui, the Moorings, Rogue SUP, Tahiti Tourism, the region of Punaauia, OPT, the Manava Suites Resort, Yamaha jetskis, the Pink Coconut in Marina Taina and of course our on the ground partners: Association Papa Hoe, the Tahitian Surfing Federation and the Sapinus Boys. Maururu and we will see you all next year!