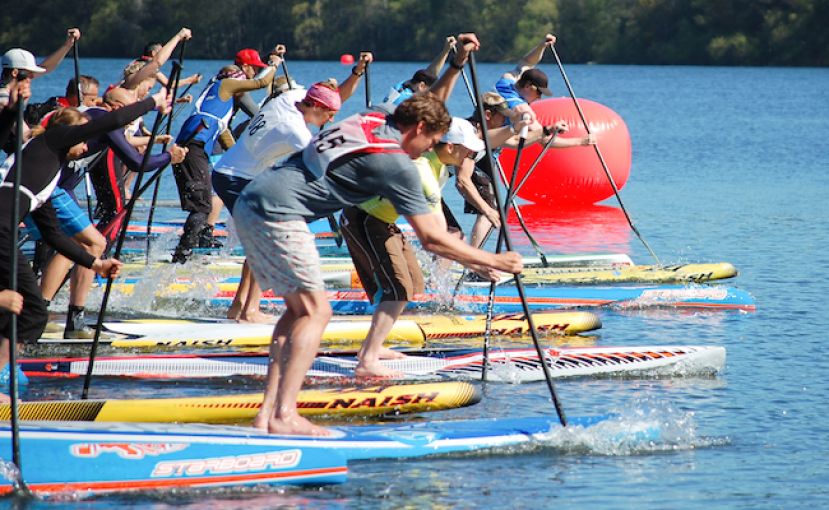 Image: Johan Furestad | Magnificent line-up for the first SUP-race 2014 in Sweden . Saturday the 17th of May, 2014 was an awesome kick-off day for the racing season after a few months with ice and snow.

SAN DIEGO, California - The Stand Up Paddle Athletes Association is calling for feedback on their latest press-release, regarding the standardization of SUP race distances.

"One of the goals for SUPAA is to help standardize and unify SUP racing. Unified SUP race distances is one area we are working to standardize for our sport. Read the article and please let us know what you think!"

Running and stand up paddle boarding have a lot in common. The similarities start when you leave behind the fact that one is done on terra firma and the other on water. Both sports can be considered the most accessible sports in their respective environments, their ease of participation is simple yet can still create a challenge, both require only a friend to race against for competition and both maintain a great sense of community.  We could go on but you get the point. Despite the obvious differences, running and paddling are pretty similar!

One big difference between the two sports is that organized running competitions have been around for much longer than SUP racing.

Instead of reinventing a magic formula for stand up paddle race formats, SUPAA has taken cues from running and other racing sports to propose standardized race distances. The SUPAA 5K Short Distance, 10K Mid-Distance, 16K Pro Distance and 52K Ultra Distance courses are all written into the 2014 SUPAA Rulebook. We encourage race directors and athletes to provide feedback on these distances so we can work toward unified global race distances.

Not all events will fit into these exact distances, but we believe many can. There will still be opportunities for alternate distances with the SUPAA unlimited course option.

The SUPAA unlimited course is any course approved by SUPAA race officials as safe and fair for competitors at a SUPAA event. Standardizing the distances of SUP races has countless benefits for all stand up paddle constituent groups. Athletes can compare times to paddlers racing the same courses around the world, goals can be set to consistently improve on personal best times or to enter longer distance races and more people will be encouraged to participate because of the uniformity and consistency of SUP race courses.

The more uniform stand up paddle events become, the more appealing they will be to regular participants and new ones a like. Race directors will have a more clear picture of the courses they should offer in order to draw the most competitors. Standardized course distances combined with our rulebook will help stand up paddling become more organized.  Better organization will allow our sport to continue to gain participants and create a much broader appeal.

SUPAA is not trying to eliminate your favorite 12.5K race around your hometown island. We will continue to support these events and help them to be successful. However, we believe in creating some order for the majority of races that set random course distances.

More from SUPAA: board size restrictions.