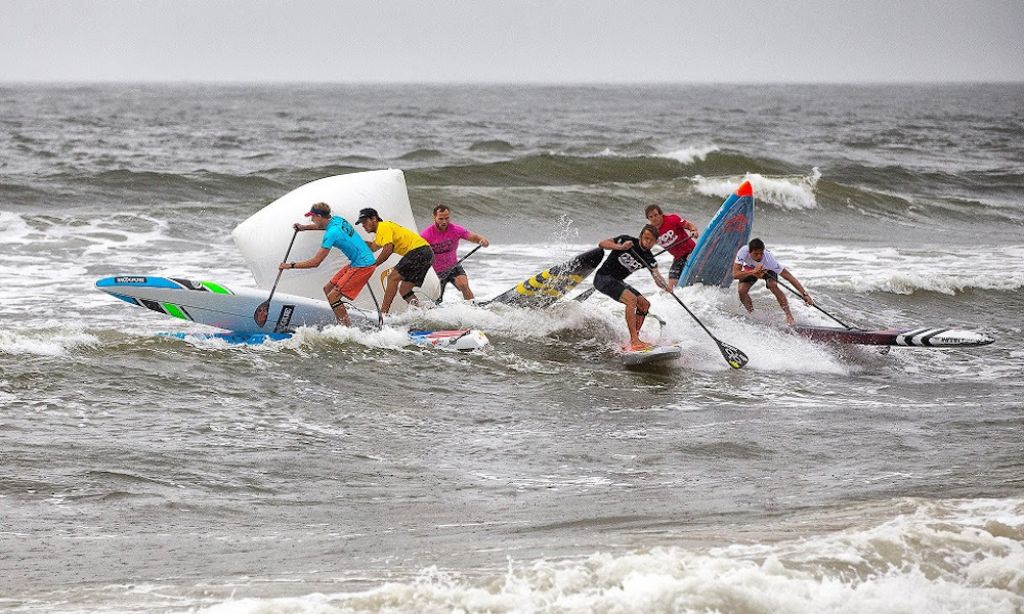 LONG BEACH, New York - What a show! Tuesday’s Sprints in Long Beach, NY are a perfect showcase to the power of the World Title athletes' sheer talent, focus and determination. Stormy conditions with thunder rumbling in the distance, created Tuesday’s race course with ample rain, whitewater conditions and wind.

But, what makes this sport great is that stand up paddle athletes of the APP World Tour caliber lean into wind and wild water with a shine in their eyes that makes the day count. In the end, the stoke on the water and excitement on the beach created a festival like atmosphere on a day when most mere mortals weren’t even sticking their noses out of doors.

The Men’s Heats were, as we know, stacked with class acts on the racing scene. Michael Booth (Starboard), Mo Freitas (Boardworks), Kai Lenny, Connor Baxter (Starboard), Arthur Arutkin (Fanatic) and Casper Steinfath (Naish), to name a few, toed the damp sand at the start line drawn by race director Anthony Vela to launch the day’s sprint races into the wind and chop.

Each round held stacked talent and each go-around through the M-shaped course held three buoys, including the legendary ‘hammer buoy’, located inside the surf zone. As APP organizers eyed the skies for lightning, the men charged through 3+ foot choppy swells to the first turn, followed by a potential surf to the hammer and out again to the third buoy before coming back to the beach.

Casper Steinfath, looking comfortable in the conditions, “Just like home, but warmer,” charged with his usual high energy and extreme gusto to break out towards that first turn. Kai Lenny, who shone so brightly in London during the Sprint Races, fought valiantly but due to hard luck and swell positioning eventually fell to the forces brought forth by Connor Baxter, Arthur Arutkin, Michael Booth and Travis Grant, to name a few. Young guns Tyler Basher, Maximillian Torres of Puerto Rico and Itzel Delgado or Peru all brought their fantastic energy to their respective heats, Basher advancing to the final round.

In the end, for the Final Sprint Round, the men lined up were a formidable force. Casper, Slater, Mo, Connor, Arthur, Kai & Michael in a torrent of wind and ferocious paddling charged the first buoy. It was anybody’s game as the waves swept racers board length’s back to restart their approach to the first turn buoy.

As Connor Baxter said, “It was a great race because, traditionally, whoever makes it to the first buoy first wins. But today had more strategy involved and that made it exciting.”

“I can’t believe we pulled it off,” said Race Director Anthony Vela. “We were just on the cusp of that front that pulled through.”

Exchanging places throughout the final round, it looked like anybody could win it. Kai took the wide line looking for the rip current sweep that had benefited Zane in an earlier heat. Mo, Connor and Boothie took the direct line and that served them well. Connor’s final run to the beach was one wave in front of the pack. As he leapt off his board onto the sand, he proved, once again, those Hawaiian waterman skills run deep in his being as he crossed the finish uncontested.

Close behind were Casper, Slater, Mo and Booth each firing on all pistons to get the job done. What an incredible show of sportsmanship and raw talent! Here are your men’s results below:

Full results to be posted at a later date. Stay tuned! 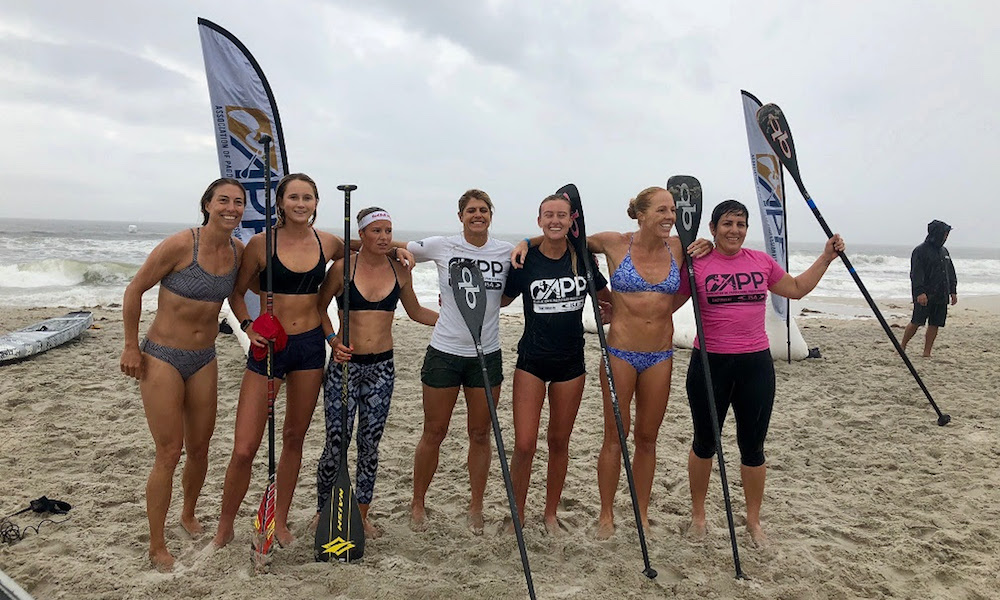 And now, onto the Women’s Sprints. Two rounds plus one repecharge heat. That’s the intensity the women had to contend with going into the Sprint Rounds. Not a lot of room for error. Not a lot of time to think.

Whitewash, wind and current all dominated the race course from the first round when the gals actually had thunder while on course and it looked as if the skies would open to unleash the darkest of underworlds before we were done. But, the women prevailed. In each round, their stamina and courage brought the crowd cheering down to the water’s edge in the pouring rain to celebrate these heroic women of stand up paddle racing. It was quite a performance. In an event like this, everybody wins.

“I’m really proud of myself,” says young Shae Foudy. “I didn’t want to go back out there after my first heat because I performed so poorly. But I got my head back together and hit the reset button. In the end, it isn’t about my placement but how I feel about my performance and I did OK.”

Terrence Black, struggled in her first round, only to come lashing back in the finals. Candice Appleby, looking focused and determined, laid out a solid performance throughout every heat. The ladies need to rethink their strategies this year as Candice is most certainly back in the heat of the battle and clearly in charge of her performance.

Annie Reickert won her first round by a wide margin and fell back in the following heats as the wind and weather played tricks with her board and forced her to slide backwards a time or two in the surf.

In a stellar performance, Giannisa Vecco of Peru made it through to the final rounds and charged the heat to finish third. The beach erupted as this underdog made her way through the final surf and, with Peruvian flags flying, Vecco smiling brightly jogged through the finish.

In that final heat, the battle looked to be between Infinity team mates Candice Appleby and Shae Foudy as both women paddled side by side for the final buoy. But, Aussie legend, Terrene Black took a strategic line wide and used the rip to round the buoy first and sail herself home to the finish in first place. Water skills and strategy won the day for this well-rounded waterwoman! Candice hit the beach and charged to complete her circuit in 2nd for that final round. Vecco followed in third. 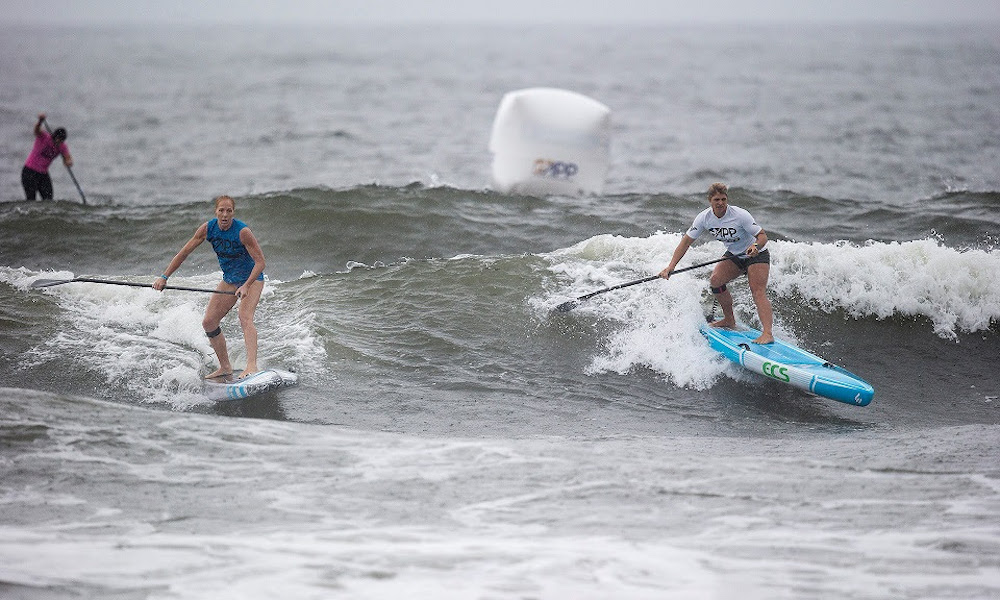 The APP World Tour produces a complete inventory of programming, including live and post produced broadcasts from its events, with distributions to over 100 countries worldwide via premiere Sports Networks including CBS Sports and FOX Sports Asia & Australia. More information is available at appworldtour.com and fans can follow the events @appworldtour on Facebook and Instagram. For more information on the APP's City Paddle Festivals, please visit citypaddlefestivals.com.