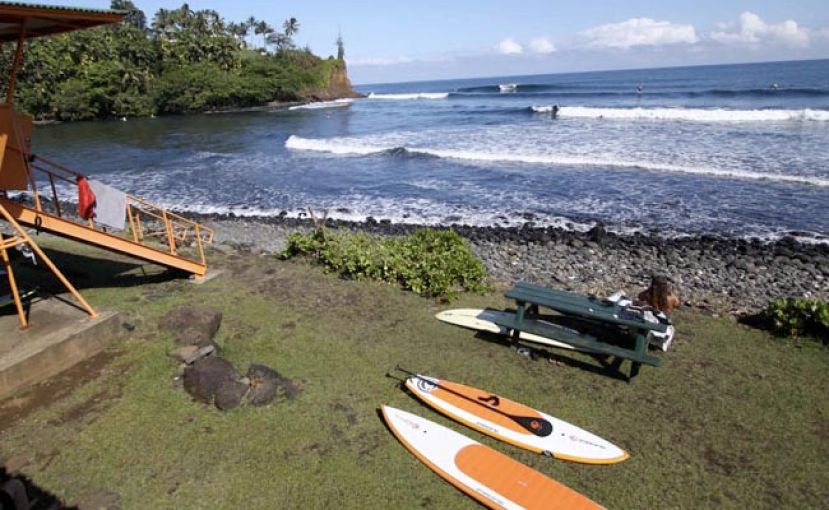 Surf cranking on the outside while stand up paddle boards lie at the water's edge waiting to be put in action.

BIG ISLAND, Hawaii – The Big Island of Hawaii provided the perfect setting for the climactic Finals of the 2010 Stand Up World Tour, with a welcome that surpassed any and all expectations, showcasing the true spirit of Aloha. From the County and its dynamic leader Mayor Billy Kenoi, to the support mechanism of the Paka crew at Honoli'i and our Big Island ambassador, Kalani Kahalioumi, the Big Island provided us with a welcome like no other, as they rolled out the red carpet for the 2010 Stand Up World Tour Finals.

The Trials, Wildcards and Youth

As expected, the Trials and Wildcards provided extremely worthy competition and a fresh new wave of talent for the Stand Up World Tour. From the Big Island talent in the form of the already well known, Ikaika Kalama, Kainoa Hauanio and Kalani Kahalioumi, to the incredible surge from the youth competitors in the form of Bern'd Roedigger, Ridge Lenny, Mo Freitas, Zane Schweitzer and local boy Ulu Boi Napeahi, the Stand Up World Tour continues to open up the doors to fresh new talent, making the Tour one of the most exciting and dynamic competitive platforms in Ocean Sports today. Check out the highlights by clicking here, or going to www.standupworldtour.com

The whole event saw spectacular riding from all 12 nations taking part in the 2010 Hawaii Island Finals, with the dominant figures for the Stand Up World Tour cleary demonstrating their dominance through the entire event. Brazil's Leco Salazar, winner of Stop 4 of the Stand Up World Tour in 2010, continued to show that he is going to be hard to beat in 2011, wowing athletes, judges and spectators alike with fluid and critical riding in every heat, and completing progressive maneuvres that will be setting the standard moving forward on the Tour. Likewise, Antoine Delpero, with an event win in France, a podium finish in Brazil and a second place here in Hawaii Island, will certainly be the man to beat in 2011, showcasing an impressive combination of fluid more longboard style maneuvres and critical snaps, more reminiscent of short board power and speed. Ikaika Kalama burst into contention here on the Big Island, having only competed in Sunset Beach and here this year, but making a statement as far as his presence on the Tour moving forward is concerned. Finally, although he was knocked out by the narrowest of margins in the quarter finals, Peyo Lizarazu continued to demonstrate why he has earned his position as current number 2 in the world on the Stand Up World Tour and was a real contender for the World Title right up until the dying moments of the Hawaii Island Finals.

But it was to be Kai Lenny's event, and Kai Lenny's year, with a dominant and seemingly unbeatable performance from heat to heat, taking the event win, and with it, the World Chanpionship Title for 2010. Having just turned 18, the future looks bright for this young and talented athlete, as his level and dominance of this year's Stand Up World Tour (with 2 wins, a 2nd and a 3rd counting towards his overall result in 2010) is staggering. Check out the highlights for the Main event, and heat by heat by clicking here , or visiting www.standupworldtour.com. At this site you will also find a more in depth overview of the event as well as photo galleries, together with a round up of the year as we look ahead to an exciting 2011.

Following the spectacular action during the week at Honoli'i, it was time to give back to the community, and to the future of its youth - we were once again were proud to work with Hawaii's Duane DeSoto and the non profit that he has founded to provide opportunities for Hawaii's underprivileged kids, Na Kama Kai. Na Kama Kai Mentors, Stand Up World Tour athletes and judges all got together to provide Big Island's youth with the opportunity to experience the wonders of ocean sports, and the culture that surrounds them, from the sports themselves to environmental awareness clinics and the hands on crafting of Alaia boards and canoes. A wonderful day for Big Island's keikis!
A local business expo showcased some of Big Island's vendors, accompanied by live Hawaiian music throughout both days of the final weekend - an event that will grow significantly in 2011.

Finally we held an open race, consisting of a 3 mile buoy course and contested by Masters, youth women and elite athletes. WInning the 14ft class was Bard de Swart, currently resident on Maui, while in the 12 ft class, Maui's Connor Baxter continued to assert his dominance in 2010 with a well deserved win. In the women, Jenny Kalmbach dominated her division and also beat much of the men's division, while in the youth, Riggs Napoleon once again showed why he is one of the greatest hopes for Hawaii in Stand Up Paddling's future. Finally, Big Island local Joel Tanabe brought home the honors in a great fun race around Hio Bay. For more detailed results, go to www.standupworldtour.com.

As we wrap the Tour for 2010, all eyes are now on Sunset Beach, on the North Shore of Oahu, for the Tour Opener in February. We will be releasing an end of year DVD for global retail sales, but also for purchase right here at www.standupworldtour.com. Please do keep an eye on the site for more highlight content, compelling profiles and more, but also for airing schedules for the Hawaii Island Finals show, that will be coming to your region over the coming months. In the meantime, all of us here at the Waterman League would like to wish you Happy Holidays, wherever you are and we'll see you next year. 'A hui hou'!