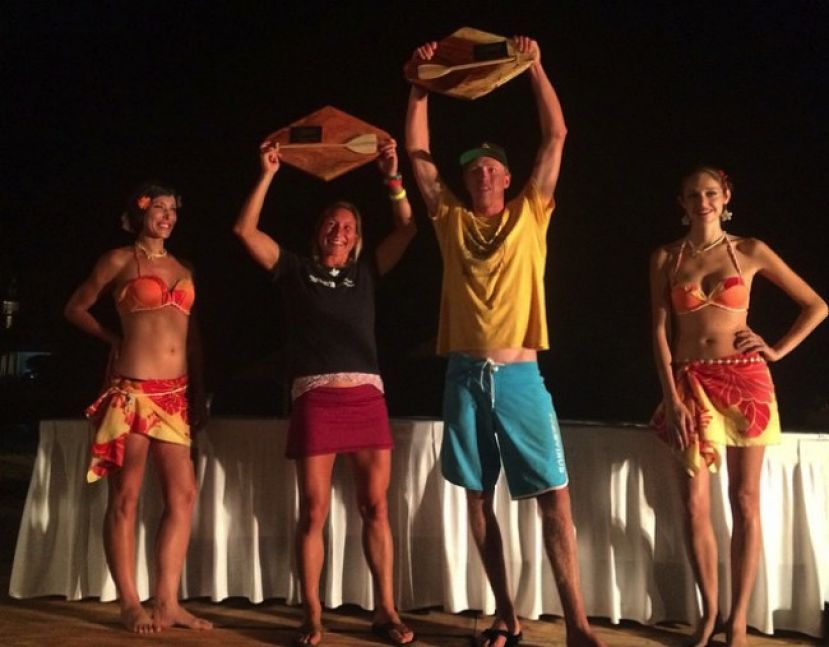 OAHU, Hawaii – SIC Maui Team Athlete Lina Augaitis sealed the 2014 Stand Up World Series title over the weekend with her results from the final round of the series at the Turtle Bay Resort on the North Shore of Oahu. Fresh off her Battle of the Paddle victory on her SIC X-14 PRO-LITE in the distance race, Augaitis was off to Oahu in a very tight race with Australia’s Angie Jackson for the overall title.

Going into the final day of the series, Augaitis needed a little bit of luck on her side. Jackson had the lead after her performance in the distance race. A massive set wave separated Jackson from her board, along with her title hopes. Augaitis took full advantage of this, as she paddled her way through the massive surf and back into the drivers seat for title contention. When the series was complete, Augaitis finished 1st overall for the 2014 Stand Up World Series on her production SIC X-12.6 PRO.

“Lina is a machine,” said Braly Joy, Marketing Director for SIC Maui. “Knowing that Lina only learned to surf a couple weeks ago and then went out and performed in these high surf conditions this weekend at Turtle Bay and last weekend at BOP is remarkable. She is a fierce competitor and just willed her way to victories this year, overcoming her fear of surf.”

“It's been a quite a year with numerous titles under my belt and winning the overall 2014 Stand Up World Series championships was a great way to finish off the season, especially after such an incredible BOP weekend,” said Augaitis. “The races throughout the year involved flat water, downwind, and surf, which tested all of our abilities as athletes. I was battling it out with Angie Jackson all year and it literally came down to the finals of the sprint race in tough wavy conditions. She is an amazing athlete and person and I couldn't have had a battle with a better person.”

“I am proud to put Canada on the map once again and proud to have such amazing support throughout the entire community,” Augaitis added. “Thank you for the support from SIC Maui for the amazing boards. The SIC PRO and PRO-LITE were my choice boards in the different water conditions throughout the year and they nailed it each time. Looking forward to some rest and more is to come in 2015. Live, love, laugh… DREAM!”

About SIC Maui
SIC Maui (Sandwich Islands Composites) is the vision of master shaper/designer, Mark Raaphorst. Mark has more than 20 years experience building surfboards, windsurfers and outrigger canoes. He is credited as being one of the pioneers of stand up paddleboards and for creating some of the most winning race boards in the world. SIC boards are designed for speed and agility. Their sleek styling, piercing waterlines, quality craftsmanship and attention to detail have also earned SIC the reputation of being the “Ferrari of SUP boards.” For more information on SIC, please visit www.sicmaui.com