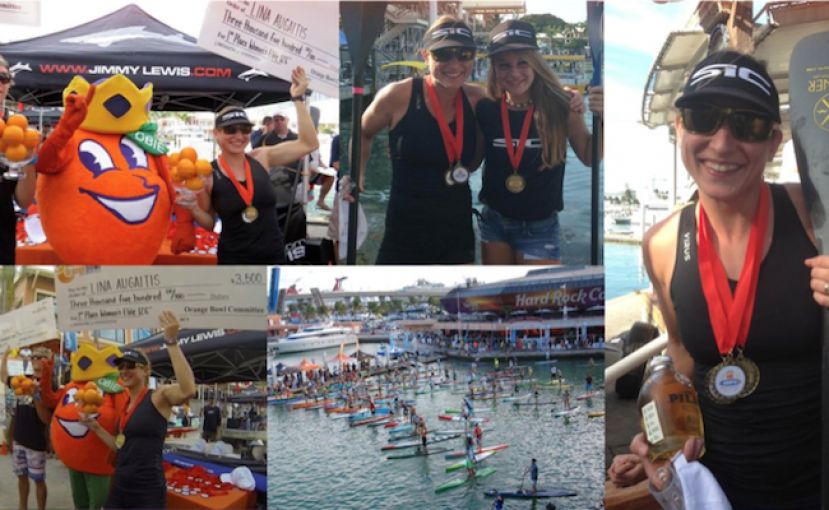 SAN CLEMENTE, California - This past Sunday was the Orange Bowl Paddle Championships in Miami Florida. SIC’s newest member of the family Lina Augaitis made the long trip from Vancouver Canada to the Sunshine State to compete in her first major race on the new SIC X 12 PRO. After leading the entire race Lina finished well ahead of the rest of the woman’s Elite field.

“We are very excited for Lina” said Braly Joy Director of marketing for SIC “We knew Lina was going to win a lot of races for us this year on the X 12 but to do it this fast was amazing.” Not only did Lina win the distance race she went on to win the sprint elimina- tion race later that day. After just signing with SIC, it is clear that both Lina and SIC are going have a very successful year.

“Awesome event," said Lina “It was very well run. The conditions were great, minimal wind, some boat chop, and lots of flat, the X 12 PRO responded perfectly. I was feeling confident on the board for whatever the conditions were at any particular moment throughout the 7-mile race. I have many people to thank for making this weekend such a success but most of all a huge thank you to SIC for making a stellar product and for just being plain old awesome!”

SIC “Sandwich Islands Composites” is the vision of master shaper/designer - Mark Raaphorst.  Mark has more than 20 years experience building surfboards, windsurfers and outrigger canoes. He is credited as being one of the pioneers of SUP, the first to integrate an Active Steering System into and SUP and for creating some of the most winning race boards in the world. Their speed and agility, sleek styling and piercing waterlines, quality craftsmanship and attention to details, have also earned SIC the reputation of being the “Ferrari of SUP boards”. SIC makes boards for intermediate to elite paddlers looking for the best in race, fitness/touring and surf. For more information visit: www.sicmaui.com