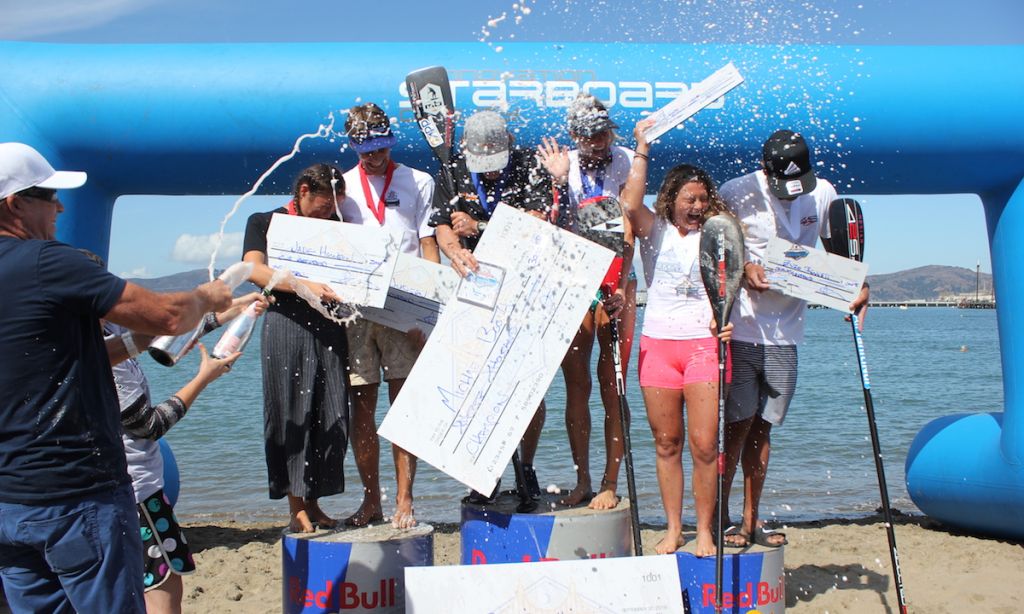 Champagne showers after the 8th Annual Battle of the Bay. | Photo courtesy: OnItPro

SAN FRANCISCO, California - San Francisco Bay welcomed paddlers for the 8th Annual Battle of the Bay over the weekend. The conditions were relatively calm, yet still made for a fun and competitive race for the international athletes. In the end, SIC Maui’s Seychelle and Starboard’s Michael Booth were too good, once again asserting their dominance in the distance.

The 7.5 mile (12km) Elite Race gives paddlers a bucket-list chance to race around the iconic Golden Gate Bridge. As a 4-star event on the Paddle League, the Battle of the Bay saw many of the world’s top racers in attendance and was a perfect lead up to the Pacific Paddle Games happening this weekend in Dana Point, CA. The results from this year’s Battle of the Bay were a great preview of the Paddle League showdown that is to come. 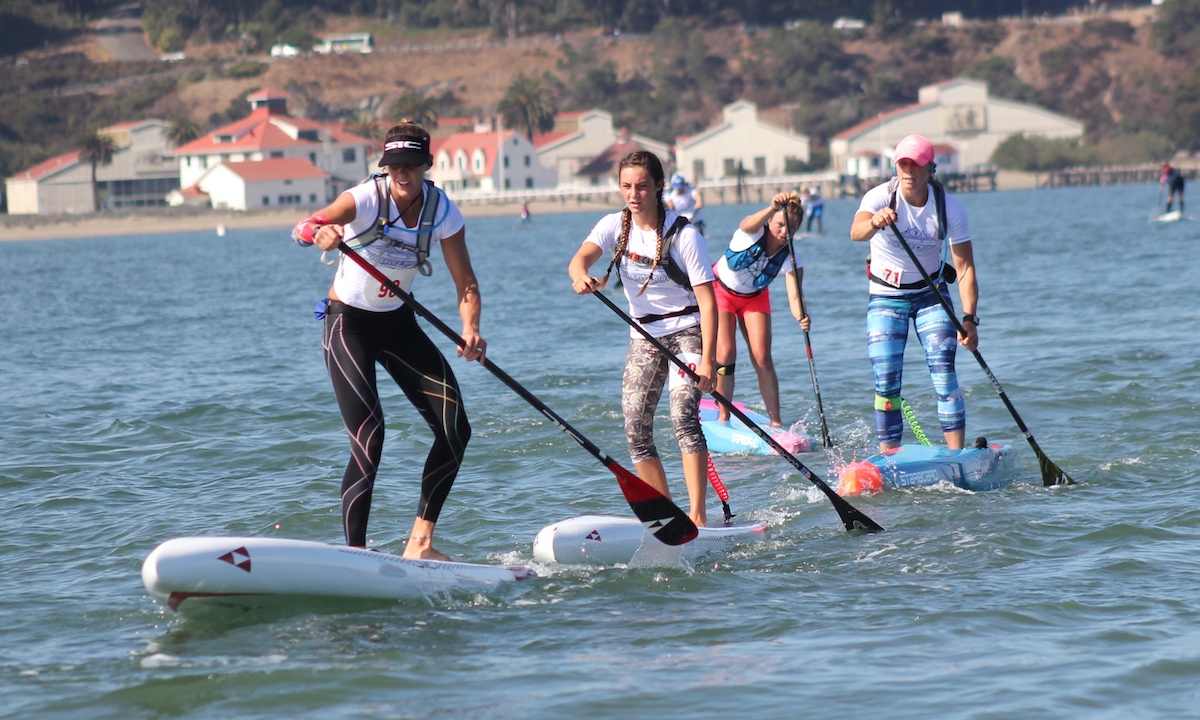 The Women’s Elite race saw a small yet extremely competitive field featuring three of the top four ranked women with Olivia Piana (France), Fiona Wylde (Starboard/USA) and Seychelle (SIC/USA) all gunning for the win. Fresh off of an incredible comeback victory at the SUP 11 City Tour, Seychelle was unstoppable yet again and showed her distance dominance with a victory at Battle of the Bay. In an impressive show of events, fellow SIC teammate Jade Howson stayed on her heels the entire race, finishing just a few seconds behind her to claim a well fought second place. The young gun continues to show that her victory in Santa Cruz earlier this year was no fluke and that she is more than capable of competing with the best.

Fiona Wylde and April Zilg were both solid, finishing third and fourth respectively. April’s fourth place finish moves her into the top 10 on the world rankings heading into the close of the season. Olivia Piana, despite holding the highest ranking and being the favorite going into the race, fell short in her performance after struggling to hit her stride on a borrowed board and ultimately finished fifth. 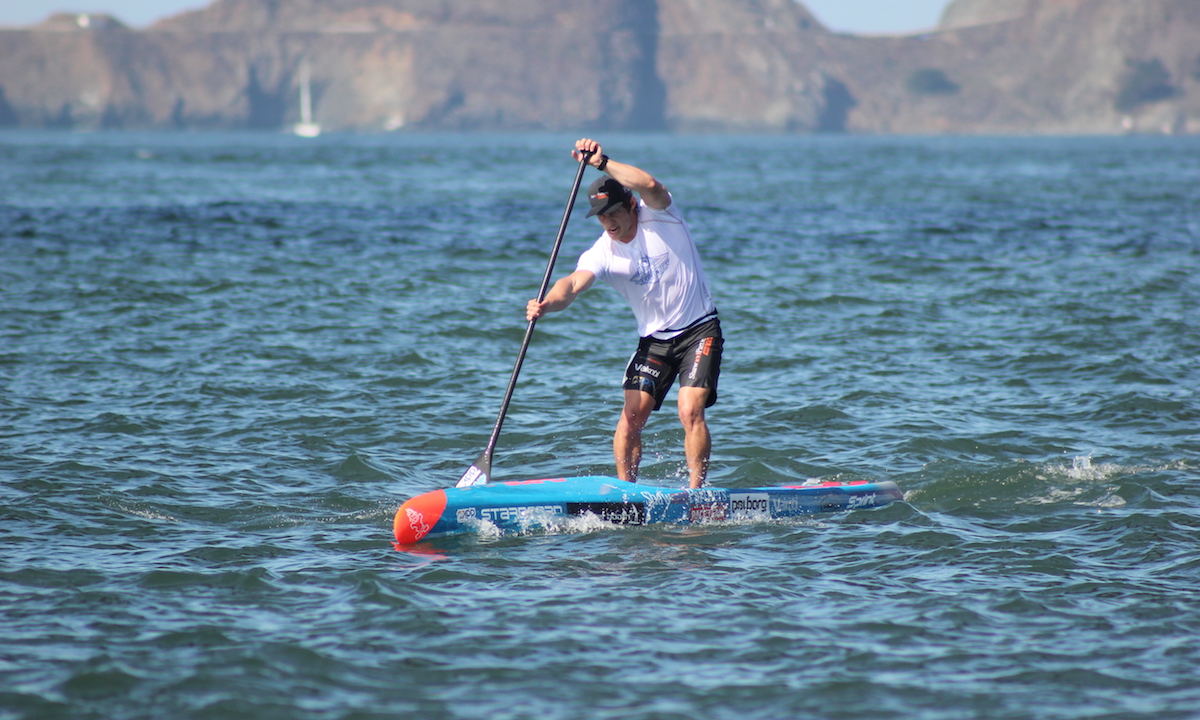 Michael Booth (Starboard/Australia) proved once again that he is virtually untouchable when it comes to distance. Despite a competitive field, Booth was able to break away and paddle clear to victory by over a minute, defending his Battle of the Bay title. Dark horse Ty Judson (NSP), one of Australia’s most highly underrated athletes, put in a highlight performance, allowing him to pull away from the pack and snag the second place spot.

The sprint for the minor places in the men's division was a hectic battle. | Photo courtesy: OnItPro

The sprint for third was tight, with just two seconds between third through fifth. Tahitian duo Enzo Bennett and Georges Cronsteadt (both 425 Pro) fended off number one seed Connor Baxter (USA/Starboard) in a fight to the finish, coming in at third and fourth respectively. Connor finished just a split second behind, rounding out the top five.

With this latest win, Michael Booth heads into the season-ending showdown, the Pacific Paddle Games, as a major favorite. He’ll only need to hold off fellow Aussie Lincoln Dews from winning in order to secure the inaugural Paddle League World Title.