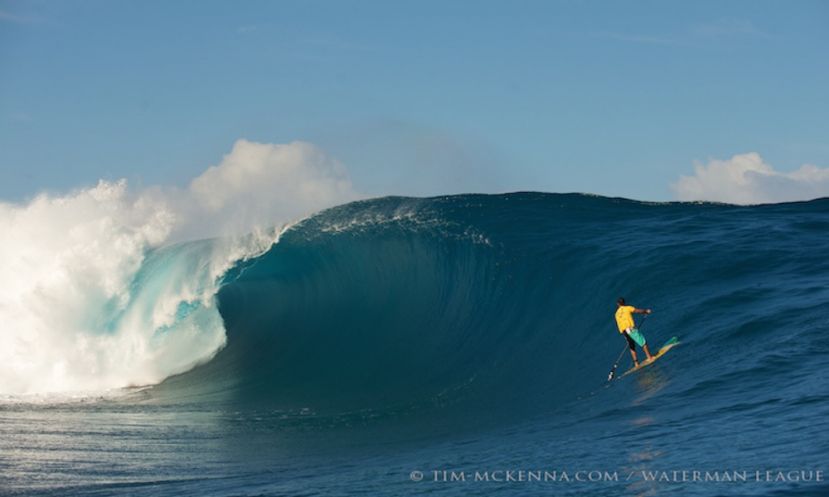 Stop 2 of the 2015 Stand Up World Tour will kick off next week in the magnificent Tahitian island chain as the #SapinusPro is back. | Photo: Tim Mckenna

After 3 years of intense action, Tahiti didn't feature on the global calendar in 2013 & 14, until its welcomed return this year as a flagship stop on the 2015 Stand Up World Tour. With a flurry of high surf advisories rolling in back to back over the coming few weeks, we are anticipating the most dramatic action yet for this year's spectacular edition of the #SapinusPro.

So make sure to stay tuned to www.watermanleague.com for the build up and all the action from the 2015 #SapinusPro Tahiti, as the World's best step up do battle in what is proving to be a very active south Pacific Ocean this year. 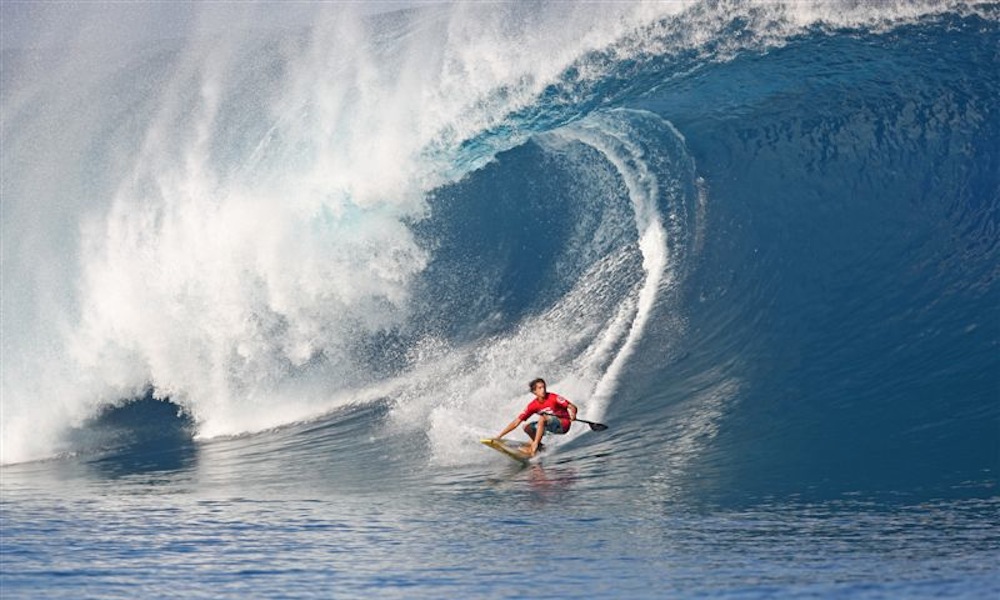 The front runners will be looking to consolidate on their position on Tour in their quest for the 2015 World Championship Title. | Photo Courtesy: Waterman League

The year started off with a bang, as defending World Champion Kai Lenny (Naish) stamped his authority and made his intentions known at Stop #1 on Oahu's Fabled North Shore at Sunset Beach. However, despite having scored perhaps the most memorable barrel of the event's history back in 2011, Kai's track record in Tahiti hasn't been flawless and it is one of the few stops on Tour that he has been unable to win. He will be looking to rectify this in 2015, as solid swell and barreling surf are right up his alley, and there will be this on tap for the 2015 #SapinusPro.

Caio Vaz (Art in Surf) continues to be right on Kai's heels and every bit capable of a World Title, as his backhand barrel riding skills will be tested in the magical conditions found at Sapinus. As one of the most consistent and high performance athletes on Tour, Caio maintains his #2 position coming into this event, as we await to see how it will play out and if the two front runners will make it for another final together. 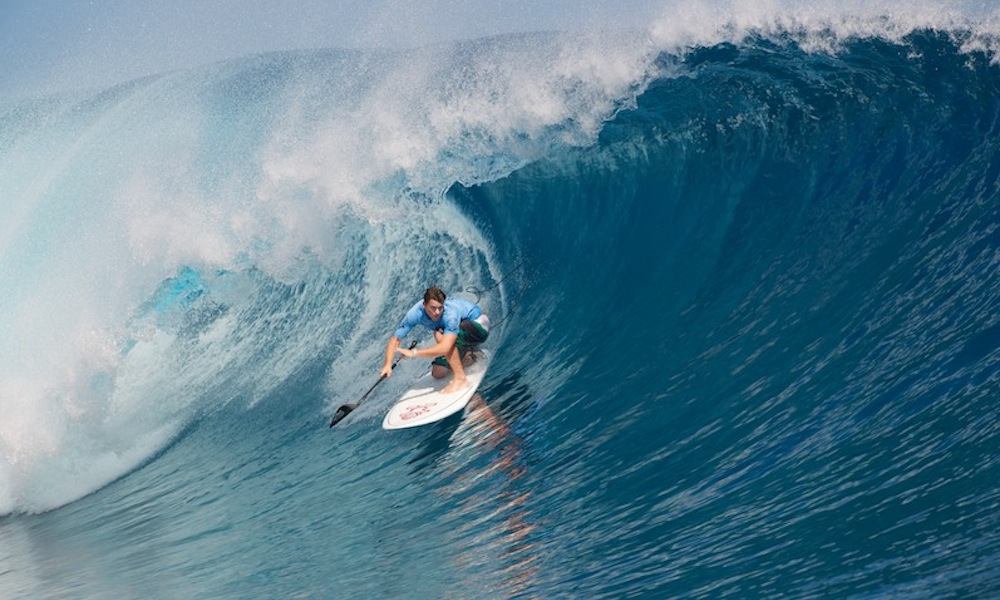 Sean Poynter has to be one of the favorites coming into this event, especially off of his big win at the ISA's in Mexico. | Photo: Tim Mckenna

Sean Poynter (Starboard) has to be one of the favorites coming into this event, despite a disappointing performance at Sunset this year. Having finished in 3rd overall and on a major winning streak in 2014, taking out the #LaTorchePro France and then the Location X Finals in Morocco, Sean was also the event Champion at the last edition of the #SapinusPro Tahiti that took place back in 2012. He is on a roll, and his surfing is looking sharper than ever, so let's see what the American can do at this pivotal stop #2 of the 2015 Stand up World Tour.

With a new year, comes new surges of energy and commitment to performance on Tour: this year was no different, as we saw stand out performances from Justin Holland (Starboard), Zane Schweitzer (Starboard) and Keahi de Aboitiz (JP Australia) amongst others. 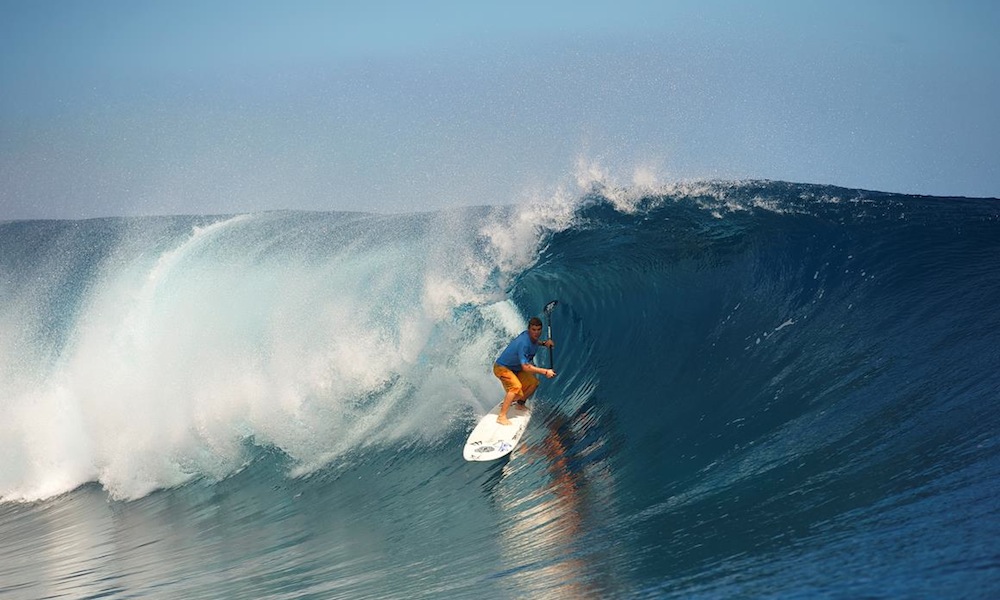 As a goofy footer from Maui, Zane Schweitzer will feel right at home surfing the waves of consequence that Tahiti offers. | Photo Courtesy: Waterman League

Justin has long been a real threat on Tour, but was absent from the tail end of the year. However, he arrived at Sunset with more energy and more prepared than ever, posting a 3rd place finish at Stop #1 of the 2015 Tour. In addition, Justin posted a 3rd place at the last event in Tahiti back in 2012, so will be looking to continue his upward curve through this all important and well suited stop.

Zane also looks brimming with confidence and more prepared than ever this year, and as a goofy and no stranger to waves of consequence, invariably delivering the unexpected, he is set to put on a strong performance in 2015, as he looks to continue is ascent up the ratings ladder.

Finally Keahi started the year in 2014 on fire, sitting in the top 3 overall after Brazil, but was forced to miss the rest of the year due to injury. Looking sharper than ever at Sunset, Keahi is a great barrel rider and will be looking to make his mark at this year's #SapinusPro. 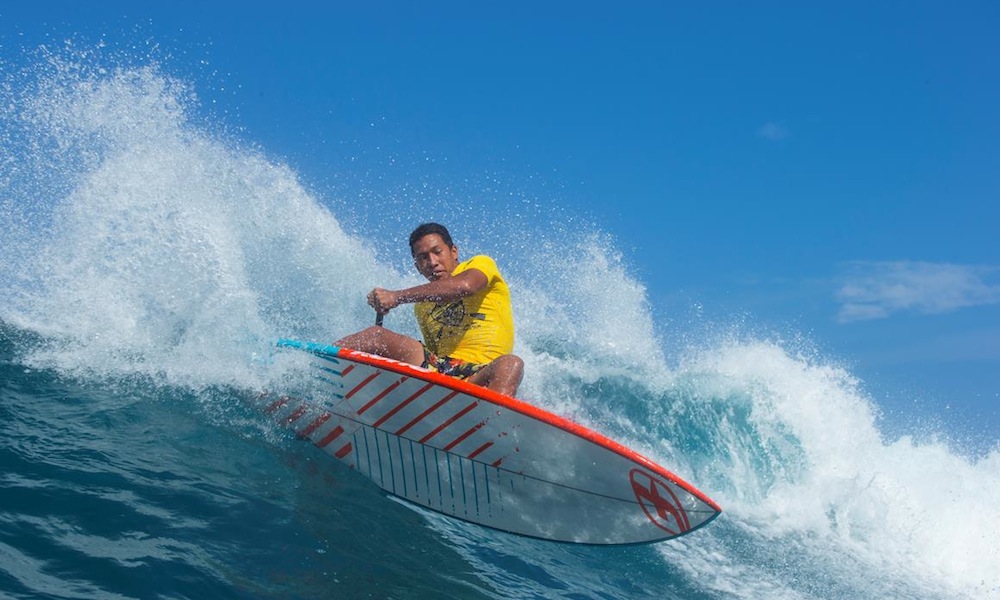 The Young Guns are looking to take charge in 2015. | Photo: Brian Bielmann

The potential for the future has become the reality of now this year, as the young guns on Tour continue to show not only moments of brilliance, but consistently strong performances as they take down the world's best.

The leading figures of this new movement are without doubt Mo Freitas (Focus SUP) from Hawaii and Poenaiki Raioha (F-One) from Tahiti, who together define some of the most progressive Stand Up surfing in the sport. Watch out for these two formidable talents as they will be hoping to dominate at this year's #SapinusPro.

However, they are not alone, as a whole host of young talent will be stepping up to do battle, from Tahiti and beyond, as Nainoa David (Naish), Mauiki Raioha (F-One) and a whole host of other young talents from Tahiti will be met with athletes such as Julien Bouyer (Naish) from France, Kai Bates (Fanatic) from Australia and many more, as the battle will be on at the iconic break of Sapinus. 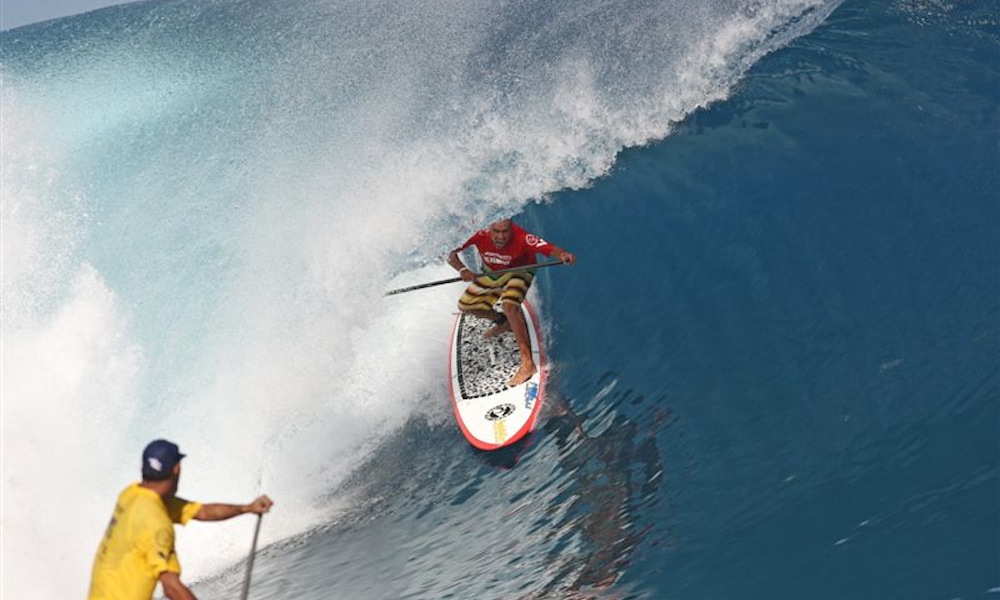 The Legends will look to hold their own at a break that favors experience, barrel riding and power surfing. | Photo Courtesy: Waterman League

History has shown, that a certain kind of surfer has dominated the #SapinusPro, and experience and local knowledge certainly play a significant role.

Arsene Harehoe (Rogue SUP) and Vetea David, 'Poto' (Naish) have long been Tahiti's leading lights and founding fathers so to speak, consistently dominant against the world's best out at their local break and remain real threats for the #SapinusPro Title. Likewise Tama Audibert (Starboard), Patrice Chanzy (F-One) and Guillaume Bourliguaux amongst many other Tahitian talents represent a real challenge for the World's best stepping up to do battle.

Beyond Tahiti though, we will see the return of 2010 Champion, the powerhouse Dave Muir (IOPS) from Western Australia, an athlete who toyed with the solid surf in 2010 and 11 to post a win in the first year and a semi final berth in 2011. His unique style of powersurfing comes to life in these kind of waves as we anticipate great things from the big guy from down under.

So, make sure that you check out www.watermanleague.com over the coming week as we build up to a week to remember here on the Stand Up World Tour, as we make history once again with the return of the #SapinusPro Tahiti, stop number 2 on the 2015 Stand Up World Tour.

Having highlighted some of the major players in advance of this exciting Tahitian stop on the 2015 Stand Up World Tour, it should be emphasized that the talent pool runs impressively deep, as we expect to see no shortage of surprises and breakout performances as we build up to one of the most dramatic events of the year. 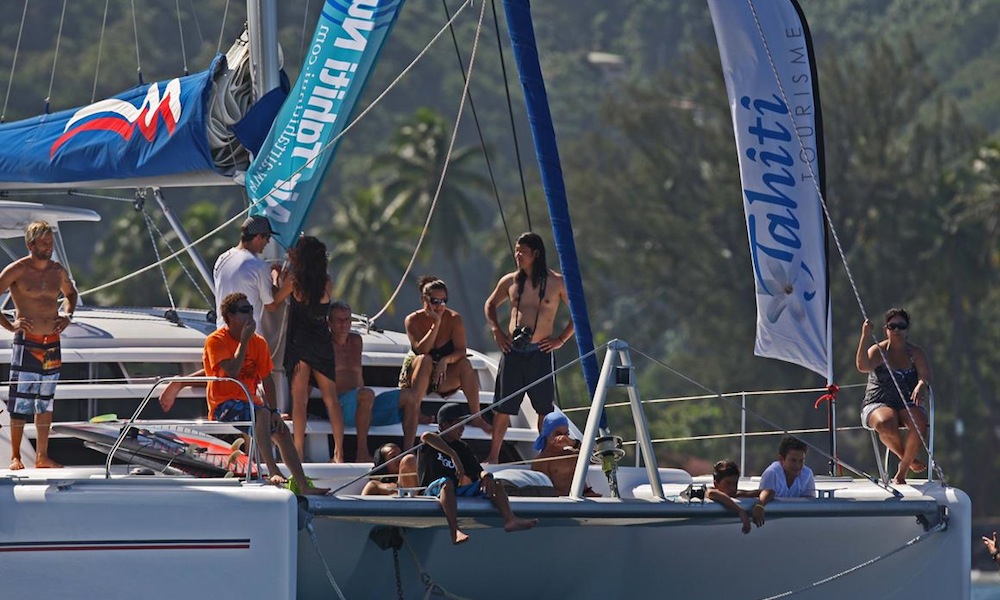 A big Mahalo to the proud partners of the 2015 Sapinus Pro Tahiti. | Photo Courtesy: Waterman League

Tahiti is a magical destination and we are proud to partner with AIr Tahiti Nui and the Tahiti Tourism Board for the 5th year on this historic edition of the Sapinus Pro Tahiti 2015. We are excited to take to the water once again with the Official Yacht Charter company of the Stand Up World Tour & Series, the Moorings, as the event HQ will be aboard their all new and ideal 48ft catamaran. There is no better place to view the action than aboard this beautiful boat.

We are also proud to have the support of the Government this year, showcasing their commitment to the development of sports intrinsic to the Tahitian culture and way of life, but also Coca Cola, OPT, Hyundai and all our other local partners for an event that will once again put a mark in the sand for the evolution of the incredible sport of Stand Up Paddling.

See more news on Stand Up World Tour Events here and watch the preview for the event below.

More in this category: « Standup for the Cure Announces Muskegon Event to Benefit Susan G. Komen for Mammogram Screenings for Women in Need Why SUP? »