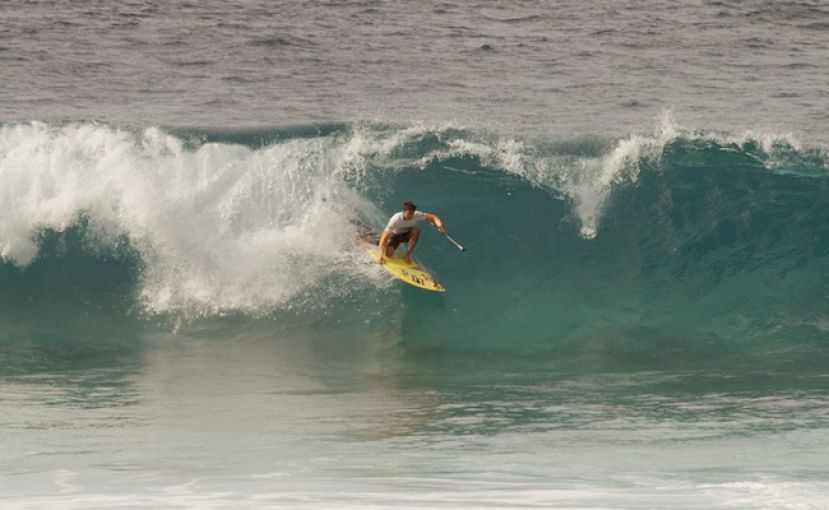 OAHU, Hawaii - History was made Friday at Pipeline in celebration of the 50th Anniversary Duke Kahanamoku Invitational, as the Da Hui Backdoor Shootout kicked off with a showcase of all forms of 'wave sliding', from the simplest form of bodysurfing right through to Stand Up Paddling, as Hawaii's best stepped up to do battle at the infamous Banzai Pipeline at the prestigious Stand Up Paddle Invitational.

Despite somewhat challenging conditions, with a slowly building swell and light onshore winds, the athletes stepped up to put on a show and put on a great first showcase for the sport at this prestigious location.

Stand outs in the early rounds of the Stand Up division were current World Champion Kai Lenny (Naish), Bullet Obra from the Big Island, Nolan Keaulana from Makaha, Keali'i Mamala from the Big Island and Ikaika Kalama (Rogue), also from the Big Island, as they searched for barrels and found sections to accrue the points they needed to advance. Despite not advancing, Noa Ginella (Naish) showed real commitment, pulling into a couple of heavy sections, making his presence felt and impressing the Judges.

In the final, Keali'i Mamala was active from the outset, but a couple of strong comeback waves secured Kai Lenny's victory, and strong surges late in the heat by Kainoa McGee and Bullet Obra boosted them back into contention, to finish in 2nd and 3rd respectively.

While it wasn't the 'barrel fest' we were hoping for today, the athletes put on a great show and were proud to be part of this surfing celebration in memory of the Duke at the iconic Banzai Pipeline. Check out the initial highlights by watching the video below.

To watch more of the event and for updates, head to the watermanleague.com