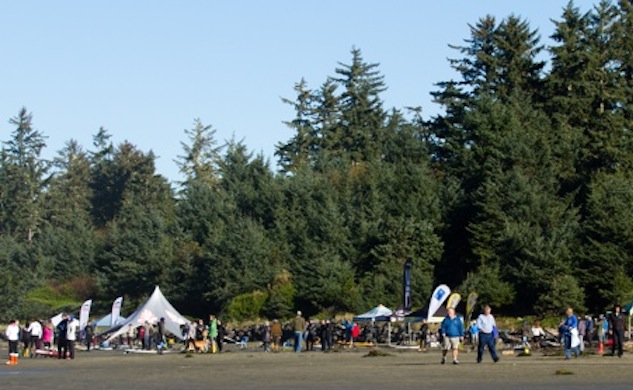 TOFINO, Canada - It poured. It howled. The sun even made an appearance. Through it all 64 stand up paddlers from all over the world surfed their hearts out in Tofino October 25 and 26 in the 1st Annual Tofino Paddle Surf SUP Invitational. In the end three stood on the top of the podium - Diane Wenzel in the women's division, Heath Thompson in the open men and Kiel Harvey in the amateur.

With the result Wenzel, Thompson and Stuart Robinson, who placed second in open men's, all qualify for the Canadian national team heading for the ISA world championships in 2015.

"The level of surfing was amazingly high and Thompson put on and incredible and very inspiring performance for everyone at the event," says Catherine Bruhwiler, the contest organizer and silver medalist in the women's contest. "I can't thank everyone enough - the volunteer team, co-organizers and family, all the amazing sponsors and of course, the contestants. It was an amazing weekend and we're already planning next year’s event."

The head judge, Chris Freeman, flew in from Hawaii to help run the contest. It was his first time in Tofino and he was blown away by the area, calling it the one of the most naturally beautiful places he'd ever been.

"Tofino delivered great waves, tough competition and lots of new friends," Freeman says. "With three divisions the schedule would always be tight but thanks to the hard work put in by the many volunteers the event ran incredibly smoothy, especially for an inaugural event."

Competitors packed the Tofino Brewery on registration night, with 28 men entered in both the open and amateur categories and 8 in the women's. The oldest was 55, the youngest was 14, and competitors came from across Vancouver Island, B.C., and as far away as Ontario, Nova Scotia, the U.S., Czechoslovakia, Italy and Hawaii. On Saturday competitors and volunteers woke to pouring rain but clean surf at North Chesterman Beach. The rain barely let up all day, but no one involved let the liquid sunshine dampen their enthusiasm, says Bruhwiler.

"It was wet, wet, wet, and everyone managed to stay so positive and comfortable in their wetsuits or rain gear," she says. "The beach was none stop action with the heats running back to back all day. And there was a great contingent at the waters edge cheering everyone on."

"Most of the riders were new to competitive paddling and so it was so rewarding to see them having fun in the waves," says Freeman. 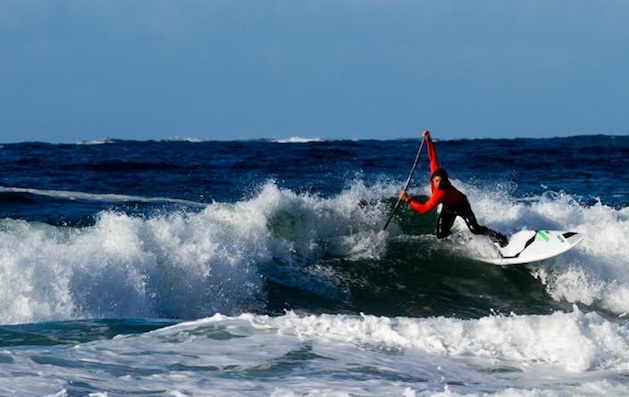 Everyone was excited to see the sun on Day 2, but the surf was choppier. Again the competition set up at North Chesterman's with Surfcam.ca live streaming the action with commentary for the final heats. All the footage is available at contests.tofinopaddlesurf.com. More than 2000 people viewed of the live webcast over the weekend.

As the contest field was steadily eliminated through the day the conditions became progressively more challenging with strong onshore winds and building surf.

"The riders put on a great show trading rides in the head high waves with the beach crowd cheering the best moves," says Freeman. "As the qualifier for the Canadian SUP team the tension was high in the Open and Women’s divisions and this pushed the riders to new highs."

In the men's open final Tofino Paddle Surf team rider Heath Thompson put on a show, outperforming the other surfers with powerful cutbacks and turns, his time growing up on the North Shore of Oahu and three years living in Tofino showing.

In a tightly contested women's final Diane Wenzel squeaked past Catherine Bruhwiler. Wenzel, a Canadian who grew up in Edmonton, runs a SUP and windsurfing school in California.

After the contest wrapped up, most of the competitors and volunteers headed to the presenting sponsor Wolf in the Fog, a local pub and restaurant. With bucket fulls of door and raffle prizes up for grabs almost no one went home empty handed. The winners of the three divisions each received trophies by Tofino artist Sol Maya and a SUP board donated by sponsors. More than $1000 was raised for the contest's charity Surf's Up.

With food served family style and live music from Parab Poet and Hip Hop Hippies the party raged into the night.

Results and footage can be found at contests.tofinopaddlesurf.com and plenty of photos are up on the Facebook Event page.

"It was such a fun event in so many ways," says Bruhwiler. "I can't wait till next year."