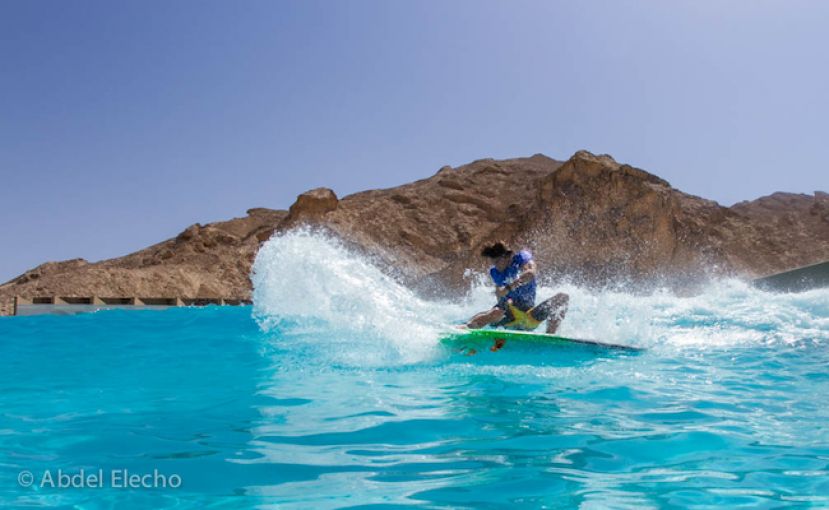 The Stand Up World Tour Surfing component of the Abu Dhabi All Stars Grand Slam got underway today with the first round of the Main event for the Men, and warm ups for both Men and Women.

ABU DHABI, United Arab Emirates - Today was day 1 of action from the Abu Dhabi All Stars Grand Slam, the 3rd stop on the 2014 Stand Up World Surfing Tour, which will run through Tuesday. The World Series Racing component of the Grand Slam will then kick off with a press day at Yas Marina this Wednesday and racing action on Thursday and Friday at Yas Marina and Saturday at the Abu Dhabi Sailing and Yacht Club. There will be a daily broadcast at www.watermanleague.com

Day 1 Recap
The Stand Up World Tour Surfing component of the Abu Dhabi All Stars Grand Slam got underway today with the first round of the main event for the Men, and warm ups for both men and women. The scene was set for a day of insane action with the unique backdrop of desert complementing the bright blue pool found at the base of the mountains at Wadi Adventure Park.

Caio Vaz (Art in Surf), current Ratings Leader on the Stand Up World Tour set the tone for the day, notching up a 7.8 and an 8.2 for a heat score total of 16.0. This was a great start to his event campaign.

The next standout came in the form of the young Tahitian Poenaiki Raioha (F-One) who post a phenomenal 7.7 and 8.5, for a heat score total of 16.2.

Zane Schweitzer (Starboard), picked up where he left off as Abu Dhabi All Star Champion from 2013 by putting together a flawless heat with an 8.5 and an 8.4, for a heat score total of 16.9. He was at the top of the leader board for much of the day. 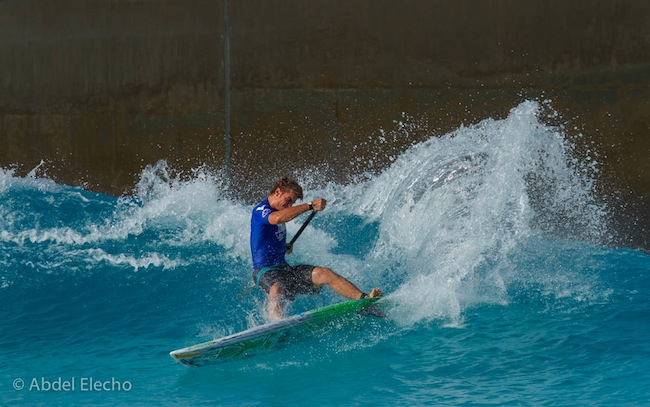 Zane Schweitzer at the Abu Dhabi All Stars 2014 - Photo by: Abdel Elecho

However, the tables were turned, when Sean Poynter (Starboard) took to the water in Heat number 10.  Despite a slow start on the lefts, he hit all cylinders on the right, with the highest wave score of the day of a 9.2. He then backed that up on the closeouts with an 8.0 which boosted him to the top of the leader-board with a total heat score of 17.2.

The final two heats also saw some great action, as Keahi de Aboitiz (JP Australia) put on another strong performance posting a pair of 7.7s for a heat score total of 15.4. Similarly, Kody Kerbox (Naish) put an exclamation on the day with a final closeout wave scoring him an 8.3, which when combined with his 7.1 high score for his rights gave him a heat score total of 15.4.

All the athletes gatered together at the Abu Dhabi All Stars 2014 - Photo by: Abdel Elecho

The riders opted to go for a Repechage format for this event, that differs to the normal repechage set up with the top 12 highest scores advancing directly through to Round 3 and the remaining 20 athletes going into a Sudden Death / Repechage Round to fill the final 4 spots. This Repechage round will feature only closeout waves, with each rider getting 4, and their best 2 scores combining for their heat score total to determine whether they qualify or not. So a lot of tension is mounting in Abu Dhabi as they prepare for the second day of action at the Abu Dhabi All Stars.

Join the action tomorrow morning live from Abu Dhabi for the culmination of Round 1 for the men followed directly by round 1 of the women, the men's repo and the women's repo. You can watch it all go down LIVE at www.watermanleague.com

In the meantime, here is the current leaderboard from the event subject to change pending scores from the final 8 riders of round 1 for the men which begins at 9am UAE time (Monday morning).