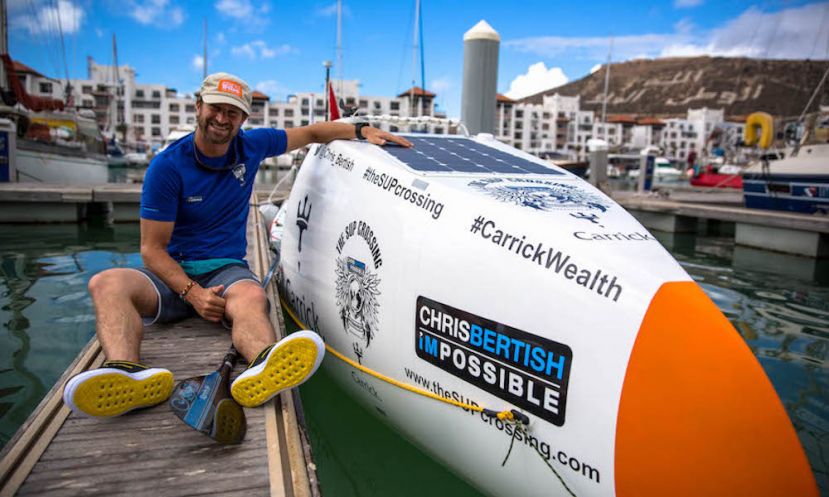 AGADIR, Morocco - Tuesday, December 6, at 6AM GMT, Chris Bertish, internationally acclaimed Speaker, Big Wave Surfer and Guinness SUP World Record Holder, launched off the Northwest coast of Africa in Morocco to embark on the first ever solo, unsupported, full length, Transatlantic SUP Crossing. The groundbreaking expedition, #theSupCrossing, will see Bertish travel unsupported and unassisted, on a custom-made 20-foot long stand up paddle craft, for four straight months across the Atlantic Ocean, all in support of charity.

Dubbed, the greatest solo, open ocean adventure ever attempted, Bertish departed from Agadir in Morocco, early in the morning on December 6, 2016, after completing the final craft testing, preparations and awaiting the right weather window to launch. Starting off on the Northwest coast of Africa in Morocco, he began the voyage to the Canary Islands, across the Atlantic Ocean towards the Caribbean Leeward Island of Anegada, before finally ending the journey in Florida.

After six months of building the craft, months of intense training and preparation and five years of stringent planning, Bertish will paddle across 4,600-miles of open ocean, traveling the equivalent of a marathon a day for over 120 days straight.

Every element of the crossing has been meticulously accounted for. Bertish spent a significant amount of time co-designing the world’s first, Transatlantic SUP craft, which was specifically designed for this crossing. He took learnings from his experience on countless prior world record attempts and achievements, as well as knowledge from his sailing and big wave ocean experience, coupled with elements from his record breaking, open ocean SUP's and the Transatlantic row boat crafts, to create a completely unique craft, designed specifically for one goal, one purpose, to cross the Atlantic Ocean.

"I'm really excited and looking forward to leaving, as this has been a 4-year project in the making and lifetime of preparation and I'm ready. My specialized SUP craft is incredible, I have an amazing team behind me, supporting me from land and an unbelievable support from friends and people all around the world for this incredible journey, which is going to change the lives of millions of children in Africa, which is what will keep driving and inspiring me right till the end," said Chris before departing in the early hours of Tuesday morning.

The main purpose of the crossing is to raise funds for The Lunchbox Fund, Operation Smile and Signature of Hope with the target of raising over one million dollars and making the entire project a self-sustainable charitable initiative that will have a lasting legacy for generations to follow. Bertish will also be working with, doing research and raising ocean conservation awareness for the Two Oceans Aquarium, over the course of the journey.

To get involved and contribute or donate, please go to: thesupcrossing.com/donate/
To follow Chris’ journey click here: