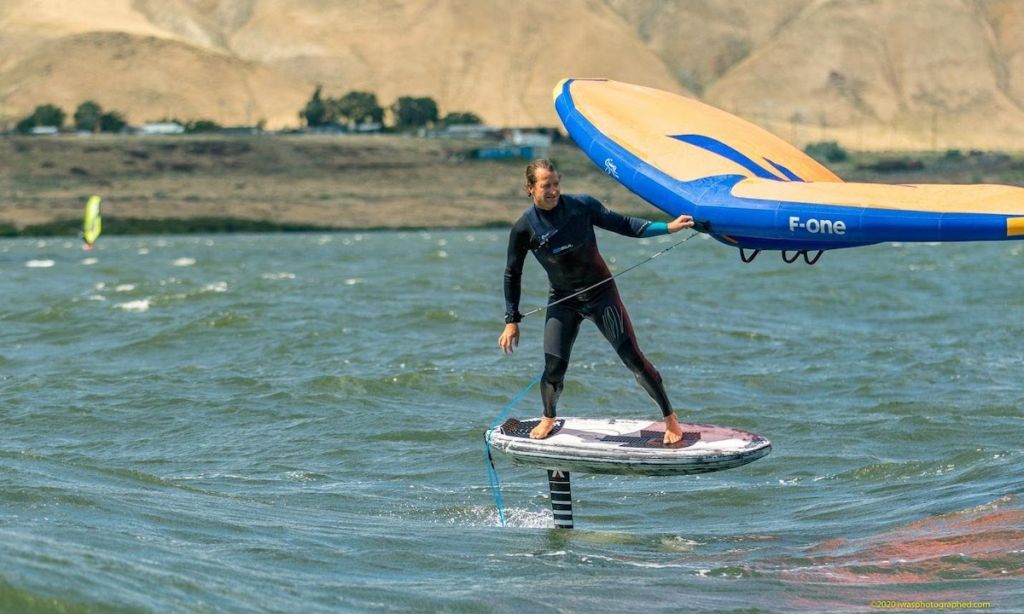 HALF MOON BAY, California - Chris Bertish, internationally acclaimed speaker, author, big wave surfer, Guinness SUP World Record holder and Conservationist, announced plans to embark on the Transpacific Wing Project, the world’s first solo, wing foil, transpacific crossing in June 2021. Today an IndieGoGo crowdfunding campaign was launched to amplify the adventure and to help get the project funded, which is in support of education, conservation and sustainability.

The two-month-long record-setting Transpacific Wing Project follows Bertish’s world first, 2017 solo, unsupported, Transatlantic Stand up paddle Crossing that garnered global attention and raised money for multiple global charities. For this next adventure, Bertish will solo wing foil 2,850 miles across the Pacific Ocean from Half Moon Bay, California to Oahu, Hawaii. The journey will require Bertish to complete the equivalent of more than two full marathons per day, winging a minimum of 8-12 hours per day, for over fifty days, unsupported and completely unassisted. The Transpacific Wing Project craft was custom built for Bertish’s 2017 solo, stand up paddle journey across the Atlantic Ocean. The craft has been updated and significantly modified for the Transpacific Wing Project with the additions of purpose-built hydrofoils, the most advanced satellite communication systems, radar, GPS technology and multiple sized powerful wings, which he will be standing and holding to harness the wind and help power him on his journey across the Pacific.

“This is a perfect time to remind ourselves and the world that we are all far stronger and more resilient than we realize,” commented seasoned waterman, Chris Bertish. “Not only can we navigate the change and the challenges of this pandemic, but we can all accomplish anything we set our minds to.”

The Transpacific Wing Project was created to provide hope during challenging times and inspire audiences to overcome the seemingly impossible obstacles and turbulent times in life, to be able to achieve anything, even the seemingly impossible. The project will raise funds and awareness for multiple charitable organizations and global initiatives including Operations Smile, Conservation International and ocean education and sustainability programs, all through the Chris Bertish Foundation, created to build awareness, give back and be a beacon of inspiration and positive change for youth and for the world.

To get involved and join the adventure, visit the Transpacific Wing Project here.

For more information on Chris Bertish follow along on these channels:

Chris Bertish is driven by passion and commitment and has achieved some of the greatest feats in surfing and stand up paddle boarding history. He is a waterman who turns adversity into opportunity and no challenge is too great or impossible for him. As an international speaker, Chris inspires audiences with stories of courage, determination, resilience and overcoming insurmountable odds to achieve seemingly goals and dreams, while raising awareness for challenging ocean conservation and climate change issues globally. Chris won the 2010 Mavericks Big Wave Invitational event in Half Moon Bay, California in some of the biggest waves in history, merely hours after touching down from a 36-hour flight from South Africa, on a borrowed board, against all odds. 2013-14, Chris set three separate Stand up paddle World Records, two in Europe and the Open Ocean, 12-hour SUP Guinness World Distance Record. In 2015 he co-directed and released the acclaimed film Ocean Driven, and launched the best-selling book Stoked! both about his life story.

In 2017 Chris redefined adventure by stand up paddling solo and unsupported across the Atlantic Ocean, over 4,000 miles from Morocco to the Caribbean in 93 days, raising money for Operation Smile and the support of youth, education and ocean conservation initiatives. The Transatlantic SUP Crossing won Chris the "Man of the Year Award” in 2017 by Supconnect and was named one of the Top-100 Genius Icons, by Global Genius 100, Leaders of Innovation and Creativity, by the Einstein Institute in 2018. His second film, “Last Known Coordinates” about his epic Transatlantic stand up paddle journey is set to launch globally in mid 2021.