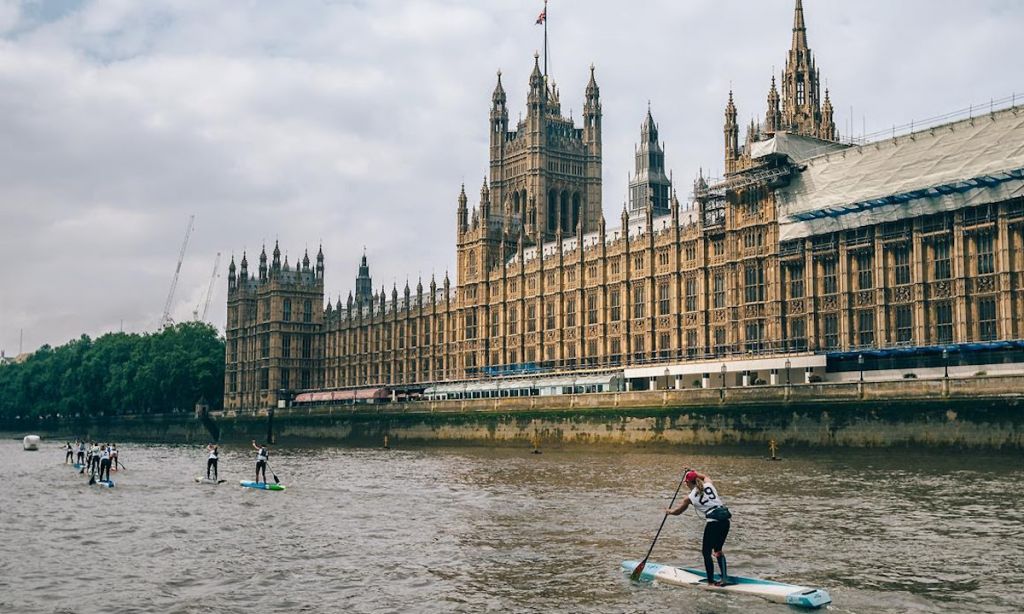 LONDON, United Kingdom - The London SUP Open broke wide open over the weekend with heated performances on the Thames River where athletes crossed the finish line mere tenths of seconds apart to set the bar for a competitive 2019 SUP racing season on the APP World Tour.

Lining up under perhaps the most spectacular start line in history with the majestic London Tower Bridge looming overhead, APP Tour athletes - both men & women - charged off the start and into a new season ahead. 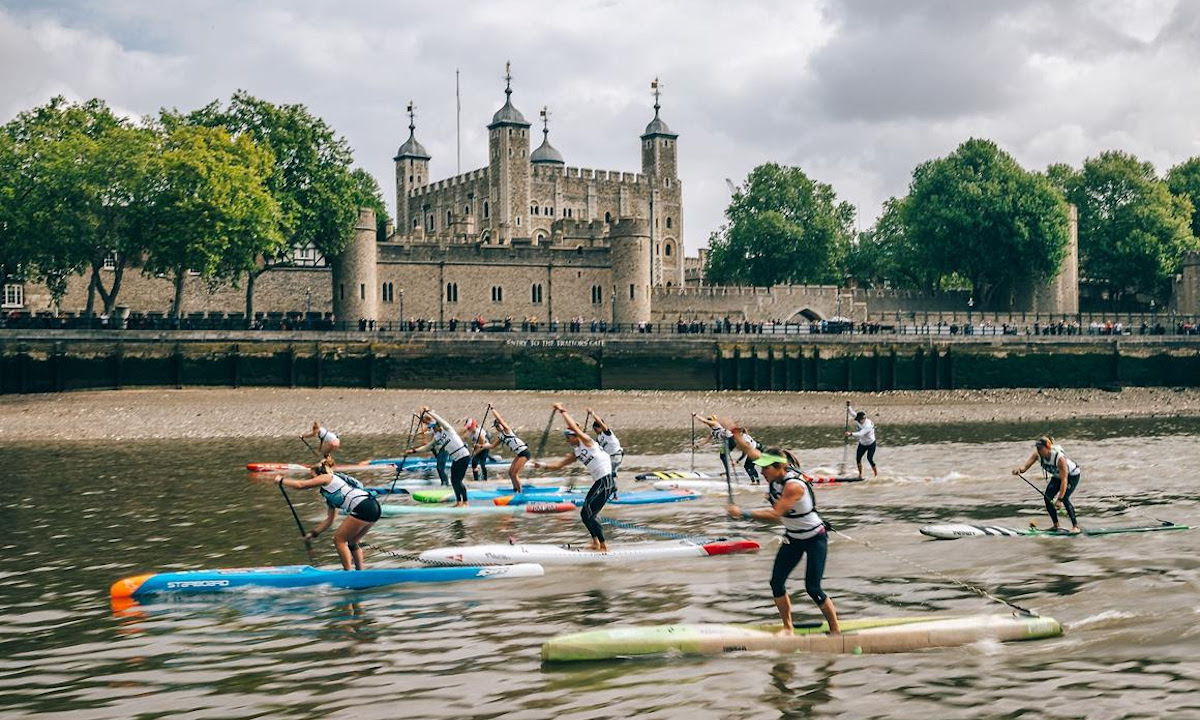 In a clear bid for dominance, both Seychelle Webster and Lina Augaitis came out roaring with amazing performances on the River Thames for the Pro Distance race and the 2019 London SUP Open.

At the starting gun, Fiona Wylde leapt out in front for the women, taking advantage of passing boat wake to put herself 20 yards in the lead. Augaitis quickly reeled her in and positioned herself at the top of the women's draft train setting a hard pace which would endure for the remainder of the course.

The lead ground, led by Lina, included other dominant forces of nature including Fiona Wylde, Candice Appleby, April Zilg, Annie Reickert and SIC Maui's Seychelle Webster. The women paddled down current along the Thames and streamed past Big Ben, Houses of Parliament, the London Eye and under Westminster Bridge in a fast pace that often ran at 8-minutes per mile.

"It was a fast race," reports Seychelle Webster. "We had the current pushing us along at a good clip. At the 10k mark I made a surge to try to take the lead, but Lina and Fiona would have none of it." 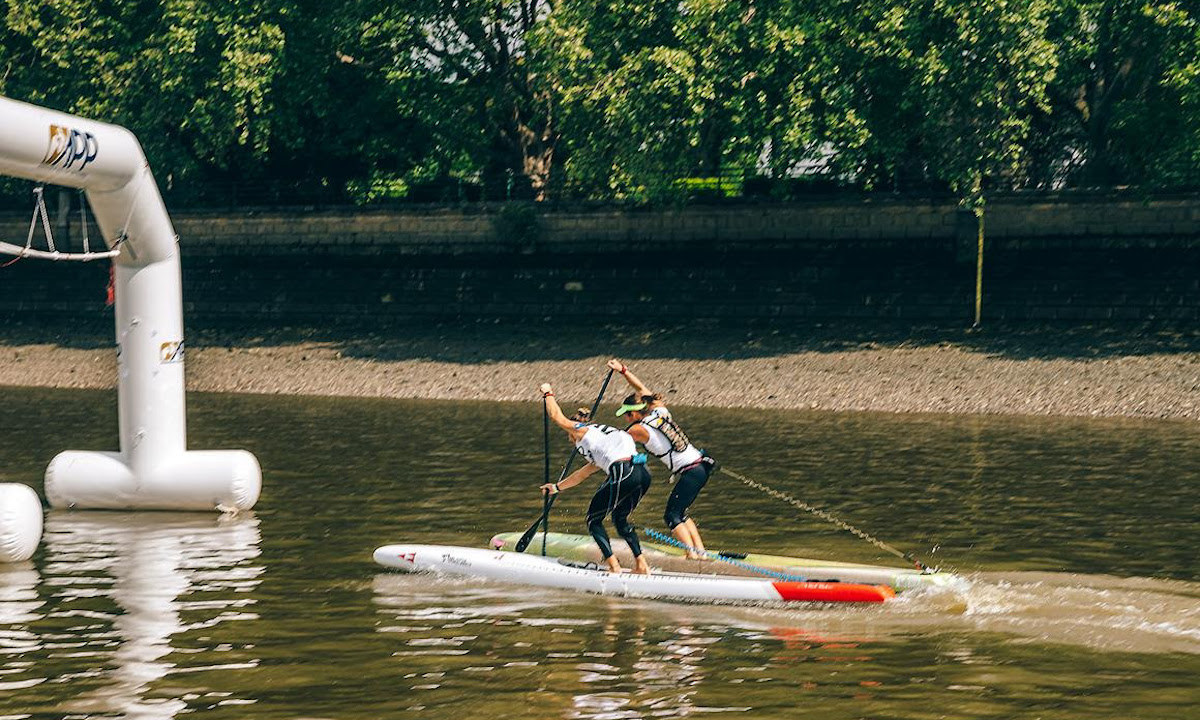 In those final yards, it boiled down to an all out sprint between Webster, Augaitis and Wylde driving, stroke for stroke, to cross beneath the finishing arch. After a photo finish review, Seychelle was awarded the win by less than half a second, Lina in second and Fiona Wylde in third.

It is refreshing to see Augaitis back in full form after taking a hiatus to raise her two children. Her unwavering athleticism, drive and commitment to both paddling style and force clearly puts her back on top of the leaderboard as we saw in her outstanding performance today. 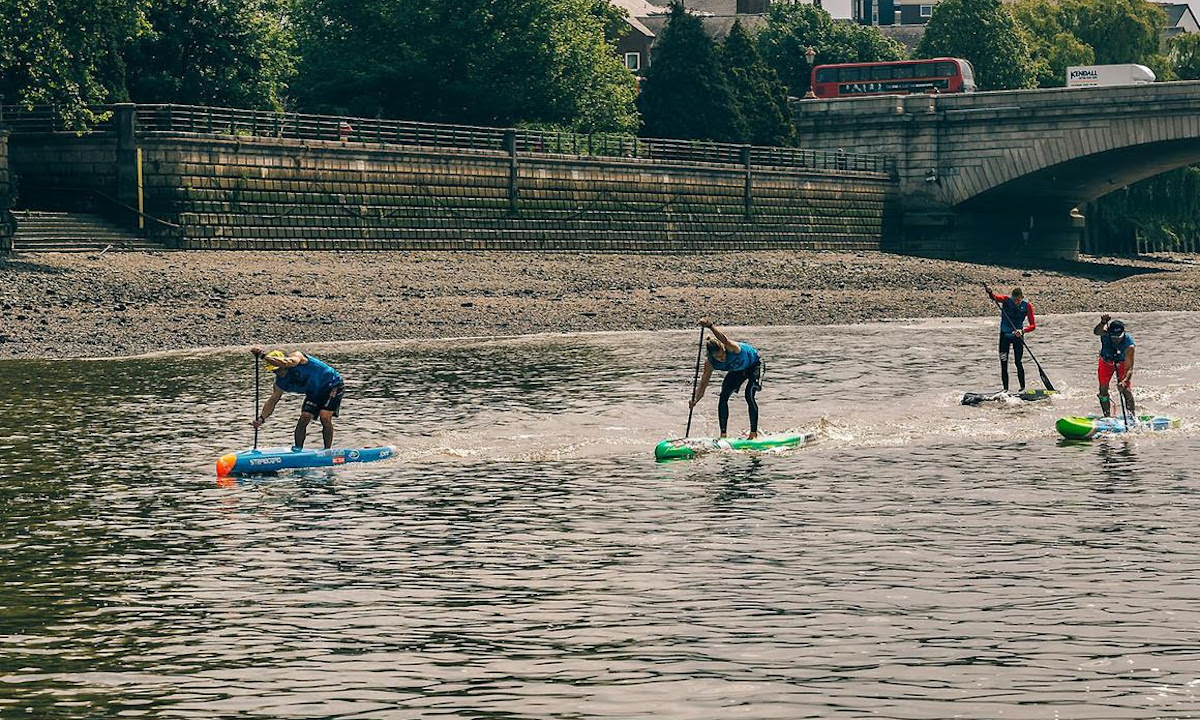 The Men's Distance Race along the Thames River was no less an unprecedented showcase of incredible talent and a field of pure competitive fire. In perhaps the most stacked lineup yet for the 2019 season, the APP World Tour solicited massive displays of performance in Titouan Puyo, Lincoln Dews, Michael Booth, Connor Baxter, the Hasulyo Brothers and returning APP World Champion, Arthur Arutkin.

"It was tight at the front the whole way," says Michael Booth. "And, it could’ve been anyone’s race. I tried my hand a few times at getting away, but to no avail and it came down to a sprint finish."

After Boothy and Bruno's battle at the Carolina Cup, spectators knew to look for a match up again between the two. At the starting gun, the pack surged out onto the historic waters in a wake-filled washy mix before settling into a draft train with Bruno Hasulyo up front, pulling Booth, Puyo, Dews along with the rest of the pack.

"I had to race differently to what I normally do," reports Booth, "I waited patiently and attacked just before the finish arch."

In those furious final seconds on the Men's Distance course, it was a passionate drive for the finish. In the end, Booth's massive power pulled him through the APP arches first, followed tightly by Lincoln Dews, Titouan Puyo, both Hasulyo brothers and Arthur Arutkin - mere tenths of a second separating the Top 5. 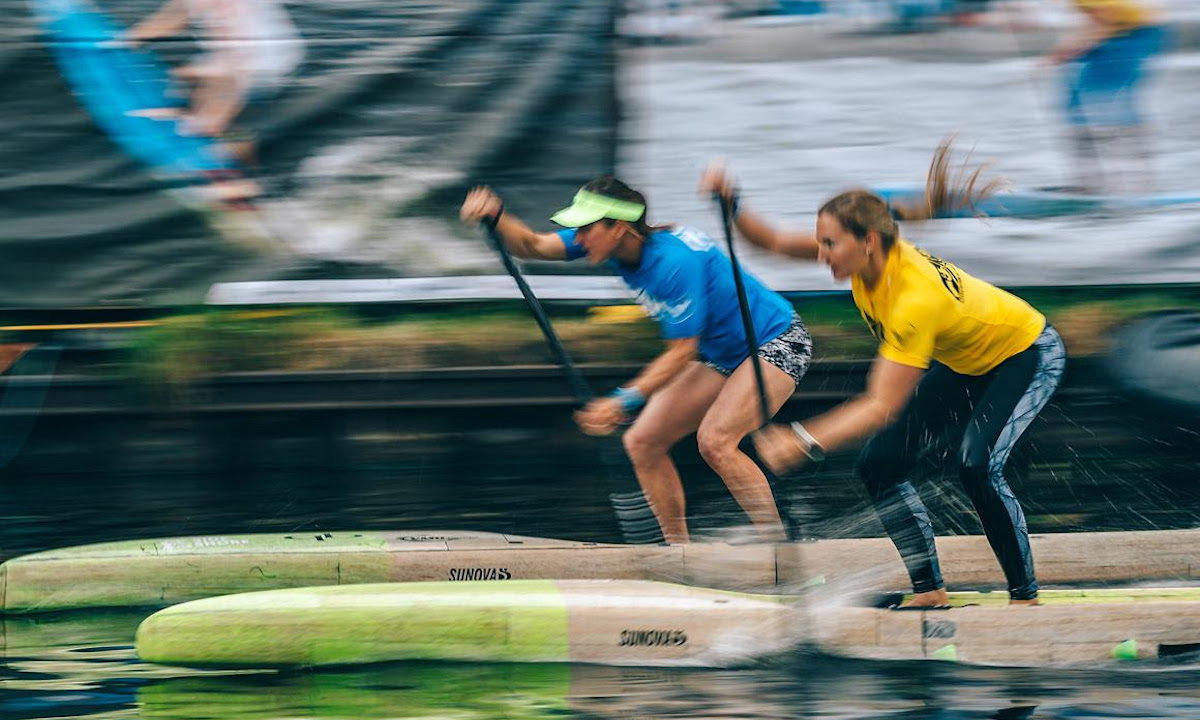 The APP World Tour's Sprint Race Elimination held at the Hackney Fitness Festival in London this past Sunday gave birth to a new generation of Championship Tour talent, as seasoned leaders gave way to new names on the APP World Tour in front of a roaring crowd.

The London SUP Open frontrunners consisted of many of the now expected big names, but also featured new talent and unexpected Champions in both the Distance and Sprint courses. Here's the wrap up:

Tristan Boxford, pushing the boundaries of the sport of stand up paddling to new heights and in fresh directions, is always looking for new dynamic formats that excite his racers and provide a fitting showcase of the sport, especially given the scale of the Hackney Festival of Fitness and sheer number of people in attendance. 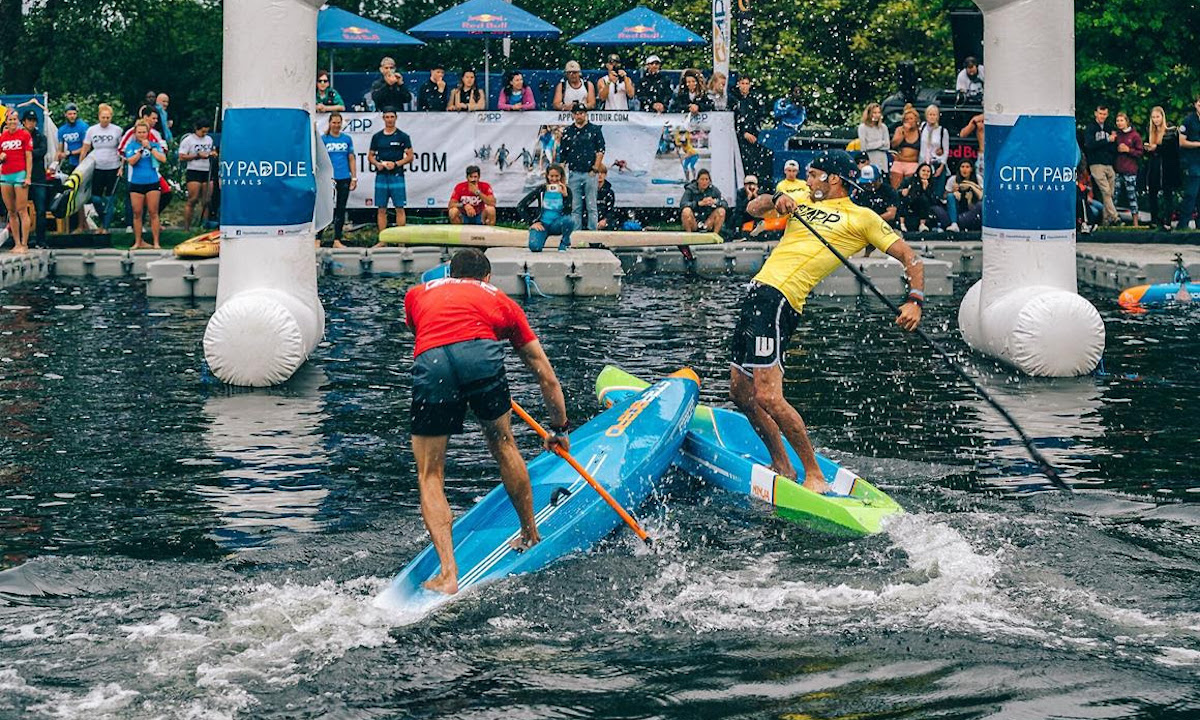 The Sprint Races at the Hackney Marshes as part of the London SUP Open were a reflection of that thinking. The APP team, together with Race Director Anthony Vela created a compact, tight, new course to thrill spectators and challenge world class athletes to perform at their best. Four man heats had racers moving in opposite directions from each other, rounding an outside buoy and back to cross in the middle of the arena in front of the crowd, before heading for the far buoy on the opposite side of the course before sprinting to the final turn and through the APP arch.

The action was kept in full view of the spectator platform and held the energy high and the action electric. As the day built, so did the heats as times logged, as athletes challenged each other on this new course which required tight buoy turns, quick thinking and a final sprint to the finish. 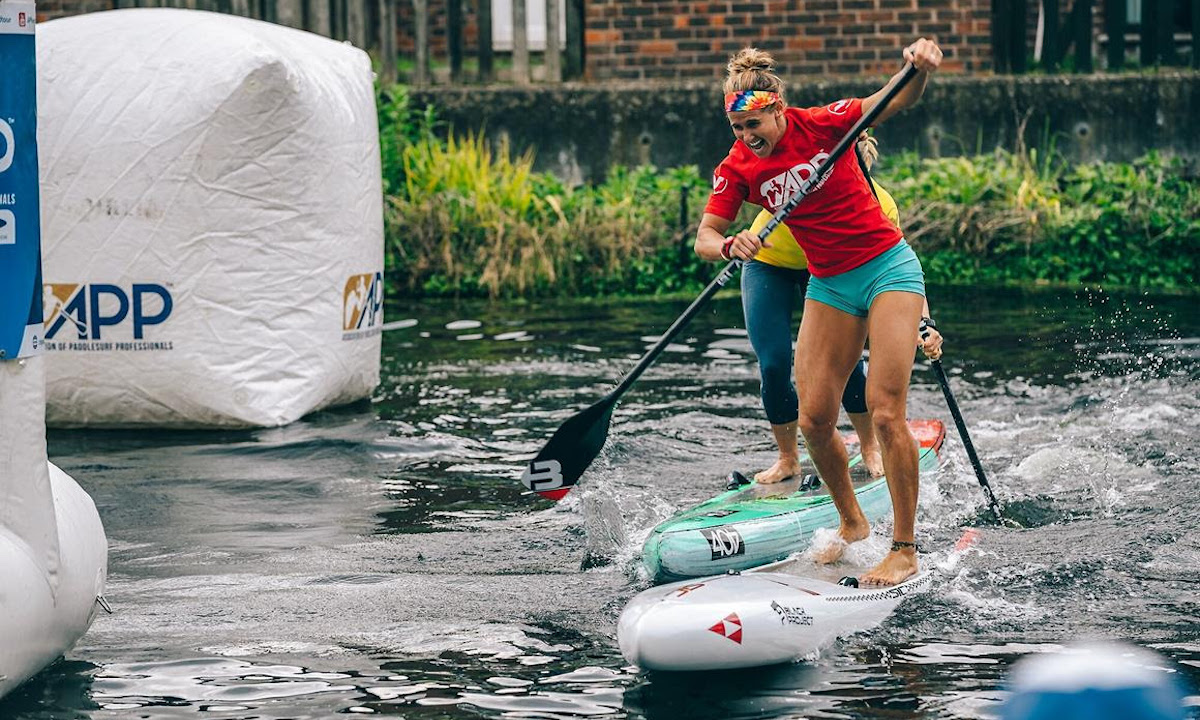 Seychelle in all her fierce-ness. | Photo courtesy: APP World Tour

On the Women's side of the Sprint races, the competition showcased a powerhouse of new talent mixed with veteran contenders to create a fresh feel and exciting podium line up. In the early heats, Lina Augaitis found her rhythm, reminding the field that with her 2nd place finish the day before on the distance course, she would be a major contender for the overall win.

April Zilg also made her presence felt with excellent tactical sprint racing. April calmly disposed of her opponents advancing through the heats. Meanwhile, Fiona Wylde, Candice Appleby, Amandine Chazot and Distance winner Seychelle Webster all came together for a powerful display of talent.

It soon became apparent the battle would be between Webster, Appleby, Chazot and Zilg as each woman forced their opponents to work harder in order to stay in the elimination rounds. First Augaitis went down, followed by Wylde. All of a sudden, we had a host of new potential Champions in the process.

In the final round, the women's capacity to generate excitement was palpably felt as Webster and Zilg crossed the middle of the course in front of the stands, paddles blurred in furious movement. Seychelle Webster let out a yell when she came through the gates for a first place finish, April Zilg happily took second, Candice Appleby - a former World Champ - in 3rd and Amandine Chazot from France in fourth. 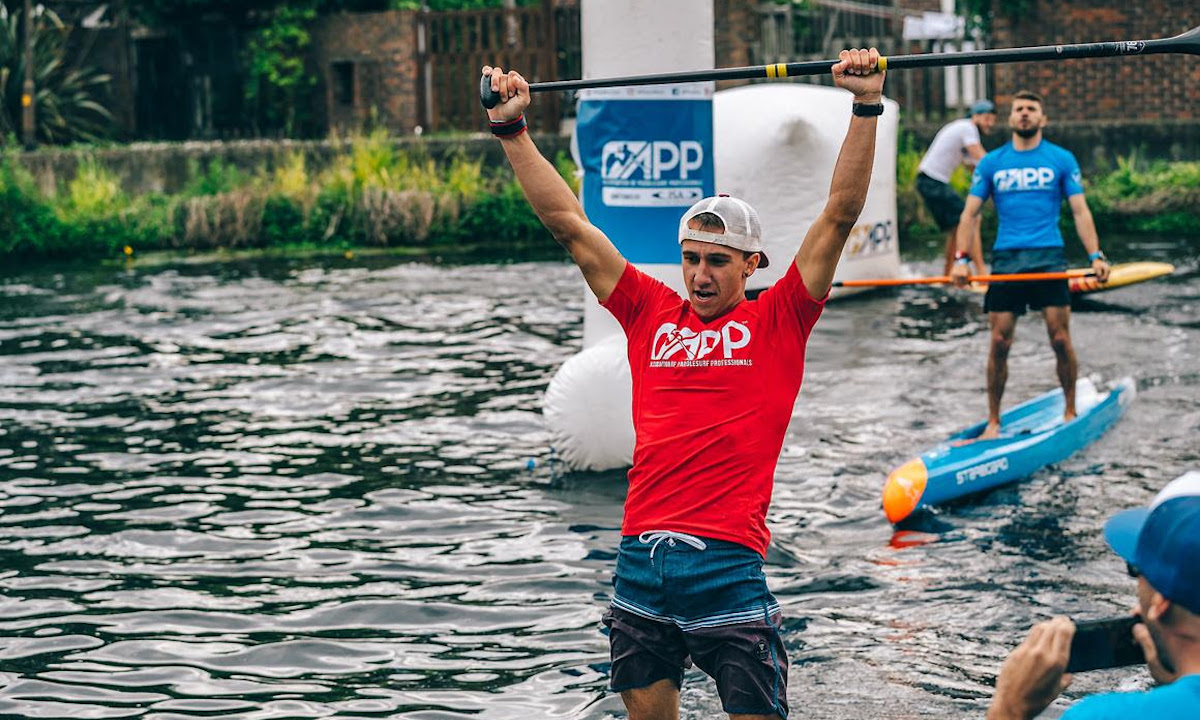 As APP racers settled in to the new racing format, a whole new show began. Casper Steinfath, absent from the distance course the day before due to Tenosynovitis, led the charge in posting heat times and pushing the World's best to perform. Both Nika brothers, Claudio and Leonard, drove the competition to new heights as their ferocity under pressure put competitors on red alert. Meanwhile, Titouan Puyo and Bruno Hasulyo both made their presence felt with powerful, consistent performances.

The true hero of the Sprints: 17-year-old Noic Garoiud from New Caledonia, made a mark for himself on this final day of action. Moving past notable athletes like Connor Baxter, Itzel Delgado and Arthur Arutkin, Garioud electrified the competition with his heat times and blazing paddle techniques drawing powerful responses from the galley, fellow athletes and spectators alike.

In the Final Round, it was Garioud, Steinfath, Claudio Nika and Titouan Puyo, a powerhouse of performance and talent. The young New Caledonian racer Garioud never looked up from the start, but burned through the course with such speed that the crowd came to its feet to cheer him in. His presence and performance this weekend established him as a new up and coming contender on the APP World Tour as Garioud arrived on the world's stage with a bang to claim the APP World Tour Sprint Championships at the London SUP Open against some of the greatest racers of all time. 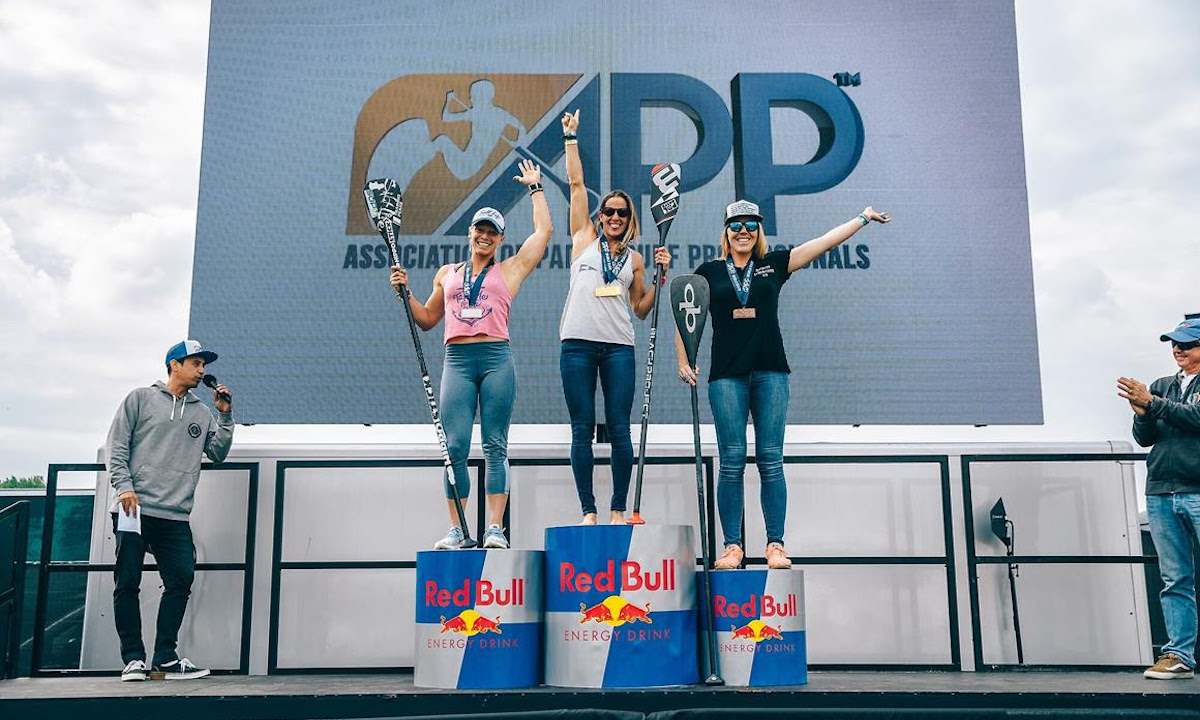 After a weekend of spectacular racing in the great city of London including the historic distance race on the Thames River and sprint racing at the Hackney Marshes as part of the Hackney Fitness Festival, the APP World Tour crowned their first champions of 2019 at the London SUP Open.

For the men, with combined points of 14,000 from his weekend performance, young Noic Garioud took 1st place in the Overall standings taking home a $6,000 paycheck together with his APP 'Game of Thrones' / Medieval helmet-trophy and a fleece-lined changing robe by Dry Robe. Michael Booth, who won the Distance course on the Thames on Saturday, which combined with his Sprint performance, wrapped up the weekend with 13,000 points for a 2nd place finish Overall. Titouan Puyo put on an impressive first performance on the APP World Tour, with a 3rd place in the Distance and 4th place in the sprints giving him a combined point score of 12,250 and 3rd place overall for the event.

In an upset of the usual guard (except for Candice Appleby) and as brand new APP World Tour athletes, Seychelle Webster and April Zilg dominated the Sprint races to secure their spots at the top of the leaderboard for the overall result at this year's London SUP Open. Hanging tough with the new World Tour competitors was veteran and World Champ herself, Candice Appleby. Here is how it ended up:

Seychelle took double wins here at the London SUP Open to award her a dominating 20,000 points going into the next event. April Zilg's strong performance in both sprint and distance combined give her 13,000 points moving into New York for the next stop on the Tour. Candice Appleby's strength and competitor status keeps her firmly on the podium with an overall score of 12,250 behind Zilg. It's going to be a great year of racing ahead!

Make sure to go to www.appworldtour.com and @appworldtour for highlights, replays and photos from all the action from the London SUP Open this past weekend and join us at the end of August for the next stop on the 2019 APP World Tour in New York. 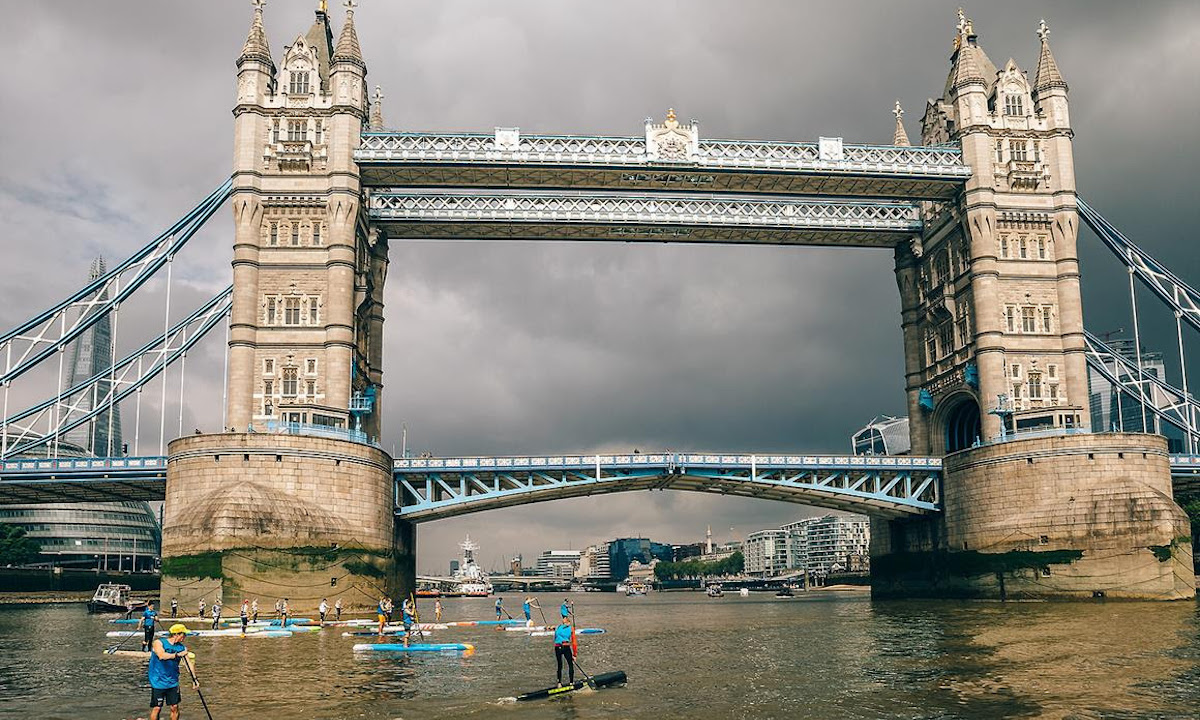