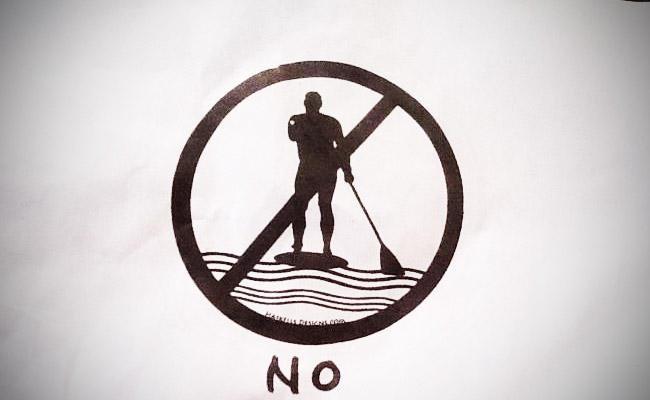 The sign posted at the SUP Shack in Santa Cruz, California (above). Courtesy: Santa Cruz local.

SANTA CRUZ, California – SUP Shack, a paddleboarding shop in Santa Cruz, California, had an anti-paddleboarding sign posted on its doors, revealing how some still see the sport as problematic. The harbor master has already been notified of this incident. But without knowing who or why such a sign was even created, one is left with pure speculation. And if prior incidents are any reference as to the motives behind this sign, then we might know a thing or two.

In the early days of stand up paddle boarding, or at least when the sport had just begun to grow exponentially in the mid 2000's, surfers became increasingly antagonistic toward the sport, arguing that stand up paddlers posed a threat to others in the water and also had an unfair advantage catching waves, among other things. As the sport continued to grow and people started realizing that it was here to stay, acceptance, even among surfers, began to rise and the animosity appeared to begin subsidizing. This incident, however, rekindles much of the tention of the early days but hopefully is not representative of the overall acceptance of the sport among the larger surf community.

More in this category: « Anthony Vela's Notes From The All Stars Grand Slam Are Rules & Regulations Making it Difficult to SUP? »