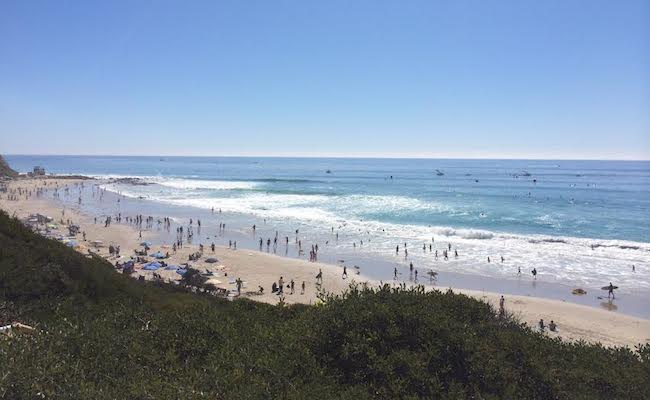 DANA POINT, California - The 2014 Battle of the Paddle, a.k.a the biggest standup paddle racing event of the year, happened over the weekend and it was nothing short of amazing. There was excitement, heartbreaks, board-breakage, and more as mother nature provided the event with amazing weather.

It was hot. Really hot. Although absolutely beautiful and perfect, the sun showed up and provided Salt Creek with temps in the 90s, which, made hydration and sunscreen all the more important. It was packed down on the beach as spectators watched the world’s best SUP race athletes paddle their hearts out to win the most prestigious event of the year. The waves were on fire with sets coming in at head high to a few feet overhead. The waves made it a particularly exciting event to watch as a spectator but definitely made things difficult as a competitor. Most of the kids races were cancelled due to the dangerous conditions of the surf leaving dreams shattered as the kids were so excited to be a part of this event. 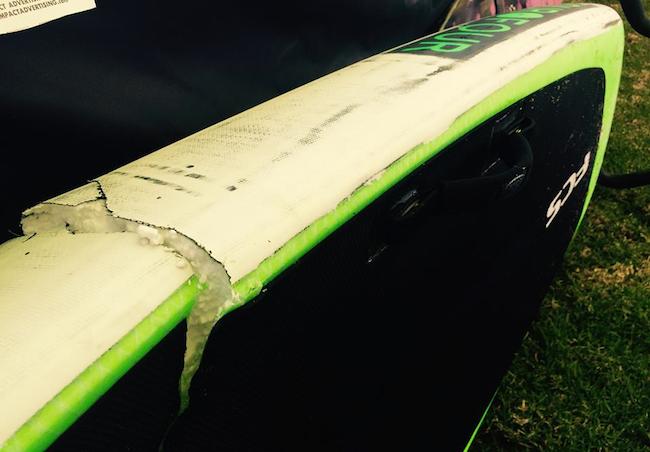 Danny Ching's board snapped in half in the first heat of the men's qualifiers.

In heat one of the men’s qualifiers, Danny Ching (FCS SUP) had a pretty lengthy lead over the rest of the field and on his way out from completing his first lap, he snapped his board in half trying to get through a breaking wave, causing him to lose his lead. Danny got on a backup board and ended up gaining back some momentum to get him 3rd place in the qualifying heat.

For the women’s, there were no qualifying heats, just one straight final. The women were off to a rough start as the biggest set of the day came in just as the horn blew for them to start. This set made it extremely difficult for the women to get through and there were definitely some struggles getting out to the first buoy. In this race final, there was more excitement than opening gifts up on Christmas morning. With lead changes happening every time a new lap was completed, spectators were glued to the sand watching as the race unfolded.

Candice Appleby (Ocean Minded), Annabel Anderson (Starboard) and Lina Augaitis were the women who stood out as they all battled for the top spot. On the last lap heading back out, Annabel made a critical mistake and fell off her board in the oncoming surf which gave Candice the opportunity to gain a small lead over Annabel and Lina, who was also not far behind. Candice showed no signs of exhaustion as she paddled her heart out to keep her lead. 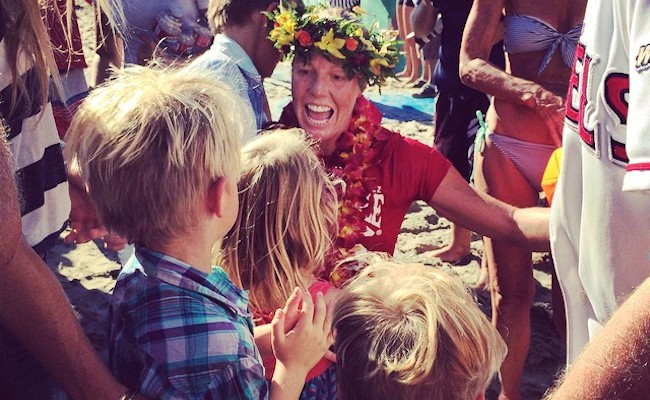 In the end, Annabel was just a few board lengths behind Candice when Candice was able to catch a small wave into the shore to snatch the 2014 Battle of the Paddle title. Due to an error in a buoy turn, Annabel was penalized by one minute, which in turn qualified Lina to take the 2nd place spot. This win for Candice was huge as this made for her 5th BoP title and was a great comeback from her hand injury that made her sit out last year.

The men’s final was dramatic to say the least. With a relatively easy start, the men showed their fire and strength as they battled it out to the first buoy. The usuals for the men were ahead of the pack battling it out for the lead. On the way in from their first lap, a massive set came in creating an awesome show for the spectators as we saw tons of racers on each wave.

When starting to go back out, the men had somewhat of a difficult time getting through the sets and the top ten men got a huge lead over the rest of the pack for the remainder of the race. Danny Ching held the lead for part of the race when out from the middle of the pack Kai Lenny (Naish) came pushing forward past him and the rest of the pack. When it was all said and done, Kai Lenny got ahead of the bunch and paddled for his life as he knew he was not too far out in front. Kai ran up the beach and claimed his 2nd BoP win in a row. He was closely followed by Aussie Jake Jenson who came in second and Danny Ching who came in third.

Kai Lenny, psyching on his back-to-back wins at the BoP.

On Sunday’s distance races, it was SIC’s Lina Augaitis who came out on top defeating defending champ Annabel Anderson and Fiona Wylde (Werner Paddles) who came in third. It was awesome to see the women pushing the limits of the sport and doing so well! For the men’s distance, it was the machine, Danny Ching who came back with a vengeance to win the race this year. He came out on top over Travis Grant and Beau Obrian who came in third. 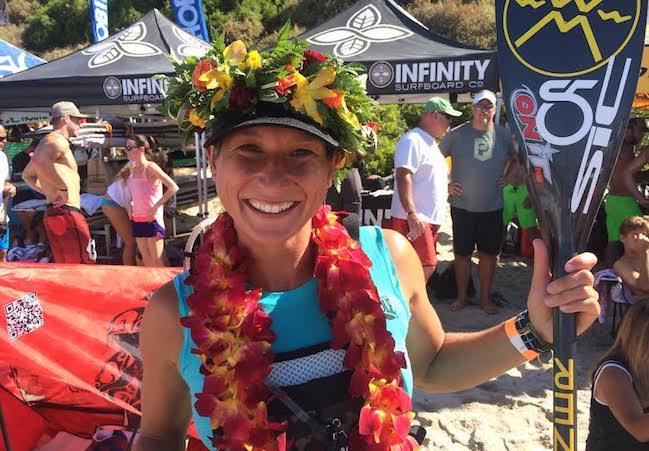 It was an awesome year this year at the Battle of the Paddle and it was an exciting weekend. It was definitely a weekend which required skill, but a lot of it was due to luck. As a competitor, you hoped to have a lull when paddling out and a set when on your way in. These factors definitely made for an interesting weekend with tons of excitement that will be hard to top. If you were down at the BoP this year, tell us your thoughts on the event!

Congrats to Candice, Kai, Lina, Travis and all the brave competitors who toughed it out in the beautiful, yet tough conditions of the weekend!