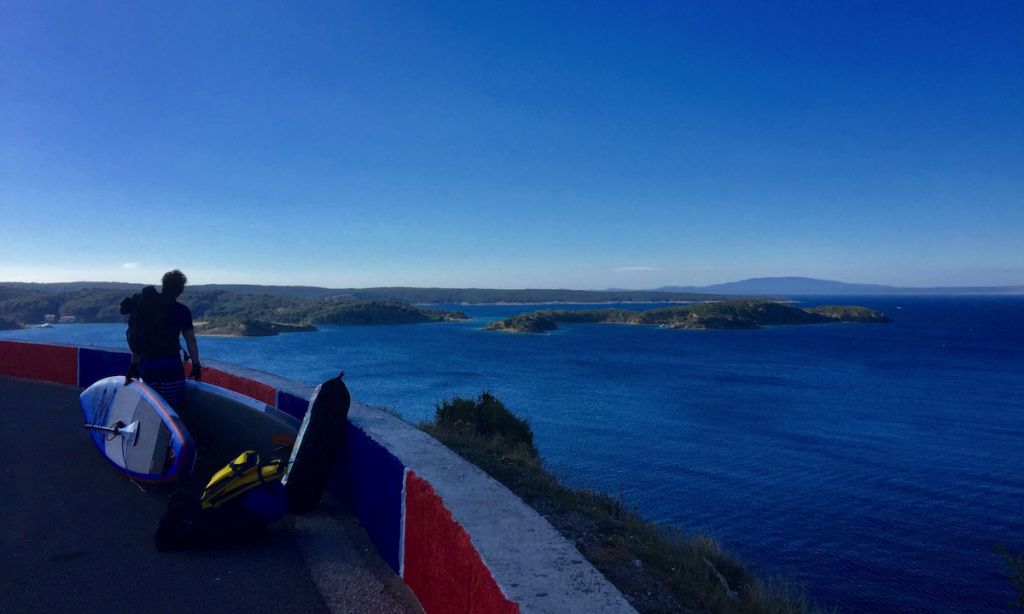 RIJEKA, Croatia - The marvelous Croatia coast with over a thousand islands could as well be one of the hottest pins lately added to the world's top holiday destinations map. But for me, Croatia has always been a synonym for a memorable summer holiday. When I was a kid we used to explore it stone by stone, summer after summer, with my family (Slovenia is a neighboring country to Croatia, both were parts of an ex republic of Yugoslavia). Since then, for more than 30 years, I have been taking every opportunity to visit this enchanted place - for the soul food, inspiration, recreation or family vacation. And it looks like another such moment is on the horizon.

As a SUP guide I usually spend the end of the SUP season in the search of new paddling destinations. This year I had a few on my list, from Italian Lakes to Greece. It was then when I got a call from a good friend of mine craving for a break from a hectic work schedule: "Just a few days to disconnect, man…" I knew right away where we were heading.

The trip that I have had planned out for a while - a 100 km paddle along the most northern of Croatia's islands seemed like a perfect remedy. The weather forecast looked promising. A 4-day window of sunny skies, calm seas and almost no wind looked like just enough time to make it. We were in, five days later riding the 5 AM bus from Ljubljana (Slovenia) to Rijeka (Croatia) where our adventure began. 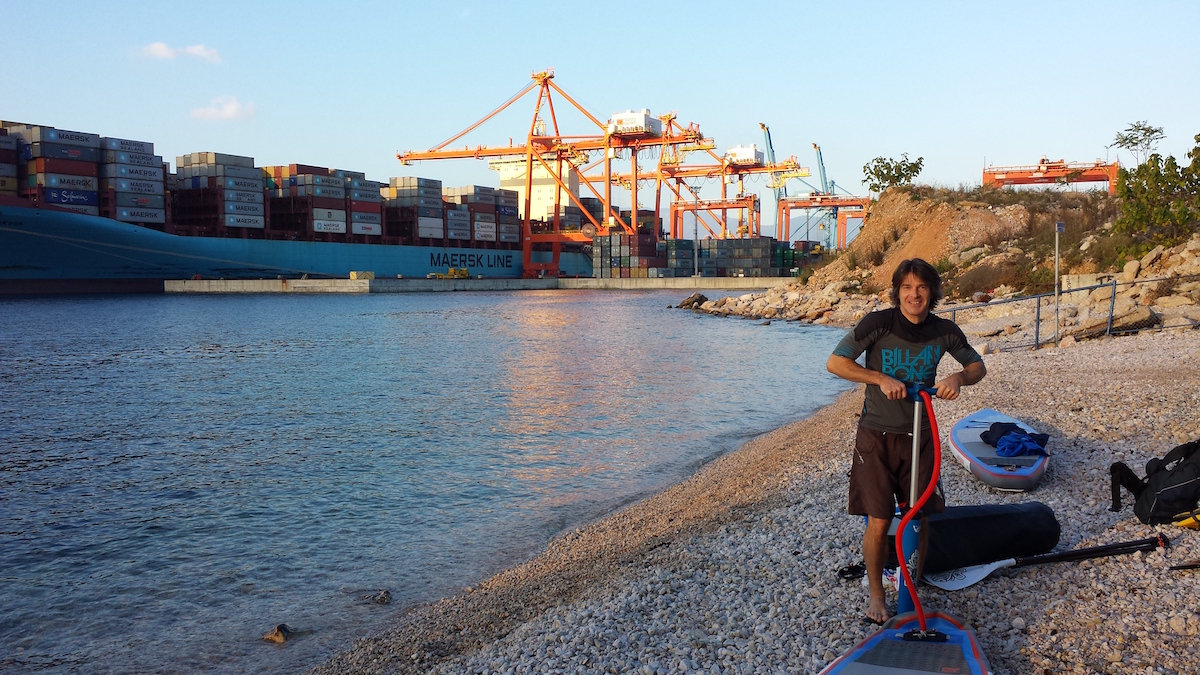 All you can paddle

The night was still dark blue as we unloaded our gear at the Rijeka harbour, so we could hardly tell the sea from the sky. But we could definitely taste the sharp scent of salty air filling our lungs with excitement. This trip was to be something new for both of us. I've paddled this area before on our SUP & Sail tours but cruising from island to island by a sailboat and comfortably paddling in between was a different scenario. Now we were about to paddle the whole route on our own - no boats with margaritas on deck, just two guys with paddles and a couple of dry bags with the necessary gear to survive for four days. So, there we were. Two of us with a plan - to disconnect, loose a few pounds of stress, explore new places and have a good time. But first, coffee! A quick macchiato at the corner of the local market and we were ready to go. 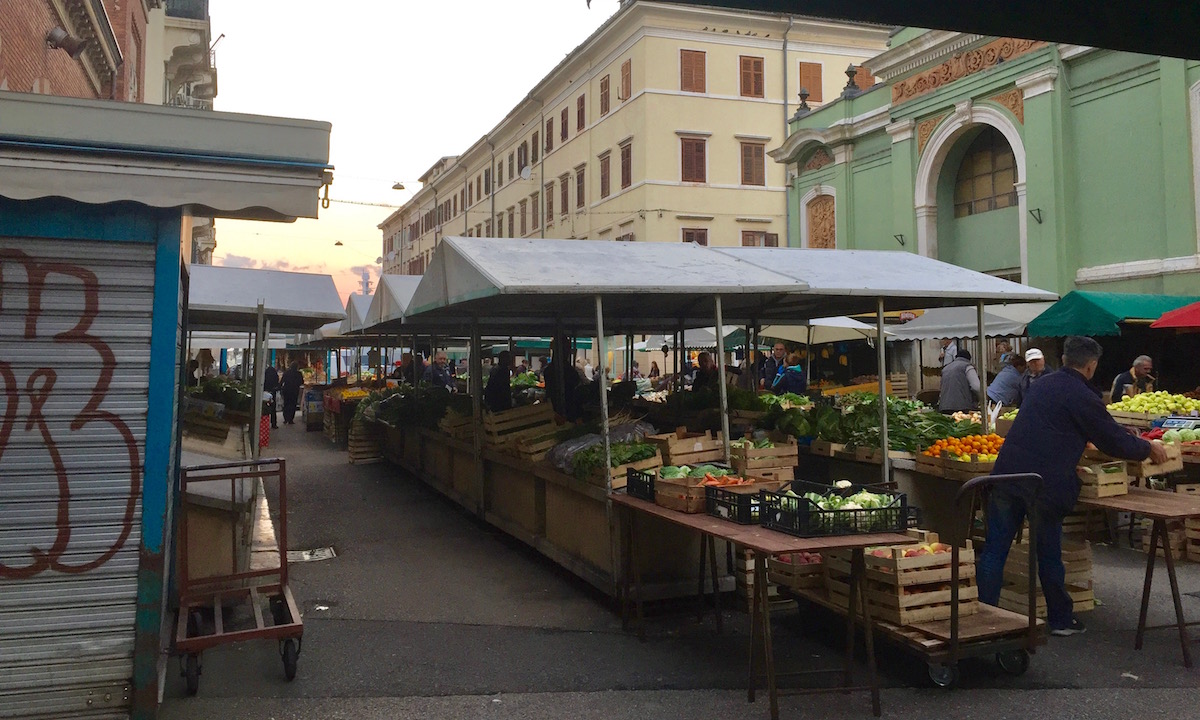 We set to paddle a 100-km route in four days, starting at the port of Rijeka, descending south along the islands of Krk and Rab, passing a few smaller islands on the way. The average distance of 25 km per day was a rough guide for planning water and food refills as well as overnight spots on the route. An adjustable backup plan was also well thought over. The good thing about larger Croatian islands is that they are connected to land or to each other by ferries so choosing the alternative route or a quick return home is always possible. 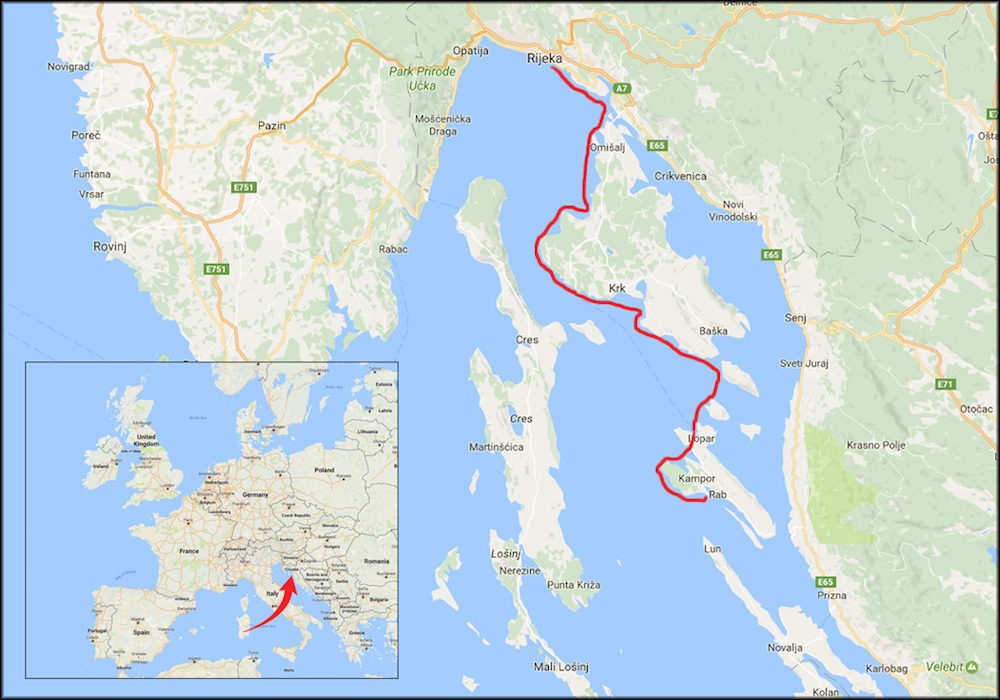 Downwinder for the start

Our trip kickstarted with a windy surprise. As soon as we got on the water we were challenged with around 15 knots of off-shore bora wind (a gusty wind pouring down from the Velebit ridge that rises high above the coast and extends all the way to central Dalmatia). Luckily, most of the time we could paddle in the shelter of the cliffs preventing the wind from blowing us off shore. However, on a few open stretches we had no choice but fight the bora by paddling the entire time on one side which turned out to be quite an exhausting warm up. 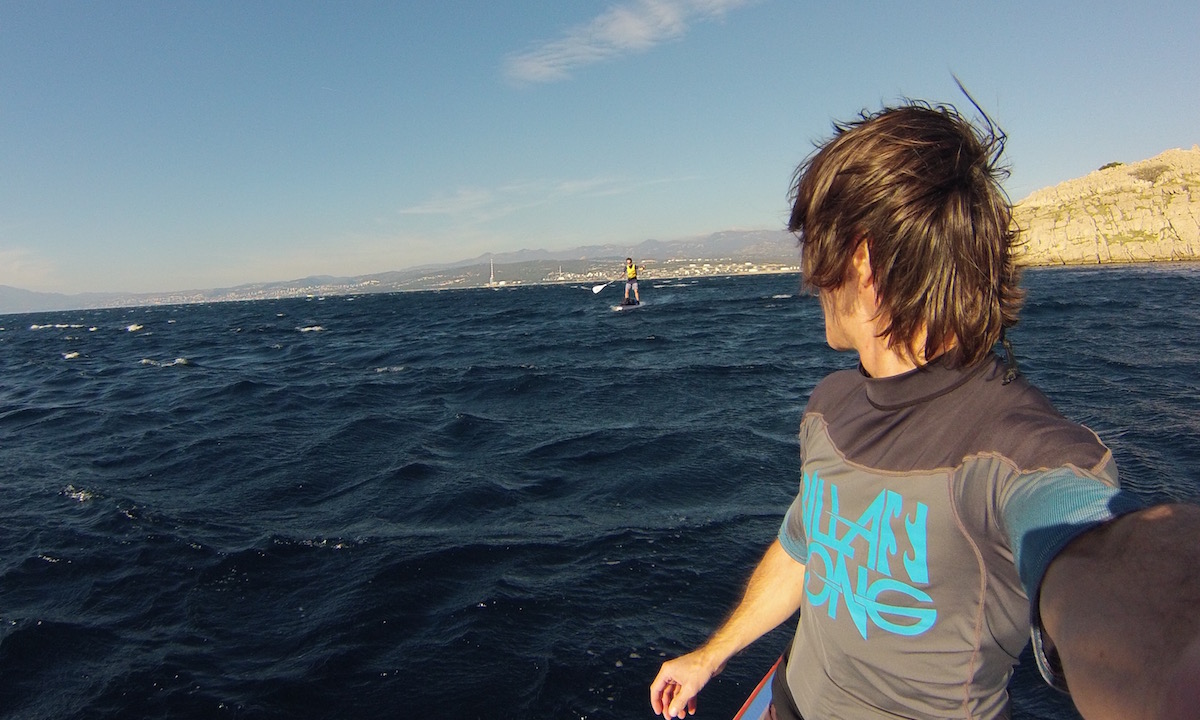 After about three hours of struggling with side wind we finally reached the point of the crossing to the island of Krk. That's where our route turned in the direction of the wind and where the fun began. The further we were from the shore the stronger the wind in our tails. Soon we were riding in 20 knots with well over a half-meter swell. That may not sound like much but with the boards loaded with dry bags it took us a while to adapt to the conditions. For the following two hours we enjoyed a perfect downwinder along the northern coast of the island. Riding with the speed of about 10 km per hour we compensated for all the lost time from the morning paddle. Day one plan accomplished. A portion of spaghetti topped with a magnificent sunset and we dropped into our sleeping bags.

The sound of waves splashing into the rocks and spraying the water over our faces was by far the best ringtone I've ever had for the morning alarm! Time to get up and ready for work. Another 25 km awaited us! The sea was calm and the sunny skies promised a perfect day. 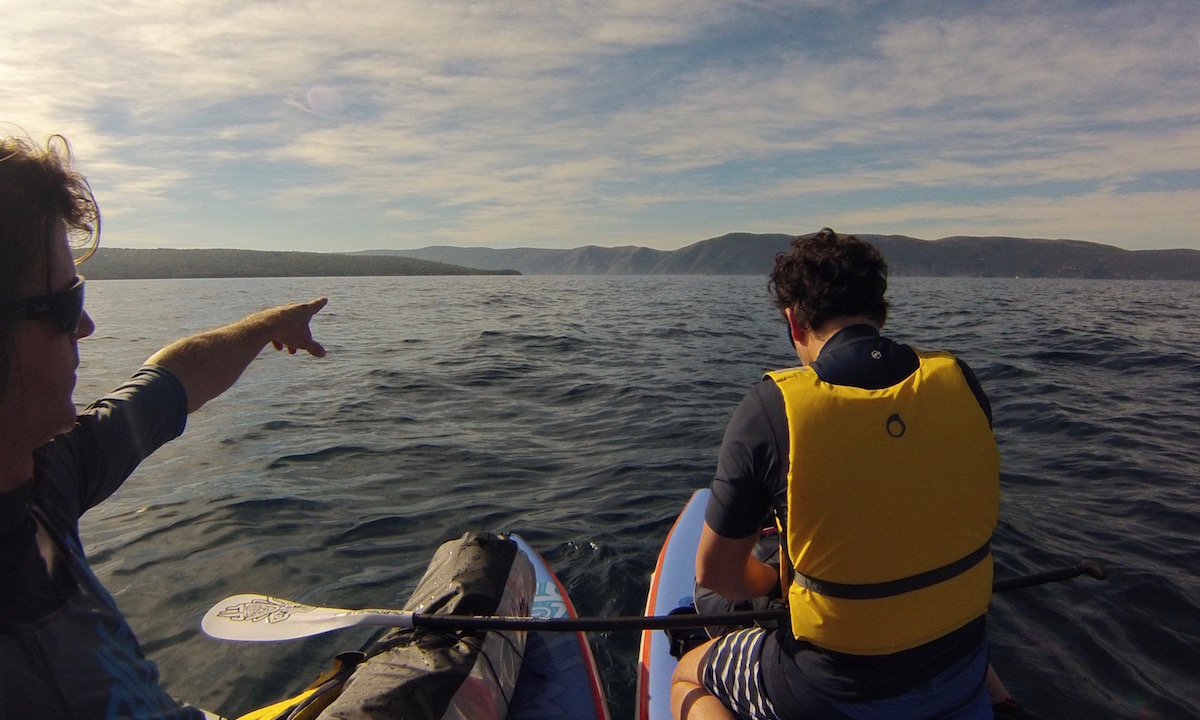 The serenity was filling the air. It didn't take us long to realize that we were the only ones out there. No boat traffic, no noises from the beach, just soft sounds of our paddles slicing evenly through the water. We kept silent not to spoil the tranquility and just paddled on…

Once again, the off-season proved to be the best time for visiting these places. Pampering sound of the sea and fascinating landscapes providing the ideal conditions to disconnect, relax and recharge. In countless green lagoons and small private bays anyone could find their cure. 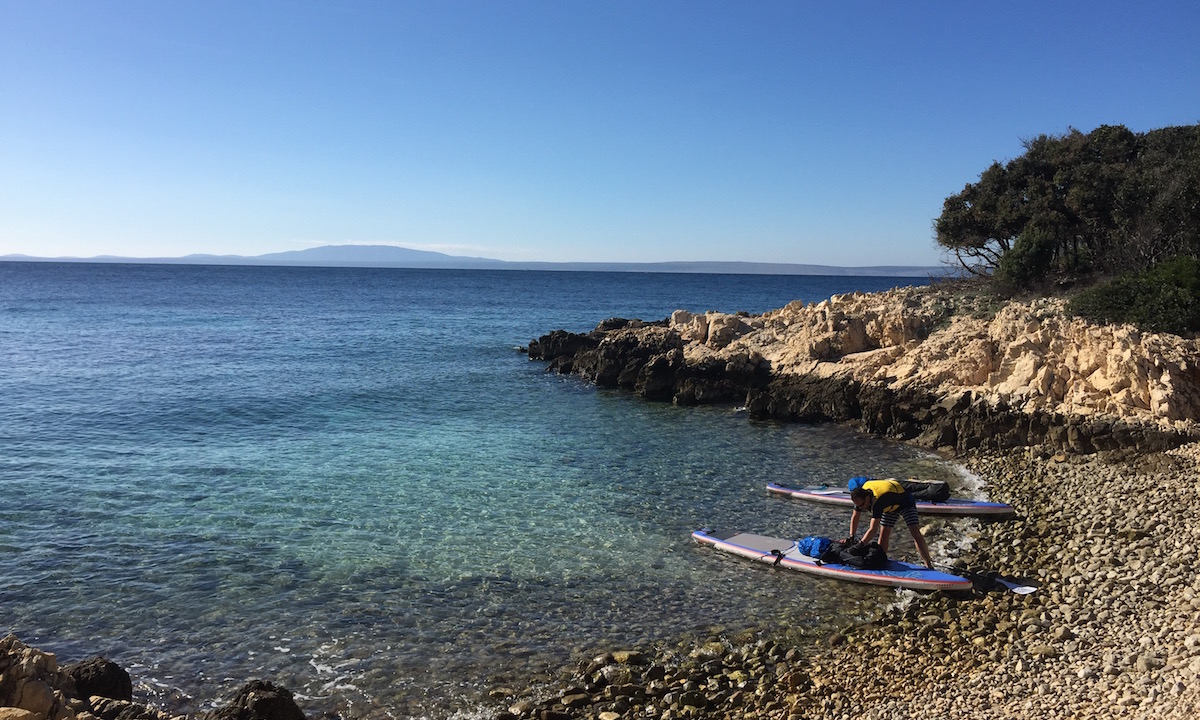 In the last two days we rested our eyes on the green macchia-painted shores but now we were discovering the other face of the scenery. Rough, stony landscapes, bold and desolate with no evidence of life but some lonely patches of grass or sage every here and there. The area we were paddling through was one of the many along the Croatia's coast where winds from the mainland constantly blow away the soil and leave the whole islands or parts of them completely bare. This contrasting duality of green slopes and wind-washed landscapes has become a trademark of Kvarner and northern Dalmatia regions.

Along the Krk island towards the Prvic island in the distance | Photos: Marko Senegacnik

Nevertheless, paddling among stony sleeping beasts was an impressive experience and this day we even got lucky to share our fascination with a group of Slovenian sea-kayakers on their way around the island of Krk. The only people we met on the water that day.

After a few days on the water we had learned that the "steady" mild-wind forecast from a few days ago was not to be trusted. This was confirmed again on the last day of our trip with still 30 km to go to reach our final destination, the town of Rab. We got up early and a quick glance at Lopar bay promised a calm day. But in the distance, in the direction of our route, we could already spot the waves turning white - the sign of a strong wind. After checking a couple of wind-prediction models and considering the options we decided that paddling about 1.5 km out to the open sea with a strong side wind would be too risky, or at least too tiring. 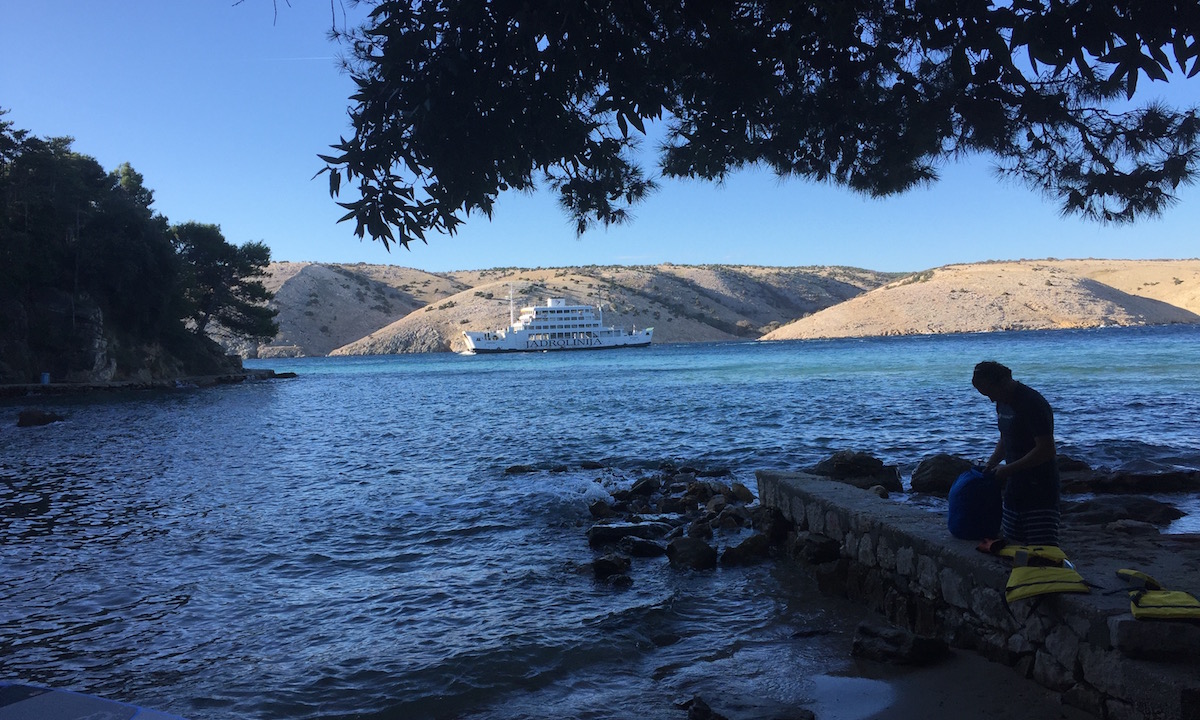 Waking up in the Lopar bay, Rab island, morning ferry in the distance | Photo: Marko Senegacnik

So, we set for a plan B. Instead of paddling out and around the cape we decided to make a land crossing to the next bay where we would get back on the water in less windy conditions. We hit the road, boards in our hands, bags on our backs. And again, what seemed like a 4 km road on a map turned out to be a 6 km up- and down-hill land paddling crusade. By the time we reached the bay we were exhausted. But we agreed - choosing the safer way was a good decision. And we caught some splendid views from the curvy panoramic road, which also counts. 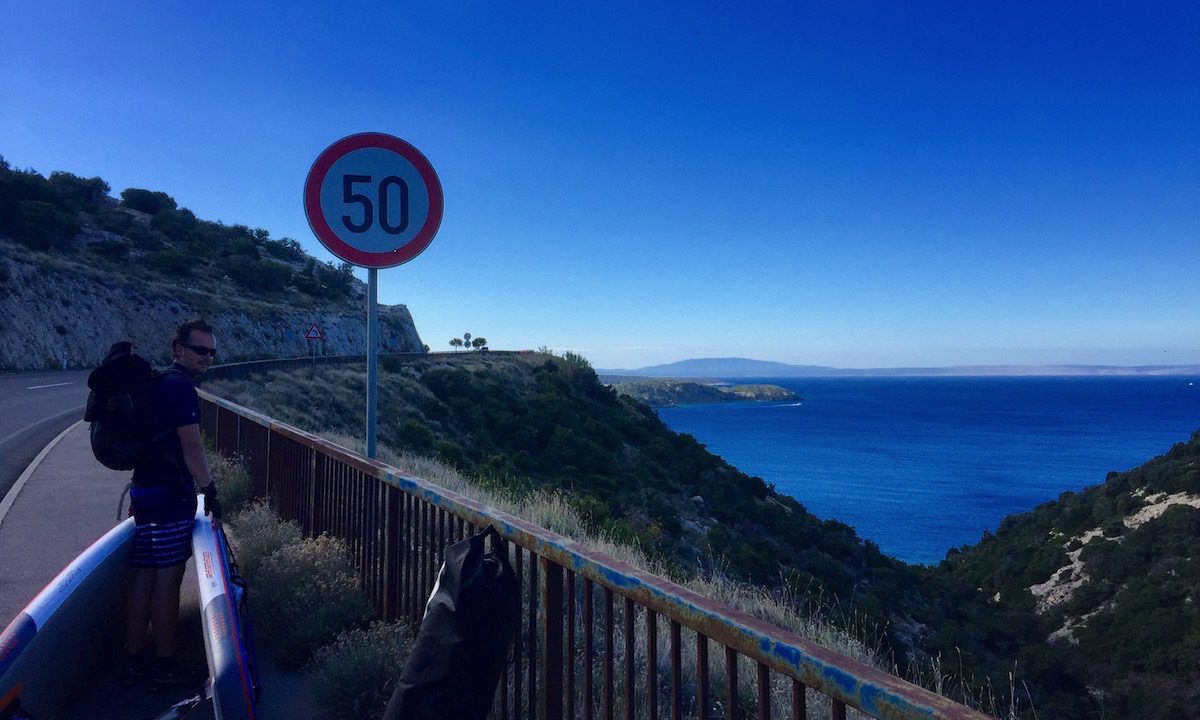 The wind soon died out, leaving us with meter-high side waves, what a day! During this short trip we experienced so many different conditions, and it looked like there were even more to come. As we reached the western side of the island we were greeted with a smooth swell in our tail and a friendly breeze helping us progress faster towards our final destination.

After a few hours of epic paddling through green lagoons we reached the town of Rab, just before the sunset. The impressive city walls rising before us as ancient guardians reminded us of a town's vibrant history during the times of the Roman Empire and made us reflect on our intentions. No worries, we come in peace for a moment of ancient beauty and macchiato, of course! Our aim was to outdo ourselves and we succeeded.

See you next year

Waiting for the ferry to take us home we had time to reflect back on our adventure. Four days of paddling for 5-6 hours a day in all conditions you could imagine! We were physically tired but feeling uplifted at the same time. Countless impressions still rushing through our heads, we agreed this was the perfect log-out. No doubt, it was worth the effort. Next year we head on from where we finished. Further south along Dalmatia's coast, to explore the next set of more than a thousand Croatia's islands. If you would like to join us contact me at [email protected] This trip was primarily meant as a getaway from a daily routine. Therefore, we didn't bother to document it from all the angles, as this would spoil the experience. However, we did capture some memorable moments on camera and shared them in a blog on Sup Slovenia Discovery web page.

Marko Senegačnik is a sup guide and co-founder of Sup Slovenia Discovery, a sup-tour company, specializing in tours and trips in Slovenia, Croatia and Venice.

Website: https://sup-slovenia-discovery.com/ Email This email address is being protected from spambots. You need JavaScript enabled to view it.

More in this category: « Chicama, Peru: A SUP Surfer’s Dream Create The Adventure of A Lifetime »