From calm bays with metropolitan backdrops to tide-swollen rivers with surfable waves, the waterways surrounding the jewel of the Pacific Northwest offer something for every level of stand up paddler. 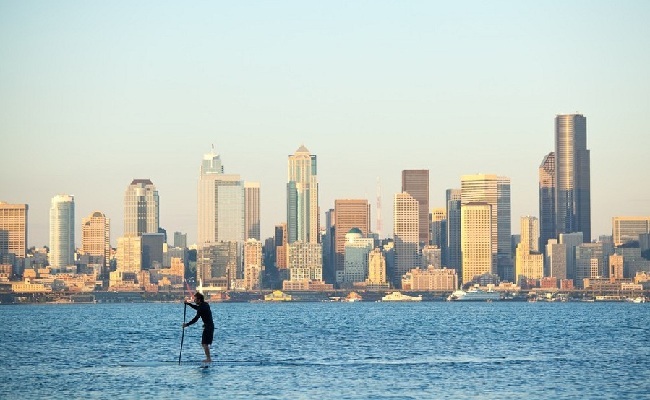 A stand up paddler glides across Elliott Bay with the Seattle skyline as backdrop. Photo credit: Rob Casey

Locals joke that the Puget Sound region has two seasons - winter and summer. The area is known for both its grey skies and rain. But it's the grey skies which are mostly prominent and drives many residents nuts, particularly in late spring when it feels like it will never change. Northwest'ies are senstive to their weather and usually only venture out on sunny days, thus leaving the waterways empty of other paddlers and boaters throughout much of the year.

Autumn is usually sunny and warm in early October, slowly leading to crisp cold air later in the month announcing the coming of winter. Average temperatures range from 60F to 45F. Most paddlers disappear around late September.

Summer traditionally starts after July 4th in Seattle. Temps can get up to 90F for a few days ending the cycle with a thunderstorm. Water temps rise to a balmy 55F in most areas while protected inlets in the South Sound and Hood Canal can rise to 70F in places. (Join Destination Group.)

Rob Casey is the author of "Stand Up Paddling Flat Water to Rivers and Surf" by Mountaineers Books. He also recently revised the 3rd edition of "60 Trips, Kayaking Puget Sound, the San Juans, and Gulf Islands" also by the Mountaineers to be released in summer 2012. He contributes regularly to the Stand Up Journal. Rob is based in Seattle and teaches SUP through his business, Salmonbaypaddle.com.