written by Stefano Gigli and photos by Daniele Mei

Three Italians adventured to the Gran Sasso mountains to stand up paddleboard in the lake of Campotosto. 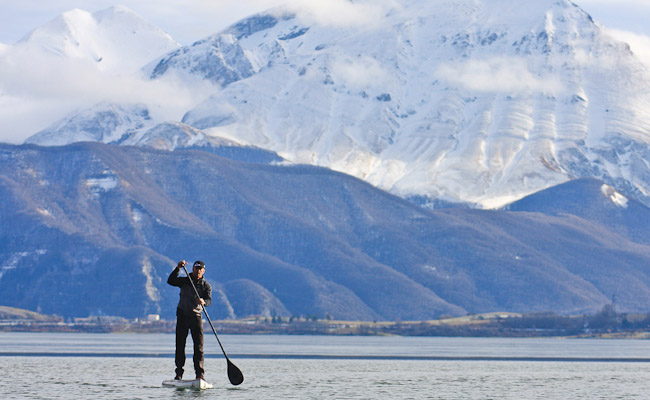 Italian stand up paddler overshadowed by Italy's "little Tibet" and trailing in a long track of history and tradition.

See all Photos from Lake of Campotosto.

ABRUZZO, Italy (December 30, 2010) – We had been dreaming for a while to go and stand up paddle (sup) in the highest lake of the Abruzzo region in Italy, looking at the Gran Sasso Mountains from a different perspective. The poor snow season got me off from my obsessive snowkiting activities and got me determined to organize a trip to the lake of Campotosto with three of my friends, Cori and Daniele Mei, plus Ira (Cori’s Jack Russel) who simply couldn’t miss the trip. (Join the Destinations Group.)

The Campotosto Natural State Reserve is situated in Abruzzo in the province of L’Aquila, Italy. During the Glacial era the basin had a Y shape and later became the valley in which the Rio Fucino now flows. The construction of the artificial lake gave it a V shape leaving only the top part of the former Y. The artificial lake was built between  1930 and 1940 creating three damns meant to power the power plants situated down the valley of Vomano. On the lakeside there are many sporting clubs for the many water sports that take place on the lake, with windsurfing as the predominant sport while sup board rentals were nowhere to be seen. It’s a pity! The place is stunning and a remarkable venue for stand up paddling.

The lake is the biggest artificial lake in Abruzzo. It is situated at 1,313 meters (4,300 feet) above sea level and covers an area of 1,400 hectare (3,450 acres). The weather was good to us and the water was only partially covered with ice for about 3/5cm thick. And the colors were spectacular. The contrast between the snowy mountaintops of the Gran Sasso and the bright red of the fallen leaves gave us the opportunity for some great photos and storyline, especially due to the creative lens of Daniele Mei, friend, adventure companion, and also photographer of many Ozone Italia adventures in the past years. (Read about Stand Up Paddling in Michigan.)

Dressed completely with mountain gear, long underwear, gloves, hat, waterproof boots and gore tex jacket, we fearlessly grabbed the paddles and went off in search of our Nirvana. There are many options on the tours to do by SUP which are also shorter than the 40 km of the lakes perimeter if you follow only one of the branches in which the lake is divided: Campotosto lake and Mascioni Lake, which are separated by a bridge called Ponte delle Stecche. The Ponte delle Stecche bridge crosses the tightest point of the lake and allows you to avoid going around the whole lake. Next to the modern bridge is also the older one. While going under it on our SUPs you could sense the history of the place.

To get to the lake you must follow the S.S. 80 from L’Aquila or from the Adriatic coast (Exit Assergi) up the Vomano River valley. About 2 hours drive from Rome to reach one of the beauties of our country. In our tour our attention was also attracted by the history and food culture of the village of Campotosto and its 700 inhabitants, or thereabouts. Since 1960 the people of this village have raised their own animals, like sheep and pigs, and make great cheese and meat like salami and sausages (I tasted them myself !!!). At the time the houses were built with clay stones which are very common in the area of Campotosto and Poggio Cancelli. You can still see the stones along the roads although many of the recent houses are built in a more modern fashion, covered with paint and less rustic. A bit cold and hungry from the trip we stopped at the local “Pecoraro” (shepherd) who makes great specialties like Abruzzo sheep ricotta, another special cheese and also special seasoned meat. All quickly eaten in the car!!! (Watch Sup TV Episode of Sup'ing in a Blizzard.)

I think that SUPing in this lake is a different and new way to live the beauties of nature. For someone who likes a bit less friendly environments in certain periods, far away from the city chaos and from the winter tourism stations, this location is a nice little view of the little Italian Tibet. The ice didn’t allow us to navigate the entire lake but this didn’t stop us from imagining  how it would be in the warmer seasons… and despite that, with a bit of energy and motivation, we loaded our boards on our shoulders and found some accessible spots to get to the lakeside and warm up our muscles.

If you stop and observe all the mountains around, the colors of the sky and the clouds and feel the life that fills this little paradise you realize that you’re not there alone but that you’re sharing this in perfect equilibrium with many other living creatures which are all protected species. In the reserve area there is a small community of about 110 units of the rare Abruzzo Chamois (Rupicapra pyrenaica ornata), reintroduced between 1992 and 1999. There are also other mammals like the wolf of the appenines, foxes, wild boar, dear, wild cats and also very rarely you can encounter the bear (Orso Marsicano).

There have also been some witnesses that have said to have seen the Lynx but it is not certain if there is a local population of this animal. There are also eagles, hawks, kestrel, peregrine falcon, eurasian eagle owl and the eurasian hobby. Some locals have also seen the great white Egret along the lakeside. But for sure the most interesting inhabitant of these mountains is the Abruzzo Chamois, which is found uniquely in the Abruzzo region, finding its main habitat under the Gran Sasso mountain beginning in the past century. For us this is what SUP represents, history culture and passion in visiting some of the beauties of Italy…..I forgot, anyone can do it ;-) We are already preparing our next adventure-trip on SUP but we prefer not to reveal our next location until we take off ;-) Follow us if you wish! End of first episode…… (Join the Destinations Group.)

What do you think of paddling an Italian Lake and eating Italian delicacies along the way?