You remember that guy on the stand up paddleboard last weekend who sat way outside and caught the best wave in every set? Don't be that guy. Follow the five simple Rules of the Water below. 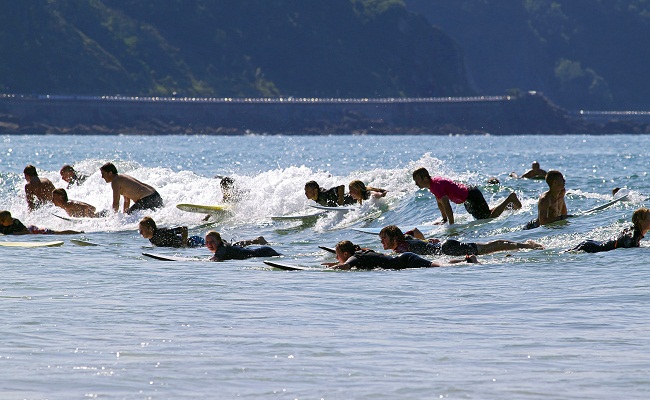 The United States Surgeon General recommends avoiding crowded lineups as they are hazardous to your health and to the safety of those around you.

Join the SUP Connect How To & Technique group to learn more useful stuff.

SANTA CRUZ, California - In a town where you are born with a surfboard in one hand, and a skateboard in the other, the surf culture in Santa Cruz California runs like a main artery through the heart of this small Northern California town.

When Stand Up Paddle Boarding arrived on the scene in the fall of 2008, the surﬁng population in this Northern California town gave the ﬂedgling sport about as much welcome as an outbreak of the Bubonic Plague.

For me surﬁng was “Nirvana,” and harking back I have no idea why on earth I would want to stand on a SUP while wielding a paddle in one hand. However I did, and even though I fell a thousand times, as I teetered back and forth on a pencil width soft top, the sport consumed me enough to never surf again on a regular surf board, a decision that really had no rhyme, nor reason.

Having surfed for over twenty years at most surf breaks throughout Santa Cruz, I felt over time I had garnished the respect of others, especially at my local break at Pleasure Point on the east side of Santa Cruz, as well as locations throughout the county.

Then add to the equation that I author the weekly surf column for the local Santa Cruz Sentinel newspaper, I believed that I was ﬁrmly entrenched within the surf community of this important small town in surﬁng lore.

Like it was yesterday, I remember the fateful warm August day that I proudly paddled out on my 11ʼ 6” SUP, amongst my friends in the lineup to show everyone this incredible new sport.

However, I recognized immediately that the welcome wagon was not out, and continued not to be out for about a year, and that if I was not riding a surfboard no one cared how entrenched I was, in fact, I was now quite the opposite.

Rather than give up and go back to regular surﬁng, I decided to take on a thick skin, which worked well in bouncing every derogatory remark written and spoken that I heard on a daily basis off into the sunset, and I continued to paddle surf making sure that I was respectful in using only the ﬁnest of etiquette.

The comments eventually dwindled, and as the months wore I stood quietly in the wings, and watched, as many of the “haters” themselves began to paddle board. The playing ﬁeld was becoming more level every day, I could only wryly smile.

We all have seen the sport spread like wildﬁre, with an ever increasing number of people learning to stand on a board for the ﬁrst time. Inevitably it leads to wanting to take to the waves now that many are ready to get off the ﬂat water, however, those not living at the coast are completely unaware of the rules of etiquette that are ﬁrmly in place, especially at the strong localized surf breaks that exist on the California coast.

Whose responsibility is it to tell someone new to the sport to pay heed to the rules of a surf break? Is it the paddle board manufacturer? Is it the retail outlet that sold the board? Is it the owner of the board? Or, is it mine, the fellow paddle surfer, should I run down the rules with him or her, before the “yard sale” in the line up?

From a personal stand point, I believe that it is the responsibility of the person riding the board. With that said, I strongly suggest that before you head out into any surf that you hone your skills in ﬂat water before ever surﬁng a SUP, show the surfer in the lineup that you can ride that SUP with conﬁdence.

Learn the etiquette of the local break where you are likely to paddle out at, and most importantly show respect to your fellow surfer out there by not paddling after every wave.

Like the expression says, “It is better to give, than to receive,” and by giving up some waves to the surfer, you will likely receive the “wave of the day” that you see on the horizon coming your way, and by then, you will have earned the respect to go ride it.

5 Easy Rules of the Water

About the Author
Neil Pearlberg, owner/founder of Santa Cruz Stand Up Paddle Board Company (www.supclass.com) that along with his son, Quinn, operates five SUP schools in both the Monterey and San Francisco Bay Area's. The schools have instructed many individuals, families, and corporations to the sport of SUP, and also offer three popular H2OYOGA weekly classes.

Neil is also the surf columnist for the Santa Cruz Sentinel newspaper, as well as being the coach of a local Santa Cruz High school surf team, and is the pioneer of the World's first and only dog show on water, the DogJam!

More in this category: « 4 Tips For Choosing The Right SUP Gear Stand Up Paddle Pilates - Half Roll Down »