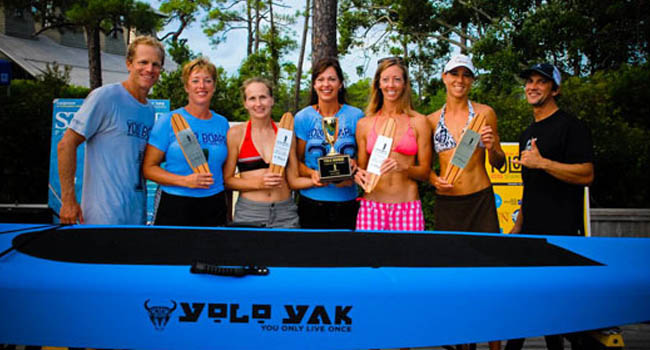 Grayton Beach Fitness made up of Shane Babin, Stefan Daiberl, Paul Hunter and Chris Ogle took first place in the Men’s Division, and the SoWal Lifeguard YOLO team of Justin Cook, Sean Hughes and Gary Wise were champions of the Elite Division. The first is of the ladies of the Unbalanced team receiving their award and the second is from the Elite Division race.

Just three weeks away is the YOLO Board Seaside Celebration from September 15th to the 19th in the community of Seaside, Fla, voted one of the top 12 destinations in the world by Frommers 2010.

The celebration will include four days of stand up paddleboard (SUP) inspired activities including special camps hosted by SUP celebrities Nikki Gregg and Chuck Patterson and both an Seven Mile Elite Race and a Three Mile Recreation Race in the Gulf of Mexico.  There will be a Silent Auction Fundraiser to benefit the South Walton Fire District Junior Lifeguard program and a free concert by HERITAGE in the Seaside Amphitheatre.

More in this category: « YOLO Board Stand Up Paddle Series Winners Yolo Board Winter Race Series »